I'm feeling great, y'all! And so far, not at all deprived. After all, the Reset & Restore plan — a 3-week whole foods-based, intuitive eating plan by Lacy Davis and Jessica Wilkins — isn't about restriction but, rather, about focusing on what makes your body feel good. The meal plans aren't required, but I'm choosing to follow them because I love a meal plan.

I started with an almond date roll at 5:30 a.m. before doing the first Rise & Resist workout video again! I did it yesterday (lots of body weight stuff and cardio exercises) before my run, and I was planning to go to the gym today. But I needed to be at work early, and I realized I could save time by working out at home. After my 30-minute video, I had this Tropical Smoothie from the meal plan — coconut water, mango, pineapple, banana, and kale. It called for spinach, but I had more raw kale to spare. Also added a scoop of Oriya Organics Superfood Protein Medley. 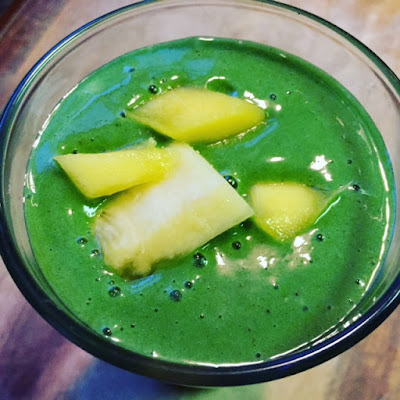 For some reason, that smoothie didn't stick with me as long as most do. I haven't used the Oriya powder in awhile, but maybe it lacks the stick-with-you-ness that Vega and Nutiva has. Anyway, that was fine because I brought some Lesser Evil Buddha Bowl Himalayan Pink Popcorn to snack on at work. This popcorn is probably the healthiest bagged option on the market — air-popped and lightly seasoned with coconut oil and pink salt. 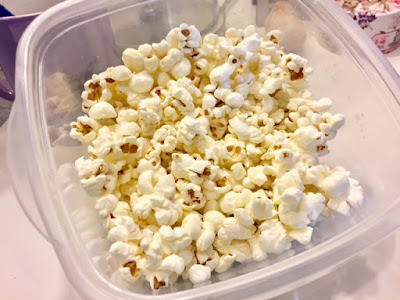 On Wednesdays, we have staff lunch meetings at work, so I packed my salad in a jar and dumped it into a bowl to eat during the meeting. This has a base of baby greens topped with brown rice, chickpeas, sauerkraut, and tahini. This is totally different than any salad I would have made on my own, but it was so good! Something about that tahini/sauerkraut combo is just phenomenal. 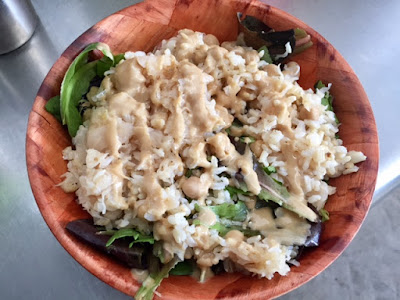 There were vegan cupcakes at work today, y'all! Talk about TEMPTATION! But I'm trying to avoid refined sugar during this reset, and even though my mind wanted one, I knew my body really didn't. Knowing that I COULD have it but choosing not to was much easier than telling myself I couldn't have it. I resisted, but I did get a sweets craving around 3 p.m. Instead of reaching for a cupcake, I had a medjool date, and that was just fine!

After work, I had to run by the vet's office and then straight to yoga, so I needed a hearty snack to power me through until dinner. Today's suggested snack was a small portion of leftovers, and luckily, I had a small bit of Blackeyed Peas & Cabbage left from New Years Day and a little sticky rice left from Monday night's Thai Bowl. The peas dish is just a can of blackeyed peas, a can of tomatoes, and some cabbage slaw sauteed in small amount of oil and seasoned with Cajun salt. 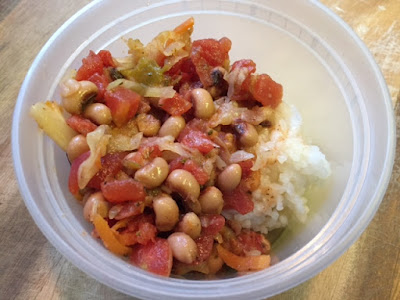 Dinner was a Cuban Bowl! I wish I'd done a better job plating so you could see everything, but instead, I smothered it in cashew cheese! The cashew cheese was a homemade version using Lacy's recipe (and I couldn't stop licking the Vitamix when it was done!). Rather than a base of grains, this bowl had a base of lightly sauteed plantains! Topped with black beans, sauteed peppers and onions, cabbage slaw, and that amazing cashew cheese! God, I love cashew cheese. 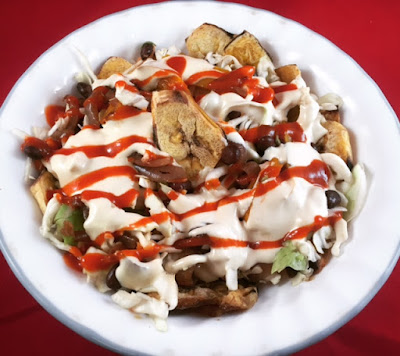 I need to try tahini and sauerkraut! Your dinner bowl looks delicious too!

Soooooo now dying to try both the Tahini/Sauerkraut salad and also that Cuban Bowl! I love Cuban flavors and that sounds AMAZING.

Anything with cashew cheese works for me!
The smoothie not keeping you full could actually be due to not having enough calories a day or two before if what my friend who is a nutritionist once told me. She said that a calorie deficiency over the course of a day or two can basically accumulate and then you have a day where you're just extra hungry because your body wants to balance that out-which i thought was really interesting.
Ttrockwood