Last month, my friend Susan and I went to Memphis' brand new IKEA store and dined on their delicious vegan meatballs. We loved them so much that we each bought bags of the frozen veggie balls to take home.

But then, about a week later, we both embarked on January reset plans while our meatballs stayed untouched in our freezers. Susan was also avoiding processed food, sugar, and gluten, and her reset ended on Wednesday. Mine ended last Monday. Throughout the month, Susan would send me random food texts — just words of foods that we were not eating. French fries, candy, Girl Scout cookies, mac and cheese, pie. And somewhere in there, she decided that, as soon as our resets were done, we should have an IKEA meatball party.

And so last night, we did! She said she'd make meatball subs and meatball pizza. I signed up for Swedish meatballs. And then somehow, we just kept adding foods to the dinner list, so we ended up with a totally international meal with Italian, Swedish, Chinese, and American dishes. Here are my Swedish Meatballs with IKEA Lingonberry Sauce. I made the creamy, white, mushroom sauce using this recipe on the Beyond Meat website. The lingonberry jam is from a jar I purchased at IKEA. 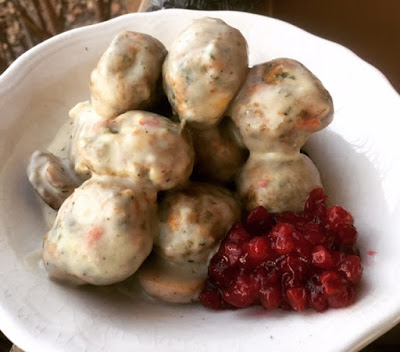 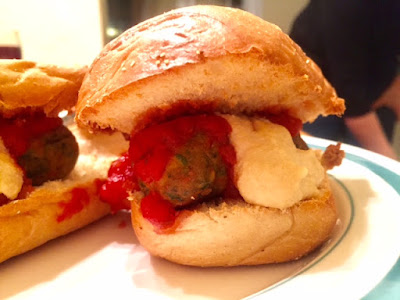 And she made Meatball Pizza! This had Daiya and arugula on a cracker thin crust. IKEA vegan meatballs are incredibly versatile and work well in all kinds of dishes! 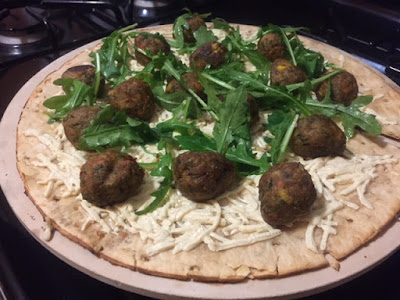 Saturday was the Chinese New Year, and I made a 2017 resolution to cook something from Isa's The Superfun Times Vegan Holiday Cookbook for every holiday this year. So I made these Cold Sesame Noodle Bundles. The noodles have a peanut-sesame sauce, and they're served in romaine leaves. You're supposed to tie them up with scallions, but the scallions kept breaking so I just chopped them and topped the bundles with them instead. 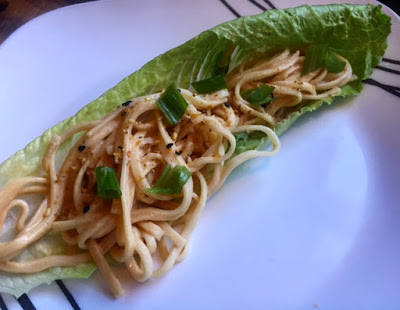 Susan made the yummiest Buffalo Cauliflower and served with Hampton Creek Just Ranch. These were very spicy and crispy, just the way I like 'em. These would be perfect SuperBowl food! 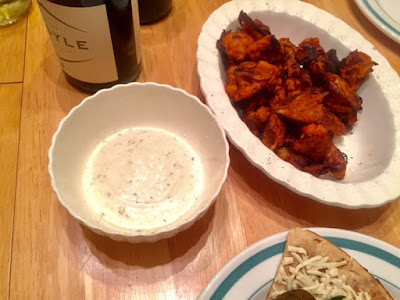 I wanted to show off my new air fryer, so I brought it over to Susan's house, and we made Air-Fried Tater Tots! Tots do so well in the air fryer! They taste deep-fried! We were going to make onion rings too, but we wised up and realized we had plenty of food. 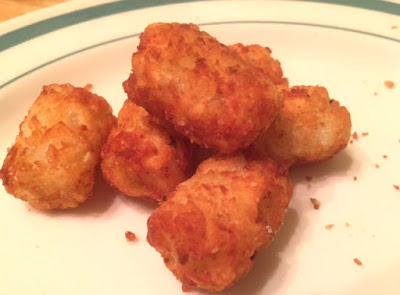 Susan asked me to make peanut butter chess bars, but I couldn't find a vegan recipe for those on the internet. In fact, I could only find ONE vegan recipe for chess bars at all (not peanut butter ones)! And that recipe seemed a little sketchy. Chess bars have a lot of eggs, and converting a traditional recipe sounded like too much experimentation for a Saturday afternoon. So rather than experiment and have it fail, I asked my friend Stephanie for her recipe. She sells her chess bars at Imagine Vegan Cafe, and they're soooooo good. She told me she'd have to kill me, but she'd share if I PROMISED to never share with anyone else. So I swore on my life! The Chess Bars came out great! I considered adding peanut butter, but I was afraid it might mess up Stephanie's perfect recipe.

By the way, chess bars are totally a Southern thing. If you're not familiar with them, they're basically soft cakey bars topped with a sweet gooey, buttery topping. 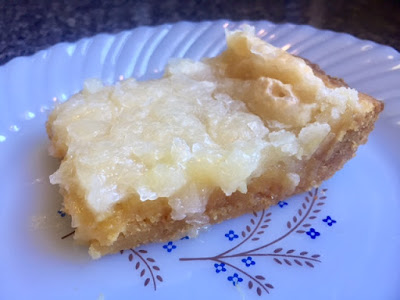 Yay for Meatball Party!! We ate so much, and it was such fun!
Posted by Bianca at 2:19 PM

Omg, I had never heard of a chess bar, let alone ate one, before moving to memphis and going to Imagine. Stephanie--they are to die for! I've never tried the ikea Swedish vegan meat balls... Will have to get on that ;)

Is there a recipe for that cauliflower floating around out there somewhere???? I must have it.

Looks like a fun and delicious party! I've never heard of a chess bar, but they look amazing!

How fun! I love the wide array of treats, and I completely agree that tots are amazing in the air fryer. My tot consumption has gone way up since Christmas.

Oh wow! Thanks for the info on Ikea! Wished their cinnamon buns were vegan They smell so good!

I have not heard of chess bars before, they sound pretty great.
What a fun ball (heh) party. I have an Ikea near me, but haven't been to get balls (heh) yet. But good to see that they are so versatile!

How fun! What a great variety of dishes too! I'm really obsessed with the 365 brand meatless balls from whole foods lately, they're surprisingly cheap (like $4 for a bag of five servings!) and really delicious. That sauce for the swedish meatballs is in my very future! I even have ligonberry jam!
Ttrockwood