Another weekend recap! I'm on Day 14 of my 3-week Reset & Restore program of whole foods, limited refined sugar, and no gluten. All of the meals I'm eating are made using recipes by Lacy Davis, and throughout the program, I'm doing workout videos by Jessica Wilkins. This weekend was smooth sailing! I did get a little refined sugar treat in though, but more on that in a few.

Friday morning started with bootcamp at my gym. It was a TOUGH class with lots of squats, burpees, plyometrics, and free weights. The one thing that pushed me through was knowing that, as soon as I got home and showered, I could eat this delicious Savory Breakfast Pancake. This is Lacy Davis' spin on traditional Indian pudla — a chickpea flour pancake topped with savory goodness. Mine was topped with sauteed squash, zucchini, and peppers and a drizzle of cashew cream and salsa verde. I've long had a love for pudla, and I'm not sure why I don't make this ALL THE TIME. 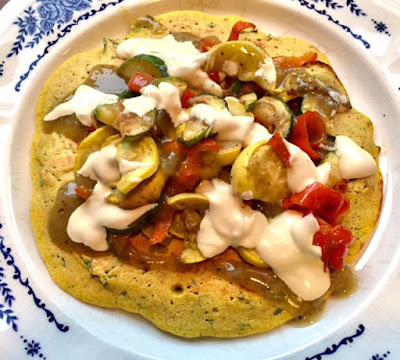 My morning and afternoon snack at my desk was Coconut Oil-popped Popcorn with Nooch. I made a big ole bowl of it to bring to work, and I snacked on it throughout the day. 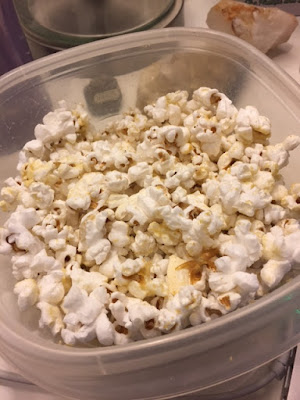 Lunch on my meal plan Friday was a DIY Giant Salad with whatever I wanted on it. The key was to make sure and include some carbs, proteins, and fats. So mine had romaine, maple baked tempeh, brown rice, steamed broccoli, sliced bell pepper, sliced raw mushrooms, and a homemade lemon-tahini dressing. 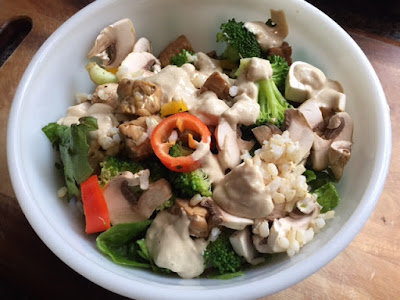 Dinner was a gorgeous, steaming bowl of Lacy's Ratatouille with Steamed Kale & Brown Rice. This ratatouille was some of the best I've ever had. Tender eggplant and peppers with the tang of balsamic vinegar! It was just perfect with the greens and grains. 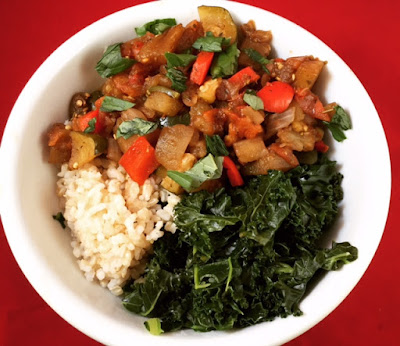 After dinner, I stopped by Imagine Vegan Cafe for their grand re-opening party. Imagine moved to a new location (just down the street from their old location and next door to their original place) a couple months ago. This is their third move since they opened in 2011, and it's by far the coolest (and largest) space they've had. Yet it was so packed for the party, and there was a long waiting list for a table. I hadn't planned on dining in, but I had planned on grabbing a quick treat! For at least a week prior, I'd been dreaming of having a Vegan Soft Serve Cone there at the opening party. So I did! Imagine just got a soft serve machine, and they're serving Chicago Soy Dairy's Temptation Ice Cream. It's sooooo good and surprisingly very low-cal. 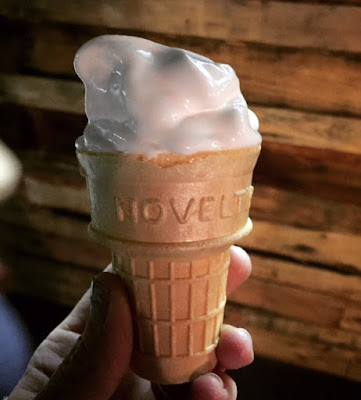 I know I said I was avoiding refined sugar, but this reset program revolves around intuitive eating. And that means letting yourself have a treat every now and then if you really want one. After two weeks without a serious dessert, my intuition was telling me to eat that ice cream cone. And it was delicious. :-) I didn't hang around long after eating the cone though since they were so busy. Plus, I had to meet up with friends at Billy Hardwick's All-Star Lanes for my friend Shara's 34th birthday bowling party. I considered getting a little wine at the bowling alley, but I talked myself out of it, opting for coffee instead. I figured ice cream was enough of a treat for one night.

Besides, I had a long run planned for Saturday morning! My training plan had me doing 14 miles Saturday. So I woke up early and enjoyed a bowl of Pumpkin Pie Oats with Almond Butter (made with Trader Joe's canned pumpkin, maple syrup, and pumpkin pie spice). And then I headed out to the Shelby Farms Greenline to get in those miles. 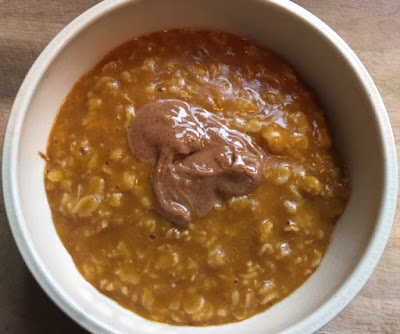 Post-run, I had some Vega Sport Mocha Performance Protein mixed with a little almond-cashew milk. And then I heated up some leftover ratatouille with brown rice and kale. That held me over for several hours, but later in the afternoon, I snacked on some Apples with PB2, a banana, and some coconut oil popcorn while watching Empire and Sense 8 on Netflix. PB2 (the low-fat peanut butter powder that you mix with water) is weird on sandwiches, but I love it for fruit dip and mixed into smoothies and oats. 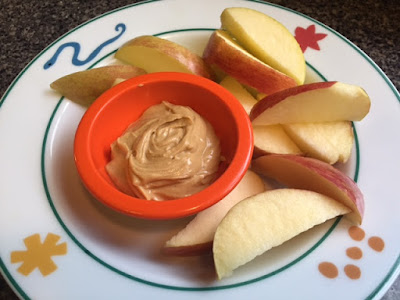 Dinner on my R&R meal plan for Saturday was "eat out with friends"! So I met up with my friends Andy and Mike at Zaka Bowl for a healthy vegan bowl. I chose Zaka Bowl — a build-a-bowl restaurant — because it's a totally vegan place where I know I can get one of the healthiest meals in Memphis. Everything there is totally on-board with my reset program, so I could go wild! My bowl had garlic olive oil quinoa, baked tofu (double portion!), roasted herbed cauliflower, roasted carrots, sauteed bell peppers, cherry tomatoes, pineapple salsa, sesame soy sauce, and creamy avocado sauce. 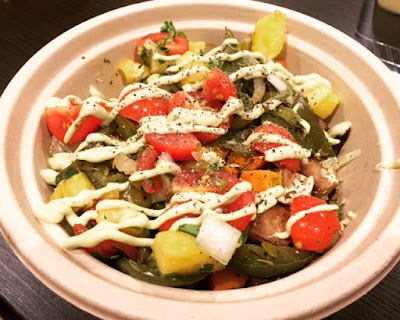 After dinner, Andy and I joined a few more friends at The Pumping Station, my neighborhood gay bar, for a couple glasses of wine. I'm allowing myself a few glasses per week but nothing crazy. So I had my wine and went home around midnight like a responsible adult. Andy and crew, however, stayed out until 4 a.m.! Glad I went home!

On Sunday morning, I slept in until 9 (that's late for me!) and then made Lacy's Flourless Thai Pancakes in my PJs. These were totally gluten-free coconut-ginger pancakes, and they were AMAZING. You'd have never known they were gluten-free. I covered them in maple syrup and enjoyed these while watching more Empire. 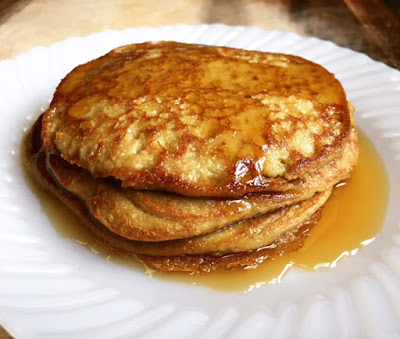 Lunch was the last of the ratatouille with more kale and some quinoa. And then later in the day, I snacked on Celery & Spinach Hummus while I cleaned the house. I also had a small cup of KeVita Tart Cherry Kombucha. 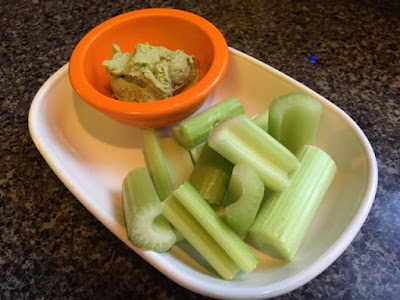 I had a little chocolate craving in the afternoon, so I reached for a piece of Addictive Wellness Raw Chocolate, which is sweetened with stevia and loaded with superfood powders. It's also raw, so basically it's as healthy as chocolate can get. 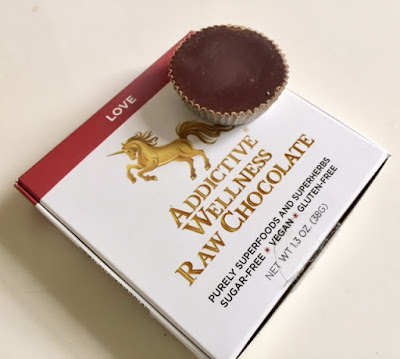 Finally, there was dinner! And it was so yummy! I made yet another Lacy R&R recipe for Hasselback Japanese Yams, Lentils, & Steamed Broccoli. 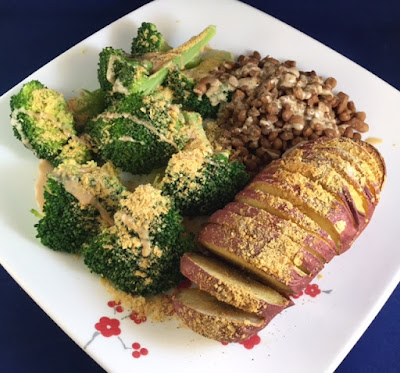 This was my first time trying Japanese yams, and I was blown away. They're very similar to a sweet potato, but the flesh is white, not orange. And they're slightly sweeter and a little starchier. This one was baked with olive oil, salt, and nooch. And then the whole plate was sprinkled with more nooch and drizzled with tahini. Such a hearty and healthy meal!
Posted by Bianca at 9:11 PM

I love Pudla so much! That's the reason I had chickpea flower, and now that I have two reasons to use it!! Your food all looks so delicious, especially your DIY salad and Zuka bowl!!

That salad looks epic. I would totally eat that! I would't say no to those pancakes either.

I am impressed by the variety this meal plan has.