Stuff I Ate After the Reset!

Well, my 3-week Reset & Restore program has come to an end! I've done some sort of reset/cleanse/detox/whatever every January for years, and some years, I'm counting down the days until I can have cupcakes and veggie dogs and pizza. Other years, I'm a little sad to see it go. This would be the latter.

I really enjoyed these last three weeks of eating (mostly) only whole foods, very little sugar, no gluten, and limited booze. I've been stuffing my face with wholesome grains and veggies and fruits, and other than a couple days of gassiness (thanks, beans!), I've felt fantastic!

That said, I have missed bread. And dessert. So going forward, I plan to add those things back in, but I'm hoping to strike a nice balance between super-healthy meals and fun, junky processed treats. I'd like to eat the R&R way most days of the week with an occasional meal of plant meat or white bread and an occasional ice cream sundae or slice of pie. I'll add my usual dark chocolate squares back in daily, and most of the time, my breads will be whole grain or sprouted grain. Thankfully, my body handles gluten like a champ.

For my first day back to eating whatever I want, I treated myself to a little (okay, a lot of) sugar and bread and processed delights. But I tried to find some balance with a Lacy/Reset & Restore meal and salad for lunch and fruit for an afternoon snack. My day started with a four-mile run, and rather than have a date (what I would have had during the reset), I treated myself to a Cascadian Farms Peanut Butter Granola Bar. I bought a ton of these on clearance before the reset, but I had to wait and eat them because they're high in refined sugar. 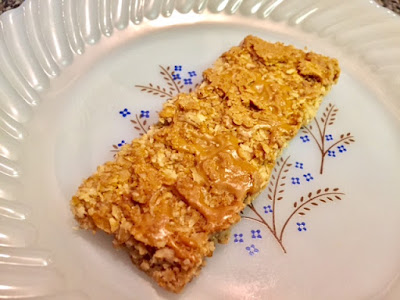 Of course, sugar is actually ideal for pre-run/pre-workout because it quickly converts into energy that you can use!

After my run, I had one of my favorite breakfasts — FitQuick! I didn't have any FitQuick protein waffles or doughnuts during my reset because, even though they're gluten-free, they do contain sugar. But I was glad to have it back in my life. This morning, I made the Vanilla Sprinkle Pronuts and covered them in Vanilla Maple Frosting Fluffbutter and S'mores Fluffbutter. I plan to do a full review of Fluffbutter soon. It's protein-packed, dessert-flavored nut butter! 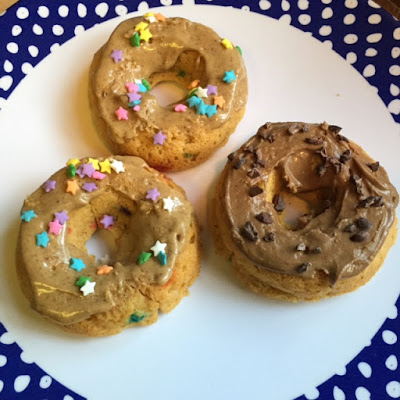 For my morning snack, I had a few Earth Balance Vegan Cheddar Crackers! At work, our gallery director orders amazing snacks to stock in the break room, and she always makes sure some of the snacks are vegan. She ordered these crackers — which have long been my fave — last week, but I couldn't eat any until today! So good. 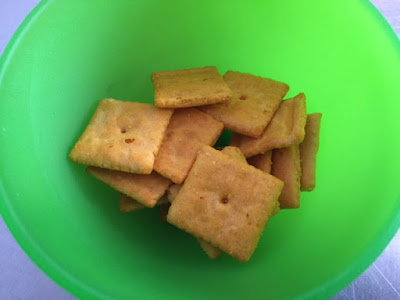 My lunch was a healthy, wholesome meal. I had leftover Vegan Kale Quiche from Reset & Restore, and a Side Salad with Smoky Hummus (in lieu of dressing). It's all about balance, y'all. 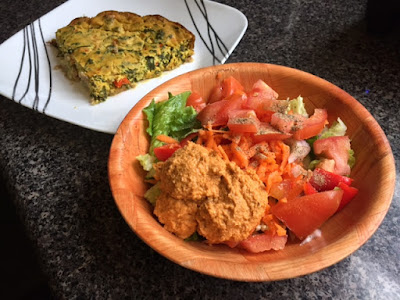 In the afternoon, I had some masala chai with almond milk and stevia and a satsuma. But then at dinner, it was time to let loose! I met up with Stephanie, Pam, and Mike at Imagine Vegan Cafe so I could finally quell those pizza cravings! I ordered a Diamond Bear Oatmeal Stout, my first brew in three weeks. Even though I allowed myself wine on the reset, I really missed beer. Beer is kinda of my thing. And nothing beats a good oatmeal stout. 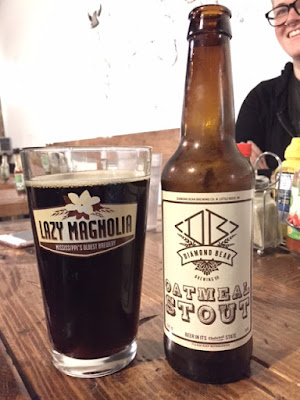 Imagine has pizza by the slice now, and tonight, they were offering a Philly Cheezesteak Pizza with vegan beefless tips, sauteed peppers and onions, mushrooms, vegan cheddar, and mozzarella. I got two slices (and then owner Kristie gifted me a bonus slice for leftovers just because!). 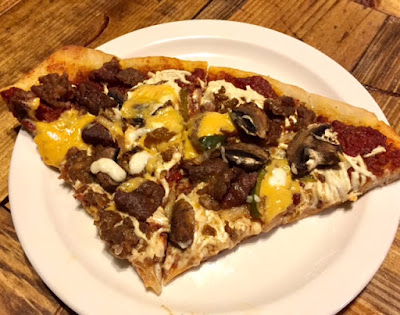 The special for the night was vegan chimichangas with a side of Jalapeno Poppers. They sounded amazing, but I opted for pizza because I knew my body probably wasn't ready for a giant plate of fried everything. But I was dying to try those poppers, so they brought out a small plate for us to sample. These were like hush puppies but with jalapenos and vegan mozzarella. 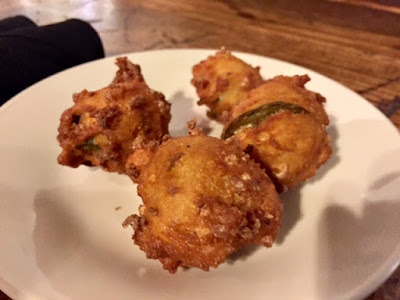 And I still had to save room for dessert!! Behold the Bianca Sundae! Yes, it's named after me. And it's awesome. Peanut butter/Oreo brownie topped with vegan soft serve, chocolate syrup, and nuts. 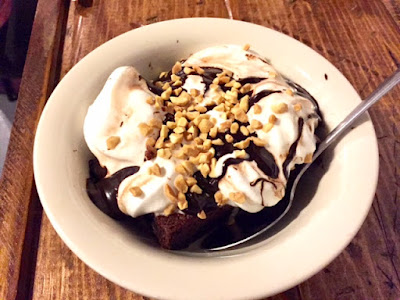 The pre-reset Bianca would have probably hoarded the entire thing for myself. But I knew that after beer and pizza and poppers, I didn't really need an entire dessert on my own. So I shared it with Stephanie. That's what friends are for, right?

Tomorrow, I'm back on a healthier eating wagon (but I do have that leftover pizza now)! I'll do another Stuff I Ate check-in later this week with a more average round-up of meals. Today's indulgence doesn't accurately reflect how I'll be eating all of the time!
Posted by Bianca at 9:35 PM

Oh man that pizza looks out of this world!! And hush puppies with jalapeno and vegan cheese sound like the best thing ever!!

Ooooh yum!! That pizza! And your namesake sundae looks incredible, you should definitely be proud to have your name attached to that beauty :) Great job on the detox, I always enjoy following your January cleanses!