Still going strong on Lacy and Jessica's Reset & Restore, a 3-week intuitive eating plan with a focus on whole, vegan foods! I'm following the basic meal plan this week (and the more advanced meal plan next week). That means every day this week has been a smoothie or oats in the morning, a salad at lunch, and a bowl for dinner.

This morning, I woke up, snacked on an almond date roll, and hit the pavement for a very cold four-mile run. I was so thankful to have this bowl of hot Athlete's Oats waiting for me when I returned. I made this as overnight oats and just warmed in the microwave before eating. It's oats, Nutiva chocolate protein powder, PB2, chia, flax, maple-agave syrup, and a fresh, diced Braeburn apple. Very filling! 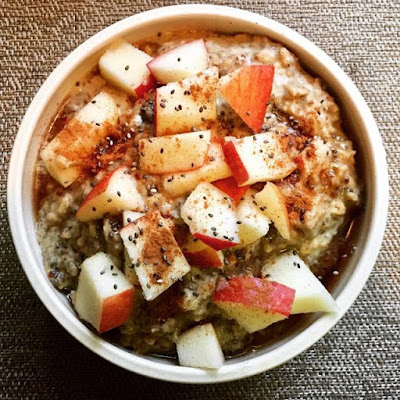 In fact, it held me over so long that I wasn't hungry for my morning snack until 11:15 or so. I'm usually hungry by 10:30. Today, that snack was Carrots & Almond Butter. It's a combo I've had before but forgotten all about, and I love it. Need to eat this more often. 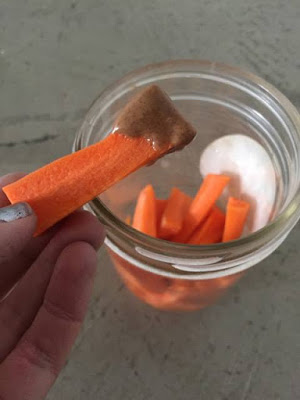 Since I had my snack so late (and since the almond butter was pretty filling), I waited until 1 p.m. to take a lunch. I'm trying to get better about listening to my body's hunger cues rather than just eating at a set time. Lunch was a Cuban Salad — very similar to last night's Cuban Bowl! — with baby spinach, fried plantains, black beans, sauteed peppers and onions, and a cashew cream dressing. I loved last night's bowl (it had cabbage instead of spinach), but I think I liked this combo even better. 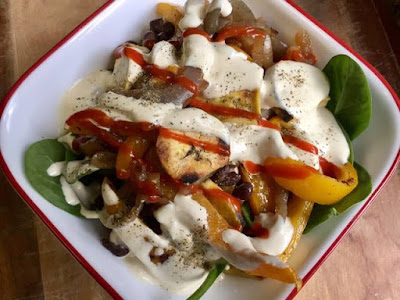 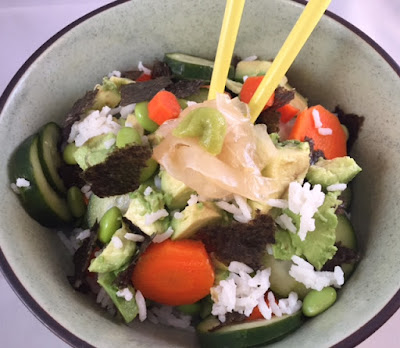 I love sushi in bowl form because I feel I'm eating way more than when I'm eating rolls, even though it's probably about the same. Also, I made the pickled cucumbers and carrots from scratch, so that was extra special. I probably put too much wasabi in this (my nose was BURNING!), but I love the taste despite the burn. A few of the recipes on this Reset call for white rice, rather than brown, and that makes me very happy. White rice gets such a bad rep, but it's really quite alright. Maybe it doesn't have ALL the nutrients that brown has, but it's not a bad food.

In fact, nothing is a bad food (except maybe animal products because those are just cruel), and that's what this reset is all about. It's about making healthy choices without demonizing foods. It's about tossing out silly phrases like "clean eating." It's about listening to your body and filling it with things that nourish.

So, on that note, I was at my friend Shara's house tonight, catching up on American Horror Story: Roanoke, and she made popcorn and some cute Zucchini Pizza Bites. 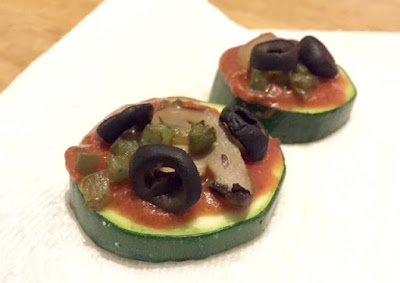 Shara left the cheese off some bites for me! And my body was saying, "This is super-healthy! You should eat it!" So I had a few bites of popcorn (oil-popped on the stove) and four or five zucchini bites. They had marinara, olives, and mushrooms and tasted very pizza-y. I'm totally stealing this idea for a future party food appetizer.

Okay, y'all! We're heading into the weekend, so I'll be taking my usual Friday and Saturday off blogging, but we'll catch up on all the yummy reset food on Sunday night!
Posted by Bianca at 10:19 PM

I so agree about white rice! I like brown rice in some dishes, but more often than not I want Jasmine rice with my meals. Your sushi bowl looks delicious. I always use too much wasabi but the burn is so worth it!!

I agree with you about white rice! Plus (in my opinion) it's SO much yummier than brown rice. I don't care how controversial that is haha