On Monday, I posted a round-up of all the delicious things I ate the day after my 3-week Reset & Restore intuitive eating program ended. But of course, that post was filled with pizza, ice cream and brownies, fried things, and beer. After any sort of January reset, I always like to have a big ole crazy celebration meal.

But I wanted to check in and show y'all what I've been eating over the past couple days because these meals are more reflective of how I plan to eat most days going forward after the reset. My hope is that I'll find some balance between indulgent foods and super-healthy, whole foods. For example, if I know I'm going to have pizza at lunch one day, I'll try and have a very veggie-packed dinner. I'm also trying to eat plenty of nutritious snacks and limit big desserts (like cakes, pies, Oreos) to a couple days a week. On other days, I'll go for a square of dark chocolate or a piece of candy.

On Tuesday morning, I had a six-mile run planned, so I woke up and had a Cookie Doughpness Picky Bar (cinnamon raisin) made with peanut butter, dates, currants, and walnuts. It was early and I failed to take a picture. After my run, I had my new favorite breakfast of Warm Oats Over Banana N'ice Cream. This time I added chocolate protein powder to the banana soft serve and drizzled the whole thing with a sauce made using PB2 peanut butter powder. Mmmmmm. 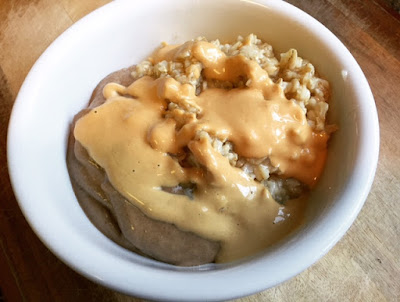 My morning snack at work was more Earth Balance Vegan Cheddar Crackers. I cannot get enough of these! 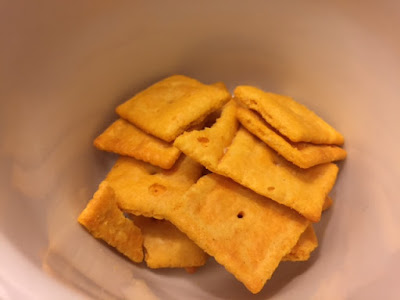 I had a leftover slice of Imagine's Vegan Philly Cheesesteak Pizza that I needed to eat, so I had it for lunch with a side salad (using hummus in place of dressing). This was a nice way to balance a not-so-nutritious (but very delicious) food with a very healthy one! 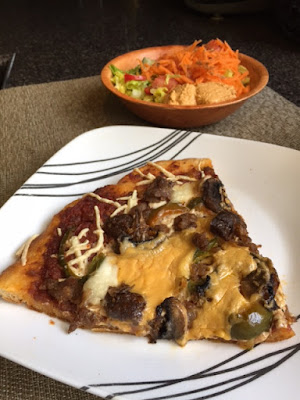 I had a little Brew Dr. Clear Mind Kombucha (with herbs designed to help you focus!) at my desk after lunch. I usually don't have much in the way of afternoon snacks because lunch usually keeps me satisfied. But I had a board meeting after work, and I knew I wouldn't get a real dinner until at least 8 p.m.! So I had some Vanilla Roast Almonds and a Tropical Fruit Strip before the meeting. These are snacks that I found in the office. My office always stocks the best snacks! 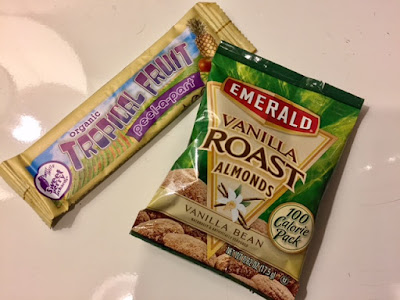 After work, I had about 40 minutes to run home and feed the pets and freshen up before my 6 p.m. meeting. So while I did those things, I snacked on some Treeline Herb-Garlic Cashew Cheese and Chili Sauce with Smokeouse Nut Thins, Water Crackers, and Melba Toast. My co-worker Tom made the chili sauce and gifted us all jars for Christmas! So good on crackers! 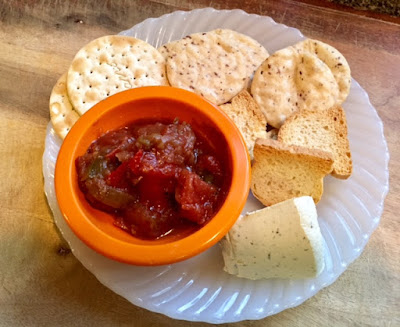 My meeting let out around 8 p.m., and while I was hungry, I wasn't HANGRY. The nuts and crackers and cheese and fruit held me over pretty well. Rather than have a giant meal right before bed, I settled for some Carrots & Celery with Smoked Paprika Hummus & Sundried Tomato Hummus. 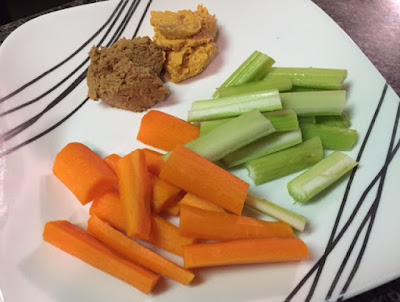 And that was it for Tuesday! On Wednesday mornings, I usually go to the gym for Butts & Guts class, but I needed to be at the office early this morning. So I did one of the Reset & Restore workout videos at home. That saved me about 30 minutes! Before that workout, I had a Cascadian Farms Crunchy Peanut Butter Granola Bar. I have to have a small snack before my morning workouts because I always wake up hungry.

After the workout, I had an Ozery Bakery Cranberry-Orange Morning Round with Go Veggie Cream Cheese and an organic Gala Apple with Grape PB2! See that balance here? Gluten-y refined flour thing with fatty topping meets fresh fruit with low-fat peanut butter. 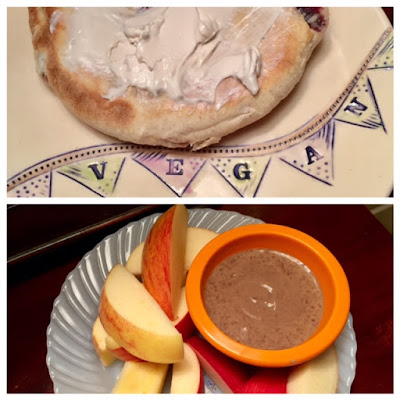 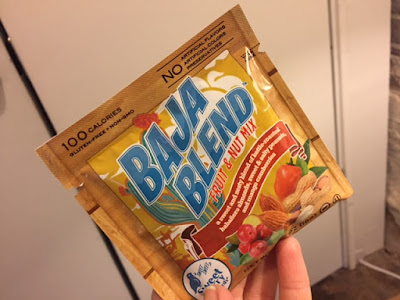 On the last Wednesday of every month, my office orders lunch for our staff meeting (on the other Wednesdays, we just bring our own lunches to staff meetings). Stacy, the woman who orders lunch, is vegetarian, and we have a number of other vegetarians in the office. And she always makes sure there's a vegan option! Today we had a build-your-own taco bar! I made a giant Taco Salad with black beans, jicama, salsa, guacamole, pico, cilantro vinaigrette, white rice, and a couple crumbled tortilla chips. I stuffed some of that salad into a flour tortilla. 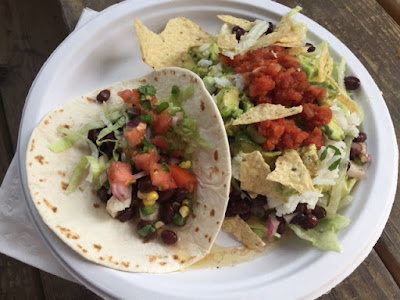 Before the reset, I would have probably filled two tortillas and then made a giant pile of nachos. Instead, I made the salad the focus but treated myself to a tortilla because I love tortillas!

Later in the day, at my desk, I had more Clear Mind Kombucha, a small piece of Chocolate Hollow Hazelnut Truffle Log, and some herbal Rose Tulsi Tea. I go to yoga on Wednesday nights, so I snacked on some more Treeline Cashew Cheese with Smokehouse Nut Thins before class. I don't like to eat a full meal before yoga.

Then it was dinner time! As I mentioned in Monday's post, I'm currently working my way through a ton of homemade hummus from my friend Diane. So I made a Hummus & Veggie Sandwich using smoked paprika hummus, bell pepper, cucumber, tomato, and grated carrot. The bread was a delicious herbed loaf that my mom gave me right before the reset. I froze it since I was going off gluten for three weeks. It thawed beautifully! On the side, I made Kale Chips in my air fryer! 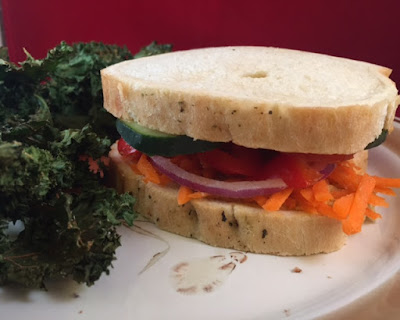 I plan to do a whole post on my air fryer soon, so I'll go into more detail about the chips then. But let me tell ya, these kale chips were so perfect and crispy. Plus, they were a way healthier side than potato chips. I'll still be eating potato chips and tortilla chips sometimes, but since I'd already had crackers and a few chips at lunch, I figured kale was the smarter choice for dinner.

So this is about how I'll be eating going forward. I will be cooking some more complex dishes of course! Just going through a snacky hummus/crackers/cashew cheese phase right now.
Posted by Bianca at 9:59 PM

You are SO lucky your office has snacks! And really fantastic snacks too!! My office has.... plastic silverware and stray soy sauce packets and dairy milks for the godforesaken crap they call coffee.
Anyways, do you feel a difference in your energy level between the gf no sugar reset and the few days afterwards with gluten and some sugar? I know i could never go gluten free completely but I'm always trying to balance what meals and what foods when in the day work best.
Ttrockwood

I saw Treeline scallion cashew cheese on clearance for $1.99 yesterday at Smith's and just had to get it. It's usually eight dollars! It is seriously addictive and so delicious!! It looks like you're definitely finding a good balance after your reset!!

Great looking meals! I love the balance of the healthy whole foods with some processed yummy things too. It's definitely the way to go. I love the banana nice cream with warm oats. Putting hot and cold together is my favorite. Banana nice cream on a hot waffle is also pretty amazing :)

Can I just say how impressed I am by your ability to limit yourself to just a few of those earth balance cheeze crackers!? I'd eat the whole darn box :/