When I set my New Year's goals — yoga streak, train for a 50K race, eat the rainbow of foods as often as possible, take an online class every two months, finish KonMari-ing my house, and foam roll once a week — I set up a point system where I give myself a point every time I do a habit in pursuit of those goals. After every 100 points, I get a reward! This past weekend, that reward was Vegan Mozzarella Sticks from Imagine Vegan Cafe! 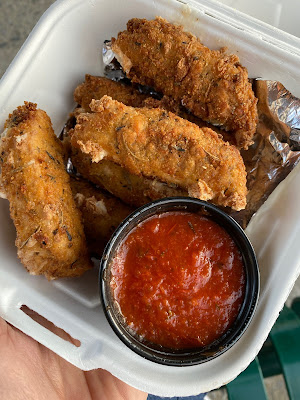 I love their handbreaded vegan cheesesticks, but I rarely order them because a meal of fried cheese just doesn't seem like something I should do often. But I earned these. I enjoyed them outside on a bench outside the cafe (they're still doing takeout only), and I savored each bite. 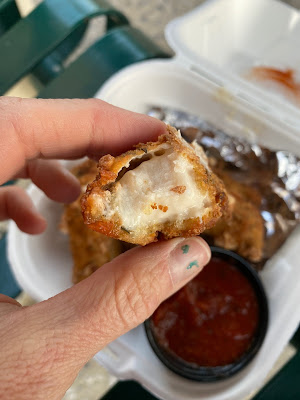 I recently made the Buddha Bowl from the No Meat Athlete Cookbook. This has brown rice, the best marinated tofu, avo, carrots, mixed greens, bean sprouts, kraut, Korean BBQ sauce (SO GOOD!), and sesame seeds. I love these kind of meals! 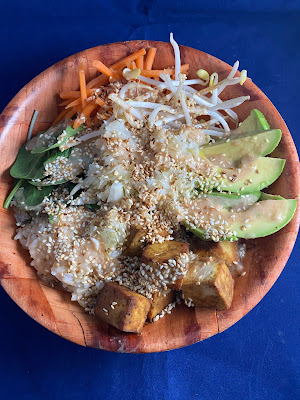 And here's a not-so-healthy quick lunch! I had some Simple Truth Black Forest Ham on a sandwich with Miyoko mozz, kraut, lettuce, and dijon and a side of IWON Sweet Dijon Protein Stix. 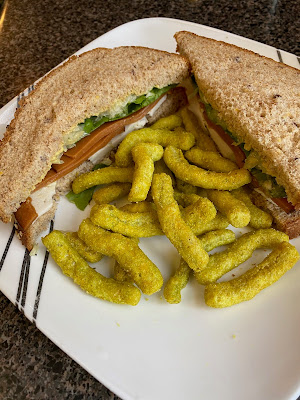 I've been having fun creating new recipes for a cookbook project that may never see the light of day! Ha! I needed a reason to get creative in the kitchen, so I've been playing around with vegan fitness recipes. For the post-run protein section, I want to include lots of protein-heavy, whole foods-based dishes, like this Tempeh & Bok Choy Stir-fry that I whipped up with bok choy from my CSA and some mung bean sprouts. I use the leftover tempeh marinade as the stir-fry sauce so you don't waste anything! 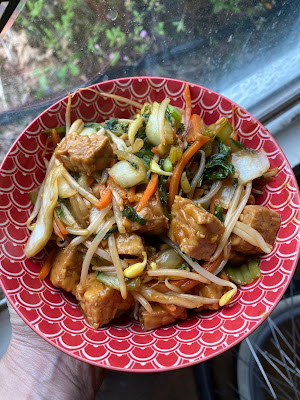 I've also been having fun with new ideas for pre-run bagel spreads. Before a 14K trail race on Saturday, I made some Avocado Everything Spread with fresh avocado, everything salt, and nooch. Perfect amount of fat and carbs for a long trail race. 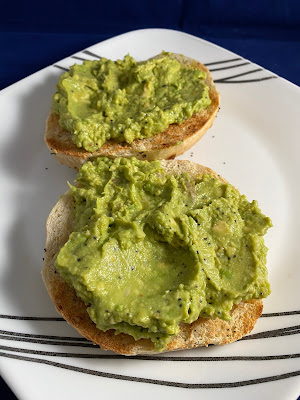 And here's a recipe I didn't create! I've been having fun with Cheap Lazy Vegan's e-cookbooks, and I love this Mug Scrambled Tofu. You just add the veggies, spices, and tofu to a mug and microwave it for four minutes. Tastes just as good as if you'd cooked it in a skillet. 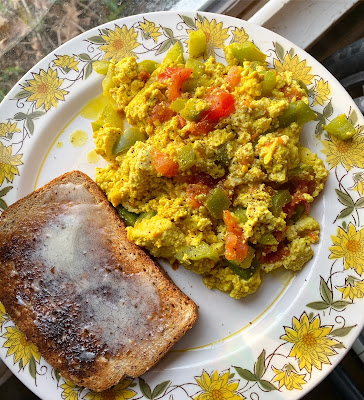 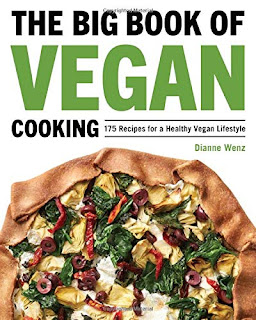 I've been blogging since 2007, and along the way, I've made a bunch of awesome vegan internet friends, mostly other bloggers and cookbook authors. Dianne Wenz of Dianne's Vegan Kitchen is one of those! I've internet-known Dianne for a long time, and I was very excited when I heard she had a new cookbook out! The Big Book of Vegan Cooking is, indeed, a very big book of vegan cooking. It's nearly 300 pages, and it's a pretty large-sized book in both width and length. Inside, you'll find 175 healthy vegan recipes.

Dianne covers all the bases here with breakfasts, snacks, salads, sandwiches, bowls, vegetable mains, bean/grain mains, pasta dishes, desserts, and sauces. The recipes are simple and call for mostly whole foods. When the recipes refer to other recipes in the book, such as a sauce or homemade plant meat, there's always the option to include a storebought version of that thing (i.e. Dianne's Chic'un Patties or storebought vegan chicken patties). I love recipes like that, because sometimes, I want to be lazy, and sometimes, I want to go all out and make all the things.

I made two recipes from the book. First, the Tofu Rancheros. This savory breakfast dish features a tomato-heavy tofu scramble that's seasoned with chili powder and nooch and served with warm corn tortillas. Perfect for a fancy week day breakfast or a lazy Sunday brunch. 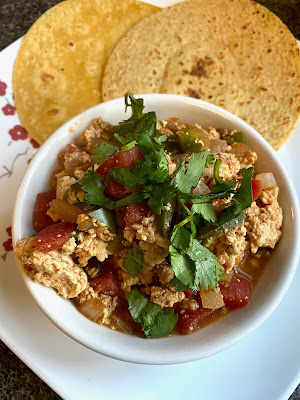 Last week, I tried the White Bean Shakshuka. This was in the Spill the Beans chapter on bean and grain mains, but it doubles as a breakfast option since it's based on the traditional North African shakshuka breakfast. 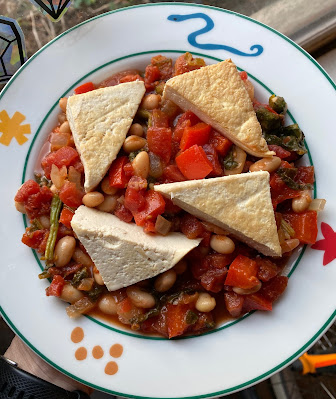 Pan-fried tofu stands in for the eggs that are traditionally included in this dish. They're served over a bowl of white beans with tomatoes, bell pepper, spinach, and lots of spices. I love a whole foods-based dish like this! So satisfying!

Last night was Taco Tuesday at Global Café, and they were slammed! I usually order online and then show up just in time to pick up my food. But I decided to order in person, thinking I'd be home with tacos in thirty minutes or less. But orders were taking much longer last night. Luckily, I ran into some friends in the ordering line, so we got our $2.95 margaritas and sat outside on the patio while we waited for our tacos. It was nice to hang out with people for a bit! I'm so glad spring is here, so we can safely gather outside! It almost felt like 2019 for a minute.

I didn't take any pics of my Black Bean Tacos with Avocado when they were fresh, because I was so hungry by the time I got them that I pretty much inhaled two right away. But I saved two for lunch today, along with leftover chips and garlic-habanero salsa. These tacos are SO GOOD. I don't know how they season their black beans, but they taste like magic. And that salsa is so spicy and tasty! 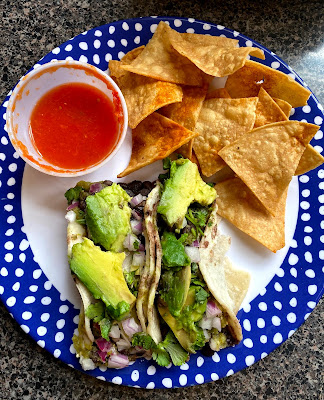 I've been enjoying Hummus & Veggie Wraps for lunch this week, along with IWON Sweet Dijon Protein Stix. I found these crunchy snacks on clearance at Kroger, and I wish I'd bought all the bags. They're so tasty! 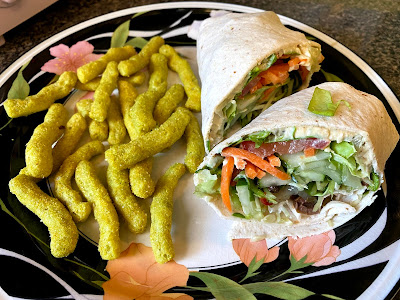 And here's a recent Boca Chicken Sandwich with Miyoko mozz and some Air-fried Fries. I'd been craving British-style malt vinegar fries, so I doused these babies in vinegar and served with ketchup. 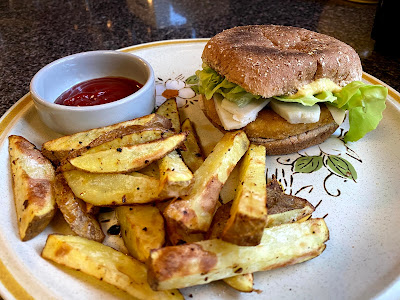 I don't celebrate Easter in a religious way, but y'all know I love every holiday! To me, Easter means Spring is well underway and the Earth is super-fertile. It also means chocolate bunnies and vegan eggs! I may be 40 years old, but my awesome dad still sends me Easter basket treats. This year, he ordered a Moo Free White Chocolate Bunny and some Sjaak's Peanut Butter Chocolate Eggs. 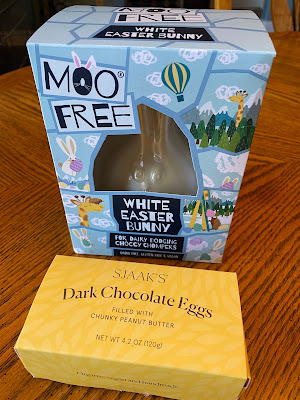 I broke into the eggs a few days before Easter, and they're so good. These are stuffed with crunchy peanut butter, and we all know PB chocolate is the greatest flavor combo on Earth. 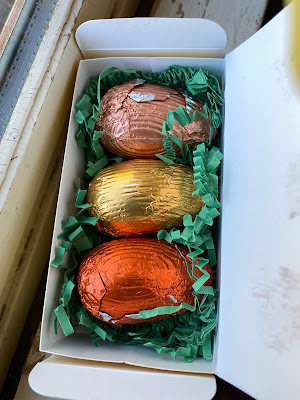 I waited until after my Easter morning run to try the bunny. I wasn't sure what to expect because I've had some vegan white chocolate that wasn't so great, but y'all, this Moo Free white chocolate is AWESOME. It actually tastes just like dairy white chocolate as opposed to the waxy cocoa butter flavor that some vegan brands have. Glad I still have lots of bunny left! I ate the ears first. 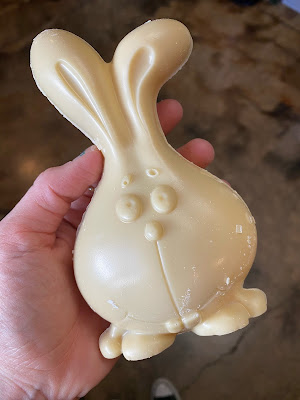 Later that afternoon, I went on an Easter picnic at Overton Park. We packed Miyoko's vegan mozz, some fresh tuscan loaf, vegan black forest ham, homemade vegan deviled eggs (from my recipe in Cookin' Crunk), mandarins, and grapes. Plus, some red wine! 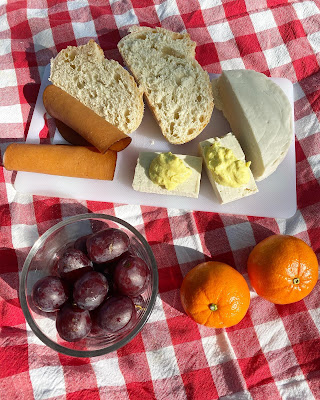 My dad turned 67 this past Saturday, April 3, and for the first time in over a year, I was able to visit them without doing a two-week quarantine. And Paul was able to visit them! We're all fully vaccinated now! Paul could never quarantine with me over the last year since he works with the public, but since I'm still working from home, so I was able to self-isolate for two weeks at a time. But man, that was no fun! I'm so glad we're all vaccinated! 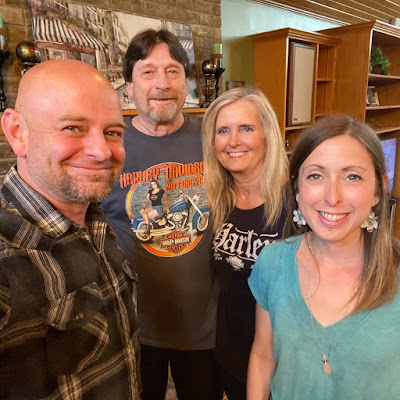 My mom cooked a big ole Southern supper with all our favorite foods — Vegan Chicken & Dumplins, Blackeyed Peas & Cornbread, Fried Squash, Macaroni & Tomatoes, and the last of Granny's frozen greens. I ran 10 miles Saturday morning before Paul and I made the drive over, and I was HUNGRY. 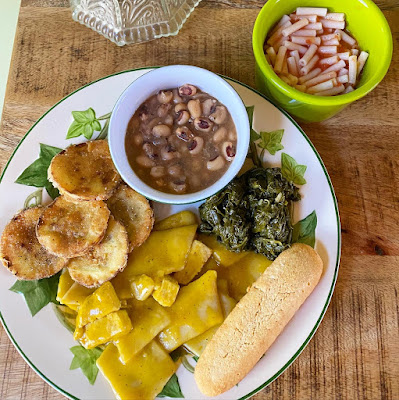 For dessert, mama made some Vegan Chocolate Coconut Cupcakes with ganache. These were really yummy. My daddy loves coconut! 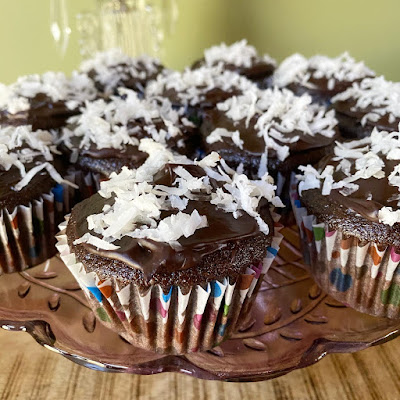 Paul and I both got daddy whiskey gifts. The Huling Station on the left is made in Memphis at the Old Dominick Distillery. Daddy LOVES whiskey, making him very easy to shop for. 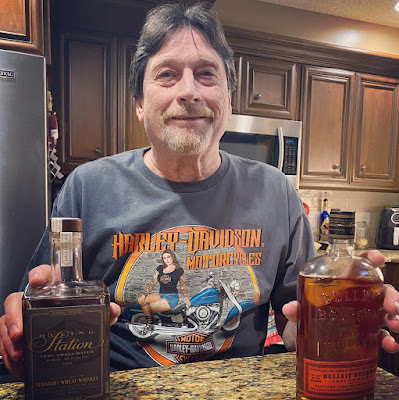 Last week, Rose Lee of Cheap Lazy Vegan was a guest on the No Meat Athlete podcast. I have two of her e-cookbooks, but I hadn't yet tried anything from them. Her recipes are super-simple with only a few ingredients. After the podcast, I was inspired to try a few, so I started with this Sweet Peanut Noodle Salad. 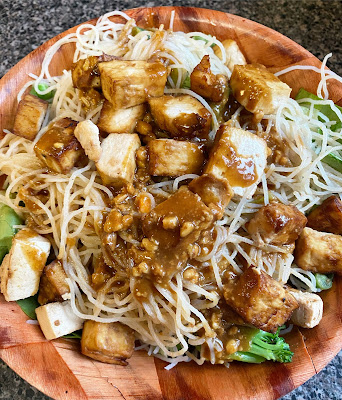 It's just rice noodles and frozen veggies heated with boiling water, served over lettuce with homemade peanut sauce (peanut butter, lemon, hoisin). I added some airfried tofu for protein! This was so good and quick. And cheap!

Curb Market in Crosstown Concourse is trying out some vegan menu items on Mondays, Wednesdays, and Fridays. On Monday, they had Beyond Sausage Pasta, and it was really yummy! It had lots of sliced sausage, broccoli, corn, and bell peppers with an olive oil-garlic sauce. I can't wait to see what else they try out! 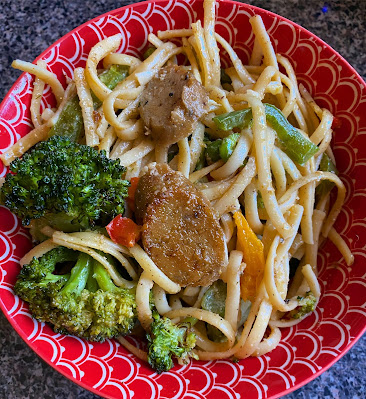 And finally, here's a recent Grain/Green/Bean Bowl (or Buddha Bowl). This has brown rice, chickpeas, roasted acorn squash (from my CSA), kale (from my neighbor's garden), and tahini-tamari sauce. 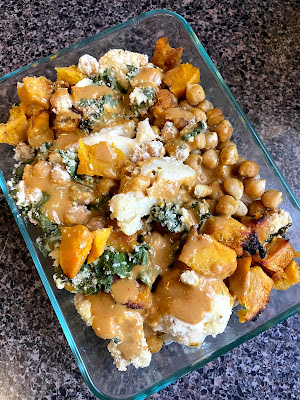