Fast Food on the Road!

I've missed you, blog friends! Last Thursday, Paul and I set out for a camping trip in Chattanooga, Tennessee, for his 41st birthday. I'll be sharing lots campsite meals and restaurant finds over the next few days, but first, I wanted to dedicate a post to fast food! I eat whole food plant-based most of the time, but I'm a junk food junkie at heart. I love fast food, greasy meals, and indulgent treats; I just try to enjoy them in moderation. I tend to save fast food as car treats on road trips, and during this trip, I enjoyed meals from the vegan fast food trifecta: Taco Bell, Subway, and Burger King.

Here we are in the car on the drive to Chattanooga! 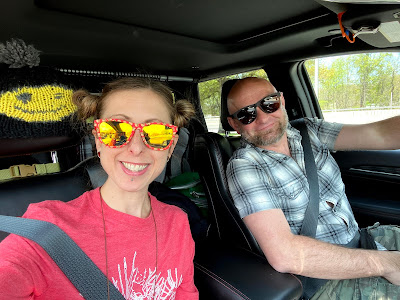 But first, on Thursday, I drove to Nashville to meet up with Paul. Our camper is at his parents' house, so we decided to meet up there, and I'd spend the night. And then we'd take off for the remaining 3-hour drive in the morning. My drive from Memphis to Nashville is about 3 hours, so I stopped at a Taco Bell along the way and ordered a Black Bean Crunch Wrap with no cheese or sour cream and a Loaded Potato Taco with no cheese or chipotle sauce. I ordered two sides of guac to use as a sauce in place of the cheese. I forgot to take pics of the taco, but I was driving, so it may not have been a good idea anyway! 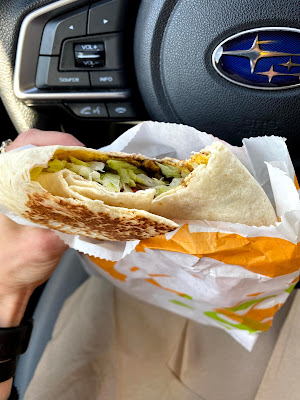 This was my first time trying both items, and they were GOOD! They'd be dry without the guac, so I highly recommend adding that. I used to love getting the 7-Layer Burrito (no cheese, no sour cream), but that's gone from the menu now (RIP, best burrito ever).

The next morning, Paul and I loaded up the camper and drove the three hours to Chattanooga from Nashville. We passed a Subway around lunch time, so we stopped in for subs. I got my usual Veggie Delite with all the veggies, guac, sweet onion sauce, salt, and pepper on nine-grain wheat. There's something about the taste of Subway bread that makes me so nostalgic for college! 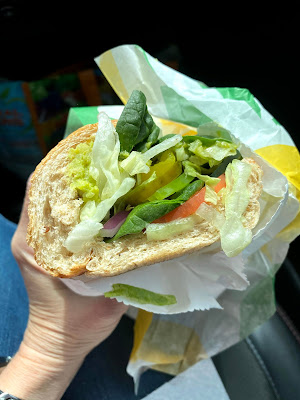 I'll share camping photos and lots of tasty meals tomorrow and next week, but since we're discussing car fast food, I'll go ahead and show what I ate on my drive back to Memphis last night. I stopped by a Nashville Burger King and saw they were offering the Impossible Whopper on the "buy one, get one for $1" menu, so I ordered two (hold the mayo)! I had one in the car right away and saved the other for lunch today. 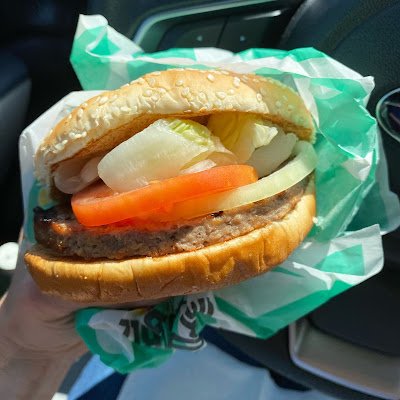 How did the burger hold up when you ate it the next day?

I do love how many more road trip options there are at major chains these days. Often they are the only places you pass when you are long distance driving! It used to be that there was nothing at all to be had.

Ooh, those new Taco bell items sound delicious! Although I'm sad to hear they no longer have the seven-layer burrito- I ate many, many (too many) "five layer" burritos (no cheese no sour cream) in my 20s and 30s.

Don't you wish there was a vegan fast food chain around? It would make traveling so much easier.

Looks like a great trip!! My partner's birthday was Monday, too - and we also went hiking! Years ago, Sluggo's used to have a location in Pensacola (where we vacation every year) and I got to eat there a couple of times - I was sad when they closed up shop there!