And I'm done! This weekend ended my 21-day Reset & Restore intuitive eating program with recipes and workouts by Lacy Davis and Jessica Wilkins. I want to tell y'all all about how awesome the program was and what healthy habits I plan to adopt going forward. But this is already going to be a long weekend photo recap. So I'll save the analysis for Monday's post. Tonight, I'll share what I ate all weekend!

Friday morning started with my usual bootcamp class at the gym, so I ate a Kuali amaranth snack bar (made with popped amaranth, dried cranberries, & agave) spread with a little STEEM caffeinated peanut butter. I wish I'd taken a picture, but it was 5 a.m. so I forgot. But it was damn tasty. After the gym, I came home to have this beautiful plate of Lacy's Savory Chickpea Pancake topped with avocado, tomatoes, nooch, and sriracha. This is the best (and easiest) pudla recipe I've ever made! 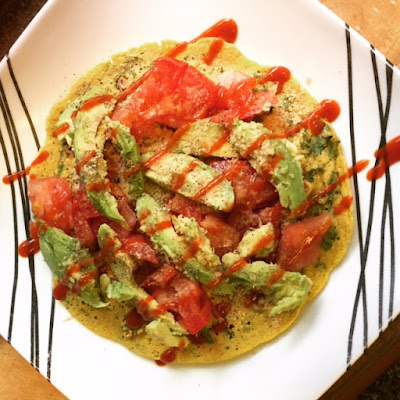 Real talk — Friday was hard. I had to go on a bit of a media blackout so I wouldn't lose my mind over the dire situation our country is in. I opted to engage in as much self-care as possible for a work day (thankfully, I work in a supportive environment of like-minded people). I brought this Green Juice to work (apple, cucumber, kale, spinach, romaine, ginger, lemon) for my morning snack. 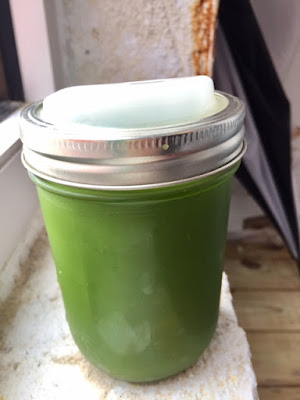 Food always makes me feel better when I'm sad/mad/anxious/whatever. So I was super stoked to be eating leftover Gluten-Free Vegan Kale Quiche and Broccoli with Peanut Sauce for lunch. Comfort food at its finest. 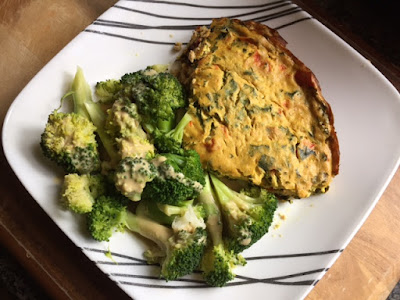 I treated myself to some Blue Lotus Golden Masala Chai with almond milk and agave and a raw Coffee Bean Snakaroon in the afternoon. 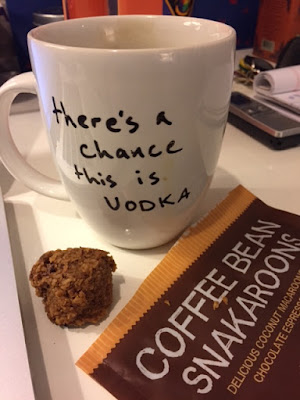 And dinner was leftover Hearty Veggie Chili with Cashew Sour Cream. But I've shown you that twice now so I'll spare you another picture that looks exactly the same.

On Saturday morning, Memphis was having its own version of the Women's March, and I wouldn't miss it for the world. But I had a 13-mile training run planned that I couldn't afford to skip. So what did I do? I woke up, had this bowl of Pumpkin Pie Oats with Almond Butter, and ran to the march. It was only a couple miles from my house, so I ran around downtown to log a few more miles before the event started. 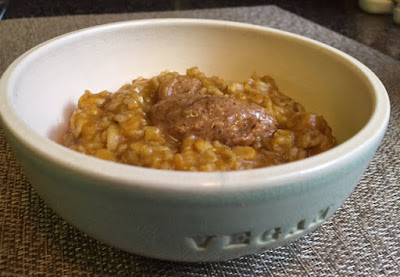 Since I was running and not driving there, I couldn't carry a sign. But my awesome co-worker Stacy offered to make me a sign and drive it to the march. I met up with her when I arrived. She made it double-sided with my favorite lady power symbol on one side (I'm getting a tattoo of this soon!). 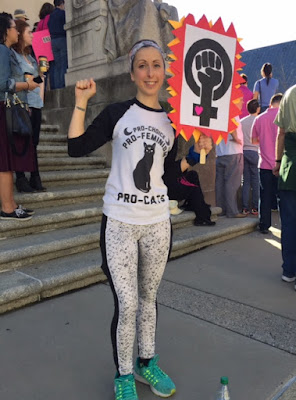 And "The Future is Female" on the other side. Here's my friend Pam, who I met up with at the march, displaying it! I also met up with my friend Susan, but she doesn't do pictures. 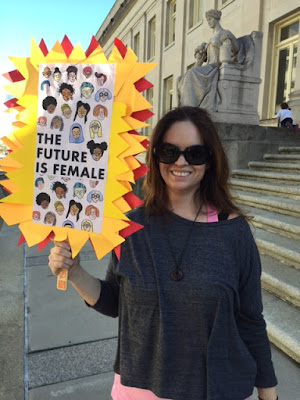 The crowd was AMAZING!! Thousands of people showed up to march against the new president (I don't like to speak or even type his name). This march left me sooooo energized! We don't have let a sexist, racist bigot rule us, and we sure as hell won't let him take away our rights. We have to fight back, and marches like these all over the country served to mobilize and energize. Here are a few of my favorite signs and scenes from the day (including a pic of my awesome Crosstown Arts co-workers — the ones on the left). 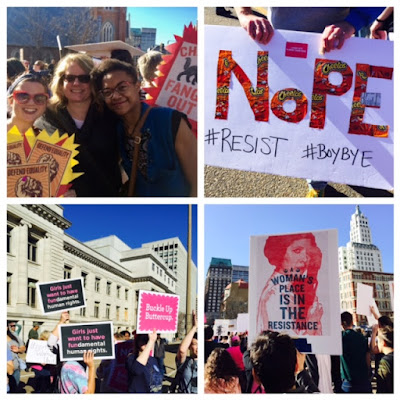 I'd gotten in about five miles before march began, and I knew I'd need a hearty snack to carry me through the march and the rest of my run. I picked up a few of the vegan flavors of Picky Bars at Breakaway Running (some flavors have honey, but there are five vegan ones!). I LOVE these bars so much! They're made with a base of dates, and they have nuts and agave and other natural ingredients. This one did have a little chocolate chips (read: refined sugar) but whatever. It was delicious! 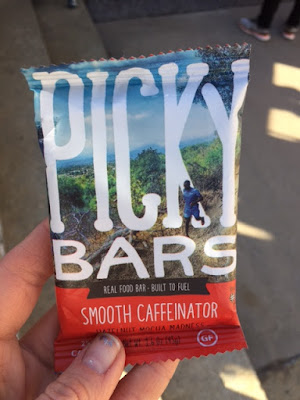 After the march, I walked Pam back to her car and took off running home. I'd planned to get in 13 miles, but I ended up only doing 10 total because I hadn't packed water, and I was hot and thirsty! I refueled after my run with this ugly (but tasty) Chocolate Strawberry Green Smoothie — frozen strawberries and banana, Yuve Chia Seed & Cocoa protein powder, flax milk, spinach, and greens powder. 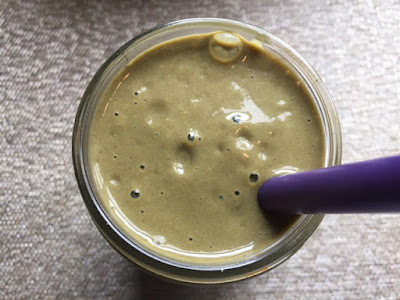 I cleaned my house Saturday afternoon, and while I scrubbed, dusted, and mopped, I munched on some Treeline Herb-Garlic Cashew Cheese and gluten-free Blue Diamond Smokehouse Nut Thins. As vegan cheeses go, Treeline is about as healthy as it gets. It's just cashews, lemon juice, spices, and probiotics. I got some on clearance for $2 because it expires in a week. 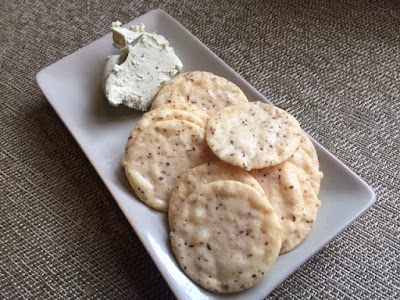 My dinner on Saturday night was Lacy's Mexican Bowl, which was on the meal plan for the first Sunday of Reset & Restore. But since I started Monday instead, I hadn't gotten to try it. This had brown rice (seasoned with chili powder, garlic, and onion for a Spanish rice flavor), black beans, sauteed peppers and onions, homemade guac, black olives, salsa, and cashew sour cream. So good and wholesome! 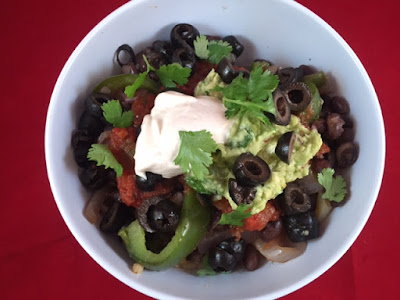 On Saturday night, I went to my friend Diane's birthday party. I had a couple glasses of red wine, and she'd sat out four types of homemade hummus with crudites! So I snacked on a A LOT of hummus and veggies.

Sunday morning started with a bowl of PB&J Oats — rolled oats, peanut butter, mashed fresh strawberries, and Bee-Free Honee. I enjoyed this in my PJs while catching up on season two of Empire. 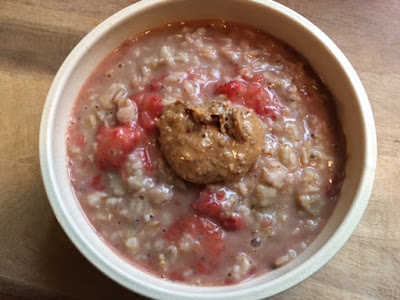 The oats held me over for a couple of hours, by 11:30, I was hungry again, so I heated up some leftover Vegan Gluten-free Kale Quiche. I've shown this pic several times, so I won't share it again. But it was good.

Diane sent me home with a bunch of her hummus Saturday night, so later in the afternoon, I snacked on her Smoked Artichoke Hummus with Mini Sweet Peppers. 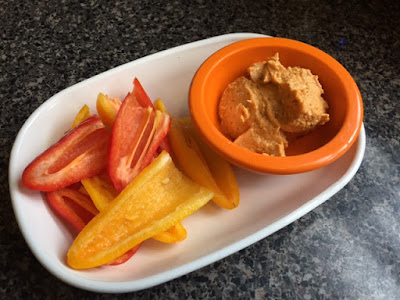 I had plans to visit my parents in Jonesboro in the afternoon, so I packed more cashew cheese and crackers for the drive. My parents had purchased an air fryer for me, so I was going to pick it up. Of course, when I arrived, my dad insisted that we try it out on some tater tots and onion rings. So even though those weren't really reset-friendly foods, I had a few bites anyway. Quality control, right? 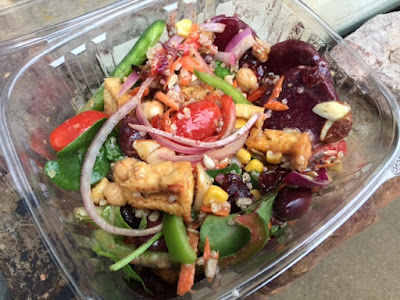 This was my last meal on Reset & Restore, and how fitting that it was a nutrition-packed salad! I'm back home now and about to retire for the night. When I wake up, I can eat whatever I want! I definitely have some splurges planned, but I'm not planning to go too crazy. I'll be sure and check in tomorrow evening with some R&R lessons learned and going-forward plans.
Posted by Bianca at 8:48 PM

I have enjoyed seeing your meals on this reset plan, they looked really yummy!

Even here in Australia I felt so depressed after your Friday (my Saturday) events. The marches on the following day made me feel hope again.

There are no words to express the dismay I feel. I can't believe this is happening to be honest. I'm pretty terrified to be honest.
All your food looks so delicious, especially the salad!! I can't wait to see what you make with the air fryer!!

What a great idea to run to the march. Glad you were able to go. It says a lot that the turnout to the women's marches all over the world were so much better attended and inspiring than the Inauguration itself. Im really really really hoping we'll be able to push back.
Things are grim but there are days ahead of delicious vegan food to fuel us.

I don't like speaking or tying his name either, so I like to just refer to him as the soggy cheezit :/

Aw, I love that you ran to the march. So perfect! I'm really looking forward to reading all your R&R thoughts in a later post. It's been fun following your journey!

This really feels like the revival of the feminist movement and a true moment in time where we are all obligated to stand up for what we believe in.
And i'm gonna need one of those mugs like in your photo here...! LOVE that!

Your whole reset program has looked like delicious meals to me, and a party with four kinds of hummus is seriously awesome!
Ttrockwood

i've followed you for years but i guess we must part ways. I have respected your opinions in the past but since you don't feel you can give our President Trump a chance I will begin reading other blogs. I have hope and look forward to eight great years. Being vegan doesn't automatically make me a liberal and/or anti-feminst. I've been actively involved with women's rights for forty years. Good luck and I hope you and your closed-minded followers are pleasantly surprised.