And here I am on Day 16 of Reset & Restore — a 3-week whole foods-based, intuitive eating program by Lacy Davis and Jessica Wilkins! Are y'all tired of me explaining what this is every time? Sorry! I want to be clear with each post just in case someone new comes along and wonders what the heck I'm talking about.

I woke up this morning around 5 a.m. to the sound of rain coming down outside my window. But I had a six-mile run scheduled, and I live by the postal service creed — "Neither snow, nor rain, nor heat, nor gloom of night stays these couriers from the swift completion of their appointed rounds." I ate a quick Ommie Cherry Chocolate Raw Fruit & Seed Energy Bar (a treat from my last Goddess Provisions box — more on this bar in a future Goddess box unpacking post!). Then I put on my Mizuno running rain jacket and old shoes that I don't mind getting muddy and headed out the door.

Fortunately, it was a warm rain, and it stopped shortly after I got started. After my run, I had Lacy's Hot Chocolate Smoothie. 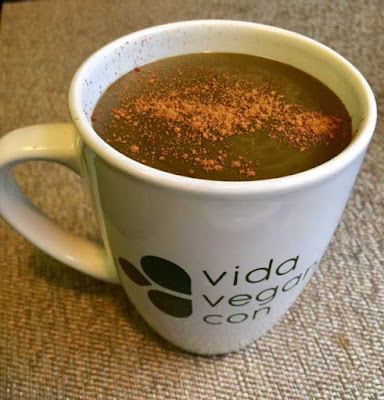 This was a heated smoothie made with fresh (not frozen) banana, raw cacao, and greens. I added a scoop of Nutiva chocolate protein as well. I got the bright idea to not only use hot water (as the recipe suggested) but to also blend it on my Vitamix's Hot Soup setting. This resulted in a piping hot smoothie that was like thick hot cocoa, which was awesome EXCEPT I stupidly thought it'd be a good idea to drink the hot liquid through a straw. OUCH! I burned my mouth all over. It's still raw and feels weird hours later. I ended up cooling the smoothie off a little with some cold almond milk and then sipped the rest (without a straw) like I should have done from the start.

My morning snack was Gluten-Free Kale Crackers with Spinach Hummus. So good! 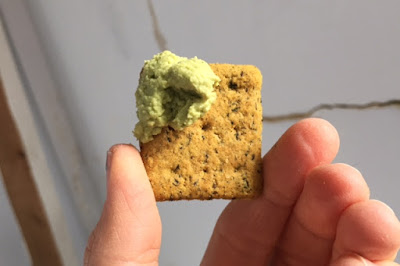 Lunch was my leftover Mexican-Style Savory Baked Oatmeal, which I mentioned last night was one of my favorite recipes on this reset thus far. Great with homemade guac, shredded lettuce, tomato, and salsa verde. 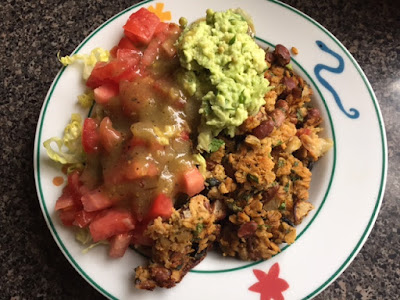 In the afternoon, I had a Pure Doctor Live Kombucha — it's kombucha that tastes like Dr. Pepper! I love this stuff. I took a picture — or thought I did — in the office, but it isn't showing up on my phone. I guess I didn't hit the shutter button all the way. Here's one I stole from the internet! I highly recommend this stuff.

Dinner was Lacy's Roasted Veggie, Chickpea, & Walnut Salad. The base of this salad is roasted chickpeas, carrots, beets, and fennel served over a bed of romaine with some raw grated carrot, walnuts, and green onions. To be honest, I didn't think I liked fennel (because I hate licorice), but I want to like it. So I opted to give it another chance. 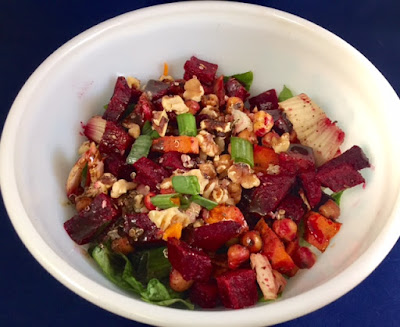 And you know what? I really love it! At least, I love it when roasted. The fennel got all caramelized and sweet, the perfect complement to the earthy beets and carrots. The dressing is just a simple balsamic with a touch of Dijon. I added quinoa for some extra carbs and protein. Yum!

After dinner, I snacked on some Addictive Wellness raw chocolate with a glass of almond-cashew milk. Then I found a little time to do the third guided meditation on the reset. Each week, Lacy sends out an email with a new guided meditation, and this week's meditation focuses on positive body image. I don't meditate nearly often enough, but it always feels so nice to set a few minutes aside to just chill.
Posted by Bianca at 9:43 PM

The Natural Grocers where I live has those delicious Live kombuchas on sale for $1.69!! The Lemon lime and also ginger are really great! I also love the root beer.. I don't know how they make them taste so much like soda but man are they great!!

A Dr. Pepper flavored kombucha?!?! Where do you find that? I have to try it! That savory oatmeal seriously looks so good.