It's been a yummy first weekend on the 3-week Reset & Restore program. I have to say, I believe this January reset program is my favorite one I've done so far! The food is amazing, and there's a big focus on maintaining a healthy attitude of not restricting "bad" foods (because there are no "bad" foods!). Instead, it's about making the most nourishing choices for your body. When you aren't telling yourself that you can't have something, it's easier to make the smartest choices. Does that make sense? Also, I'm loving the included workout videos, meditations, and the strong sense of community between everyone else doing this reset (we have secret Facebook group that connects all of us).

Anyway, on to the food! I woke up on Friday morning to SNOW! That's a rare sight down South. I was supposed to go to bootcamp at the gym, but I was afraid the roads might be bad. So I stayed home and did one of the Reset & Restore workout videos (led by Jessica Wilkins!). Then I had this Pumpkin Pie Smoothie (pumpkin puree, banana, pumpkin pie spices, Vega One Vanilla Chai, almond milk). 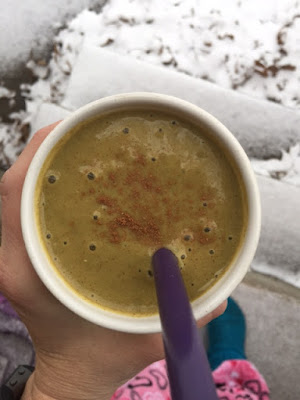 Despite the snow, I still had to go into work Friday. Since I live a block from my office, I really have no excuse! But the snowy walk to work that morning and back home for lunch was lovely. My lunch was a Sushi Salad made with leftovers from Thursday night's sushi bowl — romaine, cucumber, carrot, edamame, avocado, sushi rice, and cashew cream (seasoned with ginger juice, soy sauce, and wasabi). 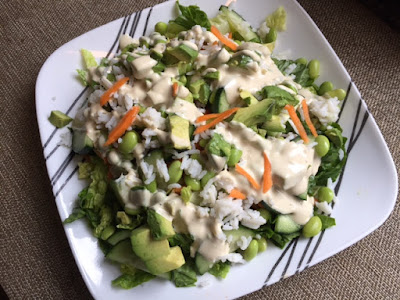 By dinner, though, I was craving something warm. The temps were COLD out on that walk home from work Friday night. Luckily, the meal plan's dinner that night was a warm and spicy Indian Bowl — brown basmati rice, curried red lentils, sauteed spinach and onions, and cashew cream. 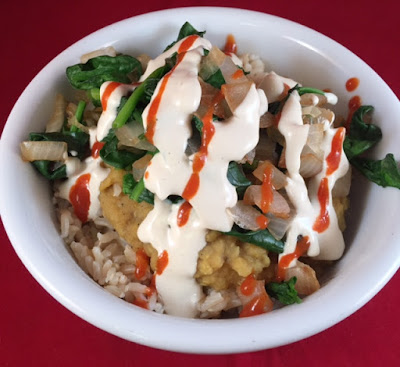 I had quite a few snacks throughout the day on Friday as well. My mid-morning snack was a handful of Raisins with Raw Pecans and Almonds. I had Pineapple Chunks in the afternoon, and late Friday night, I watched Game of Thrones and snacked on Coconut Oil-popped Popcorn with Nooch. 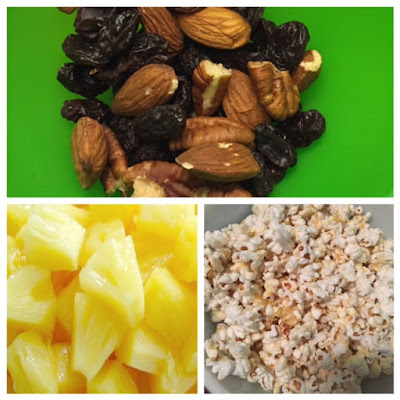 On Saturday morning, I had a planned 12-mile training run. I'm training for the Little Rock Marathon on March 5th, and this was to be my first long run on the new training program. But it was soooooo cold. The temp was 22 with a wind chill of 12! I'm not used to running in that kind of cold. But it had to be done. So I first made a nice bowl of Warm Oats with Banana N'ice Cream (hot maple-cinnamon oats with cold banana soft serve — an amazing combo dreamed up by Lacy Davis). 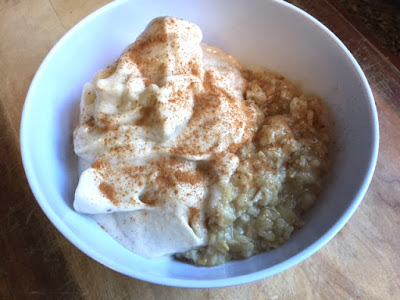 I doubled up on layers (two shirts, two pairs of pants, double socks, a neck scarf, ear warmer, and gloves), hit my treadmill for a warm-up mile, and then headed outside for the coldest long run of my life. I've done shorter runs in colder weather but never one this long in the cold. I never really warmed up, but I made it!! All 12 miles! Yea, I could have done the whole thing on a treadmill, but I'd rather freeze to death and die in a ditch than run on a treadmill for 2-plus hours. 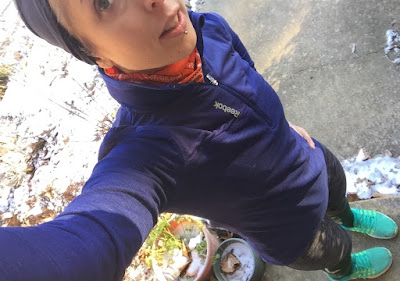 I had a quick protein shake (Vega Sport Berry protein powder + almond milk) after my run, and then I sat down for this Indian Salad. Same as Friday night's bowl but with raw spinach instead of cooked. By the time I had salad, I was sufficiently warmed back up (thanks to a hot shower and hot coffee). 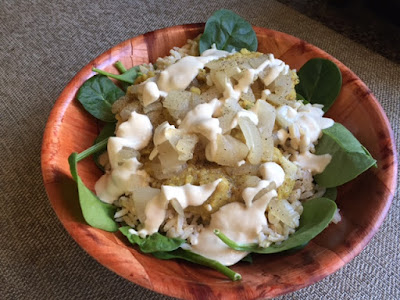 Afterward, I cleaned my house and made a few grocery stops. By the time that was done, it was time for dinner, which was a super-simple and hearty meal of Baked Sweet Potato with Steamed Kale and Chickpeas with Tahini. 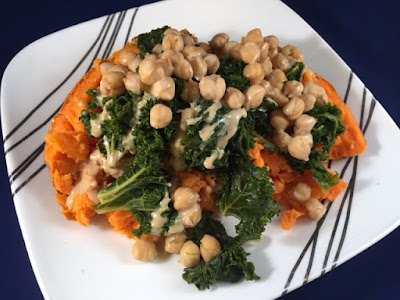 My gym had a belated holiday party on Saturday night, so Misti and I Ubered downtown. I decided from the beginning that I would have some occasional wine on this reset, and I definitely enjoyed a few glasses of red wine at the party. Afterward, Paul and I found a good movie on Netflix, and I made a late night snack using some leftovers from the week — Sauteed Tofu, Steamed Kale, & Peanut Sauce. 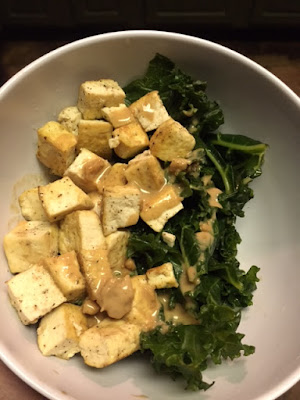 Before I went to bed on Saturday night, I whipped up Sunday morning's breakfast, which I enjoyed this morning in my PJs while watching Gilmore Girls on Netflix. It's a Quinoa Berry Breakfast Bake, and it was just fantastic. Sweetened with maple syrup and mixed berries and topped with crunchy nuts. I'm starting the second sample meal plan today, and this one is loaded with delicious-sounding recipes created by Lacy. Last week was a simple smoothie/oats, salads, bowls plan, but this one includes more complex dishes like this one. 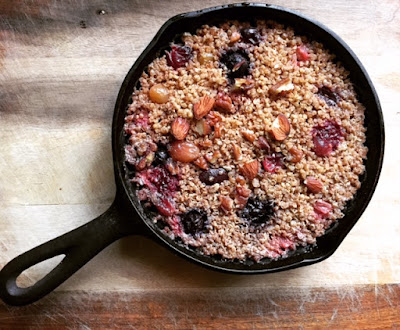 We had brunch plans at Imagine Vegan Cafe with our friends, and honestly, Imagine isn't the most reset-friendly place (lots of fried foods and plant meat, which I typically love — just not what I want during this program). But I managed to create a hearty and nourishing salad using side dishes (my meal plan actually called for a build-your-own salad for lunch anyway). I ordered a side salad, tofu scramble, black beans, steamed kale, and guacamole, and then I put it all together! This was my first dining out experience on this reset, and I think I did a pretty good job. I left the restaurant feeling satisfied and nourished. 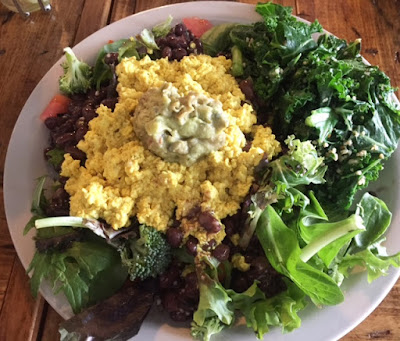 My snack today was Apples & Justin's Maple Almond Butter. Perfection! I love how much nut butter is in this meal plan. 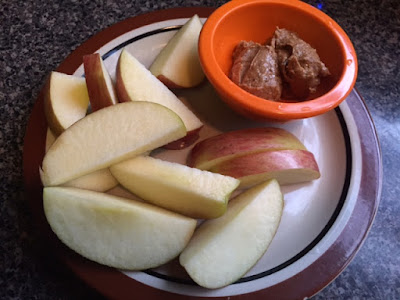 Dinner was Kung Pao Tofu! This was another of Lacy's amazing recipes! Marinated tofu, peanut sauce, kale, zucchini, and celery, all served over brown rice. Perfect start to a new week! 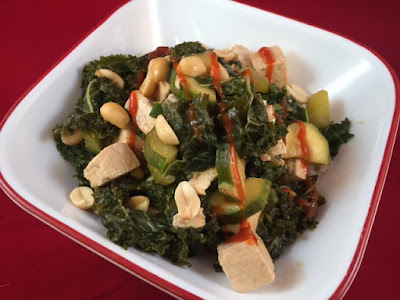 After dinner, I was craving some hot chocolate since it's still so cold outside. Luckily, I had some Essential Living Coco Mojo Vegan Chocolate Drink Mix (a superfood drink with cacao, lucuma, mesquite, guarana, and coconut sugar). It's definitely preferable over a standard refined sugar-based mix. Combined with a little unsweetened almond milk, this drink really hit the spot.
Posted by Bianca at 8:58 PM

Everything looks delicious! I am so impressed you went running in that cold. I always admire the dedication of runners when I see them running in extreme weather. You're doing so great!