Yay! It's Reset Day! In case you're new to the blog, I should tell you that, every January, I do some sort of reset diet/healthy eating challenge. In the past, I've called these "cleanses" or "detoxes," but that word is a little misleading since I don't believe eating whole foods actually does anything to "cleanse" or "detox" the body. That's what livers are for!

But I do believe that eating well in January helps to cleanse my mental state. Focusing on whole foods (after a couple months of eating everything in sight) just makes me feel good. In the past, I've done Crazy Sexy Diet, the Abundance Diet, the Choosing Raw meal plan, the Thrive Forward plan, the PCRM Kickstart.

This year, I'm embarking on Reset & Restore, a 3-week commitment to whole foods-based meals, workouts, intention-setting, and guided meditation. The program was designed by Lacy Davis (co-host of the Rise & Resist podcast and the creator of Liberation Barbell, a coming-soon-to-Portland feminist/queer-friendly/punk rock/body positive lifting gym) and Jessica Wilkins (a competitive vegan power-lifter and a health coach with Mighty Steady Coaching).

This past weekend, Lacy sent out the recipes and meal plans, but she made it clear that this is an intuitive eating program, so people should let their intuition guide them on food choices. The meal plans were just there for those who needed them. But I'm one of those people! I LOVE A MEAL PLAN (like more than just about anything). I'm not sure why, but I've always been really into following directions. I think it's a Type A/Jessie Spano complex. Ha! I'm going with Lacy's super-simple meal plan this week (and next week, I'll try her more complex plan with recipes). This week will be all about smoothies and oats, salads, and bowls.

So without further ado, here's what I ate today. I was off work for the holiday, so I slept in until 7 a.m., had a quick pre-run Cherry Pie Larabar (probably the most whole foodiest bars on the market), and headed out to log six miles in the rain. Today was also the first day of my new marathon training plan. I'm training to run the Little Rock Marathon in Arkansas in March. 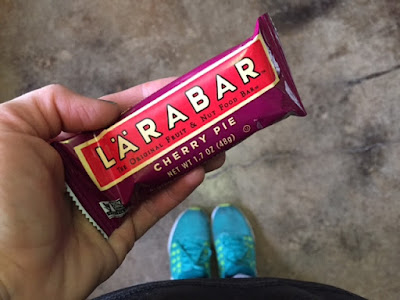 After my run, I had a PB&J Smoothie following the recipe in the program (almond milk, banana, frozen berry blend, flax seed, and peanut butter). I used PB2 to cut down on fat, and I added a scoop of Vega One natural protein. 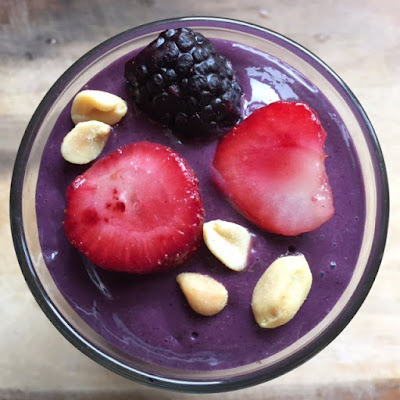 Lunch was a big ole Mexican Salad made using Lacy's recipe. I'm so excited to try her salad combos this week because I'm really bad about making every salad the same. I need to learn some salad variety skills. This has romaine, black beans, avocado, kalamata olives, sauteed bell peppers and onions, and salsa verde. 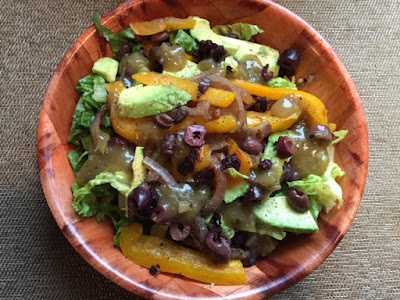 I'm also doing Apartment Therapy's January Cure, which is a cleanse for your house! Each day in January, they assign you a small cleaning task. Today, I was instructed to clean out one drawer. Lucky for me, I spent one of my vacay days last week straightening almost all of my drawers, so today, I tackled one of the few drawers left unfinished — a bedroom drawer filled with keepsakes, mementos, cards, etc. While I cleaned, I snacked on some raw Pecans and Raisins. 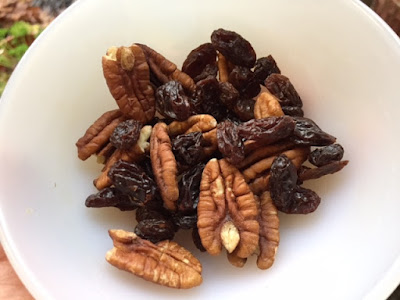 I'm really excited about the dinners on the reset this week. Every night is a different bowl. Tonight's was a Thai Bowl with sticky jasmine rice, sauteed tofu, steamed squash and zucchini, peanut sauce, and sriracha. I seriously licked the bowl. It was that good. 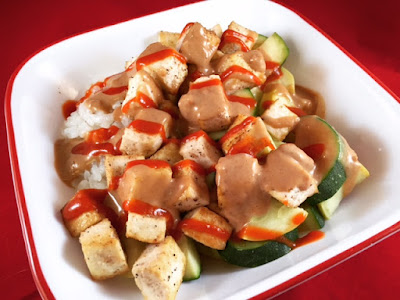 I also did the first guided meditation, which was emailed this morning to all of us participating. It was about 20 minutes long, which was a LONG time for me to sit still. But I did it! I'm really hoping to improve my meditation practice over these next three weeks.

Just FYI, I am still having black coffee on this reset because I've learned the hard way that I do not do well without it. I'm also allowing myself an occasional glass or two of red wine (because antioxidants!), but I'll try and save those for weekends. I've learned from cleanses in the past that denying myself alcohol for three weeks is a real bummer and makes me sad. I'll be trying to avoid sugar as much as I can though. And I believe this reset is largely gluten-free as well.
Posted by Bianca at 7:54 PM

I don't normally enjoy cleanse / detox posts for the reasons that you mentioned in your opening paragraph but I think that Lacy is super cool and I'm excited to read more about the Reset & Restore plan over the coming weeks.

The food looks tasty so far! The salad sounds delicious, I need to up my salad game too!

Oooh how delicious!! That dinner looks incredible and starting the day off with a Larabar definitely sounds like a great start to me. I am really looking forward to seeing what is coming up in the next few weeks!

I am looking forward to seeing your daily posts. That bowl sounds great.