Halfway there!! That is, I'm halfway done with my 3-week Reset & Restore intuitive eating program! Usually by this point in a January reset program/cleanse/detox/whatever I'm calling it that year, I'm already dreaming of all the things I'll eat when the plan is over. Pizza, cupcakes, beer, fried tofu, noodles, burgers, bubble tea, etc. But not this time.

I mean, don't get me wrong: I WILL be eating ALL of those things. But this time around, I'm not looking at those meals/drinks as "bad foods." And I'm allowing myself an occasional treat now and then (totally planning to have a vegan soft serve ice cream cone at Imagine Vegan Cafe's grand opening tomorrow night!). Because of that change of mindset, I'm not hyper-focused on those things I'm not eating right now. I'll have them eventually, and when I do, cool. But I'm fine right now without them (and I can have them now if I really want them).

Anyway, onto today's eats! I had a 4-mile run this morning in beautiful 70-degree weather. It's basically spring in Memphis right now. But I'm sure we'll have more cold days ahead. Remember last Saturday when I nearly froze to death running outside in the snow? Winter in the South is so weird. After my run, I had these Chocolate Peanut Butter Banana Protein Oats. I used Nutiva chocolate protein powder and a raw superfood cacao mix (with mesquite and lucuma), banana, and PB2 for these! 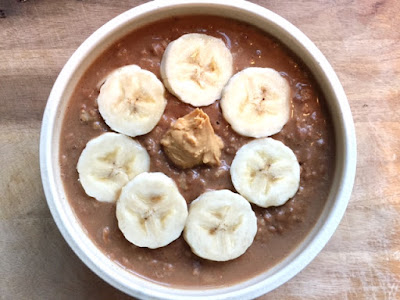 That was a very filling breakfast! But I was hungry again by 11:30-ish. That's when I had a Fuji Apple with Nuttzo Peanut Pro (peanut-almond-cashew-Brazil nut-sunflower seed butter). Few snacks are more wholesome or delicious than this. 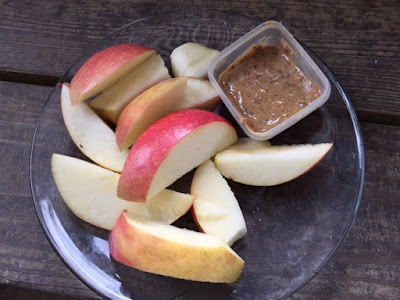 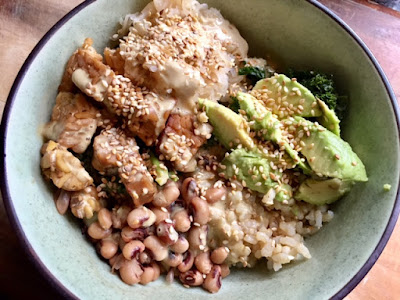 I'm trying to drink lots of booch to aid with digestion since I'm eating so many beans and legumes. After lunch, I cracked open this bottle of Simple Truth Organic Blueberry Ginger Kombucha. I'm having a small 8-ounce serving daily since storebought booch is so pricy. Starting a new batch of homebrew this weekend. I also had a small square of Lakanto monkfruit-sweetened almond chocolate in the afternoon because I had a little chocolate craving. I'm avoiding refined sugar as much as possible (except in booch!), but monkfruit, stevia, and other such sweeteners are just fine right now! 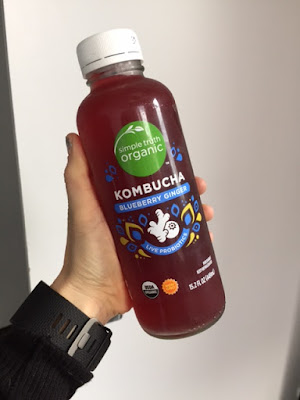 Tonight was PIZZA NIGHT for dinner! YES! Lacy included a recipe for gluten-free Socca Pizza in her Reset & Restore meal plan. This was sooooo good. 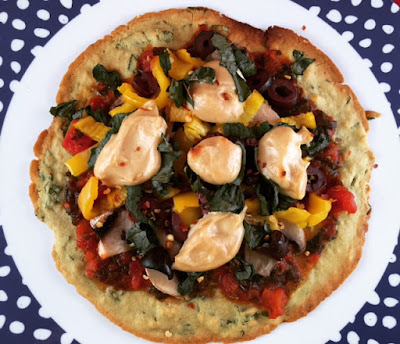 It had a crispy, cracker-like, chickpea flour crust and was topped with some jarred kale marinara (from Fresh Market), cashew cheese, black olives, mushrooms, and bell peppers. This was definitely my favorite dinner recipe from the reset thus far (warm oats/banana soft serve would be my fave breakfast). I made a single serving pizza by cutting the recipe in half, but now I wish I'd have made the whole recipe so I'd have leftovers.

Have a great weekend! I have some fun things/meals planned, so I'll check back in on Sunday with a recap.
Posted by Bianca at 8:09 PM

That pizza looks great! I need to look up a recipe for that crust because I'm also avoiding gluten right now, and I have some chickpea flour on hand!! I love the simple truth booch, at the Smith's grocery where I live it's often on sale for a pretty good price.

Ooooh yum! The oats and pizza look extra delicious! I'm loving all of the clean eats from this reset program. Everything looks delicious!

Hey Trixie! It's by Living Essentials. It's really a superfood hot cacao drink mix, but I also use it when recipes call for cacao powder. It's really good!!

I made a socca crust pizza last night with kale, mushrooms and cashew cheese. It was so freaking delicious and much better than any gluten free crust I've tried!! Thanks for the inspiration!!

Kombucha is so expensive! I use to make my own but after a certain point it kept getting contaminated. Now I want to get back into it. I just need to grow a new mother culture.... or find someone who has a nice strong one to share.