Nashville Vegan Eats: The BE Hive

This week, I'm focusing on all the amazing new vegan options in Nashville, Tennessee. I live in Memphis, but Paul is working in Nashville these days (and he has worked there off and on for years), so I'm lucky to have an excuse to visit Music City often. I've blogged plenty about Wild Cow, Graze, Avo, and Sunflower Cafe — all amazing vegan establishments that have been around awhile.

But this past weekend, on a visit to Music City, I made it a point to visit all the new vegan places I hadn't been to yet. I'm blogging about them all week. Tonight's post is about The BE Hive — a vegan butcher shop and deli in East Nashville.

Nashville's BE Hive has been making the world's best seitan meats for some time, and I'd picked some up at a health food store in Nashville on my last trip there in November. But they've recently launched a Saturday-only deli where you can order meals from a small menu or grab meats to go. Sadly, I failed to take a picture of the deli case, but it was a wonder to behold — sausages, bacon, filets, pepperoni, and more. I grabbed this image off their BE Hive Instagram though so you can see some of the meats that were in the deli case.


I did, however, get pics of my meal (of course!). I stopped in here Saturday afternoon and got a half order of The Italian Sandwich (seitan deli slices and pepperoni with aioli, onion, tomato, and lettuce on baguette). The sandwich was very meaty and totally hit the spot after a long volunteer shift at the Rock & Roll Marathon. 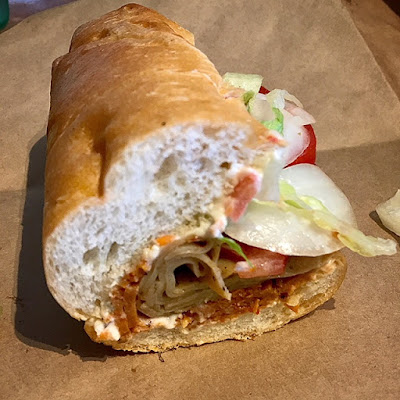 They also offer Mozzarella Sticks! And I will never let a chance to eat cheese sticks pass me by. I got an order of these as well. You get three sticks, and they're absolute perfection. Melty housemade mozz on the inside, crispy/herbed breading on the outside, served with marinara for dipping. I was sad when they were gone. 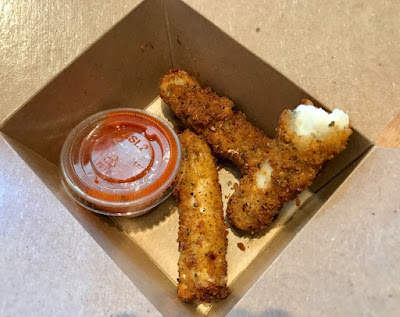 The deli also offers a turkey bacon ranch sandwich and a pastrami sandwich, plus seitan wings, a caprese salad, and a chickpea chicken salad. And there's a rotating weekly menu of specials — this past week, that was a meatball sub (but they were sold out when I arrived), a chocolate chip cookie, and a chocolate mini pop-tart (also sold out when I arrived or I would have definitely gotten one!).

The deli is located in the East Room, just next door to Hail Dark Aesthetics (a cool occult shop with crystals and other fun stuff but WAY too many animal bones/nonvegan stuff for me to feel comfortable in there, ha!). There's only one table for dining inside the East Room, but there are also some picnic tables outside Hail. Or you can always get your meal to go!

As for the butcher shop side, all of BE Hive's meats, plus their mozz and chicken salad are available packaged and ready to go. I got some of their bacon and apple-herb sausages to go! 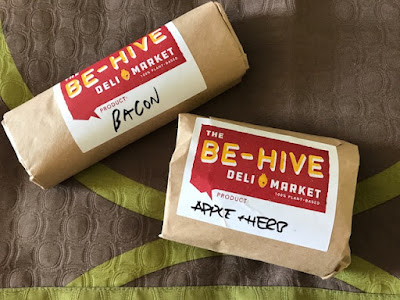 What a cool option to have! The sandwich looks delicious and those mozzarella sticks!!! Yes please!!!

Mozzarella sticks!!! Yes please! And that sandwich looks really amazing! I love that we live in a world where there are vegan butcher shops!!!

This sounds like such a yummy place! I can't go past a sandwich, and so great that you can buy their meats to take home.

That is just crazy amazing that there is such a thing as a vegan butcher shop!! Love that! Your sandwich and mozzarella sticks seriously look amazing.
Ttrockwood