Last Friday, City Tasting Tours and the Crosstown Memphis CDC (where I serve on the board of directors) hosted the second-ever Crosstown Culinary Crawl. City Tasting Tours, run by the awesome Cristina McCarter, a former co-worker of mine from our Memphis Flyer days, hosts regular food tours all over Memphis. But this was her second Crosstown crawl.

Since I live and work in Crosstown, I wasn't gonna miss this. Plus, the tour was vegan-friendly! My friend Susan (a vegetarian) and I bought tickets, and on Friday at 5:30 pm, we met the rest of the crawlers at Atomic Tiki, a new-ish tiki bar in the Evergreen Historic District (which is located in the larger Crosstown neighborhood). We were served Nachos with Pineapple Pico. I think most people had meat on their nachos, but ours was just the salsa. And it was so gooood salsa! 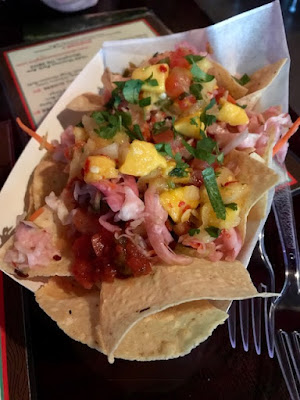 And then they came out with Peanut Noodles. These were very peanut-ty and quite filling. Susan wisely only ate half of hers since she knew we had much more food to eat. But I finished mine off because I was so hungry! 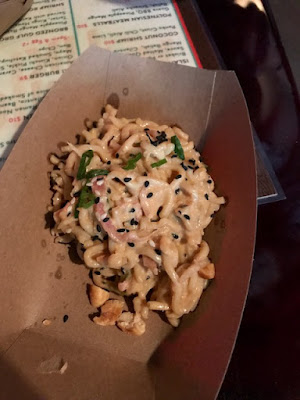 Lastly, Atomic Tiki gave us some Vegetable Dumplings. These were excellent with some kind of savory-sweet sauce. 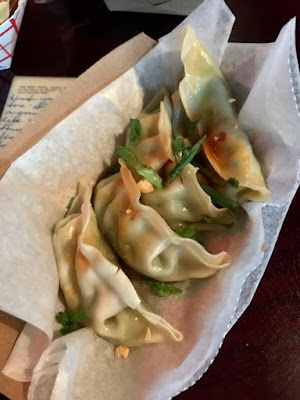 Since this was a crawl, most people walked from place to place, but it was rainy and cold, so Susan and I drove to the next stop — Midtown Crossing Grill. It was just a few blocks away, but I don't like to be cold. Octavia, who owns Midtown Crossing, has always been very accommodating to vegans, and she made us special Vegan Brunch Sampler Plates while everyone else ate the meaty versions of the same thing. This was Biscuits & Vegan Sausage Gravy, Biscuits & Redeye Gravy (my fave), and a Belgian Waffle. Love Midtown Crossing's brunch, so this plate made me very happy. 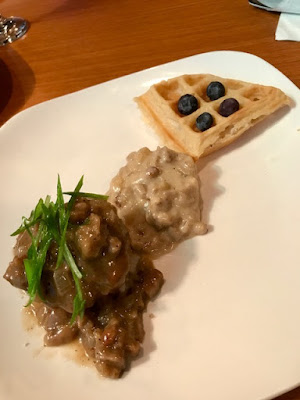 We were also served a mimosa at Midtown Crossing Grill because brunch! I went with a pear mimosa, and Susan opted for grapefruit. 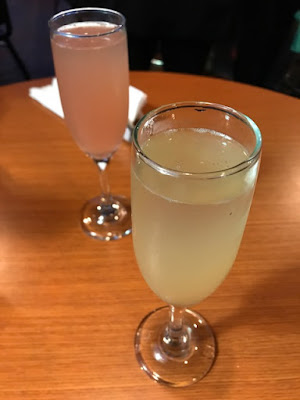 From there, we started walking with everyone else since the rest of the stops were closer together (and it stopped raining). The next place was Mardi Gras Memphis. I actually didn't expect any vegan option here because there wasn't one on the last Crosstown Culinary Crawl that stopped here. But this time, owner Penny Henderson whipped up an amazing Vegetable Pasta for Susan and I (and another guest who didn't eat seafood opted for pasta as well). Everyone else had some sort of seafood stew over fried bread. 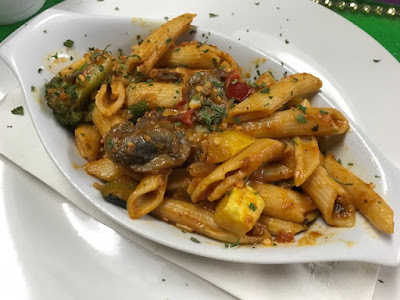 I asked the server if this pasta was available on the regular menu because it was soooo good. He said it was available by request! So I'll be back!

Our final stop was Crosstown Brewing Co., our neighborhood brewery, for beers! Our ticket for the crawl came with one beer, so I picked the Alt School, an altbier-style beer. It's my current fave of their offerings (I've tried them all — several times!!). Susan got the Traffic IPA, which is hands-down the best IPA in town. 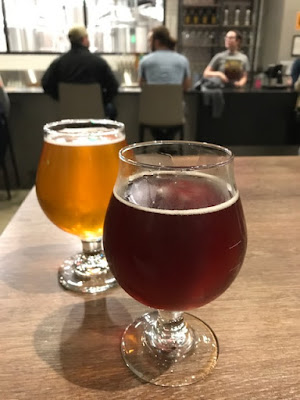 The Crosstown Culinary Crawls will be happening more frequently now! The next one is set for May 4, but the restaurants haven't been announced yet. Tickets are $45 and available here.
Posted by Bianca at 9:00 PM

What a fun time! I always love reading about your social events and your participation in fun local events. It's very inspiring for me to try and get past my social anxiety and experience more! The food all looks great but you know I'm eyeing that brunch sampler! Yum!

The dumplings and peanut noodles look great, and a pear mimosa?? Delicious!