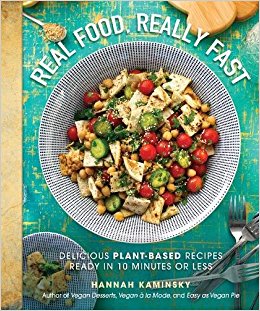 The fabulous Bittersweet blogger/cookbook author Hannah Kaminsky, whom I've had the pleasure of meeting in real life back in the Vida Vegan Con days, has a new vegan cookbook out, and it's right up my alley. Real Food, Really Fast is filled with simple vegan recipes for busy folks. And busy is my middle name!

That said, I don't mind spending all of my free time in the kitchen since I love to cook. But I'll admit that it is sometimes nice to have time for other things — like reading and Netflix and hanging with my cats.

I've made three of Hannah's recipes from this book, and nothing took longer than 30 minutes from start to finish. Most took way less than that!

On Saturday night, I made her Mofongo Bowl — mashed garlicky plantains topped with citrus-scented black beans. I added avocado and hot sauce cause why not? 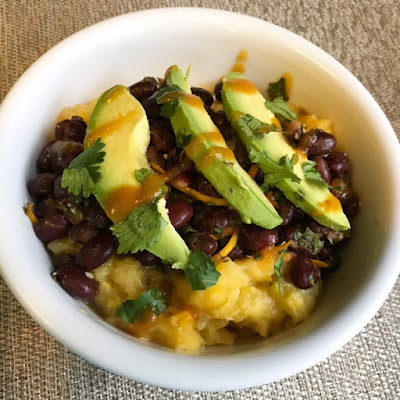 This was so simple to make and so impressive! I've only ever had fried plantains, so I had no idea you could mash them like potatoes. They're much starchier than potatoes, which makes me love them so much more. Mashed potatoes are typically a little too creamy for me. I like texture, and mashed plantains have it. The beans were flecked with cilantro, garlic, and orange zest. I was pretty sad when the leftovers were all gone.

Last night, I cooked a brinner from her breakfast chapter. I made her Straight-Up Chickpea Scramble, which is a vegan egg substitute made without tofu! 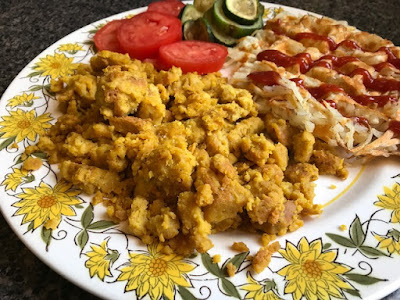 I love tofu scram, but it's nice to mix things up. This is made with chickpea flour, so it's similar to pudla. But you scramble the curds in coconut milk rather than cooking the batter up like an omelet. Great texture, and I love that pudla flavor. Plus, one serving has 18 grams of protein!

On the side, I made her Hash Brown Waffles, which are just frozen hash browns cooked in a wafflemaker. Genius. I may never cook hash browns on the stovetop again. 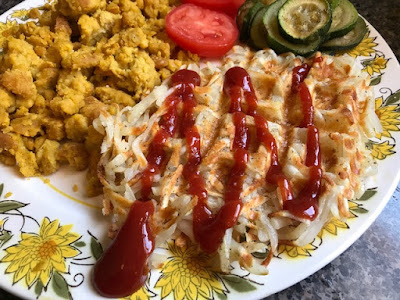 One thing I love about this book is that Hannah doesn't shy away from using the microwave. For instance, the plantain for the mofongo is softened in the microwave before mashing on the stovetop. Microwaves are great tools for quick cooking, and they too often get a bad reputation. That said, she doesn't use microwaves in every recipe, just the ones where it makes sense to use it for maximum time savings.

It's such a delight to see my recipes recreated in your capable, creative hands! Thank you so much for this thoughtful review. It totally made my day!

I love the chickpea scramble. I've never seen a scramble made out of the chickpea flour, only chickpeas. The book looks beautiful!

These recipes look and sound delicious! It sounds like it aligns with my goals and energy level too so I'm definitely going to have to check this out! Awesome review!

This book is on my to get list, I get more excited about it with every review I see!