Last week, my friend Susan invited me to join her for a media preview of New Wing Order, a new hot wing food truck launching in Memphis this September. You're probably thinking, "What's a vegan going to eat from a hot wing truck?" Or maybe you're not thinking that if you've read the title of this post. Duh.

So yea, they have vegan Fried Avocado Tacos, and they are AMAZING. 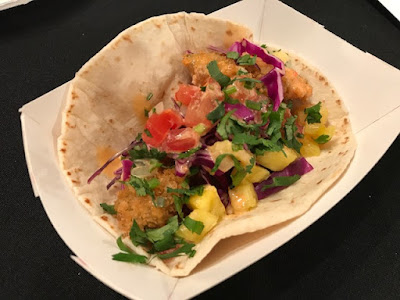 The avocado is coated in panko and fried in oil. It's served with pico, diced pineapple, and a spicy sauce (called bang bang sauce) on a soft flour tortilla. So, so, so good! And since Susan and I both are vegetarian, the New Wing Order folks gave us an extra taco since we couldn't eat the wings everyone else at the party was eating. Since this was a tasting, New Wing Order staff went around and asked for thoughts on each item. All of meat eaters at our table loved this taco as well.

I'm especially impressed that a hot wing truck would even think to add a vegan option. That's a cuisine that typically doesn't lend itself to being inclusive for non-meat eaters. And even though it's just one item, it's a very delicious, gorgeous dish that they put lots of thought and care into. And that's awesome.

New Wing Order hits the streets in September, and I cannot wait. I'll be stalking this truck on Twitter to get my taco fix! Read more about the story behind the truck on my friend Susan's blog, Hungry Memphis on the Memphis Flyer website.
Posted by Bianca at 7:58 PM

That is amazing that a wing place would think of the vegetarians and vegans. Especially to put together a thoughtful, beautiful and tasty taco. I'm sure we've all been to restaurants where we don't get the same treatment.
I've never had fried avocado, and now I really want to!