A couple months ago, while visiting my best friend Sheridan in Little Rock, I stumbled upon the Miyoko’s Kitchen Smoked Vegan Mozzarella — a smoky version of their popular cashew-based Fresh Mozz. I’d had the Fresh Mozz a few times, and it’s just fantastic, so I knew I needed to try the smoky version. Sadly, Memphis’ stores still don’t carry the Miyoko mozz (though we did finally get a couple of her other aged cheeses in our Whole Foods), so I grabbed some to take back home with me.


Then the cheese sat in my fridge for awhile as I thought about what to do with it. It had an expiration date of July, so I’ve had plenty of time. But then it hit me — Buffalo Chicken & Smoked Mozzarella Pizza! 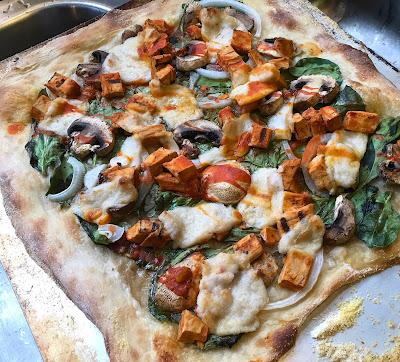 I used some homemade pizza dough that’s been in my freezer for awhile. And I made some buffalo chick’n using Beyond Meat grilled strips. I used a garlic butter sauce in place of a traditional pizza sauce, and I added some baby spinach, mushrooms, and onion slices for good measure. The result was a mouth-watering pizza that was even better dipped in vegan ranch dressing. 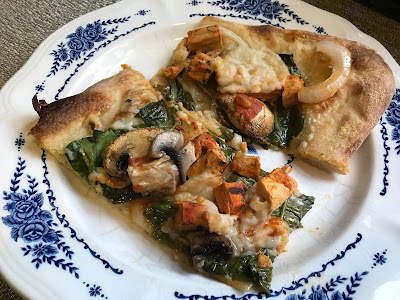 Pre-heat the oven to 500 (or if using a pre-made crust, follow package directions for temperature).

Place the chopped Beyond Meat chicken in a mixing bowl and season liberally with hot sauce. How much depends on how spicy you’d like your pizza to be!

Melt the vegan margarine and season with garlic and onion powders. Use a basting brush to spread the butter sauce evenly over the dough, leaving some room on the edges for crust.

Bake for 10-15 minutes or until the edges of the crust are browned (or follow package directions for a pre-made crust).
Posted by Bianca at 9:00 PM

This sounds good! I particularly like 'hot sauce to taste', so someone like me could make this with a minimal amount for my delicate constitution. ;) Love the idea of a garlic sauce for the base... and dipping it in ranch!

Impressive!! I was just reading an article about the best vegan cheeses for pizza and Miyoko’s mozzarella won first place by a landslide. Smoked sounds even better to me! I bookmarked this so when we do grilled pizza this summer i’ll try it :))
Ttrockwood

Whoa!! that looks seriously incredible! The crust looks pretty awesome too, I seriously love pizza crust. I've never tried the Miyoko's mozzarella but I think pizza would be the perfect way to try it!

I love the smoked Mozz so much. It's definitely one of my favorite! That pizza sounds amazing and I absolutely love the idea of using a garlic "butter" sauce as the base!! Definitely sounds like a pizza you'd get at a restaurant!!

Oh, and all the thumbs up to dipping this in ranch!