Hey everyone! I spent the weekend in Nashville (actually still in Music City as I type this!) volunteering at the Nashville Rock & Roll Marathon. I was supposed to run the marathon (it would have been my fourth), but I sustained a stress fracture a few weeks ago and had to stop training. I decided to sign up as a volunteer though because I figured working at the race would help me get over being bummed about not being able to run it. And it did!

One of the best things about volunteering and not running was that I got to eat ALL THE FOOD instead. So many new vegan places are popping up all over Nashville, so I made it a goal to check out as many of those as possible. And I'll be dedicating all of my blog posts this week to those awesome new (and some older) options, starting with The Southern V. 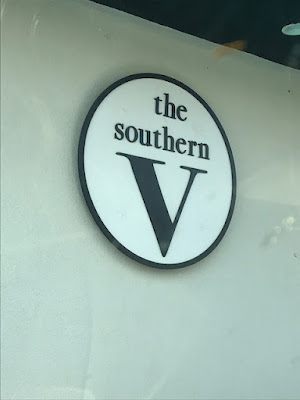 I would have had to watch what I ate the day before the race, but instead I got to eat whatever I wanted! So when I arrived in Nashville on Friday, the very first stop I made was at The Southern V. Last time I was in Nashville, The Southern V had very limited hours, and I couldn't catch them open. But now they're in a new location at 1200 Buchanan in the Buchanan Street Business District, and they're open more regular hours. And it's cute inside! They got their start as a grab and go business in a little house, and the only seating was outdoors at a picnic table. But now they have a full dining room. 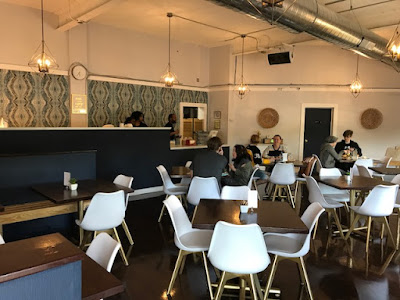 This comfort food cafe is known for their fried seitan chicken, so of course that's what I wanted to try. I ordered the Nashville Hot Chick'n because when in Nashville, you eat hot chicken. Memphis has BBQ, Nashville has hot chicken. It's what the city is known for. 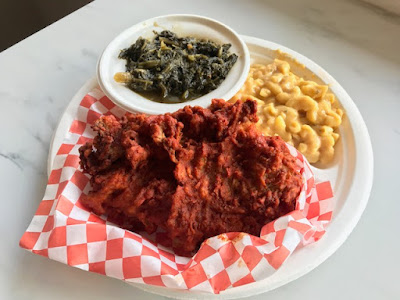 This came with two sides, so I chose Mac and Cheese and Collard Greens. Everything was amazing! The seitan was meaty, and the breading was crunchy and fried to perfection. I couldn't tell what the cheese sauce base was, but it was creamy and very cheesy. The collards were slow-simmered, just like granny's homemade greens. 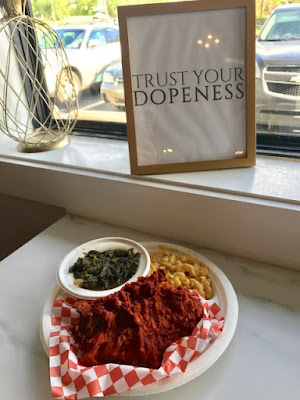 I will DEFINITELY be back here. They also serve breakfast and offer that same chicken in a biscuit sandwich. Plus, they have vegan doughnuts at breakfast!
Posted by Bianca at 9:52 AM

That's great that you made the best of a non-ideal situation. Eating all of the vegan food would make me feel better too, and The Southern V would definitely be on my list of places to go. I love collard greens, but they're not something served in restaurants here. I would be all over those!

I agree with Cadry. It's very inspiring that you made the best of a not perfect situation! And your meal looks AMAZING!!!