It's random meal round-up time! We'll start with this pizza that I've been dreaming about ever since I swallowed the last bite. And yes, I ate the whole thing in one sitting because I'm a beast. I ordered this Cream & Greens Pizza from Fuel Cafe at the last Memphis Vegan Drinks. Made by my pizza chef friend Don with his homemade cashew cheese, vegan mushroom cream, potatoes, wilted greens, and mushrooms. Fuel has the BEST vegan pizza in Memphis — probably the world, thanks to Don's handcrafted sourdough crust and cashew mozz. 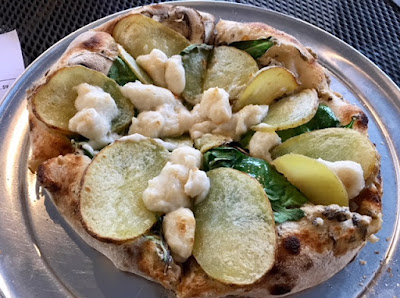 I made these Blueberry Buckwheat Pancakes with Field Roast Apple-Maple Sausage last Friday morning. Pancakes make a quick-ish weekday breakfast when you're using a pancake mix. This buckwheat mix is from Arrowhead Mills, and I always keep it on-hand. I use the Neat Egg mix as the egg sub for the recipe on the back of the bag. 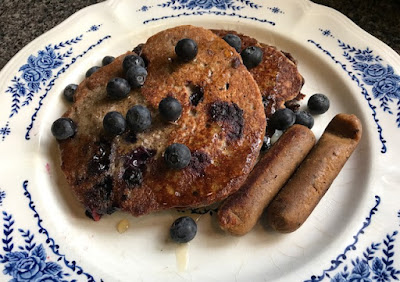 I picked up some Be-Hive Vegan Deli Slices on my last trip to Nashville (it's a Nashville-made seitan that's just amazing!). Made an Open-Faced Philly Cheesesteak with those slices, Follow Your Heart Pepper Jack, sauteed peppers and onions on sprouted grain toast. Served with the most awesome Sriracha Lentil Chips that my parents turned me onto. 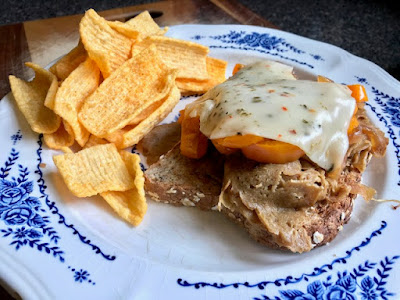 Raymond, our vegan/vegetarian chef at Crosstown Arts (where I work), has been testing recipes on our resident artists over the past few months. Crosstown Arts' plant-based cafe will open this summer, with a changing weekly menu based on what's in season. Yay! Anyway, when Raymond has leftovers after feeding our residents, he brings them down to the office. I snatched a bite of one of his Seitan Philly Cheesesteak Wraps the other day and had to have a whole one to take home for dinner. Ooooooh, so good. 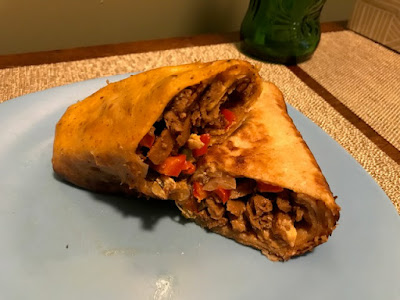 My Easter basket from my dad was a stash of vegan jerkies and meats from FakeMeats.com and included this Fine Herbs Veggie Roll by elianna. It's a summer sausage made from peanuts and herbs! I snacked on the sausage slices and some vegan pepper jack with crackers and fresh fruit while cleaning the house on Saturday. The sausage doesn't really taste super peanutty. It's more like sausage! 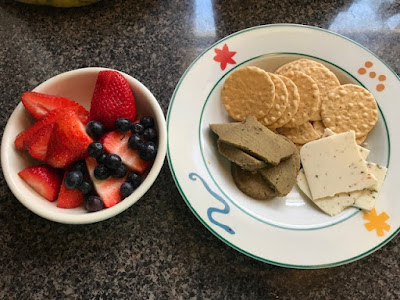 I'll leave you with this magnificent platter of a Memphis Slam & Hash Brown from Imagine Vegan Cafe. Pam, Vaughan, and I had brunch at Imagine on Easter morning, and I had this menu fave — biscuits topped with vegan sausage, tofu scramble, country gravy, and vegan cheese sauce. I always get a half order (because a whole order is twice this size!!) and add a hash brown. 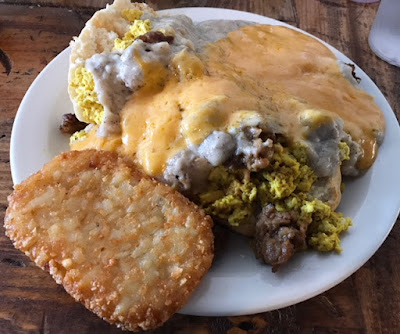 I have a bunch more random meal pics to share, so we'll continue this Stuff I Ate post on Sunday night (or maybe Monday night if I feel like taking a whole weekend off blogging). See y'all soon!

That pizza looks amazing!! Actually it all looks really amazing! I can't even imagine a full order of those biscuits and gravy!!

OMG everything looks so incredible! That pizza is beautiful and the blueberry pancakes with vegan sausage sounds and looks so good! The Imagine breakfast is all of my favorite things on one plate! That looks so freaking good. All the breakfast for the win!

You have the best five star meals! That herb and peanut sausage sounds really good, and my gosh that pizza...!!
What a perfect easter brunch, but my gosh who could ever finish the whole order?
Ttrockwood

That pizza sounds so amazing, I need it. Sorry to the pizza I just ate for lunch, but I can tell it just wouldn't measure up to the pizza on your post!