Miyoko is the Queen of Vegan Fancy Cheese. Her cookbook, Artisan Vegan Cheese, flipped the vegan script, y'all. Before Miyoko, we purchased pre-made block cheezes for our fancy wine parties. And they were good (still are), but they weren't artisan cheese. They weren't aged, and they didn't compare to the stinky cheeses our omni friends eat. If we were feeling really fancy, we'd create vegan hippie cheeses using nooch and agar, a la Jo Stepaniak's Ultimate Vegan Cheese Cookbook. And those classic recipes are great too!


But just as there's a difference between the dairy cheese blocks you get in the fridge case by the butter and milk and the dairy cheese in the expensive case, there's a difference between aged nut cheese and other vegan snack and sandwich cheeses. I've used Artisan Vegan Cheese to create homemade aged cheeses a number of times, and though the recipes are simple, they're also very time-consuming. I mean, aging doesn't happen in a day, folks. So thank freakin' goddess for Miyoko's Creamery!

You can now order Miyoko's cheeses online. There are various sampler packs so you can try multiple cheeses, and there's even a holiday sampler pack with limited edition flavors (in case you're wondering what to get me for Christmas!). 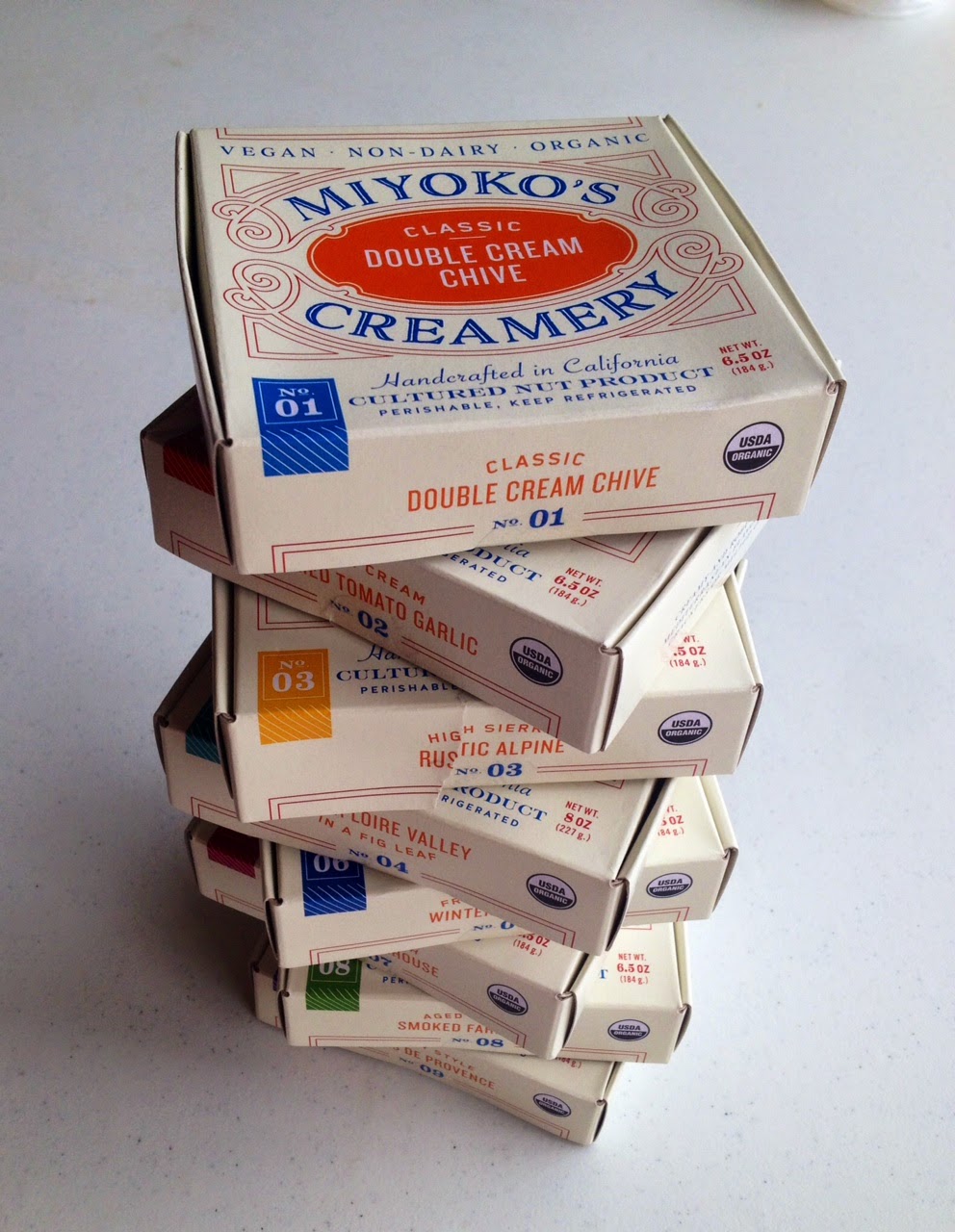 Miyoko and I were both presenters at Seattle VegFest this past March, and she mentioned that her cheese-making business was opening soon. Oh my gawd, I couldn't wait! Having had Miyoko-made cheeses before in Portland — when she made all the cheeses for the Vida Vegan Con 2013 gala —I knew things just taste better when Miyoko makes them.

Well, the Creamery finally opened for business a few months ago, and Miyoko sent me a sampler box to review. But there were eight cheeses in this box! And one girl can only eat eight cheeses so fast. It's taken me quite awhile to work through them, but I'm proud to say that I've finally eaten all my nut cheese. Each cheese comes in a cardboard package, and inside they're wrapped either in wax paper or cellophane, depending on the style of cheese. 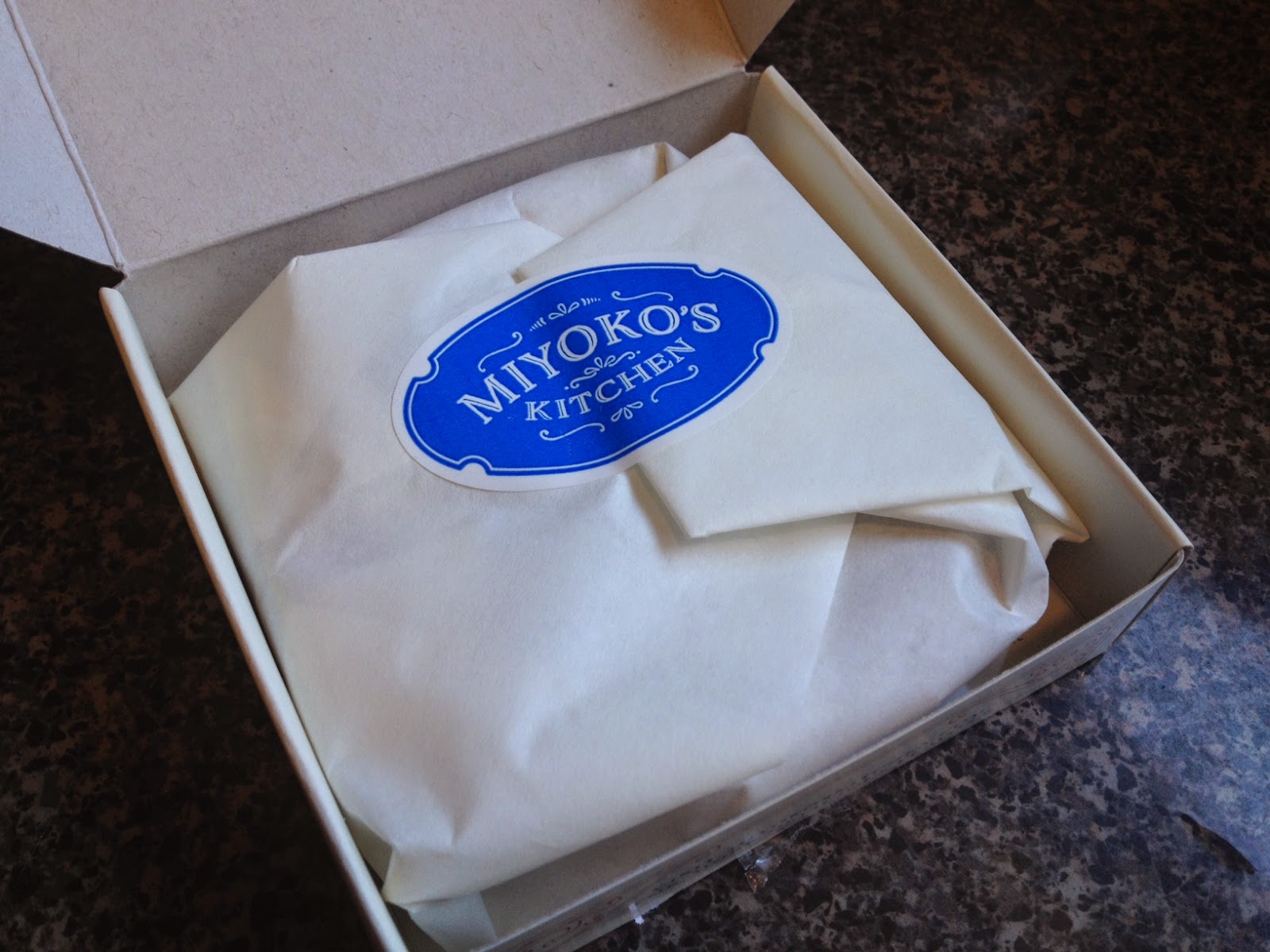 It's like a little present just waiting to be ripped open! 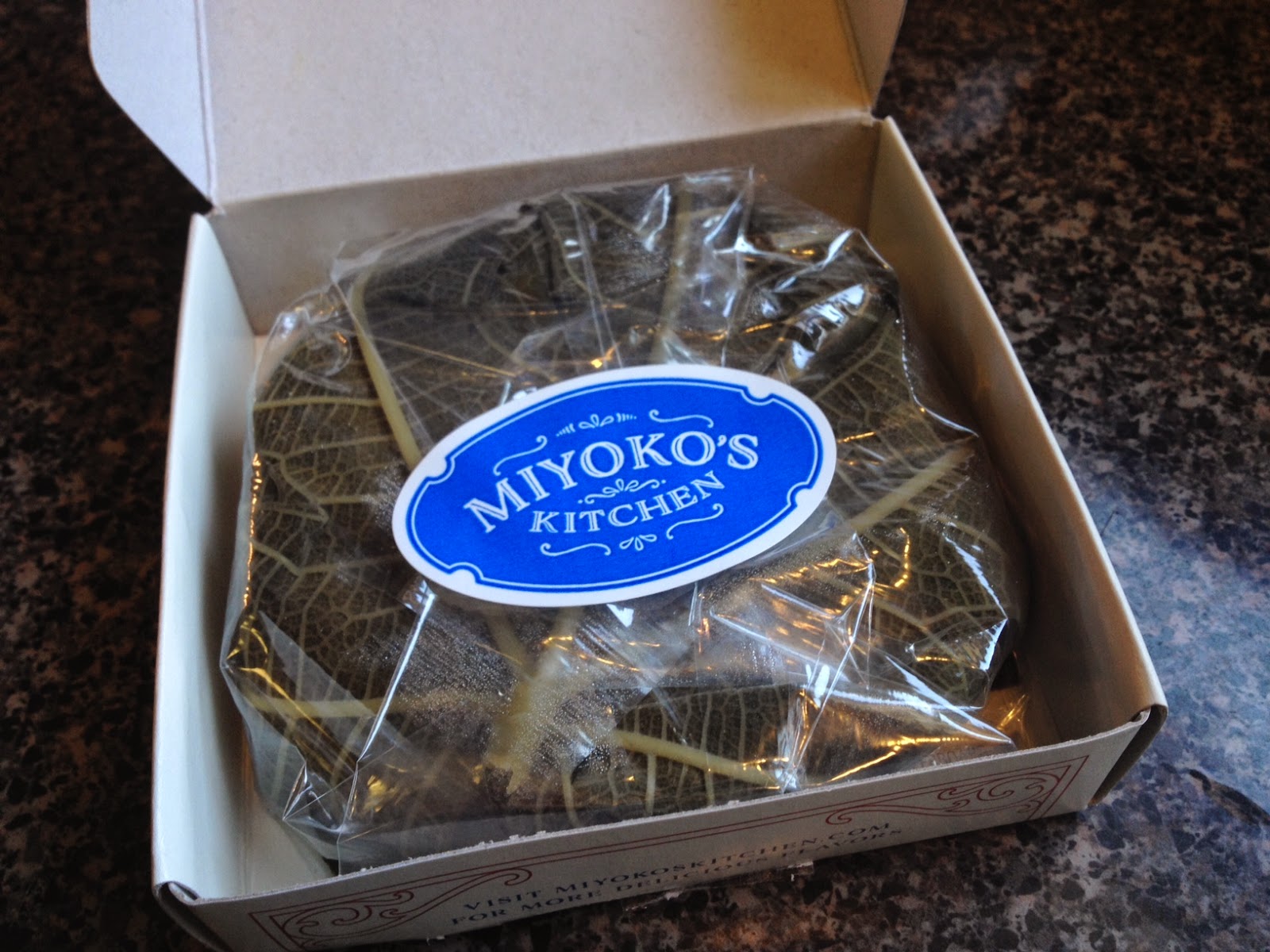 Although I hoarded most of this cheese for myself, I did manage to share two wheels at my October dinner party for our soon-to-come Veggin' Out webisode series. I brought out the Fresh Loire Valley in a Fig Leaf and the Aged English Smoked Farmhouse.

The Fresh Loire Valley in a Fig Leaf was impressive as hell. This cheese is seriously wrapped in a wine-soaked fig leaf! At first, we weren't sure if we should eat the leaf, but I braved a bite and realized it had a mild flavor that actually complemented the soft, tangy wheel. Great with crackers! Several dinner party guests declared this to be their favorite of the two. 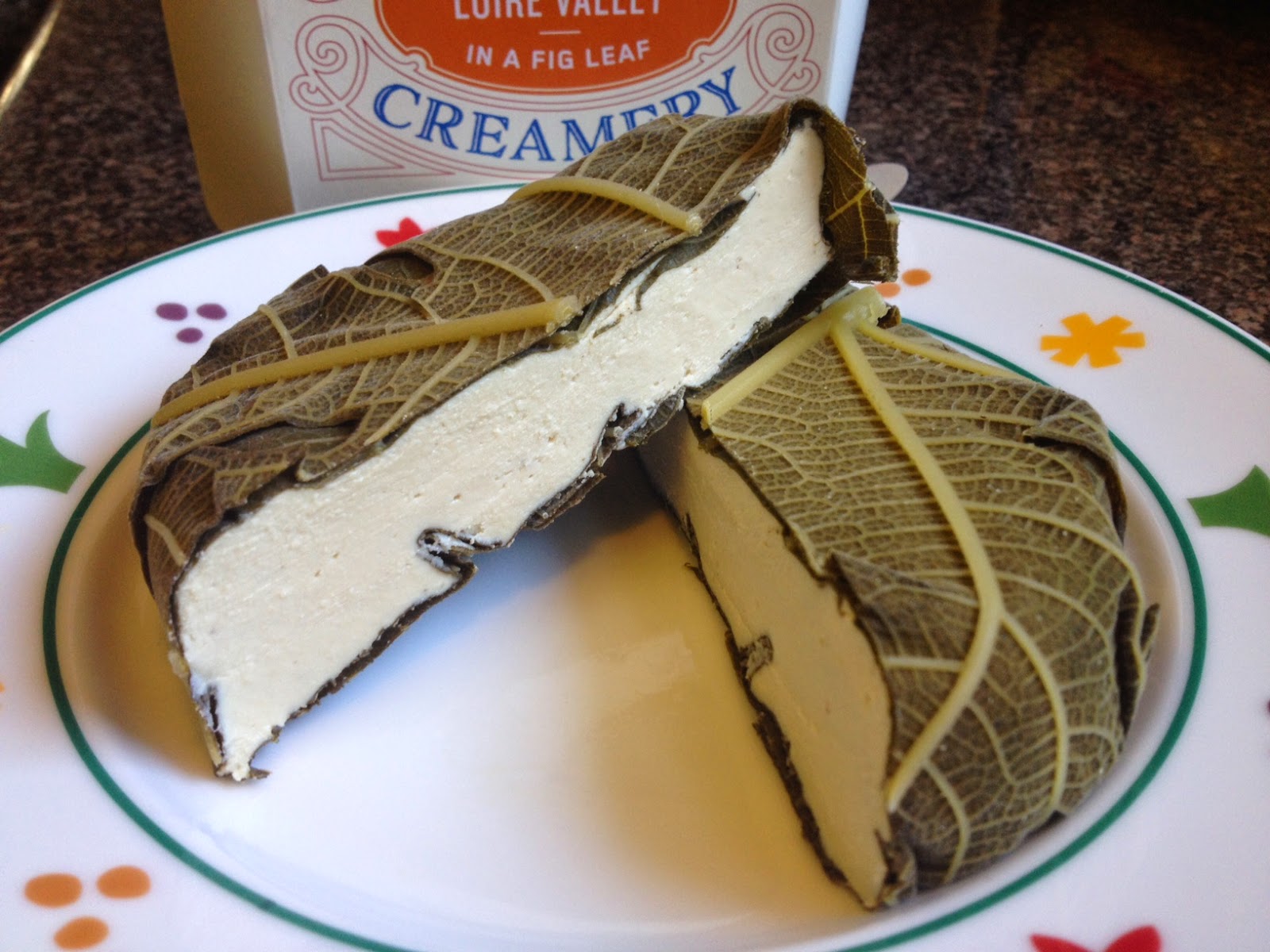 But my fave of the two was the Aged English Smoked Farmhouse. In fact, this was probably my second favorite cheese of them all! This semi-hard cheese was much more firm than the Loire Valley cheese, so slices held together well. And I'm a fan of anything with a smoky flavor. We enjoyed it on crackers, but this would also be lovely sliced and served on a vegan turkey sandwich. 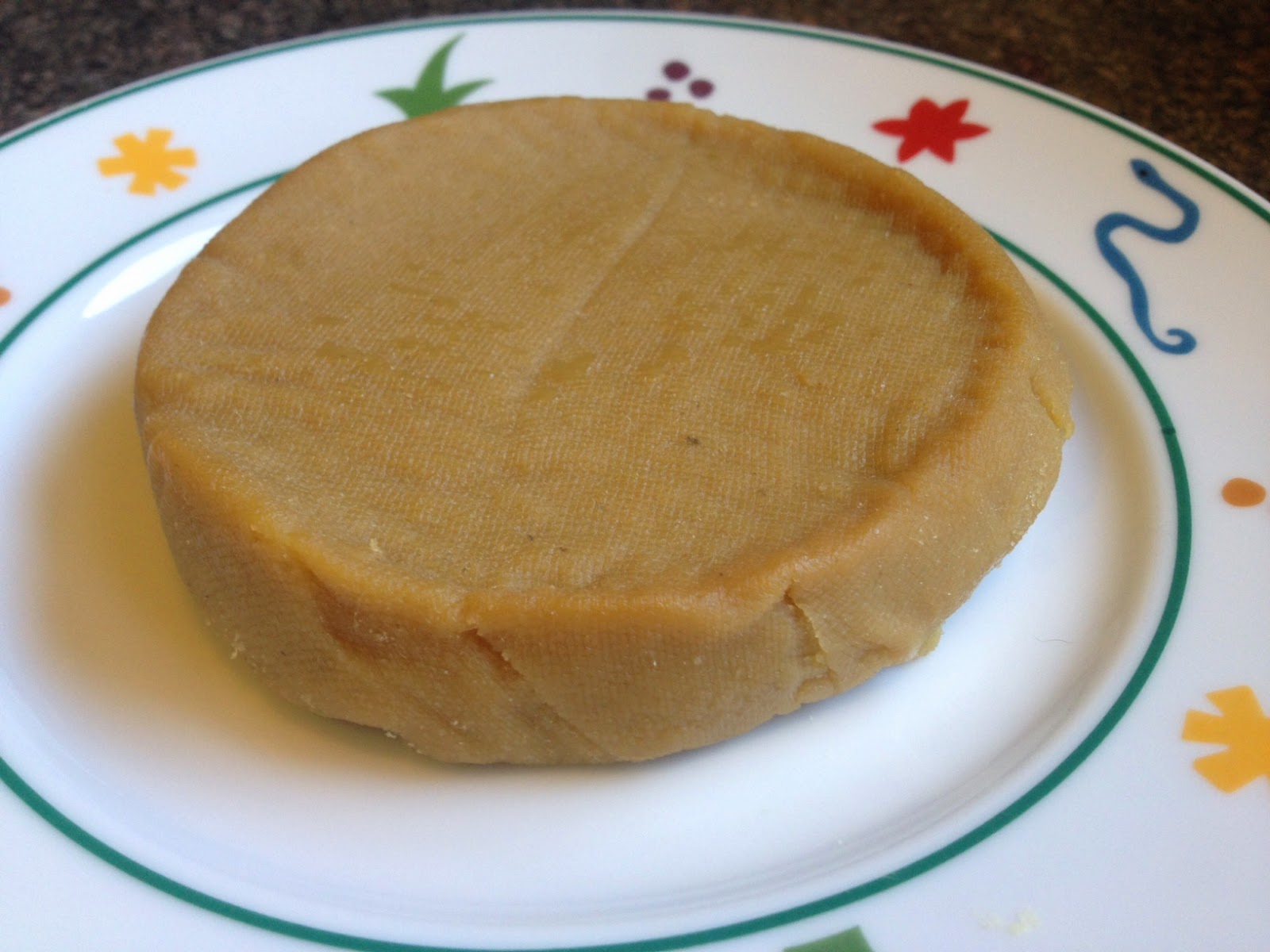 A few days after that party, I opened Country Style Herbs de Provence. This is a tangy semi-hard cheese that's completely coated in herbs. There's lavender, maybe some oregano and thyme. I'm not really sure what combination of herbs were used, but there's a LOT of them. 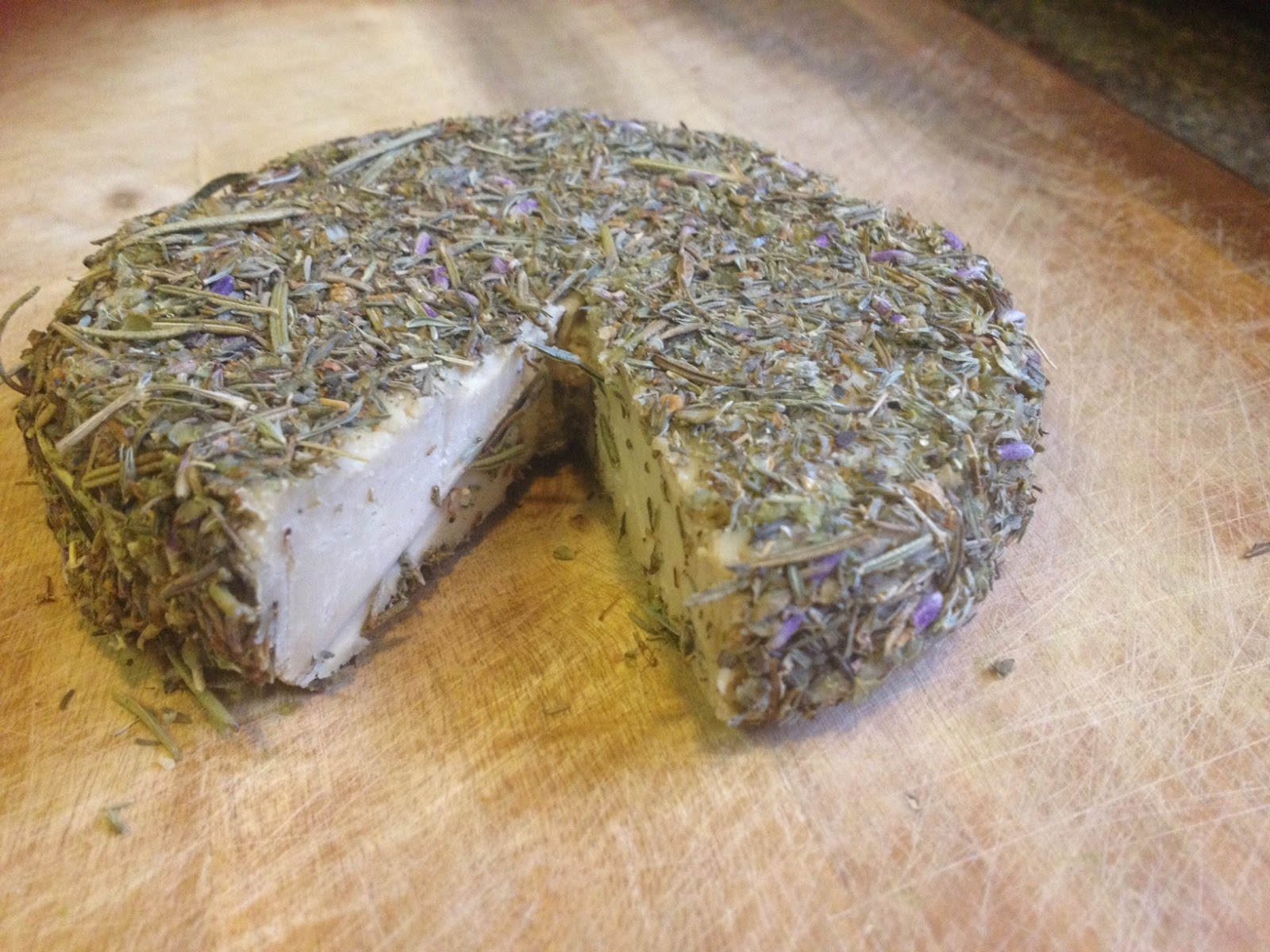 I thought maybe this cheese would be best enjoyed crumbled over a salad, and I think I was right. Here's a simple salad with Field Greens, Country Style Herbs de Provence, and a Raspberry Balsamic-Olive Oil Vinaigrette. The tangy cheese paired perfectly with the bitter greens and tart-sweet dressing, and since the herbs got coated in balsamic vinegar, they were a little softer and easier to eat than dry herbs. 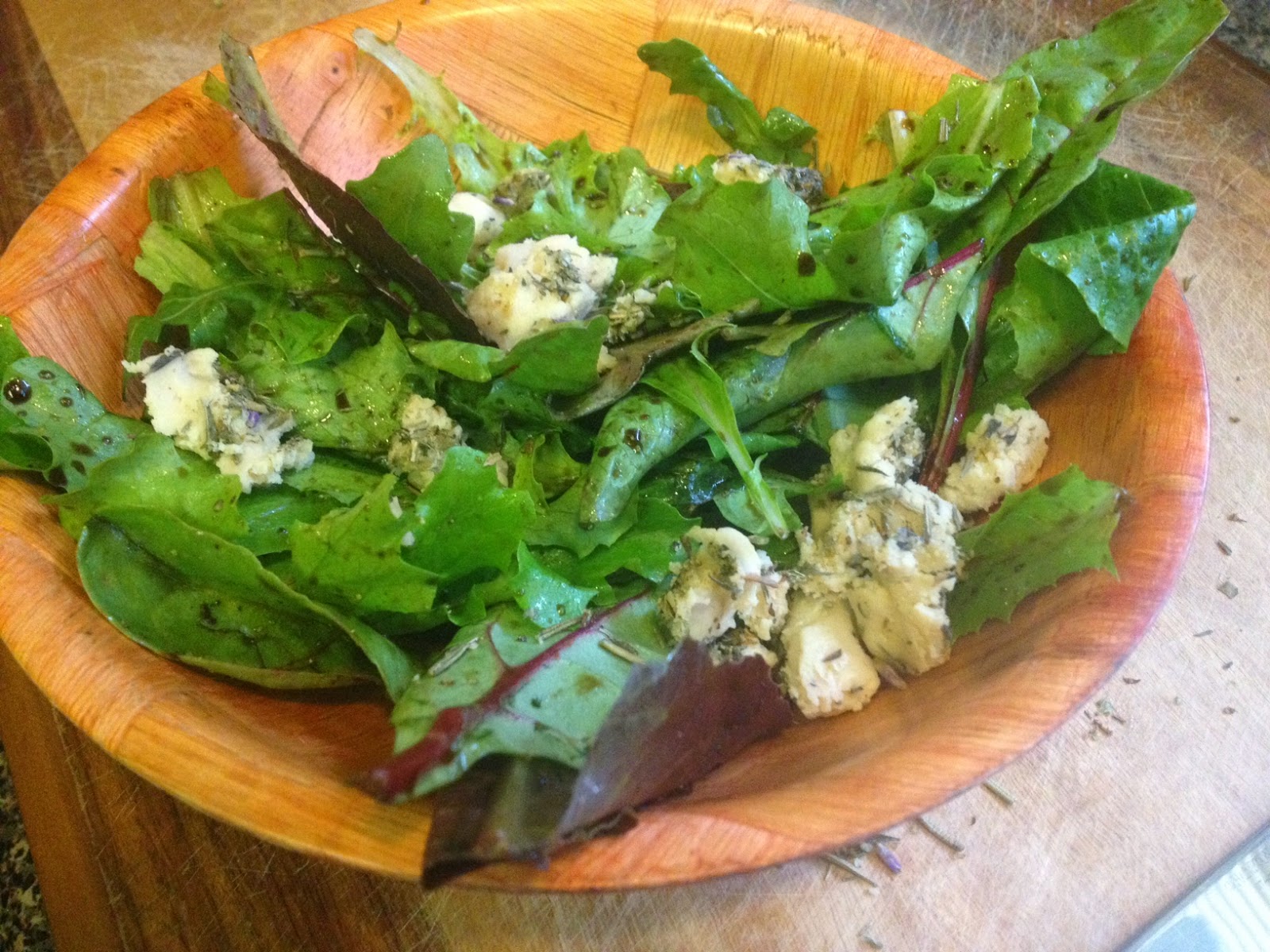 One thing I didn't pay attention to when prioritizing which cheeses to try first was the expiration dates. My package arrived in early October, and a couple of the cheeses expired earlier than others — one by the end of October. Others are good through January. Well, sadly, the French Style Winter Truffle was coated in mold when I opened it past the date. Of all the cheeses, it has the shortest shelf life. But never fear!! I just cut that mold right off, and hiding underneath was perfectly good cheese. Waste not, want not.

After cutting off the mold, I enjoyed the French Style Winter Truffle (on the left) and the Double Cream Sundried Tomato Garlic (on the right) with crackers, vegan pate, wine, and grapes one night for dinner. I love simple meals like that. Look! They're like little Pac-Mans!! 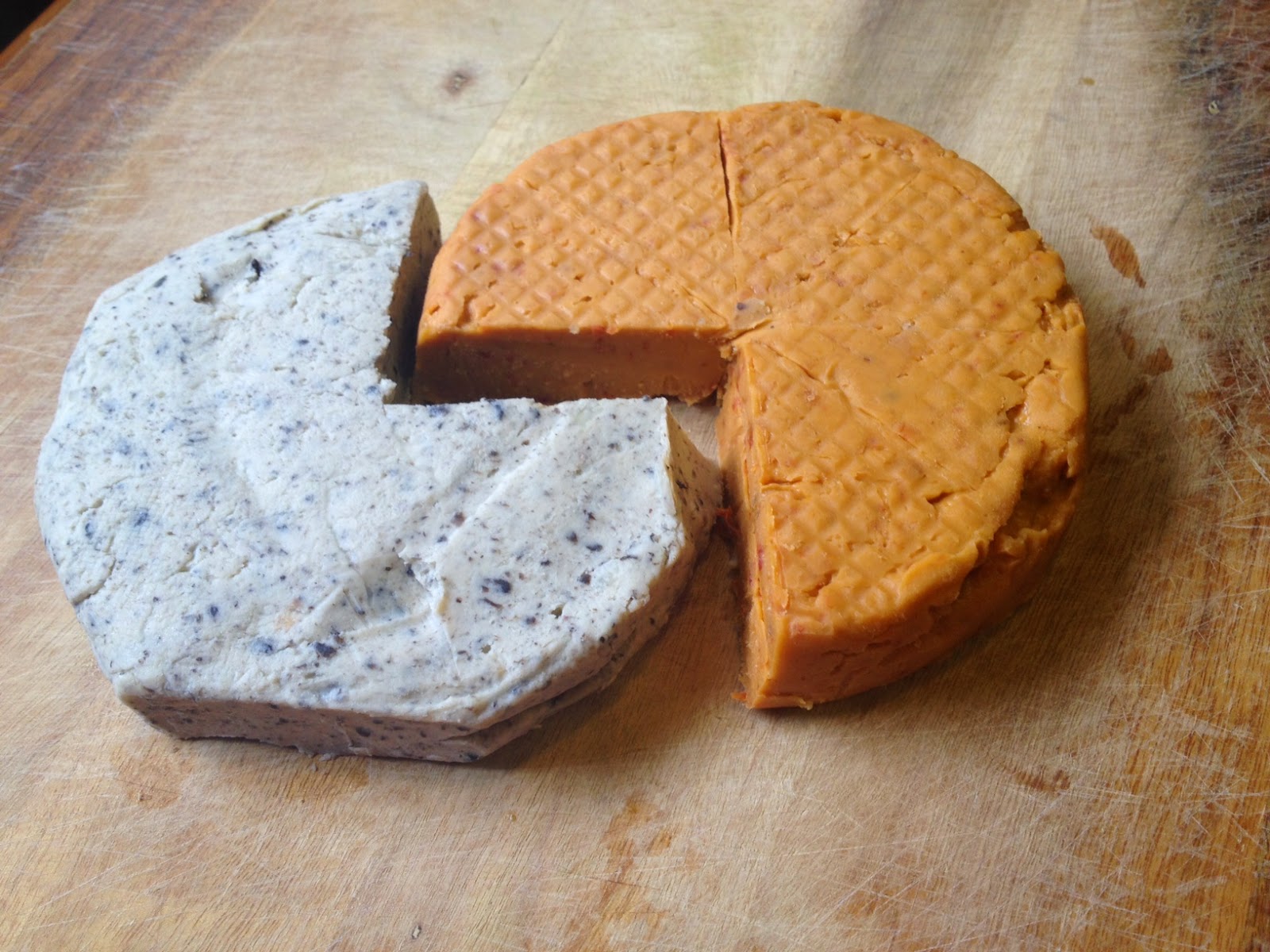 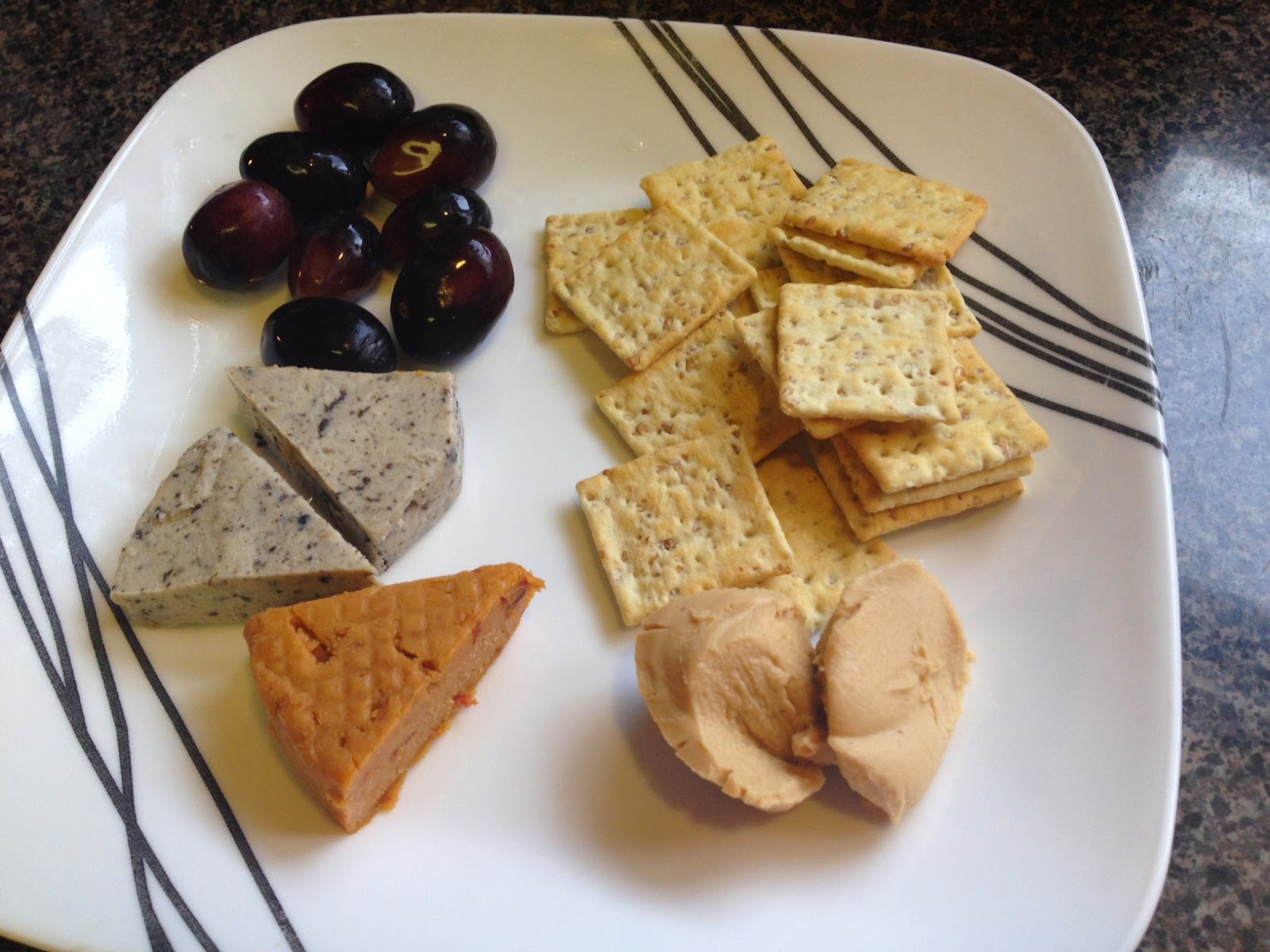 Hands down, the French Style Winter Truffle was my favorite cheese of all!! I'm so glad I took a chance and cut that mold off. Miyoko did not skimp on fancy truffles in this cheese. They're peppered throughout, and this cheese boasts a strong truffle flavor. It's soft, woodsy, earthy, magical. I will be ordering this one again!

The Double Cream Sundried Tomato Garlic was great too! It's a creamier cheese but still very sliceable. The sundried tomatoes add a rich umami flavor and a tanginess that's accented by the garlic. This cheese is made with chickpea miso, which adds to that deep flavor. I enjoyed both cheeses on crackers, but the sundried tomato cheese was just calling for something more. Something like this! 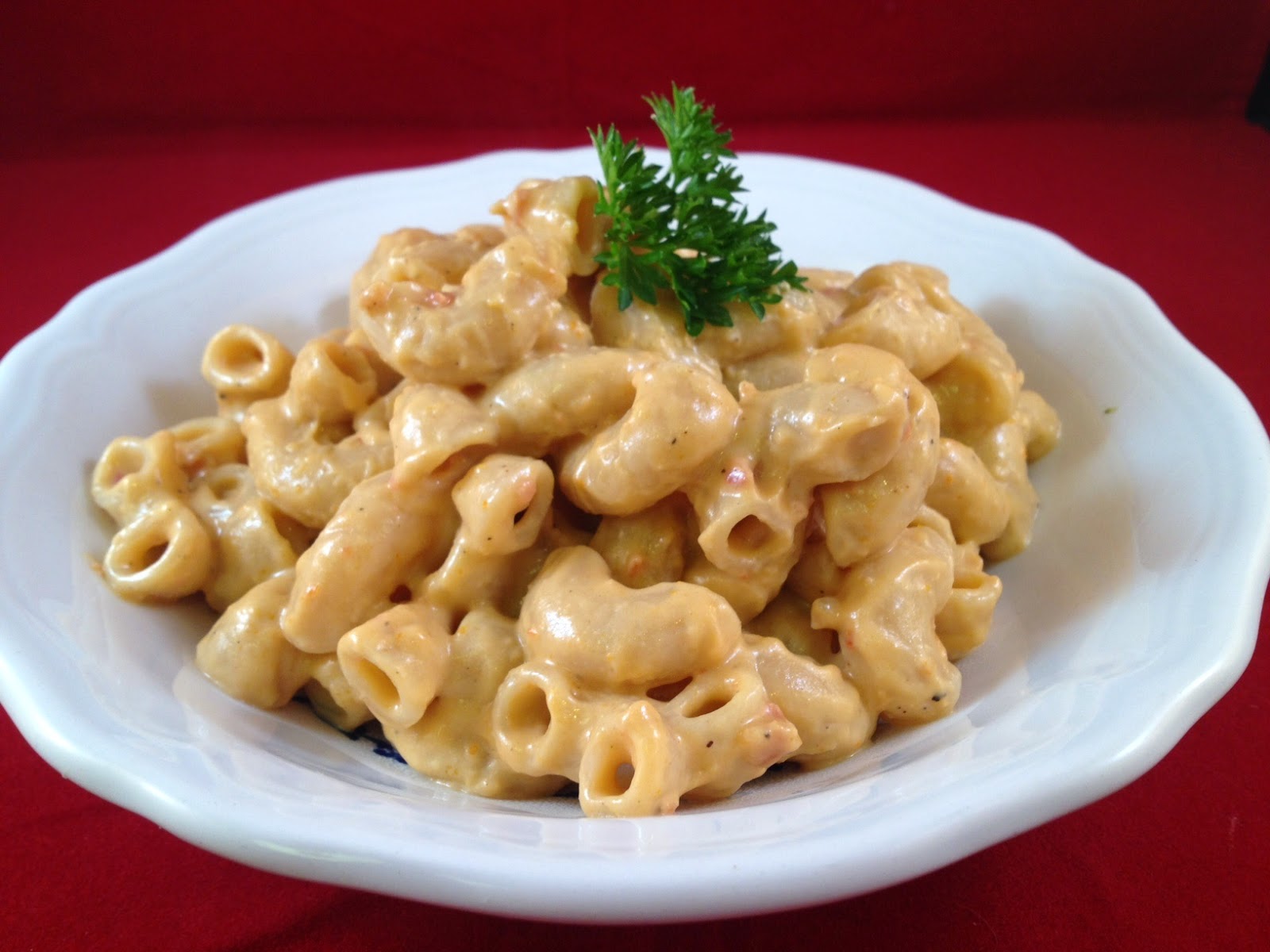 That's kamut elbow noodles coated in melted sundried tomato garlic cheese! I just melted the cheese in a saucepan with a bit of almond milk, and it made a creamy, rich sauce in no time. I would highly recommend that with this cheese.

The Classic Double Cream Cheese Chive is like a plain version of the sundried tomato, and IT IS SO GOOD! I'm a sucker for any creamy cheese sub with chives mixed in, and this one is loaded with chives. It's super soft and spreadable. 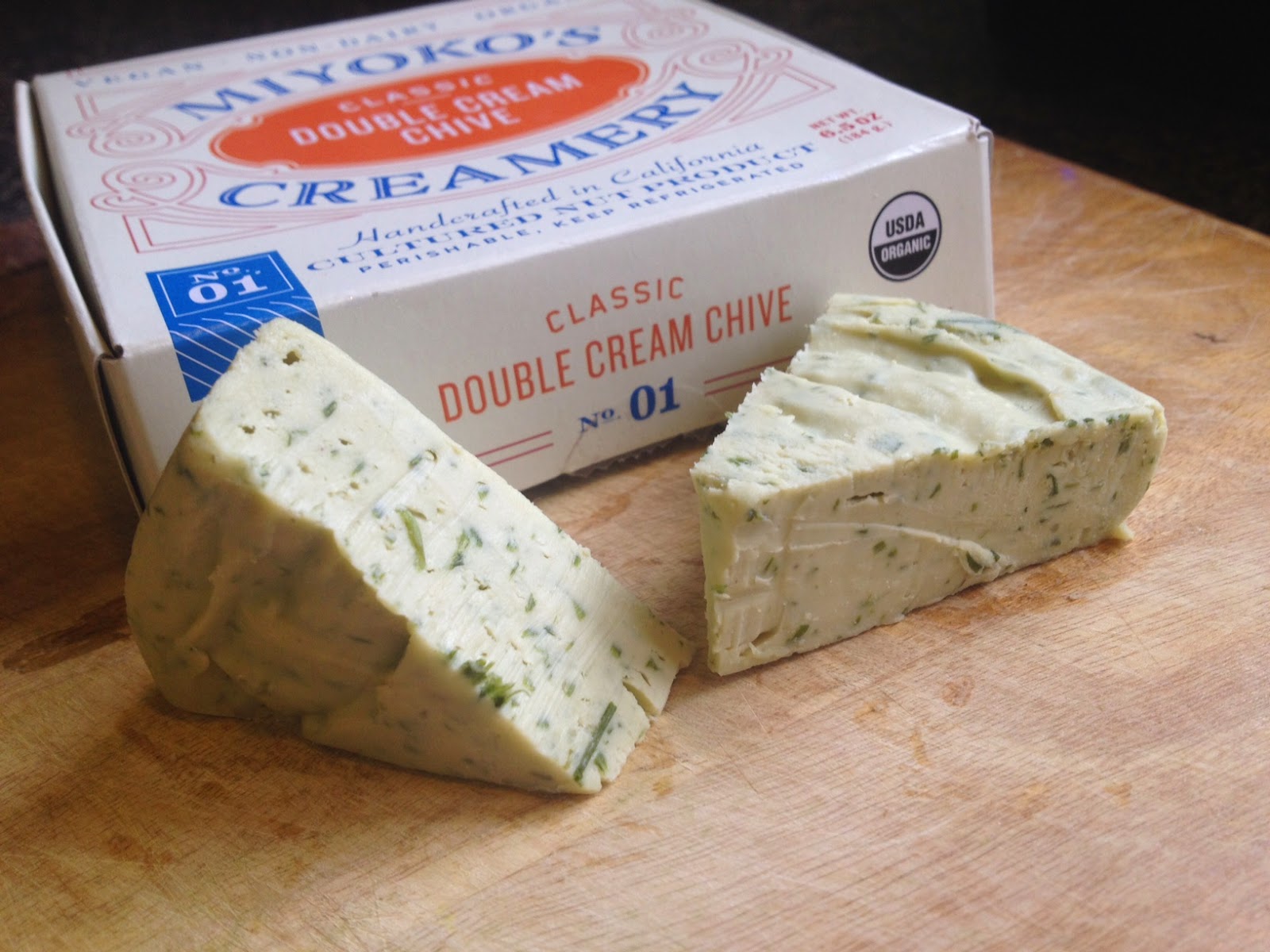 So of course I had to try it on bagels! My favorite way to enjoy this cheese was schmeared on whole wheat bagel thins with little blobs on roasted garlic & onion jelly. 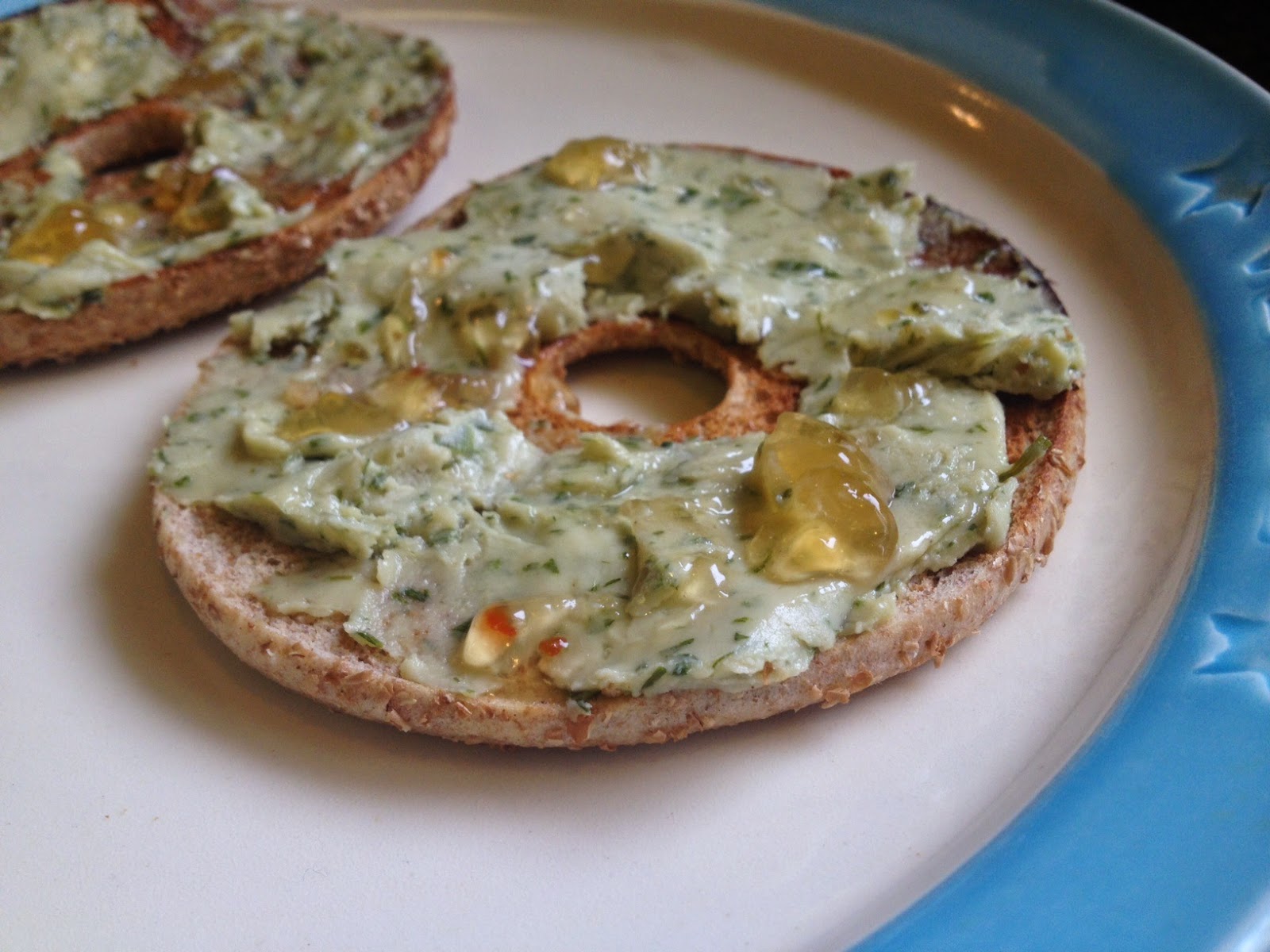 Just this past week, I've been enjoying my last two cheeses — High Sierra Rustic Alpine and Aged English Sharp Farmhouse — with multigrain crackers, dolmas, and wine. But I wanted to try them other ways too.

The Aged English Sharp Farmhouse is very similar to the smoked farmhouse, only minus the smoky flavor. It's sort of your basic straight fancy sharp cheddar. It's a harder cheese that's great on a cracker. But it also makes for a damn fine cheesy bread topping. I broiled some over slices of multigrain baguette this week to eat with some bean soup. It didn't get super melty as I'd hoped, but it sort of melted in your mouth when you bit in. 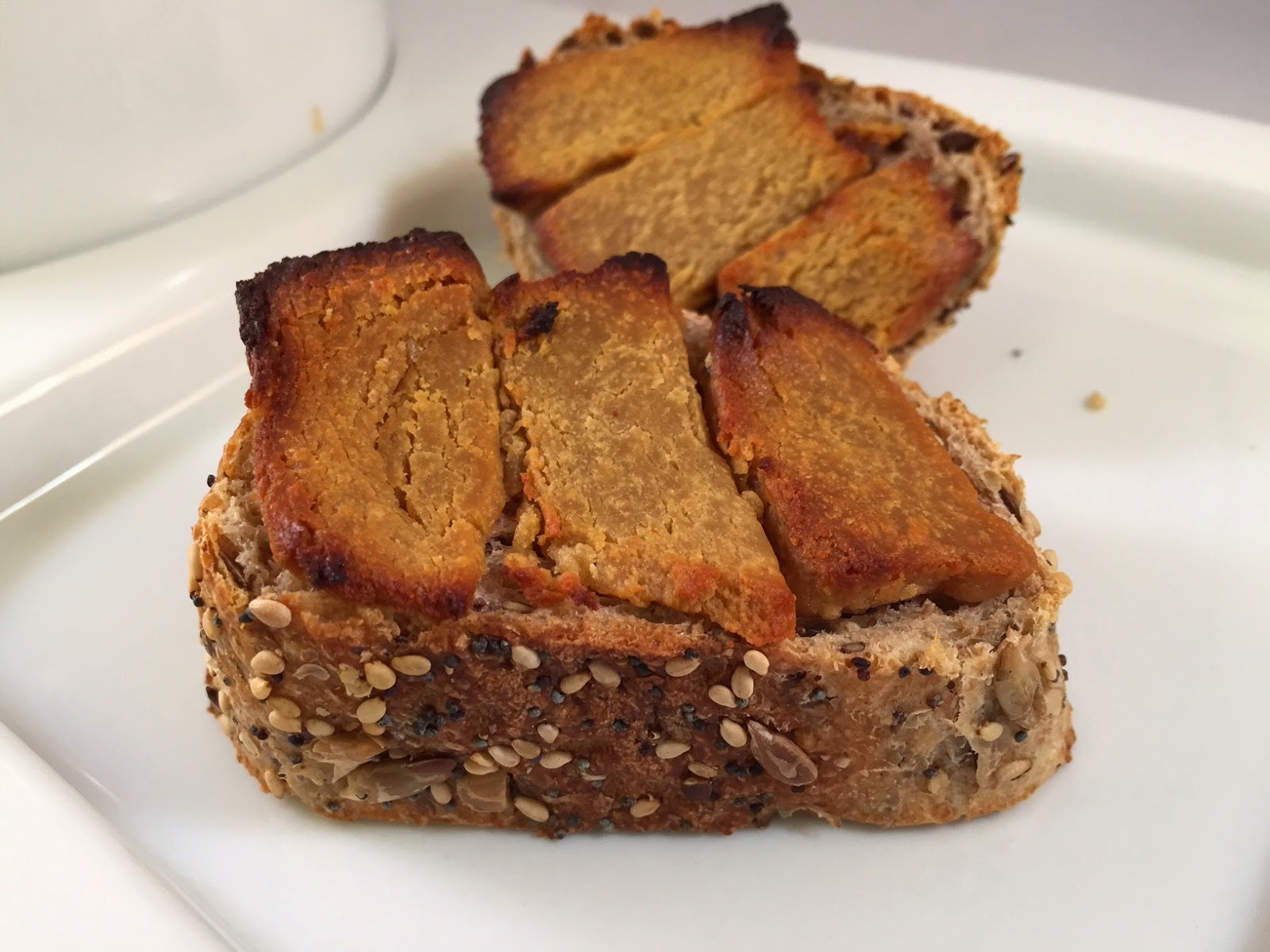 The High Sierra Rustic Alpine is a semi-hard nutty cheese with a sweet buttery flavor. It's a bit hard to describe, but if you can imagine the flavor of a cheese that seems suited for a risotto, that's it. It'd be nice with fruit, and I enjoyed it with crackers. But I just kept thinking, "Risotto!" So I made some.

This was definitely the best risotto I've ever had. I melted half a package of the High Sierra Rustic Alpine in it, and it made for the absolute creamiest, dreamiest risotto ever. I know asparagus is so not in season, but it seemed like a veggie that would pair well with this cheese, so I added that, plus some fresh thyme and lemon juice. 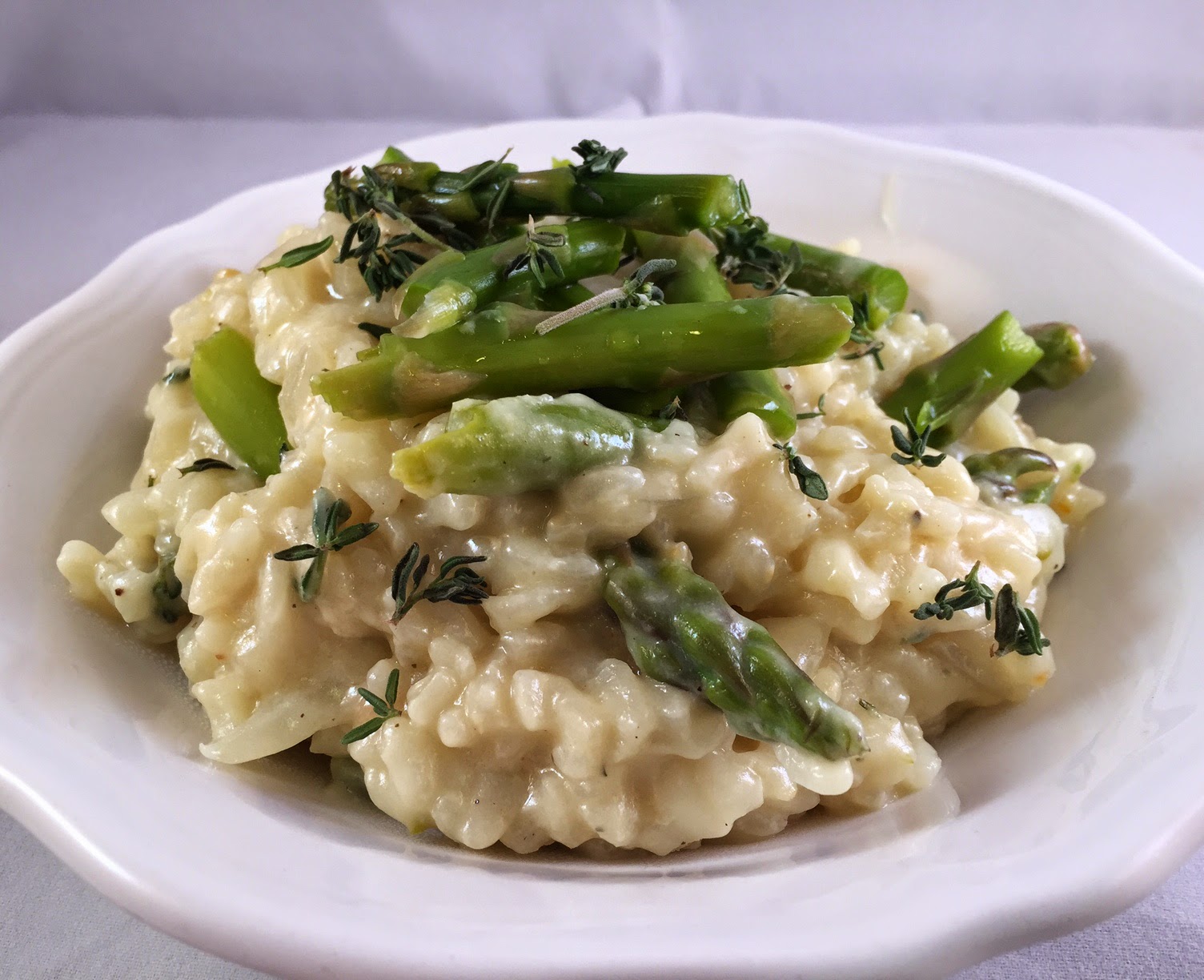 It wouldn't be fair if I didn't share the recipe, right? I used this recipe from Eating Well as a guide, but I veganized it. Here ya go.

Bring broth to a simmer in a medium saucepan over medium-high heat. Reduce the heat so the broth remains steaming, but is not simmering.

Put the asparagus in a steamer basket and turn the heat on high. Steam for about 7 to 10 minutes or until asparagus is just tender but still firm. You want it to have a little bite. Remove from heat when it's done and set aside.

Meanwhile, heat oil in a large stockpot over medium-low heat. Add onion and cook, stirring occasionally, until softened, about 2 minutes. Add garlic and cook, stirring, until fragrant, about 30 seconds. Add rice and salt and stir to coat.

Stir 1/2 cup of the hot broth and a generous splash of wine into the rice. Cook, stirring frequently, until the liquid has been absorbed. Continue to cook on medium-low, adding broth in 1/2-cup increments followed by a splash of wine, and stirring frequently after each addition, until most of the liquid is absorbed. The risotto is done when you’ve used all the broth and wine and the rice is creamy and just tender, 25 to 35 minutes total.

Remove from the heat. Stir in nut cheese, asparagus, thyme, lemon juice, and pepper. Stir until the cheese is melted.
Posted by Bianca at 11:10 PM

Did you just create my Christmas list? Why yes, yes you did.

Oh wow, I'd definitely order some if I lived in the States. The packaging is so pretty too!

Dang, that looks so good. I want one of each!

Thanks for the recipe! I ordered that same sampler pack and finished it off a couple of weeks ago . . . and I immediately ordered the Holiday sampler when I got the e-mail for it's pre-order. I'll def be making this risotto

Oh my gosh. I want ALL THE CHEESES! I've been dreaming of having a wine and cheese night with some friends for the holidays, and now I know what cheese to get. YUM!

These look so good. I want them all!!

I'm drooling and SO jealous right now! I have her book but haven't made anything from it. Clearly I need to. Or, you know, just order some ;)

Thanks for the risotto recipe. I have a box of High Sierra Alpine in the fridge and wasn't quite sure what to do with it.
Reviews are spot on. LOVE Miyoko's!

I love everything about this post!!! Must order some of those cheeses ASAP!!

I'm SO excited to try these in May! I think this is the most excited I've been about a product EVER!

Wow, I can hardly wait to try these! Hopefully she'll share them again at VVC in 2015...I'll be there!