I finally finished a half-marathon!! Last year, I set a goal to run a half in 2013 and a full marathon in 2014, and then halfway through training for the October 2013 half-marathon I'd signed up for, I got a stress fracture in my foot. And even though it wasn't terribly painful, it was apparently a pretty bad break because it took six months to heal. I even wore a walking boot for several months and had to use a bone stimulator for 10 hours a day! My running dreams were smashed —at least for awhile. 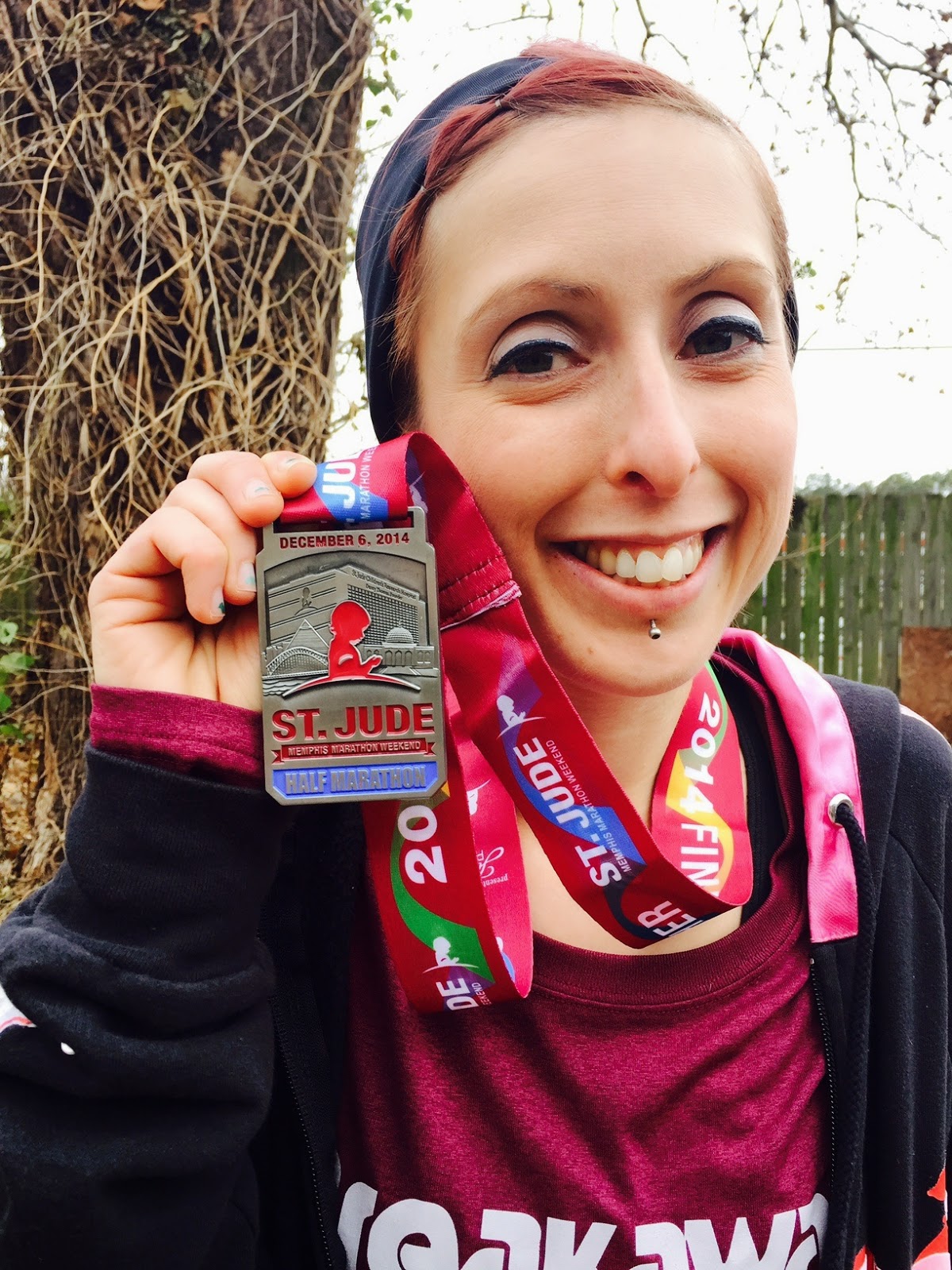 And that made yesterday's personal victory of finishing the St. Jude Half-Marathon all the more special.

Before I broke my foot, I looked at my half-marathon goal as a mere stepping stone to my bigger goal of running the full 26.2 miles. But after my foot healed, I had to start completely over. We're talking couch to 5K. It took me a lot longer to get to the 13.1 than I'd ever dreamed it would. But I'm nothing if not stubborn, and if my body tells me I can't do something, I try even harder. While my injury really sucked at the time, it made me appreciate the stepping stones. It made me all the more grateful that I was able to finish yesterday's race.

It took me 2 hours and 48 minutes to run 13.1 miles, and that's really slow. But my goal was simply finishing. I didn't care how slow I was. I'll work on my fast game later.

Here's a little half-marathon weekend recap. It started on Friday night with the St. Jude Expo, where Cassi, her co-worker, and I picked up our race packets and shopped for new running supplies! I got two new running shirts and some YurBuds headphones, the first headphones I've ever worn that do not fall out of my tiny ears. 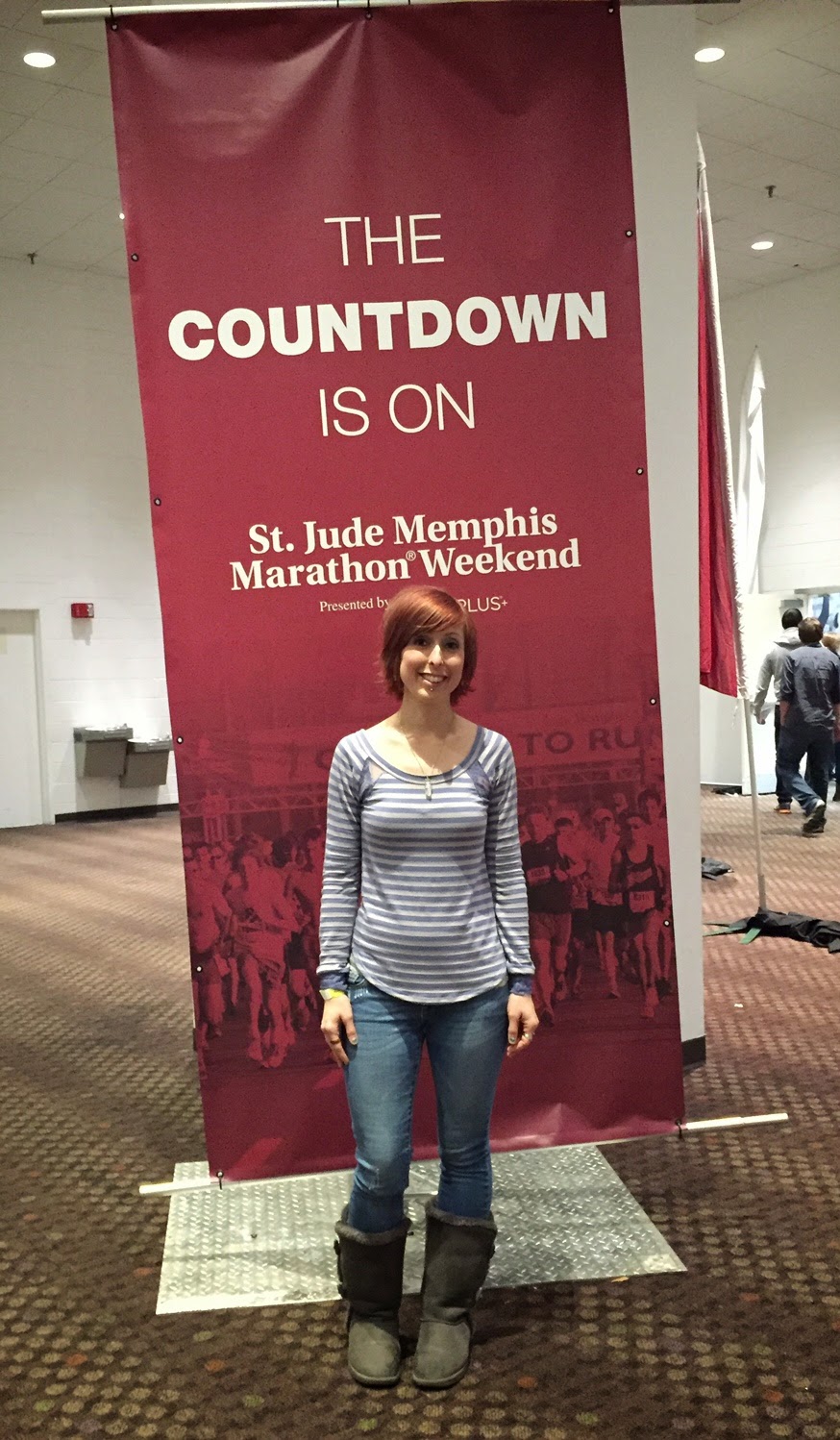 Then I went home and had some dinner. I'd always heard about "carb-loading" the night before a big race, but from what I've read in Runner's World over the years, that's sort of a myth. So instead, I opted for a balanced meal with whole grain carbs, protein, healthy fat, and greens. I used some of the Target brand Simply Balanced Miso Mushroom Meatless Turkey (Have y'all had this yet? It's awesome!), Himalayan red rice, sauteed Swiss chard, and a homemade miso-tahini sauce to create this Greens & Grain Bowl. 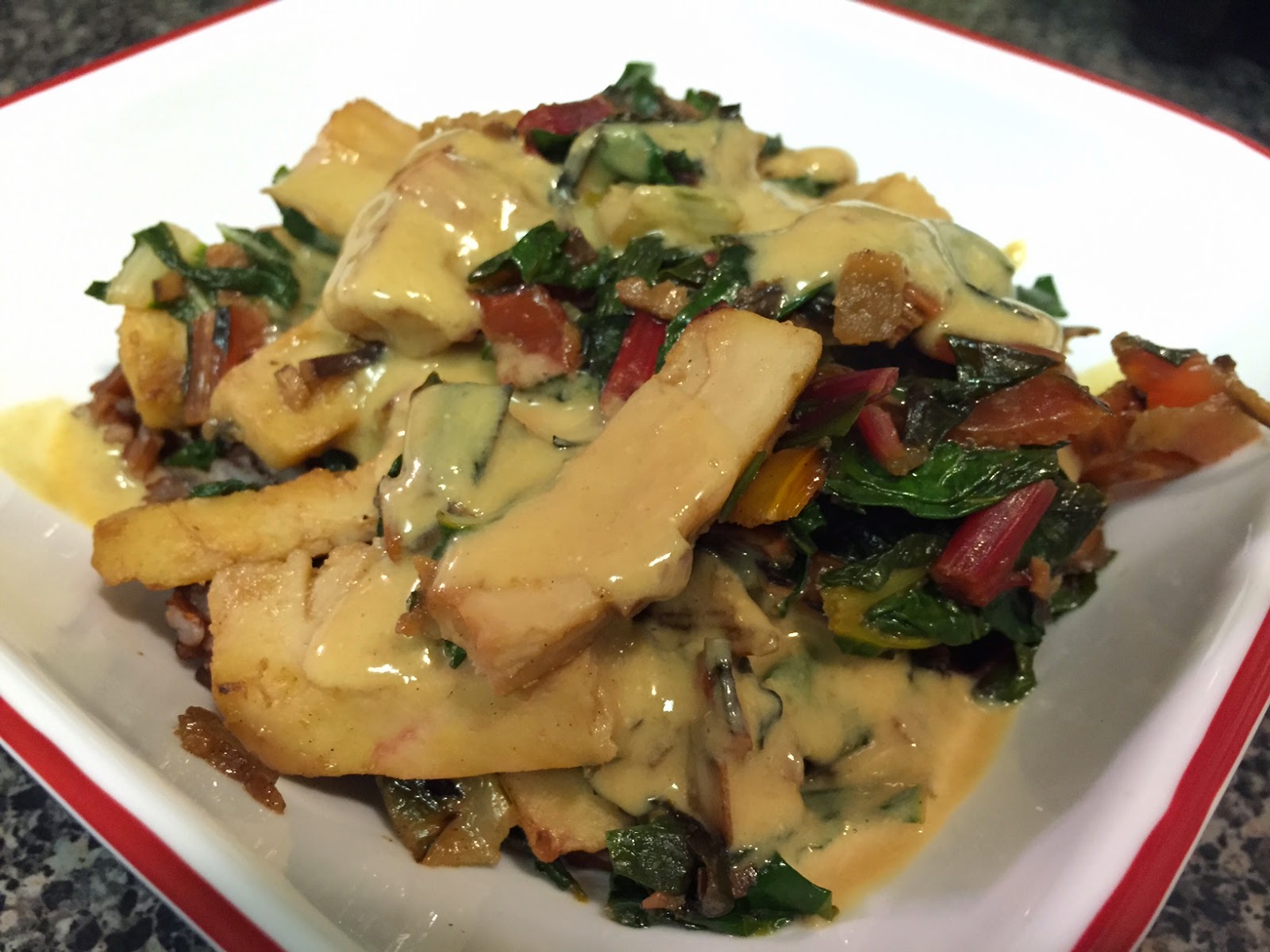 Yum! This was nice and filling, but it didn't leave me feeling bloated or anything the next day. I woke up at 5 a.m. on Saturday since my race began at 8 a.m. I read somewhere that you should have a light breakfast two hours before the race and then a banana one hour before. So at 6 a.m., I had Sprouted Grain Toast with Sunflower Seed Butter and Bee-Free Honee. On short runs, I usually just eat dates, but for my long training runs, toast with nut butter and honee always did the trick. 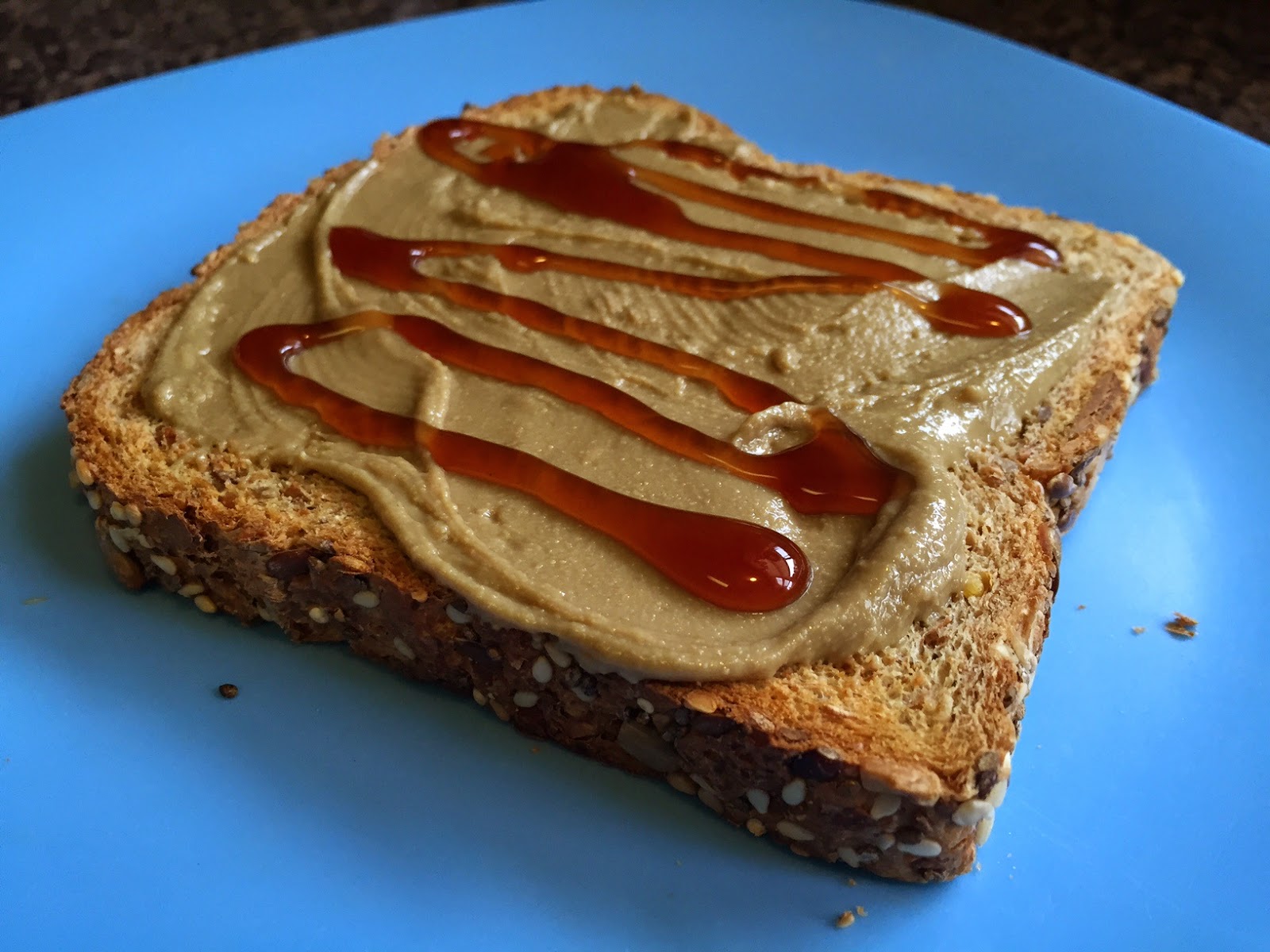 And then I drove downtown to AutoZone Park, where we were supposed to check our bags and stuff. Around 7 a.m., while milling around the park and trying to stay warm (I'd already checked my bag with my hoodie in it. Oops!), I enjoyed this banana. 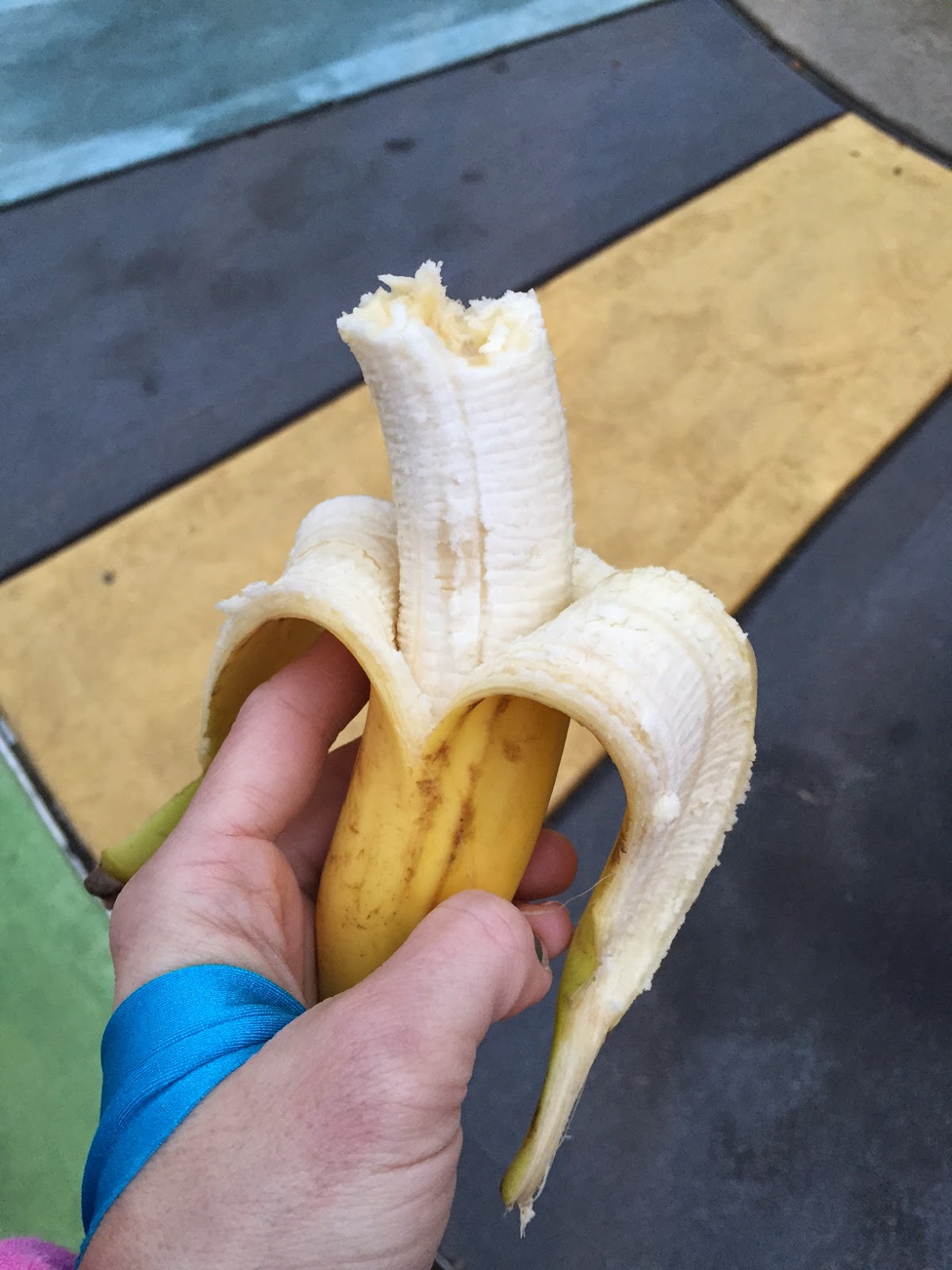 Then it was time to line up for the race! There were 15 corrals, and you picked which one you should be in based on your average pace per mile. I run about a 12-minute mile, so I picked Corral #12. At around 8:22 a.m., my corral was off!

Just like with most of my training runs, the first five to six miles were a breeze. Plus, we ran through the St. Jude campus (they offer free medical services to children with life-threatening diseases) around mile 4, so that was pretty cool. There were people lined up all along the course cheering us on with signs. And there were random drum corps bands, bag-pipers, and other cool attractions along the way.

Oh, and I designed a GENIUS playlist, if I do say so myself, with inspirational poppy songs carefully selected for each mile. Iggy Azalea's "Impossible Is Nothing," Eminem's "Lose Yourself," Kelly Clarkson's "Stronger," and DJ Snake & Lil' Jon's "Turn Down For What" to name a few. Crazy things were happening with that playlist! "Eye of the Tiger" came on right as we ran past the Memphis Zoo! I paused Taylor Swift's "Shake It Off" to use the porta-potty at mile four, and when I hit play again as I was taking back off, it was right at the line where she says, "I'm lightening on my feet."

Anyway, Paul was able to take off long enough to cheer me on at the halfway point. He snapped this shot. 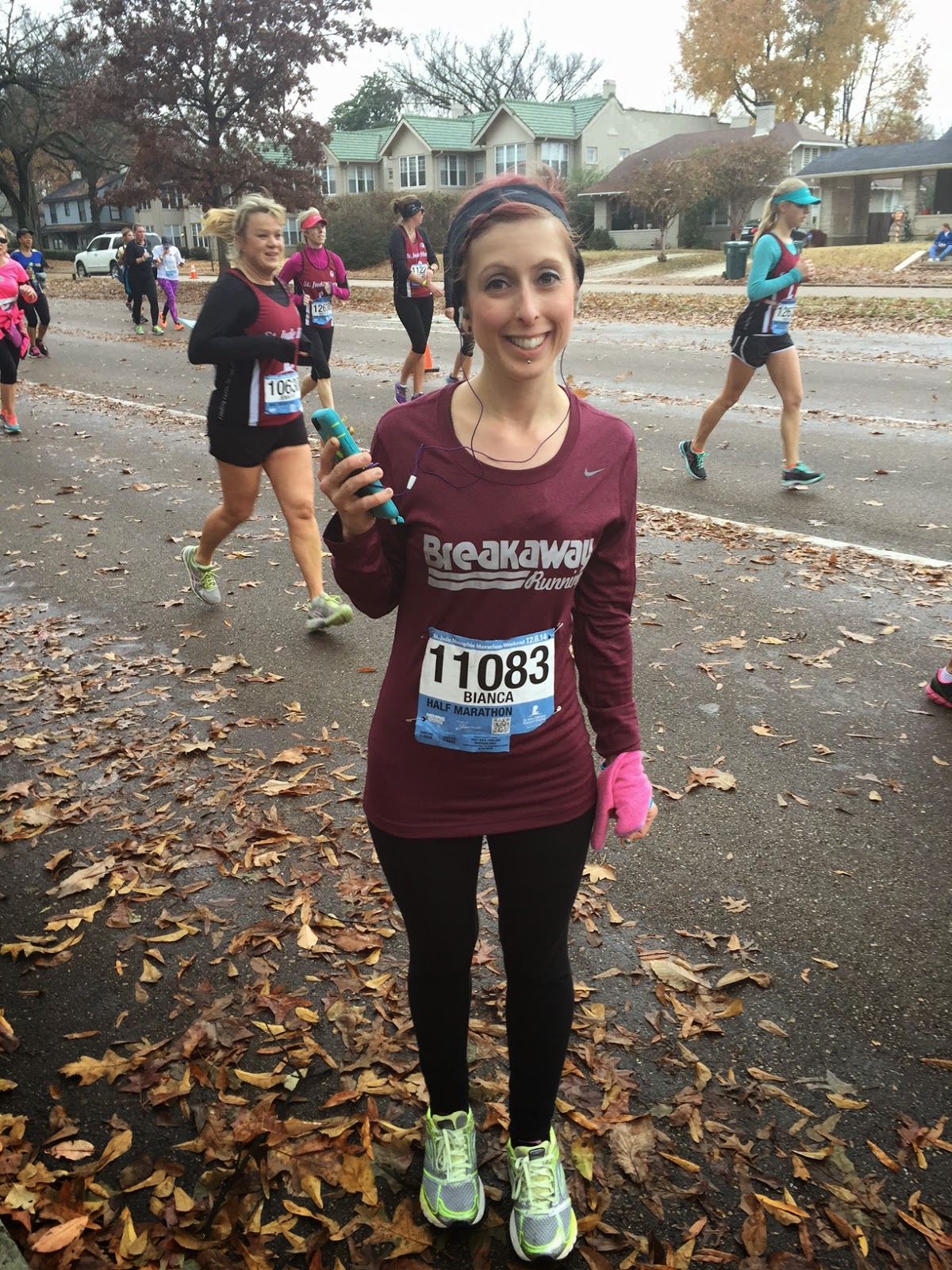 Shortly after that pic was taken, I realized my tummy was grumbling. Luckily, I'd stashed a Huma Strawberry Energy Gel in my sports bra. It was a little sweaty, but I didn't care. Love these gels! They're made with chia seeds, real fruit puree, evaporated cane juice, and brown rice syrup. 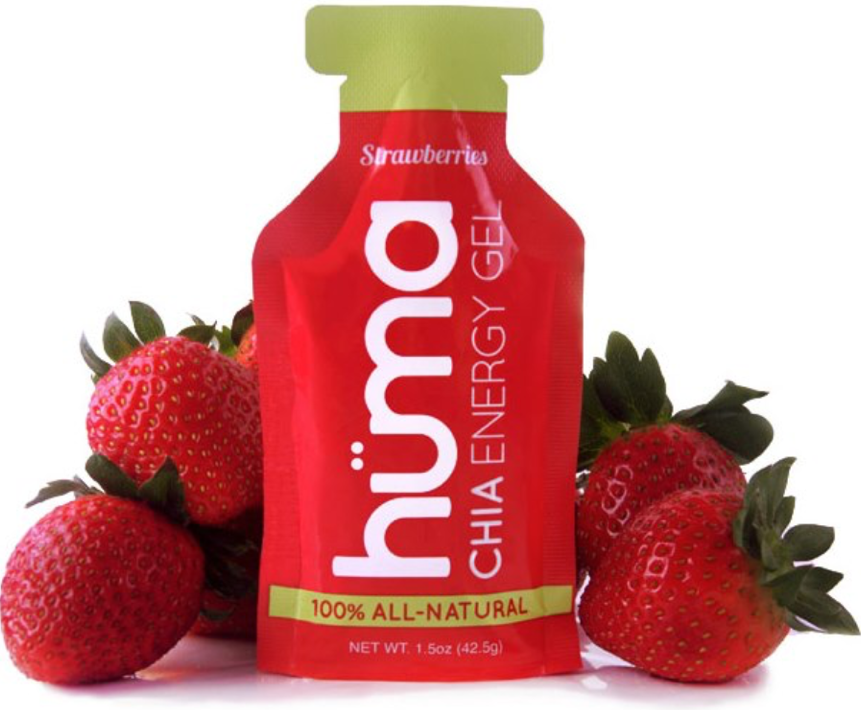 That kept me going until about mile 10. And then I realized I was hungry again. But too bad! I'd only stashed one gel. So I just powered through. The last couple miles were pretty rough. But another crazy thing happened as I approached the finish line. I was listening to Katy Perry's "This Moment," and right as I spotted the finish, this lyric played: "And when you get to the finish line/Will you wish for more time?" I remember thinking, "No! I will not wish for more time. I want this race to be over!"

But I crossed that line and IT FELT SO GOOD! Queen's "We Are the Champions" came over my headphones, and I took my medal and just basked in it for a few minutes. Once the fuzzy head "I just ran a long way" feeling wore off, I headed to the food and beverage tent. But I wasn't impressed with their very non-veg options — pizza and potato soup. I did score some fruit and crackers there, but I put those in my bag for later. I needed protein, and fortunately, I'd stashed one of these NuGo Organics Dark Chocolate Almond Bars in my bag.

Then I went to find Cassi. She ran her first 5K on Saturday, and she stayed at the after-race party waiting for me. She got a 5K medal, and she was very excited about that. I'm quite proud of her because she hadn't trained for it at all. She hadn't even run about a year. But she made it to the finish line! 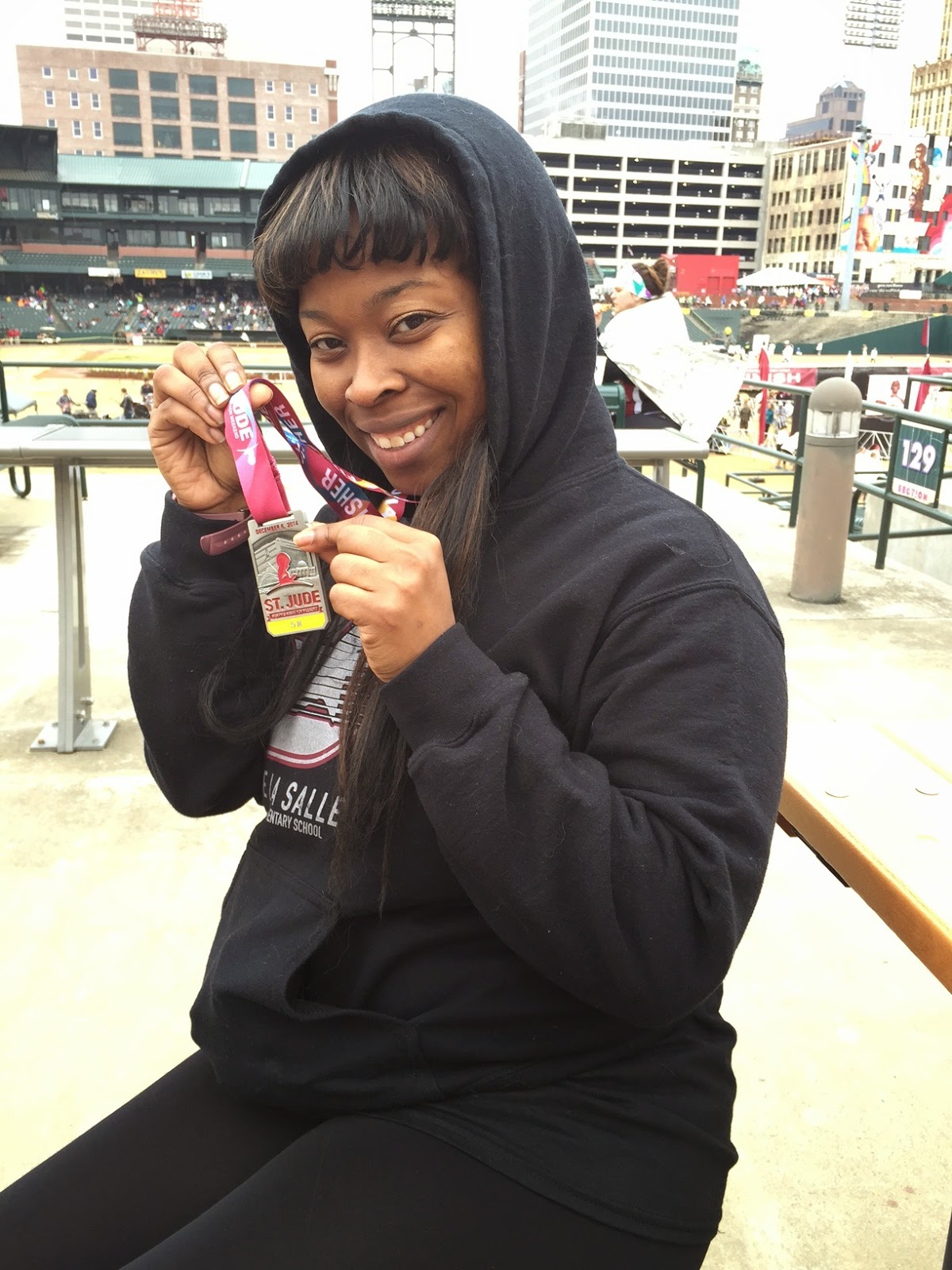 Our race bibs included coupons for free beers, so we enjoyed some Wiseacre Tiny Bombs! 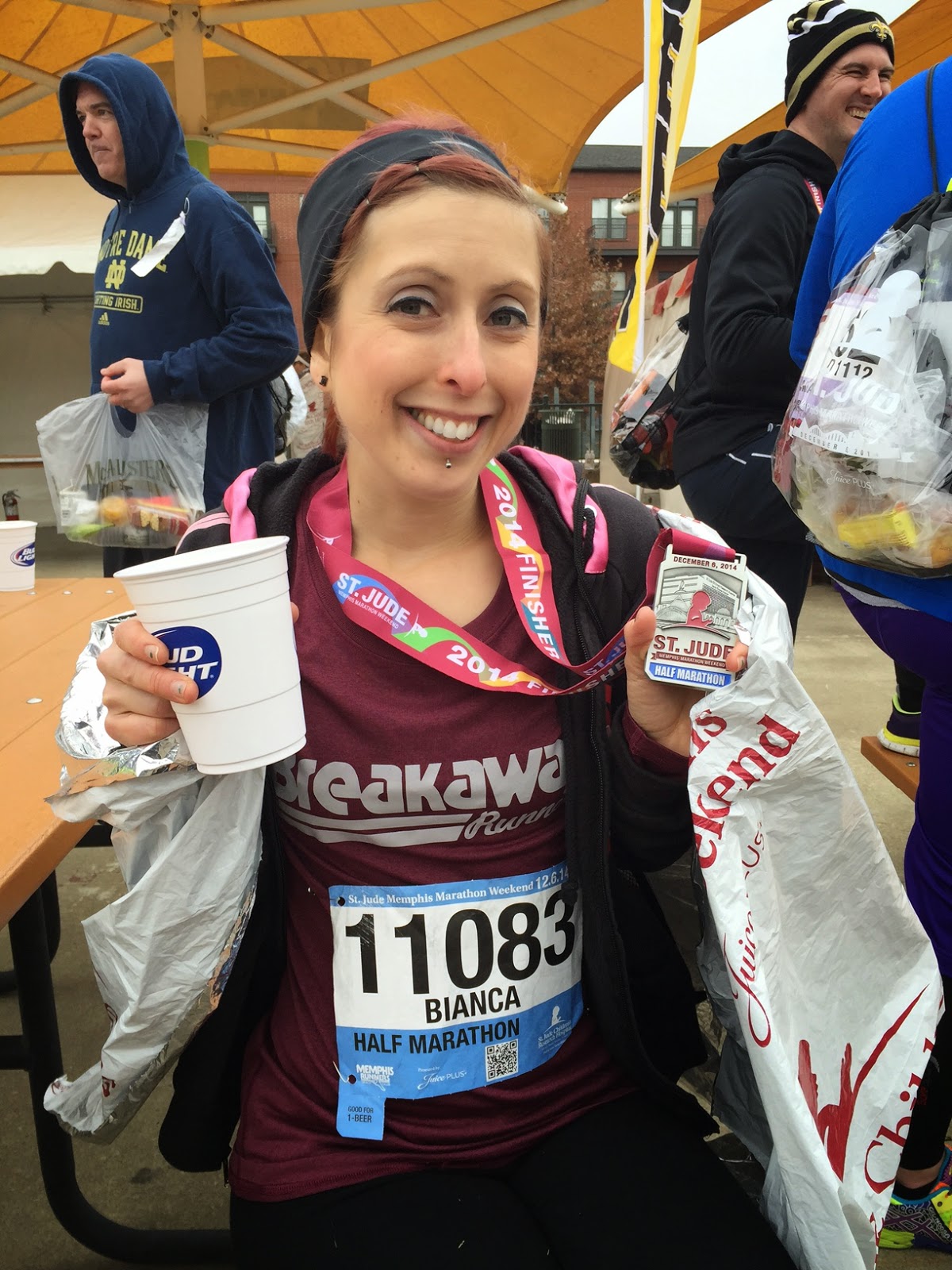 By that point, it was freezing outside. While I was running, I got pretty hot. But about 15 minutes after the race, I realized just how cold it was. I believe the temps were in the low 50s, but they were steadily dropping all morning. I used my heat blanket to try and stay warm, but after our beers, we decided to head home and get into the warm car.

About an hour after the race, I snacked on the Peanut Butter Crackers and Mixed Fruit Cup I picked up in the food and beverage tent. I don't typically eat crap like this, but it was free. And deep down, I love those peanut butter crackers. I was just craving something salty. 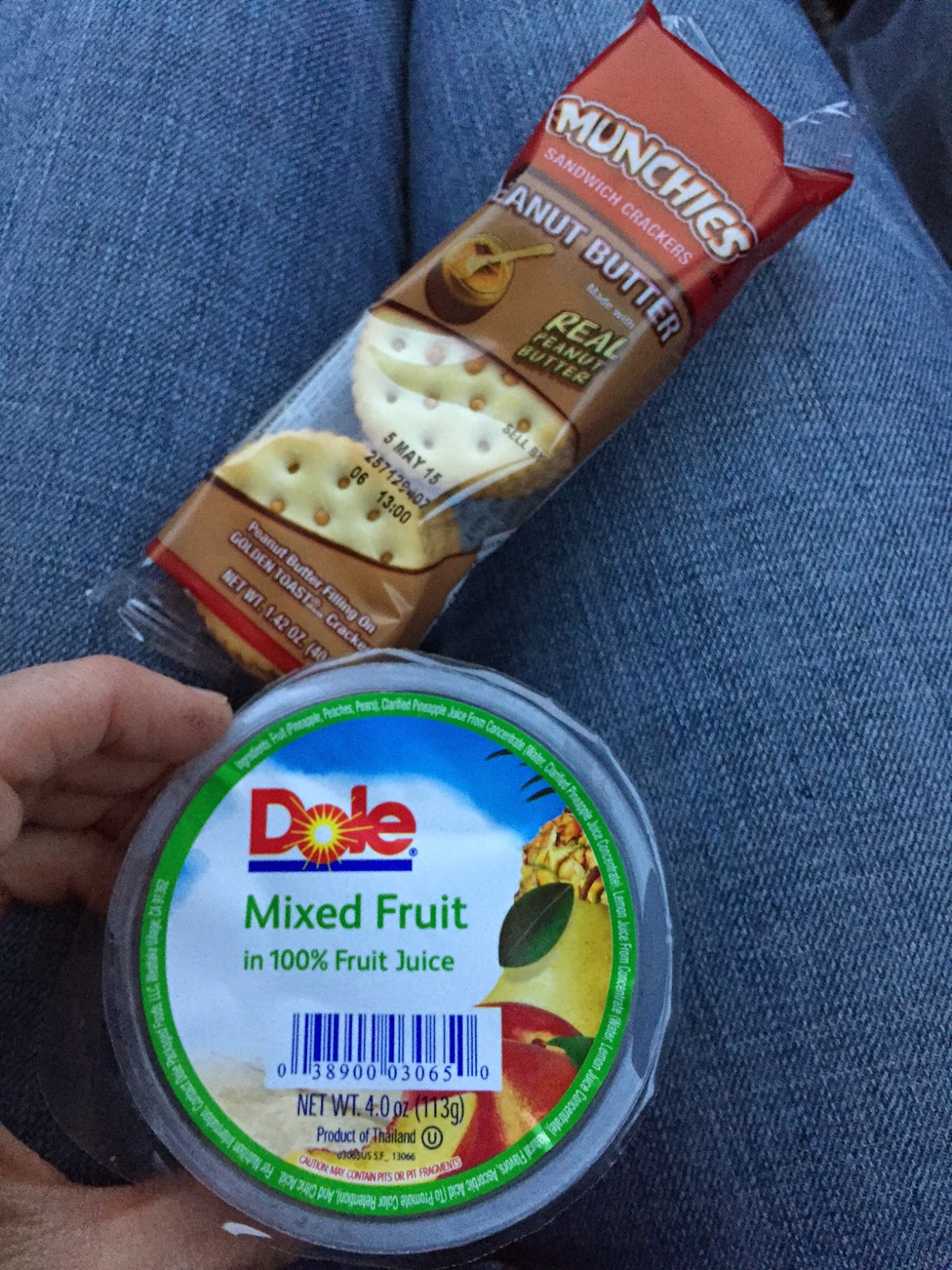 My real post-race treat came at dinner time! I knew months in advance that I'd order Imagine Vegan Cafe's Vegan Chicken and Waffles after the race. And I did! 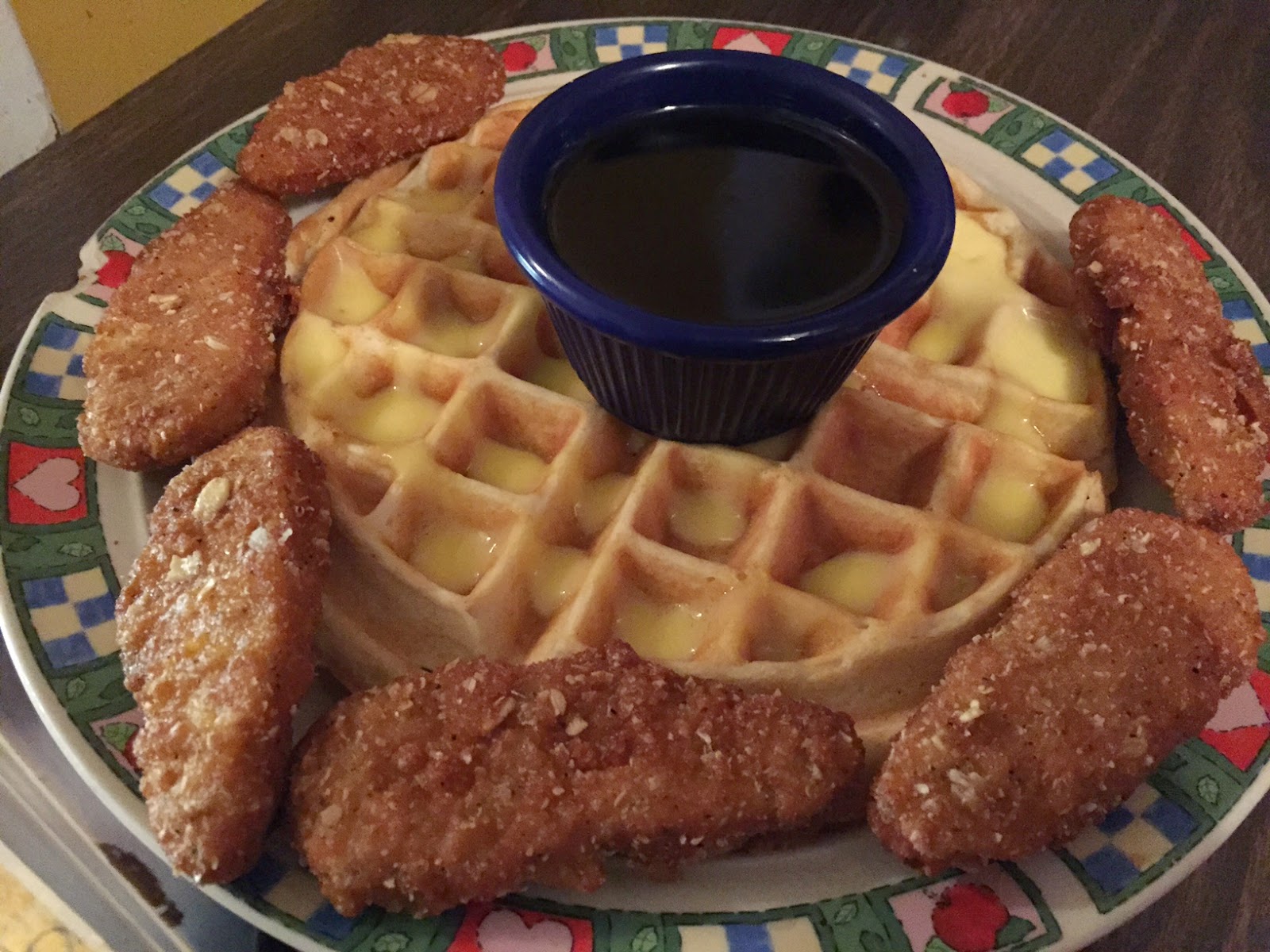 And it was damn delicious. I don't order this often because it's so decadent. But I earned it. For good measure though, I did request a side of Garlic Kale. 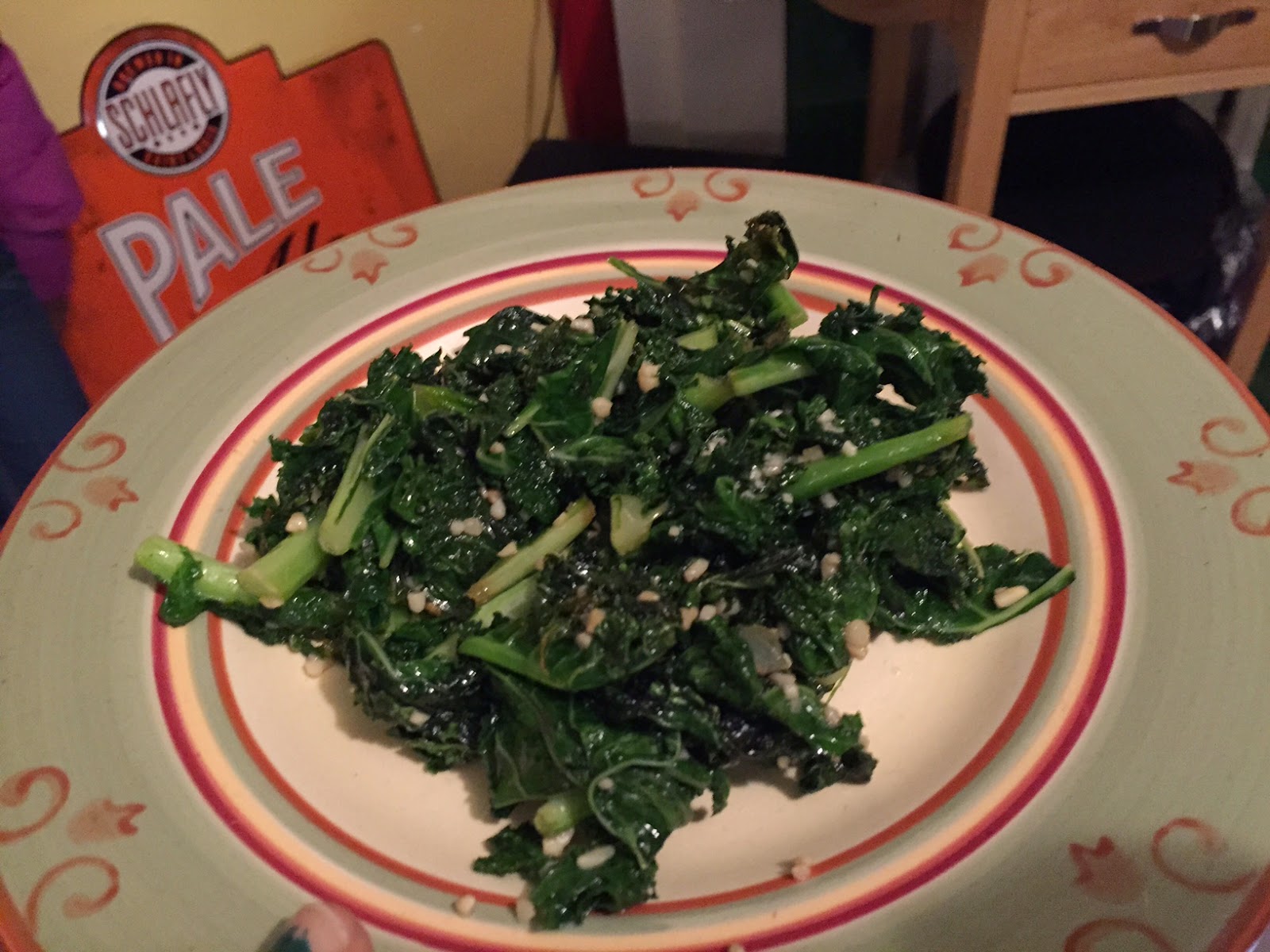 Of course, I had to get another post-race beer — Big Pants Brewery's Chocolate Oatmeal Porter. This is my favorite beer of the season. 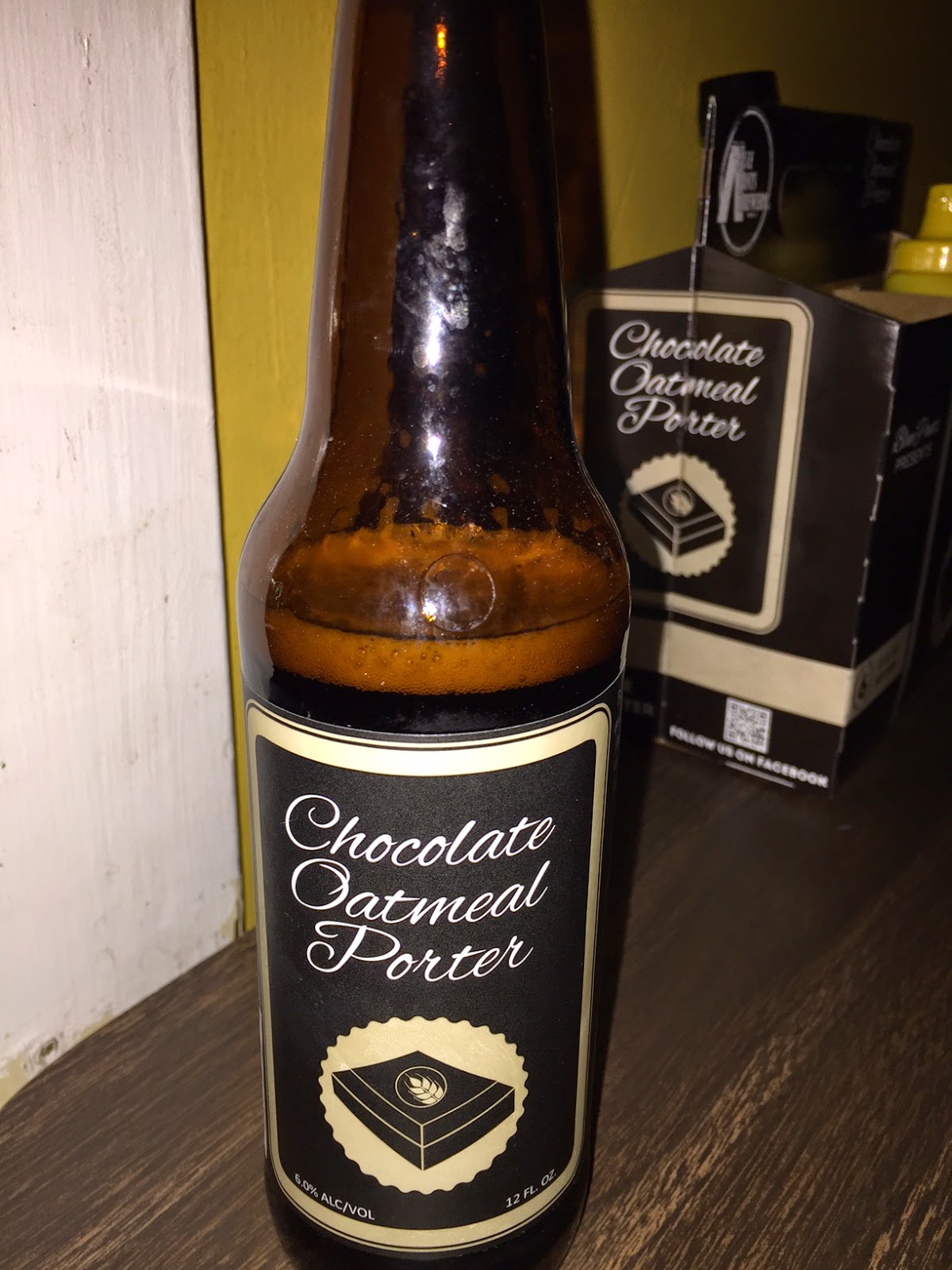 Typically, I think that meal would have made me miserably full. But after dinner, I felt just right. I burned about 1,000 calories in the race, according to my FitBit, so I needed that.

I'd planned to go out to a trivia night on Saturday night, but by 8 p.m.-ish, I was beat. All I wanted to do was sit around and rest my weary legs. So we rented Maleficent, and I made some Quinn Olive Oil & Herbs Microwave Popcorn. Love this stuff! It's plain popcorn in an eco-friendly bag, and after it pops, you mix in a packet of olive oil and a packet of noochy herbs. I guess I did my carb-loading after the race! Whoops! Sorry not sorry. 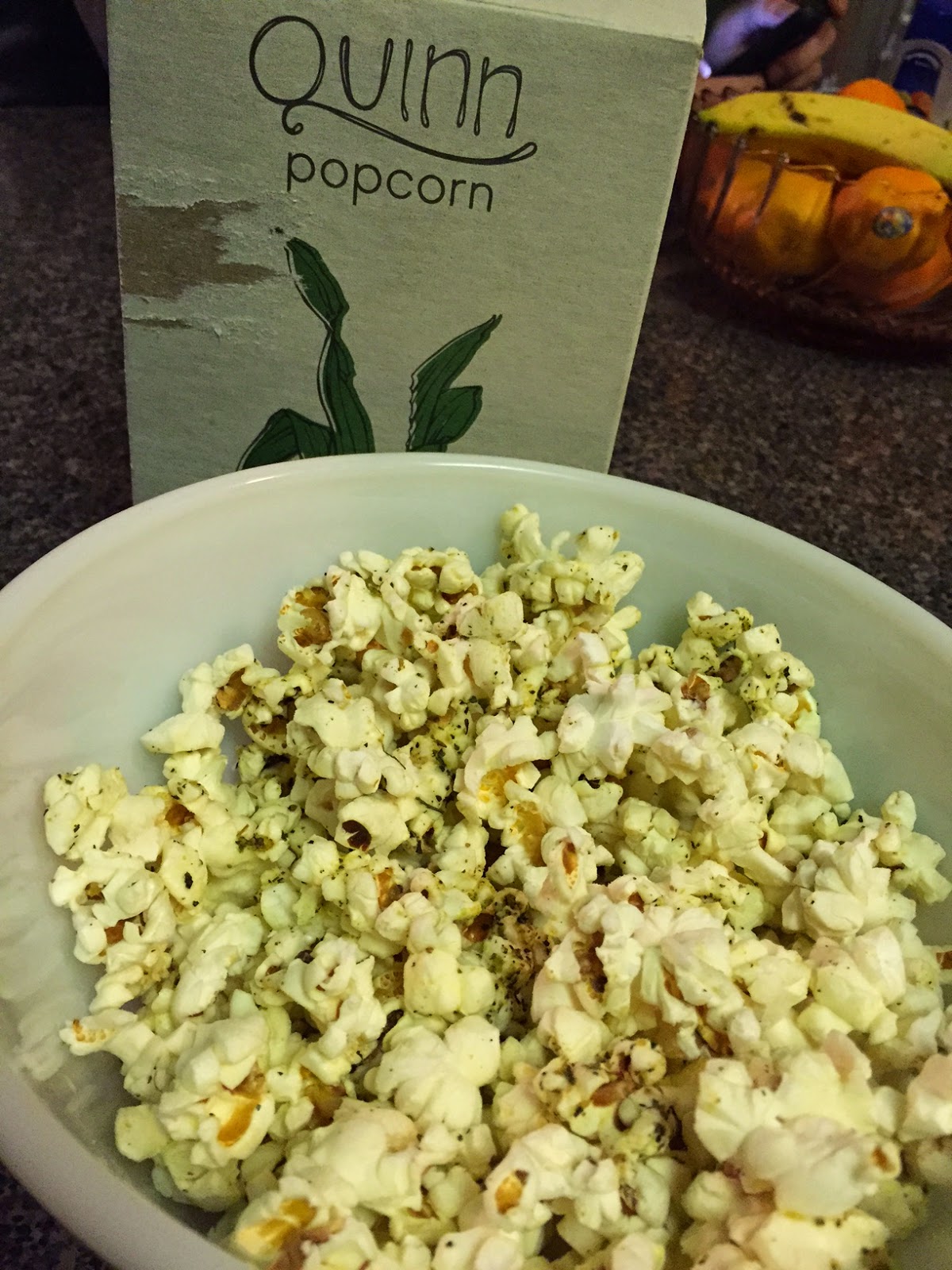 So there you have it! Race day fun! Now I'm rewarding myself by taking this whole week off of running or cross-training. I'll do some yoga here and there, but mostly, I'll be sleeping in and chillin'.  No early morning workouts this week!
Posted by Bianca at 9:48 PM

Congrats! I think it's pretty rad that you went for it even after a pretty huge injury set you back - that's guts, lady!

Great job! Congratulations to you and Cassi. Glad you enjoyed it.

You are a million steps ahead of over 50% of the country. Never apologize for how many minutes or hours it took you.Inhale the excitement of it all!

SO awesome, Bianca! You rocked it!

You are amazing! You should be so proud of yourself!

Congrats!! That's really awesome. In the new year I am going to start over with couch to 5k since I've had to take a year off for my broken ankle.

You go grrrrl! You really earned those chick'n and waffles. Congratulations.

Congrats Bianca! What an amazing accomplishment!

Congratulations! I know it has been a long journey with your injury.
Your playlist sounds amazing!

I know how hard of a time you had with that dang injury. You should be SO proud of yourself! I sure am! :)

Love your choice of songs and that post-race chicken and waffles looks AMAZING!!!

Hope you are enjoying your rest!

You are so amazing! So proud of you and Cassi! I've never even run a 5K!

Congratulations! The half marathon is my favorite race. I'm so glad you were finally able to reach your goal.