There are only 12 ladies invited, and new people can only be added when one person drops out. No chocolate chip cookies or peanut-containing cookies are allowed. That last part is because of Cassi's peanut allergy. The chocolate chip rule is just silliness. In year's past, each of us had to bake 13 dozen cookies, and we'd package them by the dozen and swap. The 13th dozen was donated to a charity of Cassi's choice. But every year, we'd all moan and groan about baking 156 cookies. And besides, who wants to go home with that many cookies?!

So Cassi finally relented this year and knocked it down to six cookies per person. Much more reasonable. We met up Saturday night with food, wine, and lots of cookies. The wine was placed in the center of the circle. 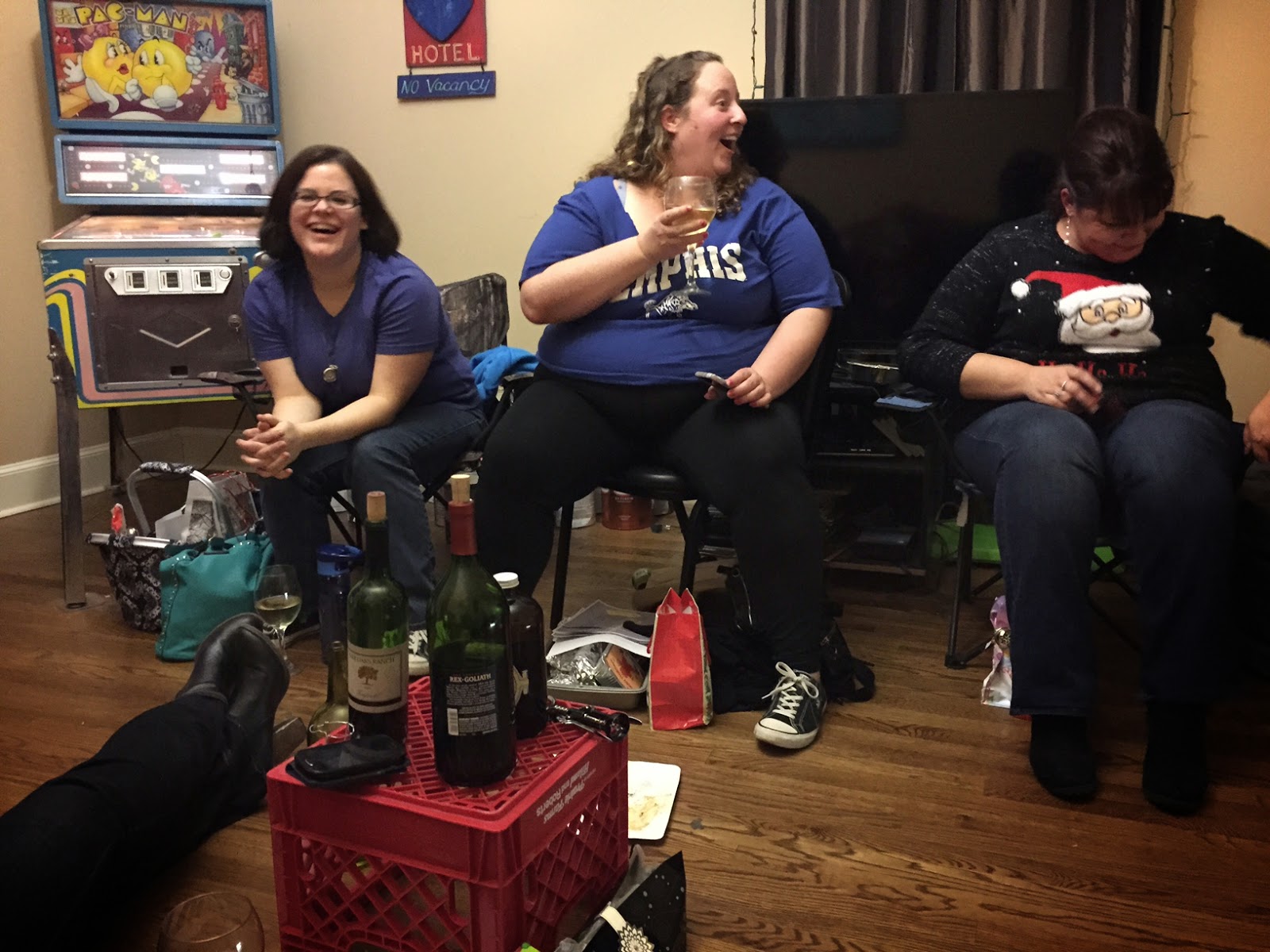 And Nicole walks in dressed like Ms. Sexy Claus. 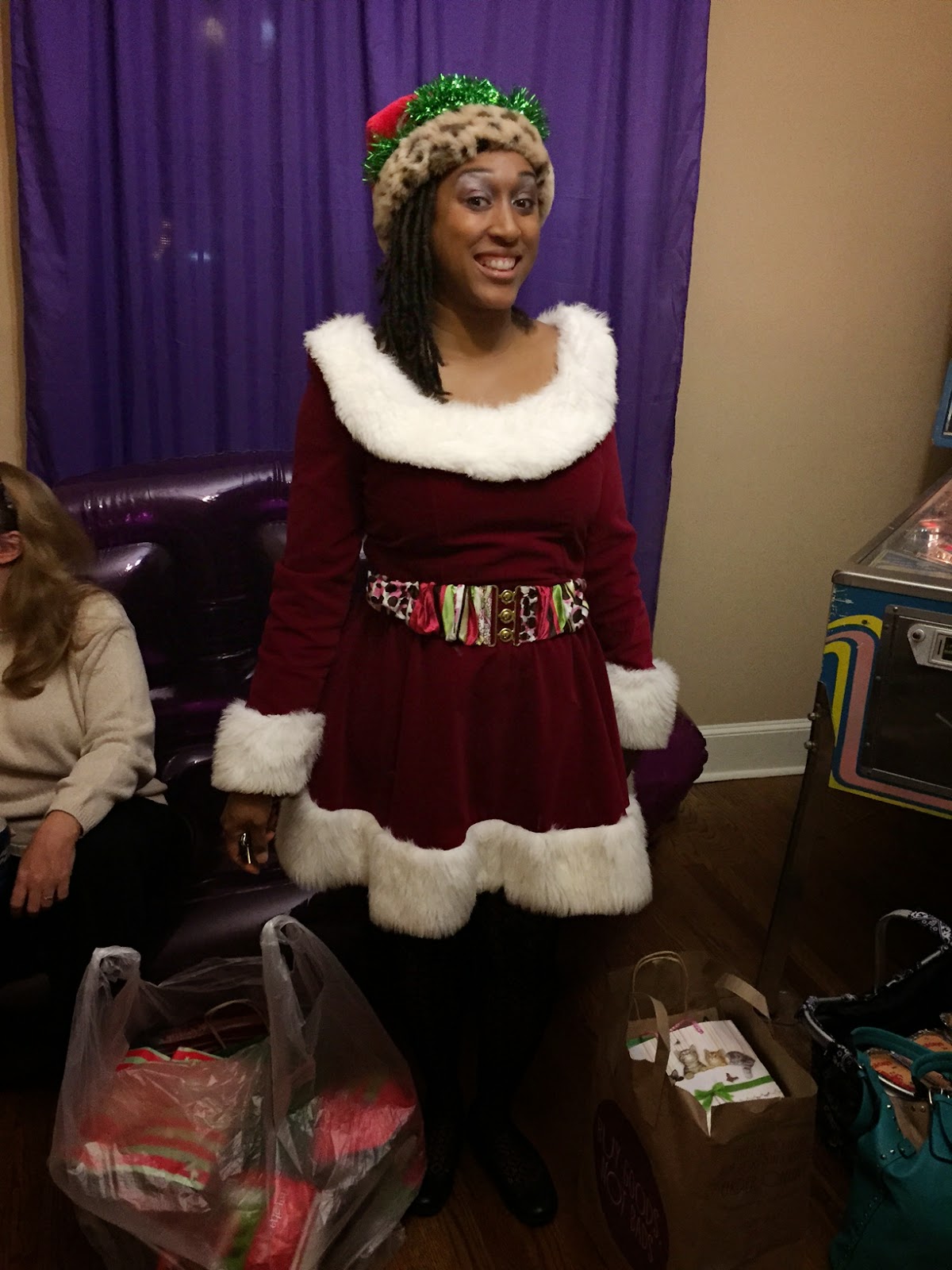 And each person took turns going around the room, talking about our cookies and how they related to our year. Oh yea, that's another rule. The cookies have to somehow tie in to your past year. 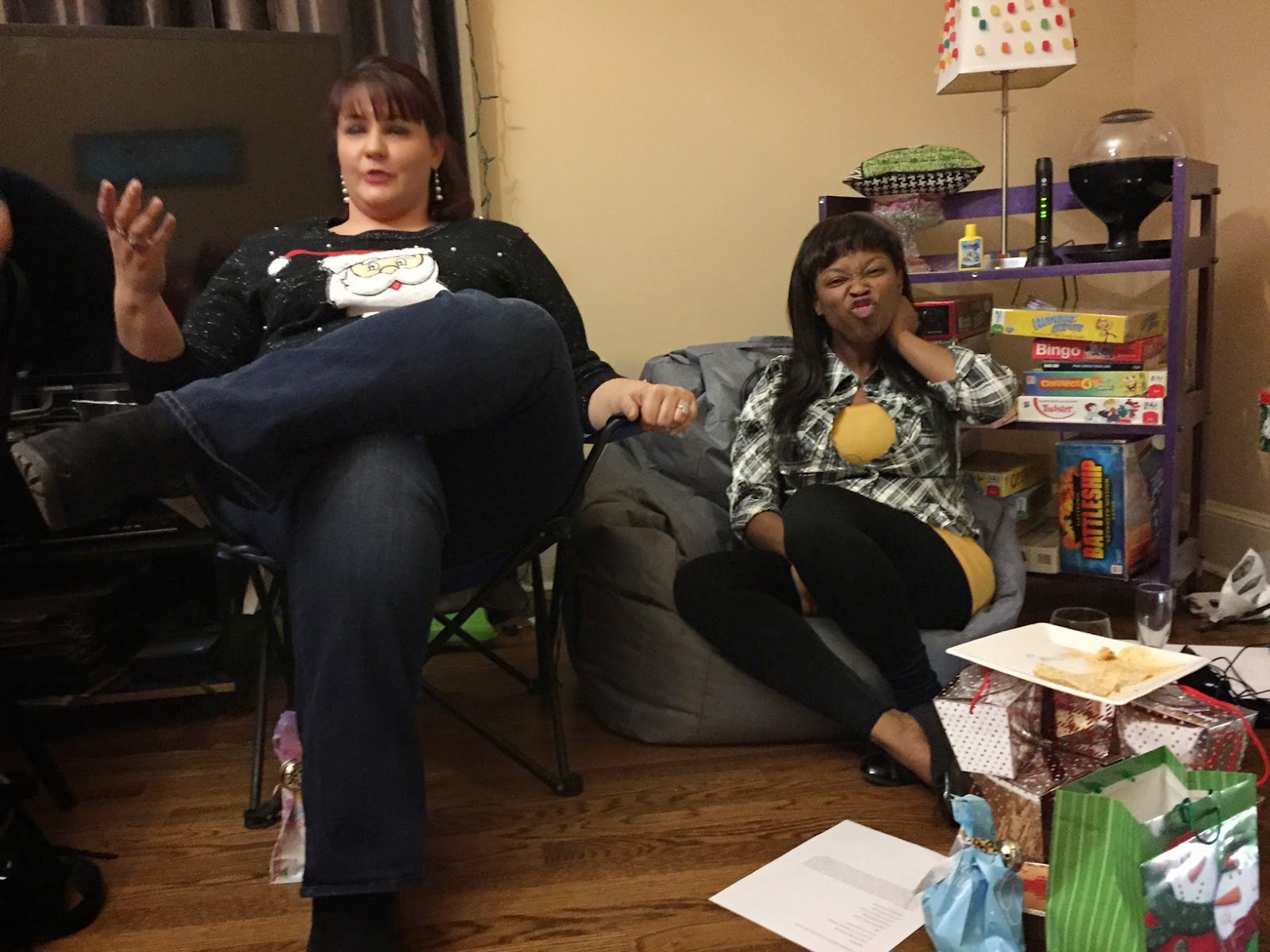 Well, I don't like rules. And since I'm 34 now (and it's my last year to check off that 27-34 age box on surveys), I've decided that if I have to be a grown up, I'm just gonna do what I want. In fact, I've dubbed 2014 the Year of I Do What I Want. I'm not following any traditional life path of having to get married or have kids. I don't care about that stuff. Instead, I'm just doing what I want. Isn't that what being a grown up is all about? I wanted to run a half-marathon in 2014, so I pretty much made my whole year about getting that checked off my list.

So what did I bake? Chocolate Chip Cookies, bitch. Breaking the rules! 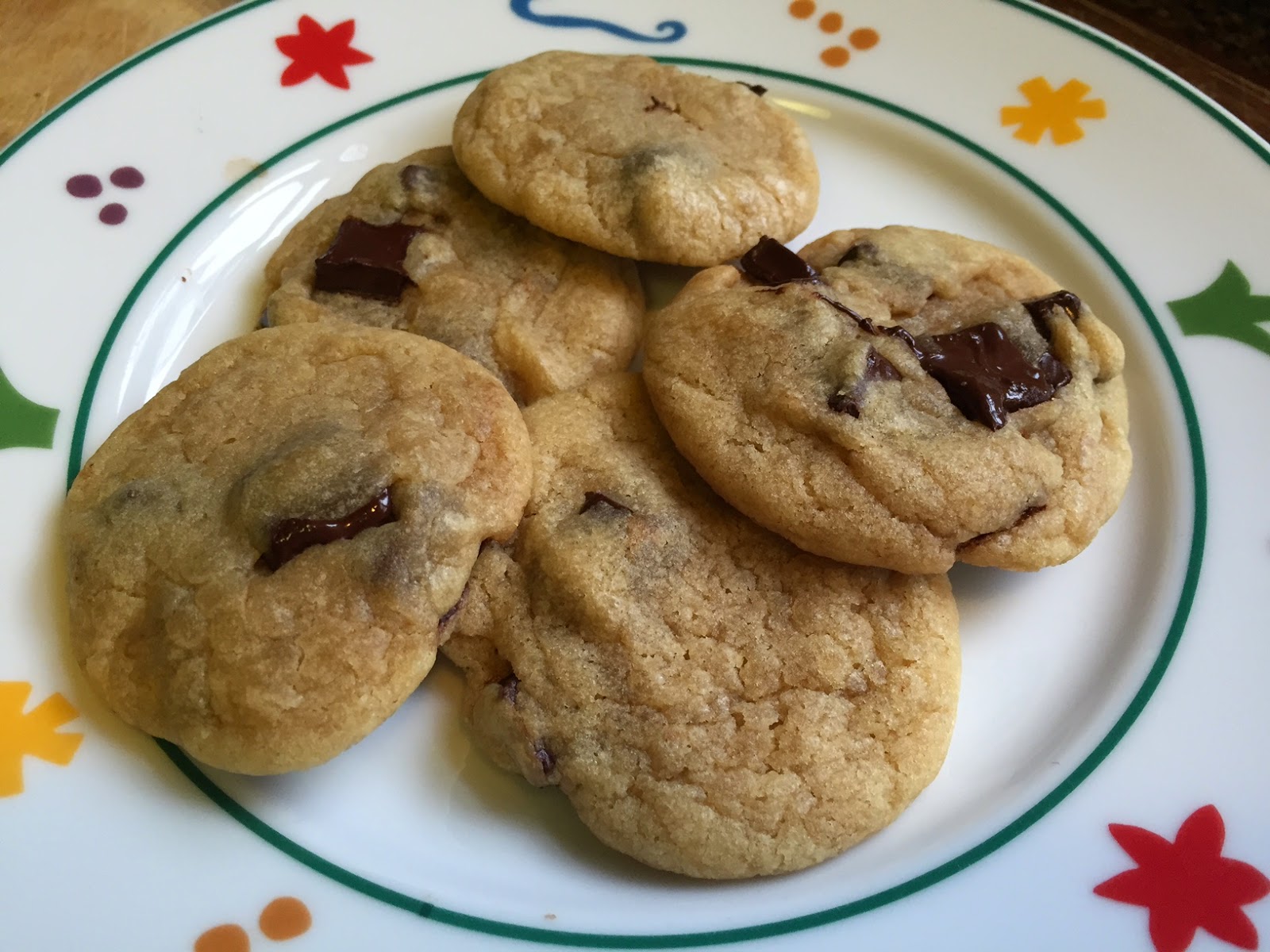 Okay, technically, these were chocolate "chunk" cookies. That was a bit of a loophole in Cassi's rules, so I took advantage of that. I used Isa and Terry's Chocolate Chip Cookie recipe from Vegan Cookies Invade Your Cookie Jar, but you can also find it here on the PPK. 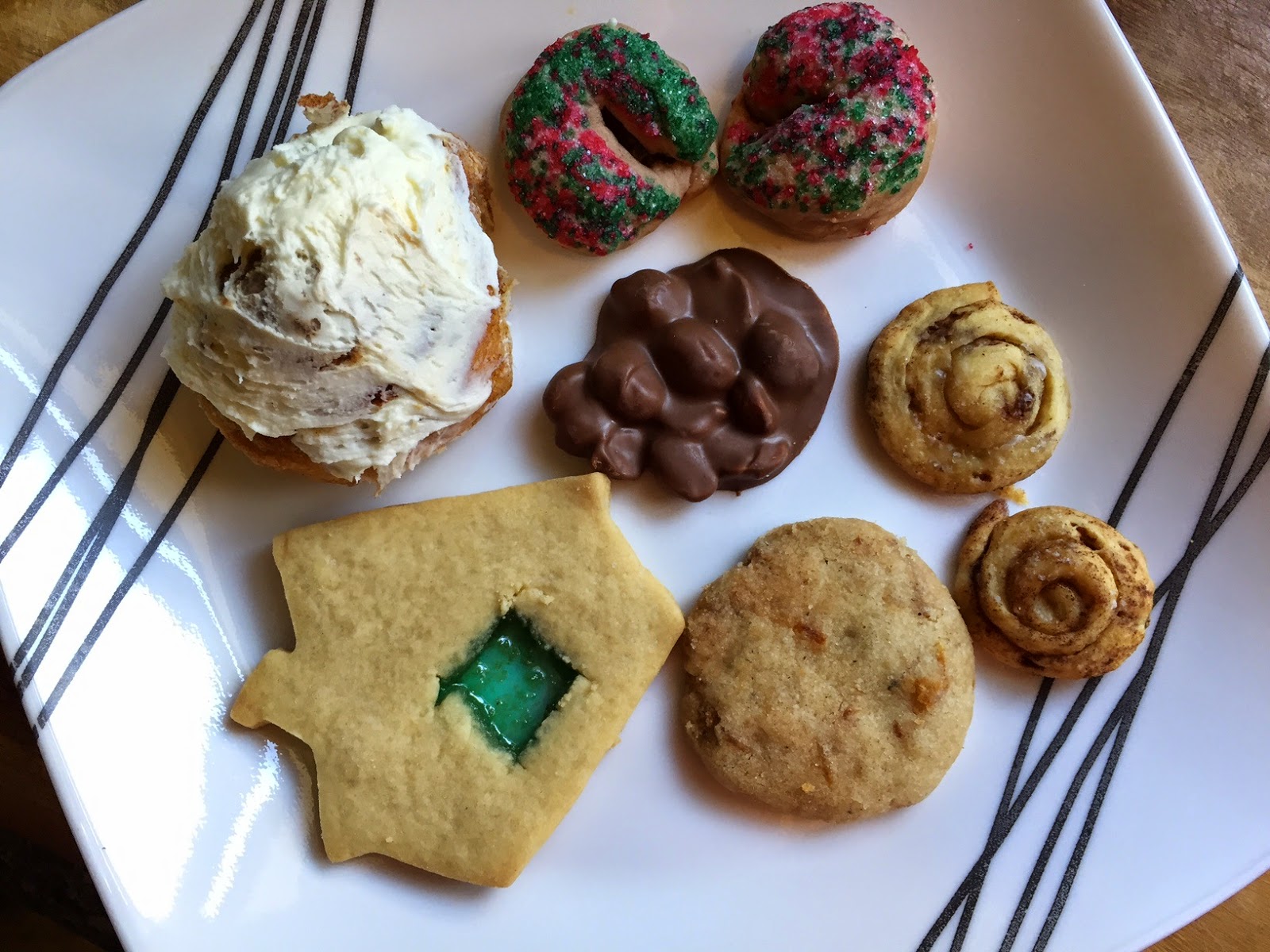 Loved Nicole's buns. She's also a rule-breaker for bringing pastry rather than cookie. Pam's wine cookies were festive and perfect for dunking in a glass of merlot (yes, I did that). Aisha's cinnamon roll cookies were like little bites of Christmas. Karen got totally inventive and combined lemon with fiery black pepper, and you know what? It was a genius combo. Cassi's very Christmas-y stained glass cookies were so pretty, and they have a melted Jolly Rancher baked into the center! And Jennifer's Christmas crack is SO GOOD. It was made with vegan chocolate and peanuts (she's also a rule-breaker), and I'm sad that Cassi can't eat this stuff because it really is like crack.

I forgot to photograph Lisa's Hershey Kiss Cookies because they weren't vegan, so they didn't make it onto my cookie snack lunch today. Yes, I ate leftover cookies for lunch. I do what I want. Most everyone veganized their cookies this year, even though several ladies aren't vegan. How nice, right?! And they all did an excellent job.

Of course, we had to have some savory food too. I brought Somer's Kick Ace Extra Sharp Raw Vegan Holiday Cheddar Cheese Ball, which has been basically taking over the vegan internet lately. And it's no wonder because it is FREAKIN' AMAZING. This is a quick cashew cheese that doesn't involve any aging, so you can make it on the same day you plan to serve it. It gets its orange hue from sundried tomatoes, and it has a silky yet solid texture from the coconut oil. This was a total hit for the vegans AND the nonvegans! 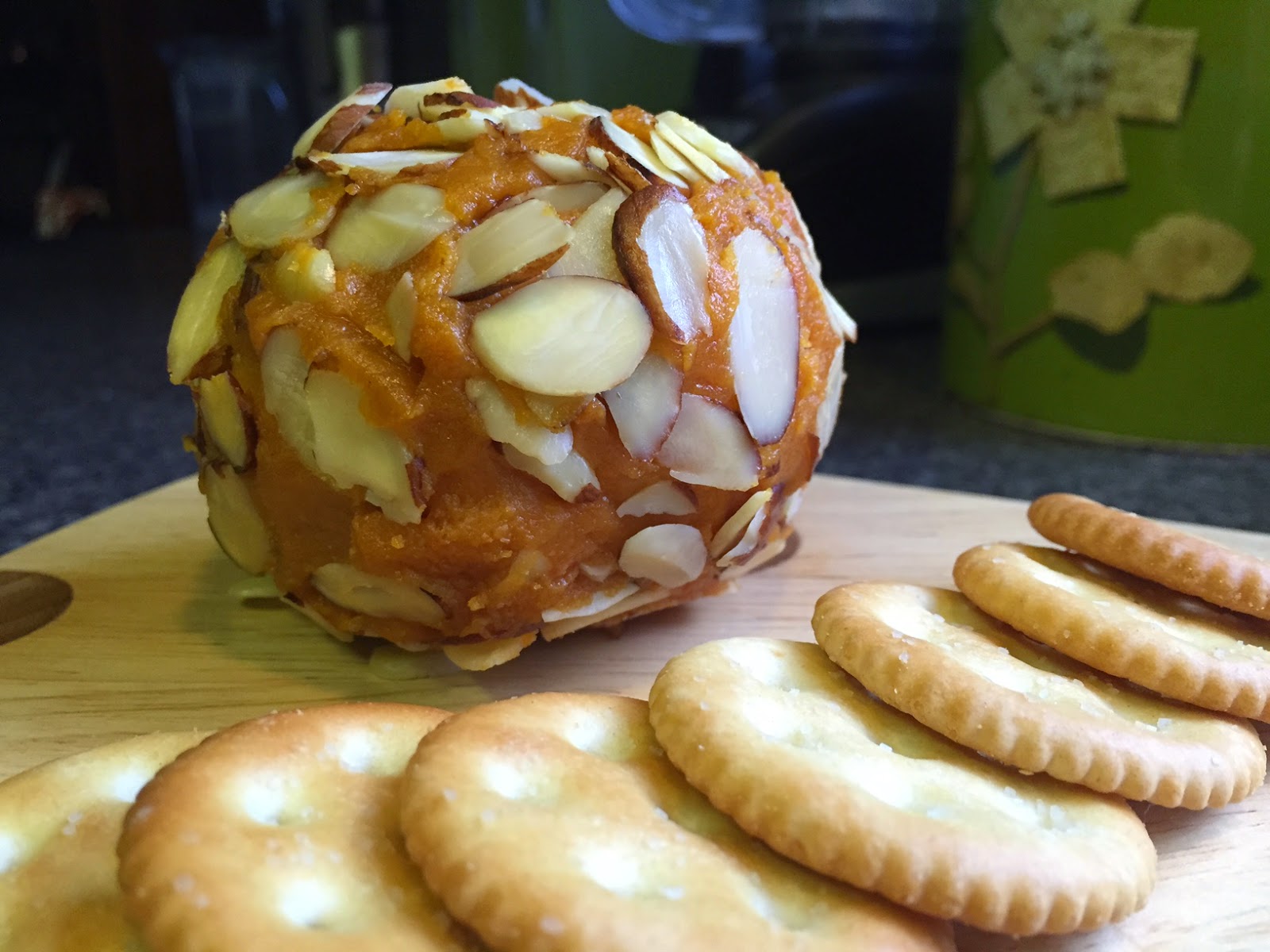 Cassi made some fire Buffalo Mock Chicken Ranch Dip. I couldn't stay out of this. It's from her cookbook, which hasn't been published yet, but I have faith it'll happen. It was creamy and ranchy and loaded with bites of vegan chicken. 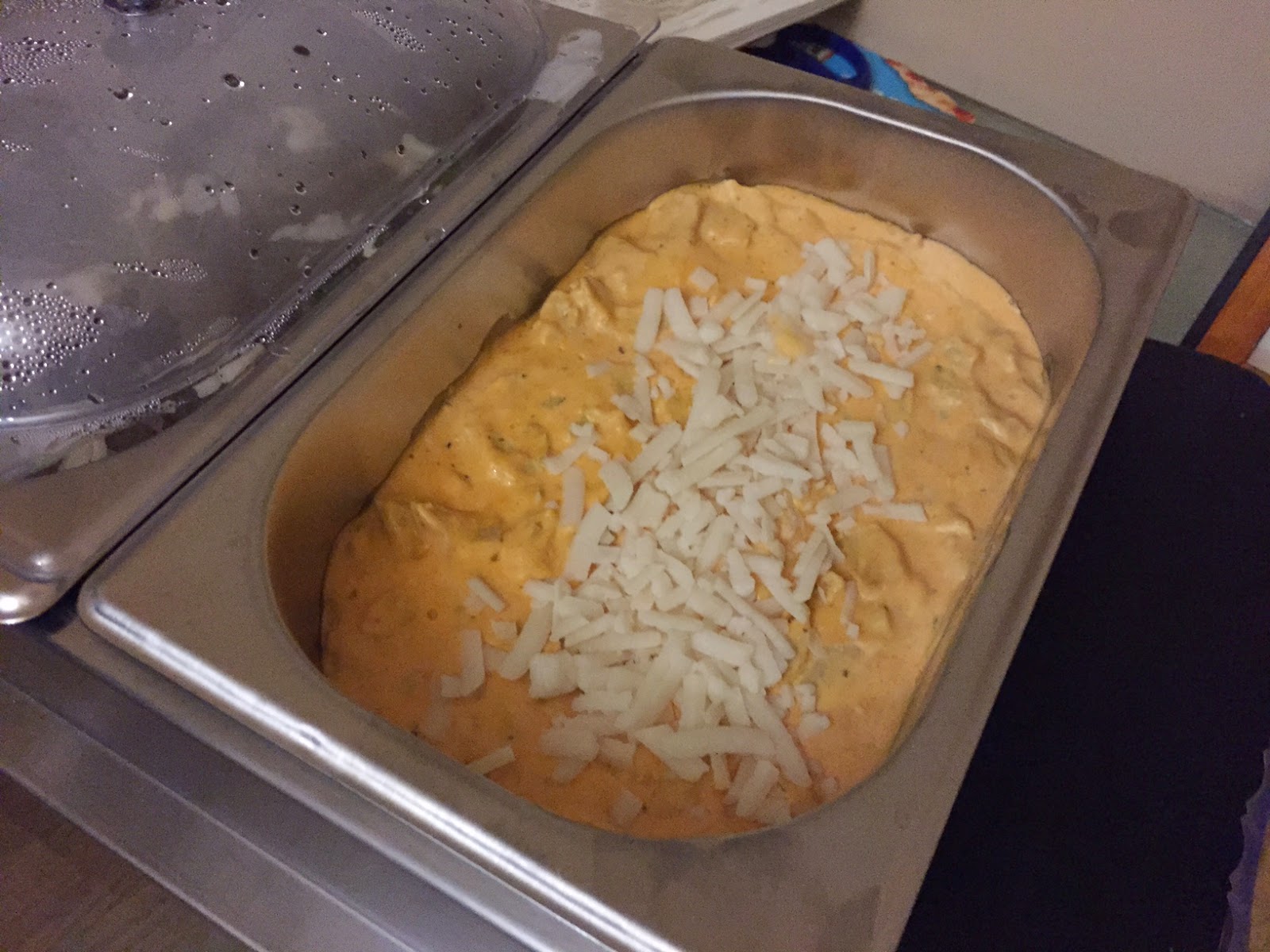 And she made some Pesto Stuffed Mushrooms that were really tasty. 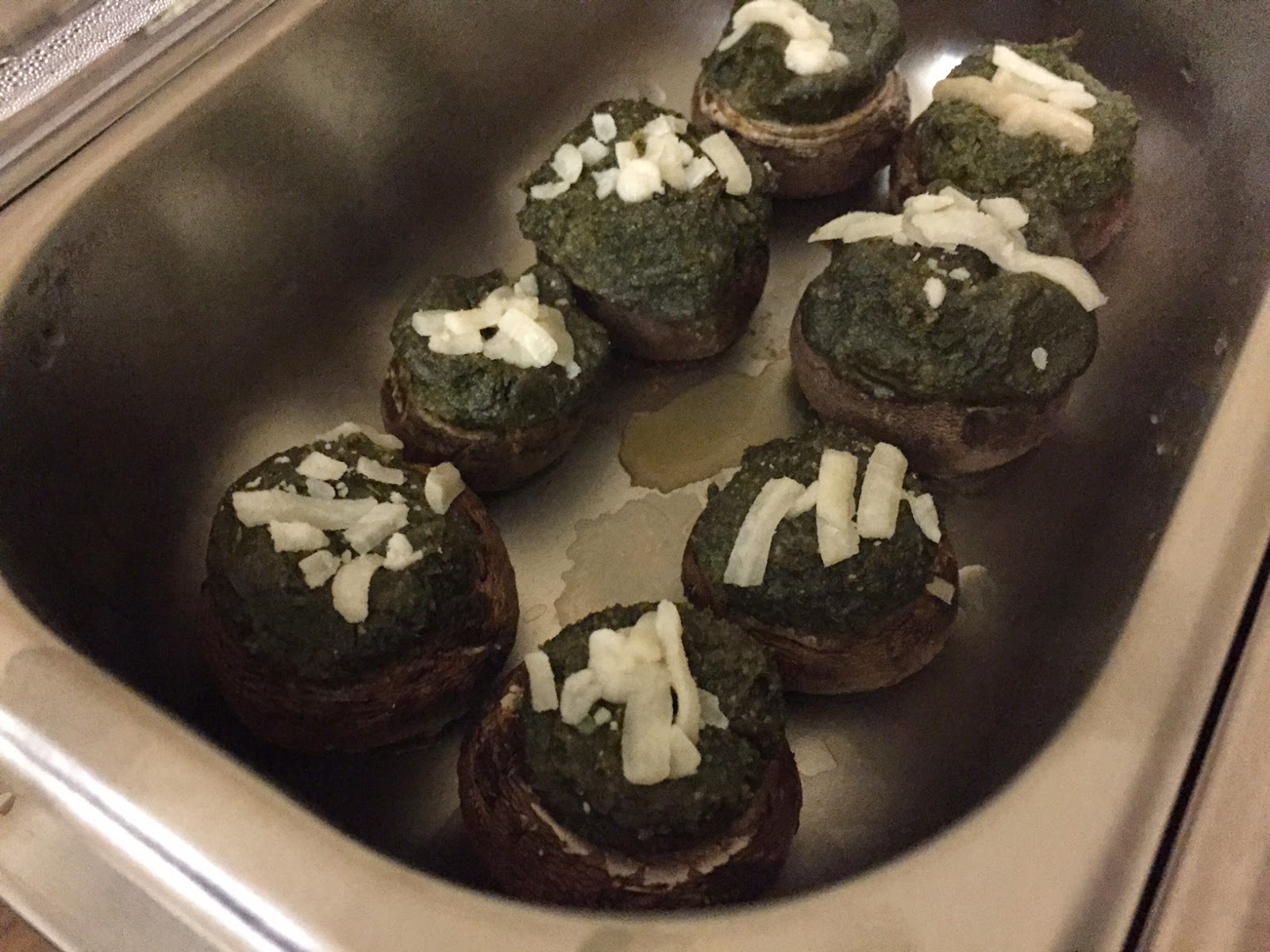 There was also Chocolate Hummus and Cranberry-Orange Hummus. 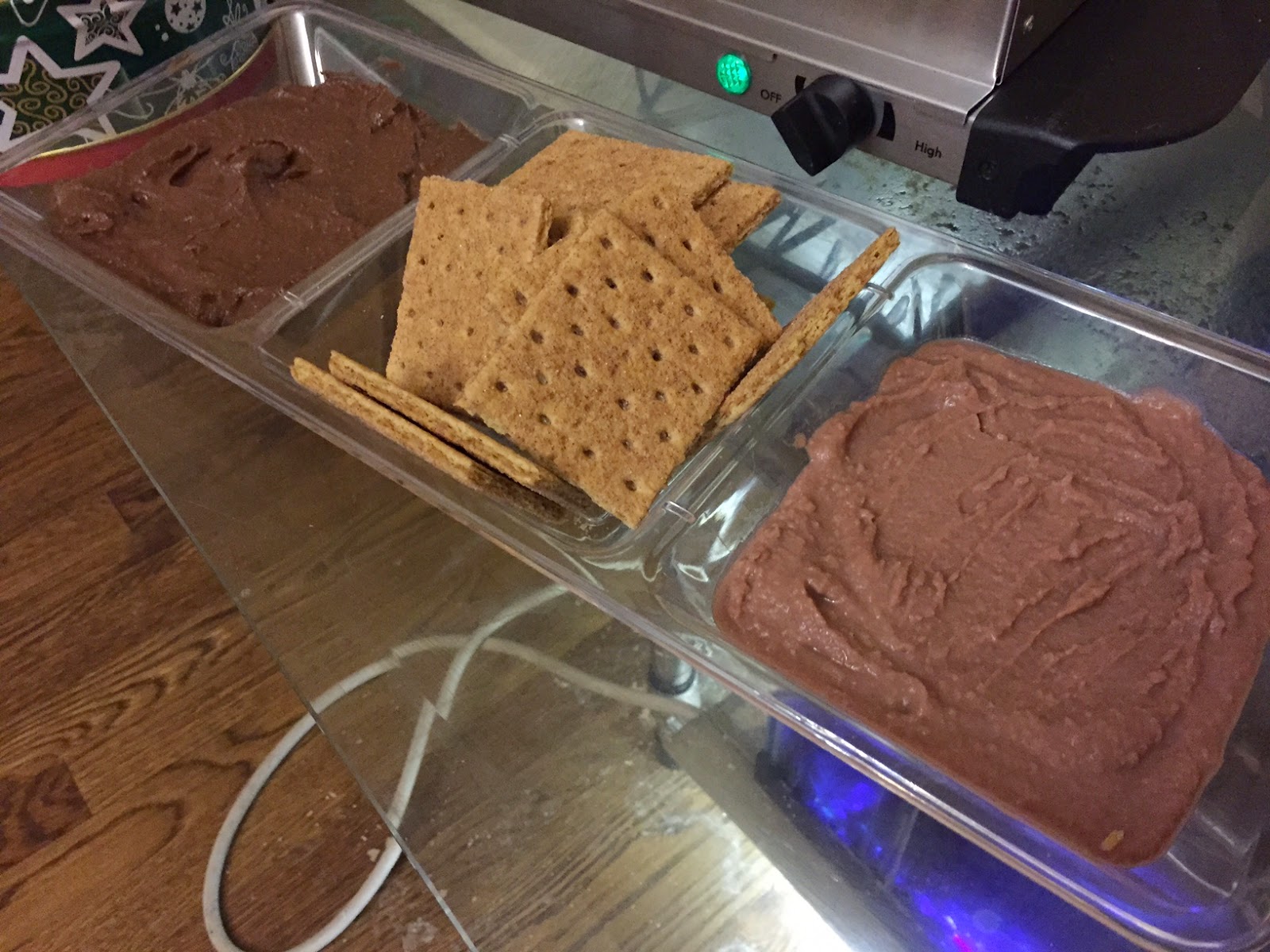 And a big ole bowl of Kettle Sriracha Popcorn. 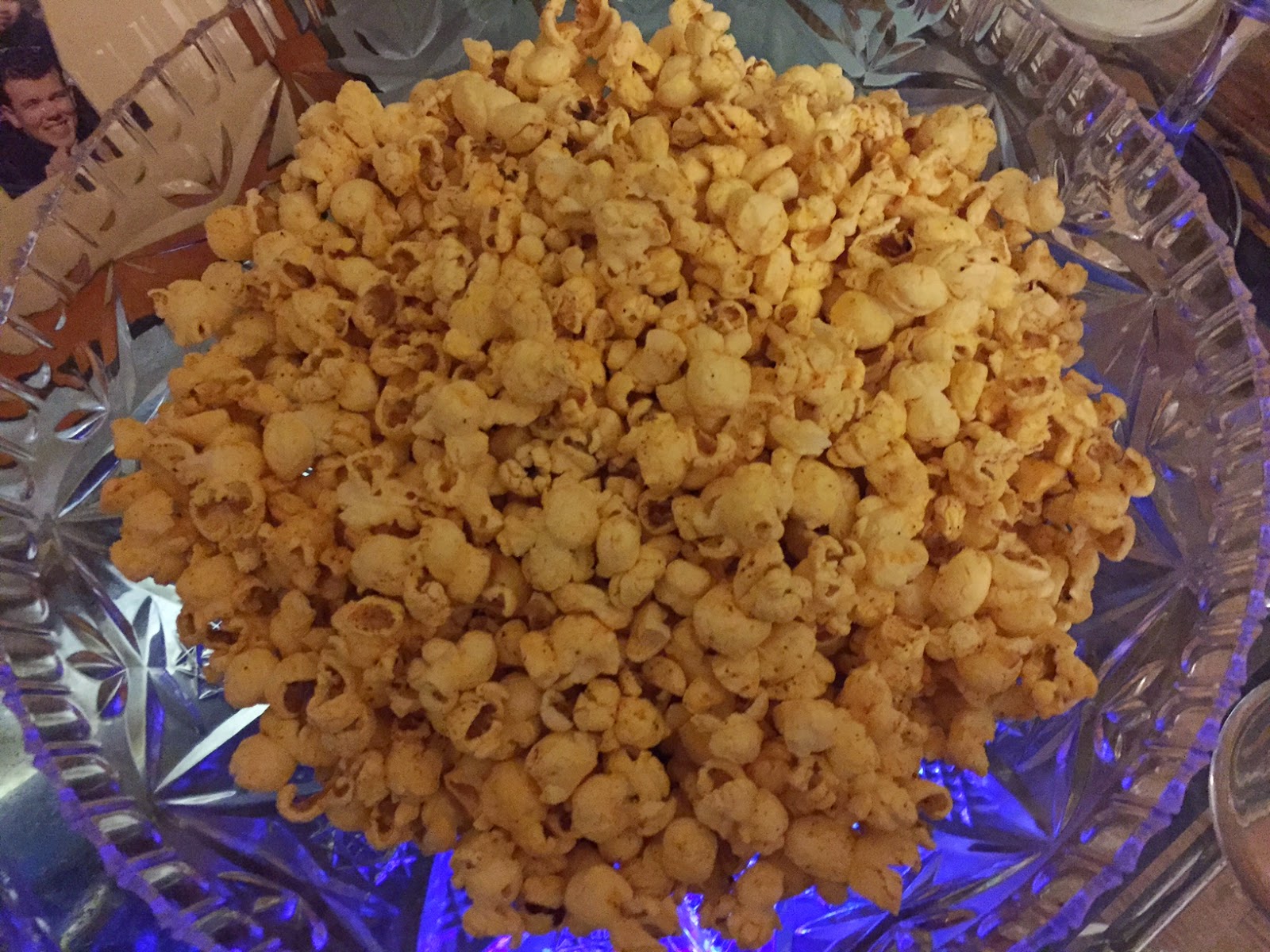 And as if we didn't have enough sweets, Cassi also baked these Almond Butter Cup Banana Cupcakes for Jennifer's birthday, which is coming up. When you bite into these, there's a homemade almond butter cup in the center! These were really, really good. 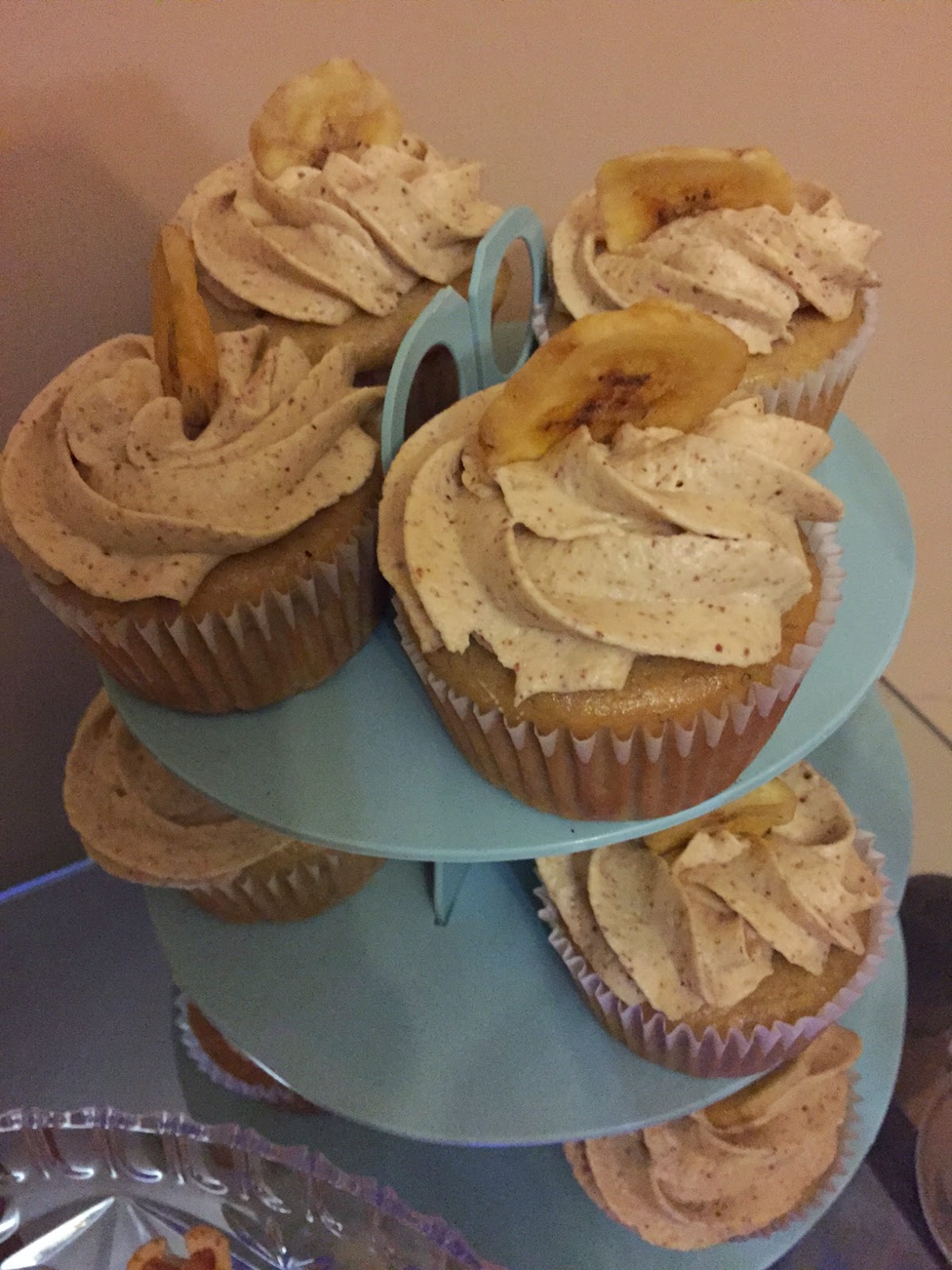 So that's it for Christmas Cookie Club 2014. Even though I bent the rules a bit, Cassi didn't kick me out (yet!), so looks like I'm down to bake another 66 cookies next year. Now I'm off to eat more cookies before I go to bed.
Posted by Bianca at 10:59 PM

Look at that spread!!

I've seen those vegan cheese balls and I REALLY want to try making one!! How nice of your friends to "veganize" so many dishes!! I love that. I always find parties had because no one really cares what you eat/don't eat so there's usually not much to choose from!

I DO WHAT I WANT!!! Love it. Excellent motto for the coming year. And look at all of those awesome cookies!! Yay!

Hah, love your motto for the year! That should be the motto every year! I'm usually a rule breaker, too. I mean, life's too short for so many rules! ;) P.S. Got your cookbook Saturday and I sat on the couch for a good hour reading every recipe, and trying to decide which to make first! =)

I love this tradition! It looks like such a fun get together and you ladies baked some beautiful cookies! I loved your theme for your year and the chocolate chunk cookies look phenomenal. Such a fun post!

Yes! Love that you love the cheeseball, and breaking the rules!

This is such a great idea.
And go you rule breaker! To be honest, I would be a little sad if there wasn't at least one chocolate chip/chunk cookie. Classic for a reason!

Such a great idea! I love the idea of a cookie swap ad you reminded me how fun making sailed glass biscuits is, I haven't made them for years.