Tofutti recently asked me to develop a few recipes using their products, and since I've long been a fan of their vegan "dairy" products, of course I agreed. In fact, Tofutti has been there for me throughout my 10 years as a vegan. Sure, fantastic new products come out all the time, but Tofutti is a standard. It was there when I went vegan, and it's still around now. Their Better Than Cream Cheese, Better Than Sour Cream, and Tofutti Cuties never fail me. Plus, if you can find them in your area, Tofutti makes the best college dorm-style microwave pizza. Oh, and their vegan cheese slices are still kick-ass.

Since I already had a tub of Better Than Sour Cream in my fridge, I decided to try something I've been wanting to recreate for months. During a Memphis beer garden event this summer, I picked up a Loaded Avocado dish at the Truck Stop food truck, and it was so good. I'd never thought to top a whole avocado with beans and mushrooms, but why not? That's clever as hell. 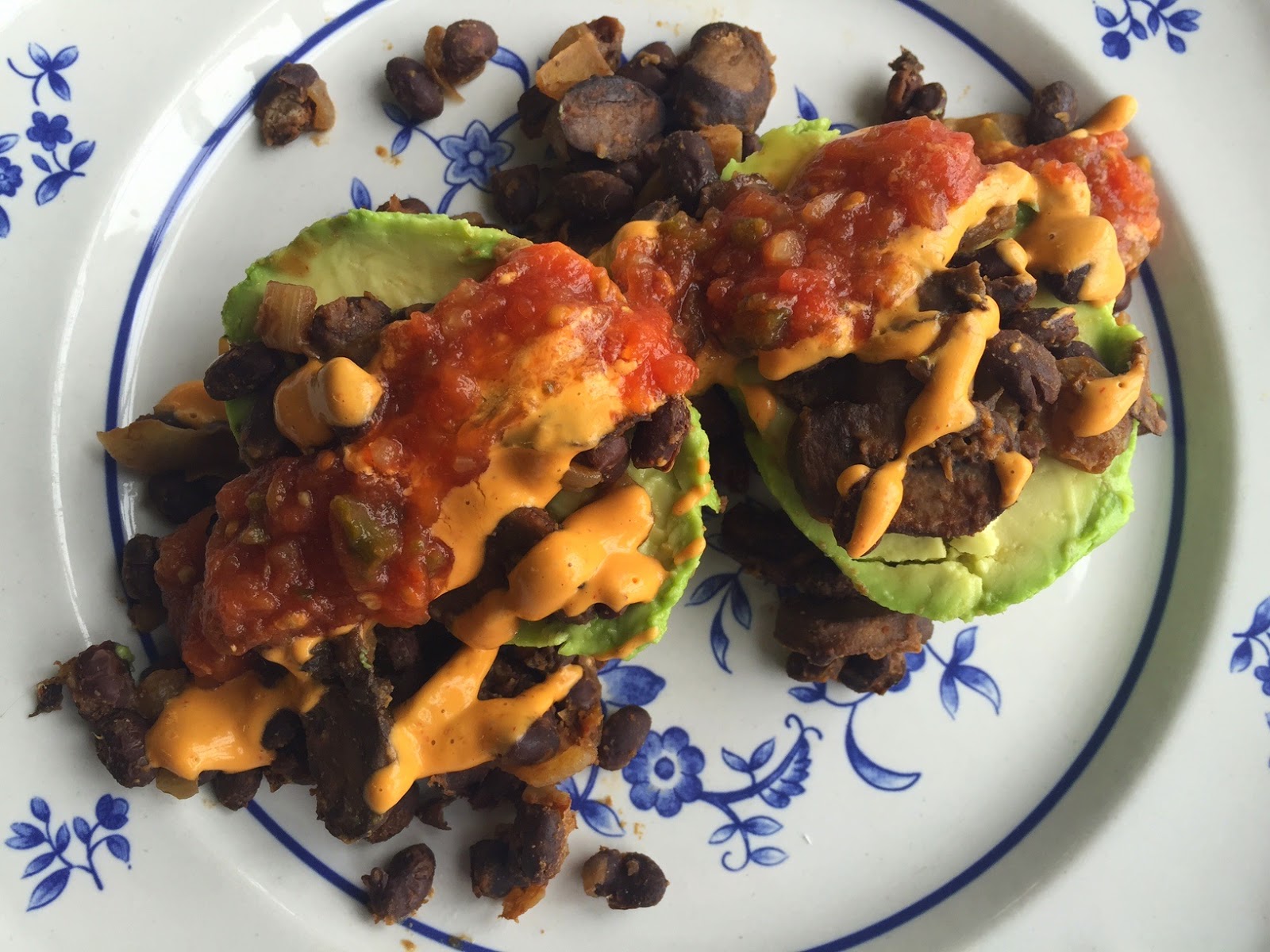 Here's my interpretation made with a whole avocado, black beans, mushrooms, and onions. It's topped with a Tofutti chipotle crema and homemade salsa that my Granny made (but any salsa will do!).

Split the avocados, remove the pits, and place them rounded-side down on a plate.

Add the black beans, water, nutritional yeast, cumin, garlic powder, salt, and cayenne. Cook for about 5-7 minutes or until heated through and most of the water has been absorbed.

Meanwhile, in a blender, combine the vegan sour cream, peppers, and onion powder. Blend until smooth.

To serve, spoon about a cup of the bean mixture over the avocado halves. Drizzle with chipotle crema and top with salsa.
Posted by Bianca at 10:56 PM

[ Smiles ] Oh Bianca, this is a great vegan recipe.

This is also a nice way for me to put my avocados to good use!

What a fun idea! I'd love this! You named my favorite Tofutti products too. At TJ's they have an onion dip packet that works perfectly in the Tofutti sour cream for chips and dip that really take you back.

To make avocadoes sit evenly on the plate cut off a piece off the bottom the make it sit flat and those slivers can be throwm on top of the avocado or blended in the crema.

I used to eat tofutti cuties waaaay back in the early 00's, before I ever even knew what a vegan was! And I still use their cream cheese and sour cream non-stop :)