A couple weeks back, I blogged about Memphis' newest vegan food truck by the Raw Girls, an adorable couple who create delicious, wholesome, cruelty-free juices and high-raw meals. The truck is new (and you can find out where it will be on their Facebook page). But the Raw Girls — Amy and Hannah Pickle — have been in business with their Memphis raw food delivery service for a few years now.

After I wrote about the new truck, Amy and Hannah surprised me with a "thank you" box of their raw goodies, delivered right to my door on the Sunday before last! The large cardboard box was packed with ready-made salads, raw meals, cooked soups, and even a couple of raw desserts! It's taken me about a week to eat it all, but I wanted to post a review when I finished everything.

First, I tried the Potato Leek Soup (made with coconut milk and topped with roasted corn) and the Wilted Kale Salad with Roasted Root Vegetables and Apple. 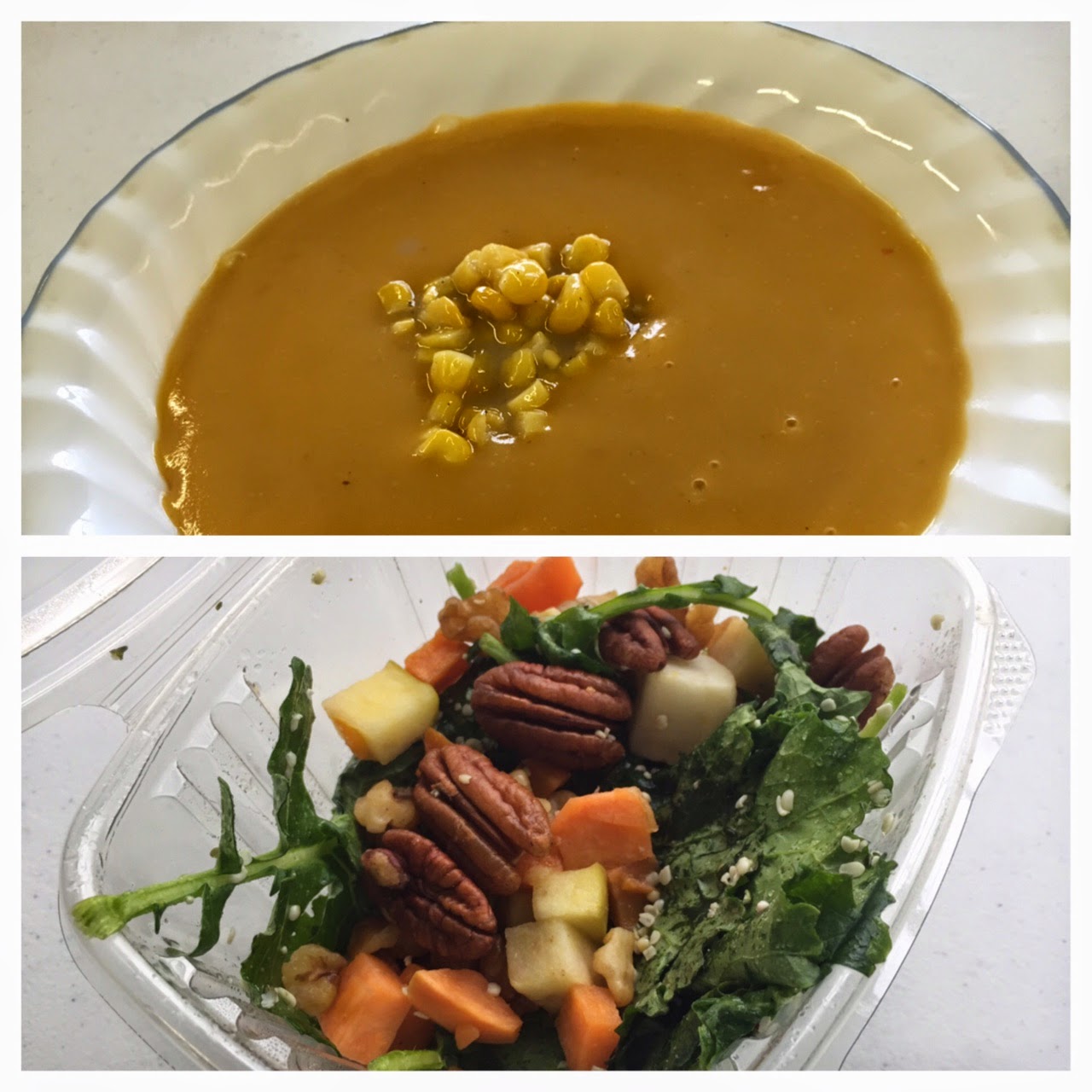 Both were fantastic. I think the potato soup was my favorite of the soups, mostly because I'm a big potato soup fan, and I love anything topped with corn. The wilted kale salad was great. It was made with baby kale (I think), which I'd never had. I liked how it wasn't bitter like some raw kale can be, and I loved the roasted root veggies.

Next, I combined the French Lentil Soup with the Yukon Gold Potato Salad with Radishes and Green Sweet Peas. 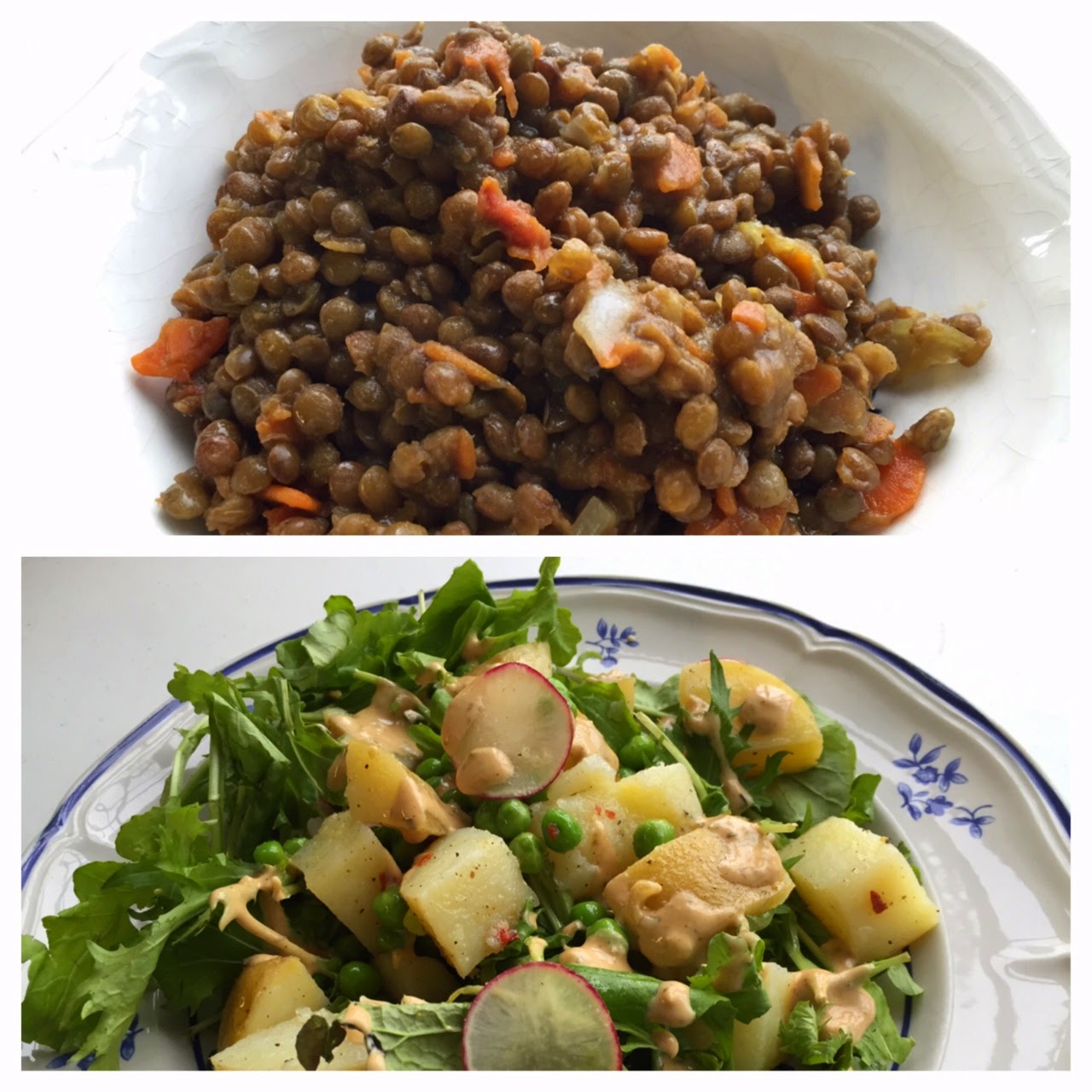 I should clarify that the lentil soup wasn't actually in my box. It's from their food truck, but I had a bit leftover, and it does come in some of their subscription boxes, so I thought it'd be nice to include here. It's about the best lentil soup I've had! Lovely combination of spices. Very warming and hearty. The potato salad was tossed with a creamy dressing that reminded me of Goddess dressing. And the very thinly sliced radishes were just a nice addition. This salad reminded me of springtime.

Then I had the Butternut Squash & Ginger Soup with Vegan Pecan Cream and the Salad of Blistered Grapes, Mixed Greens, Maple-Dijon Vinaigrette, and Shaved Almonds. 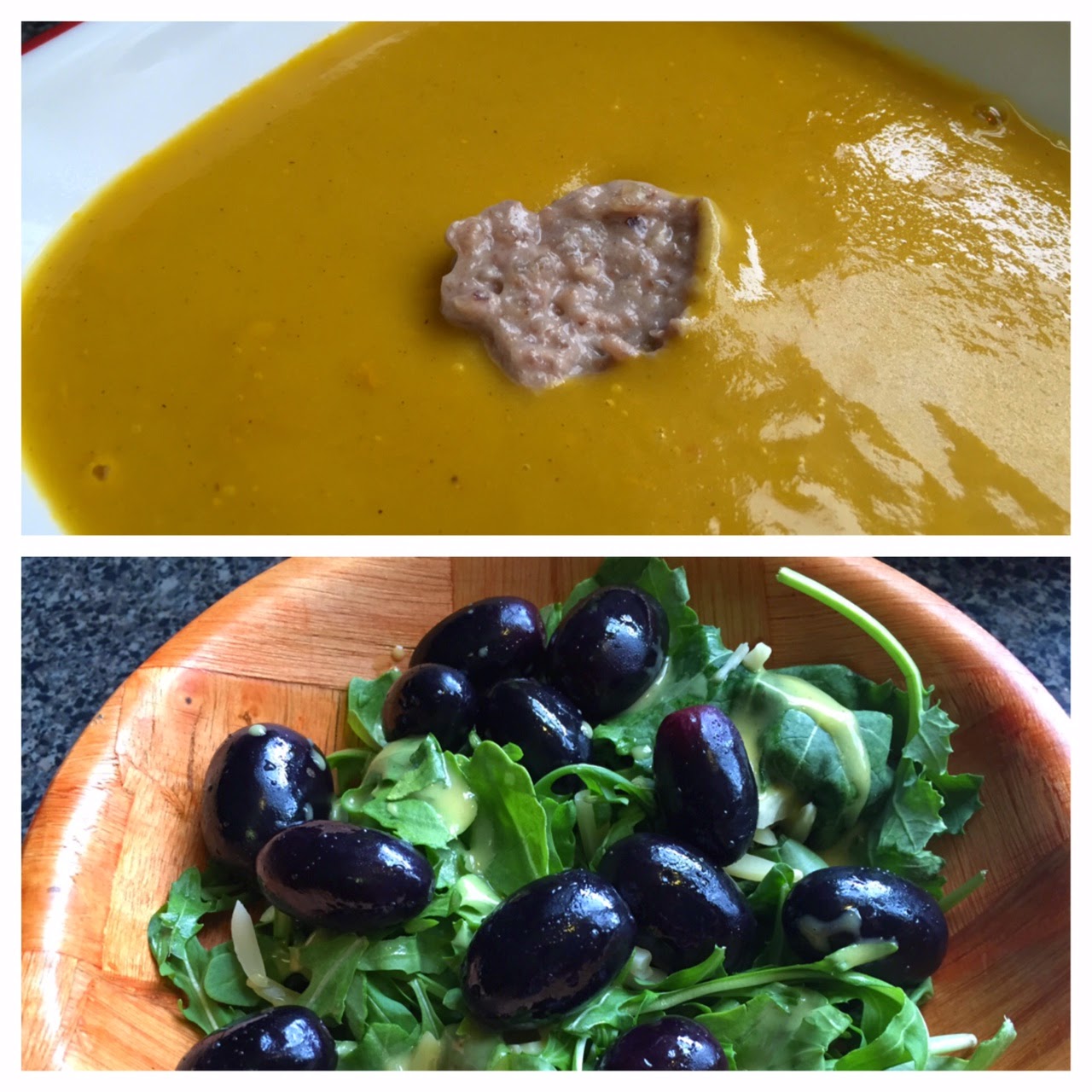 Soup was great. Just the right amount of ginger. And OMG, that pecan cream!!! I could have just eaten that by itself by the bowlful. So decadent. As for the salad, I have to say that I'd never heard of "blistered grapes." Had to Google. Turns out that means roasted! Roasted grapes were new to me, but it really brought out their natural sweetness, and that offered a nice balance with the tangy dressing. Fantastic. 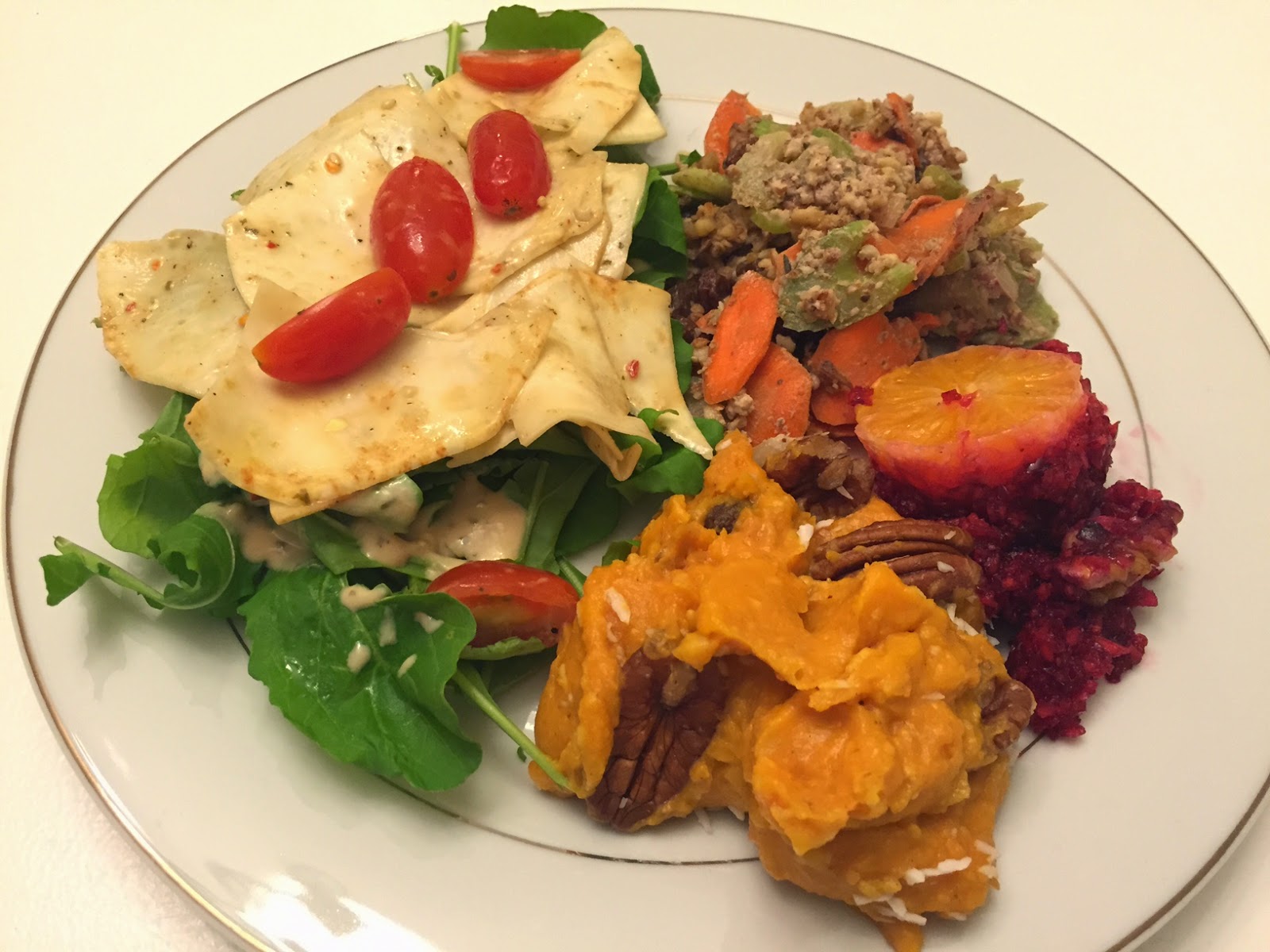 This was a bunch of their holiday-esque meals that were included in the box. Just perfect for toting along to Nashville for Paul's family Christmas dinner. My fave on this plate was the raw stuffing. All nutty and oniony and celery-filled. It really tasted like cooked stuffing but so much healthier!

I also toted this Breakfast Quinoa along with me to Nashville since I was spending the night on Christmas night. I had this for breakfast at Paul's mom's house on Friday morning after a 3-mile run through her neighborhood. I always forget that quinoa can be a nice, sweet breakfast, but this was just awesome — roasted sweet potato, apple, maple syrup, and almonds. Yum! 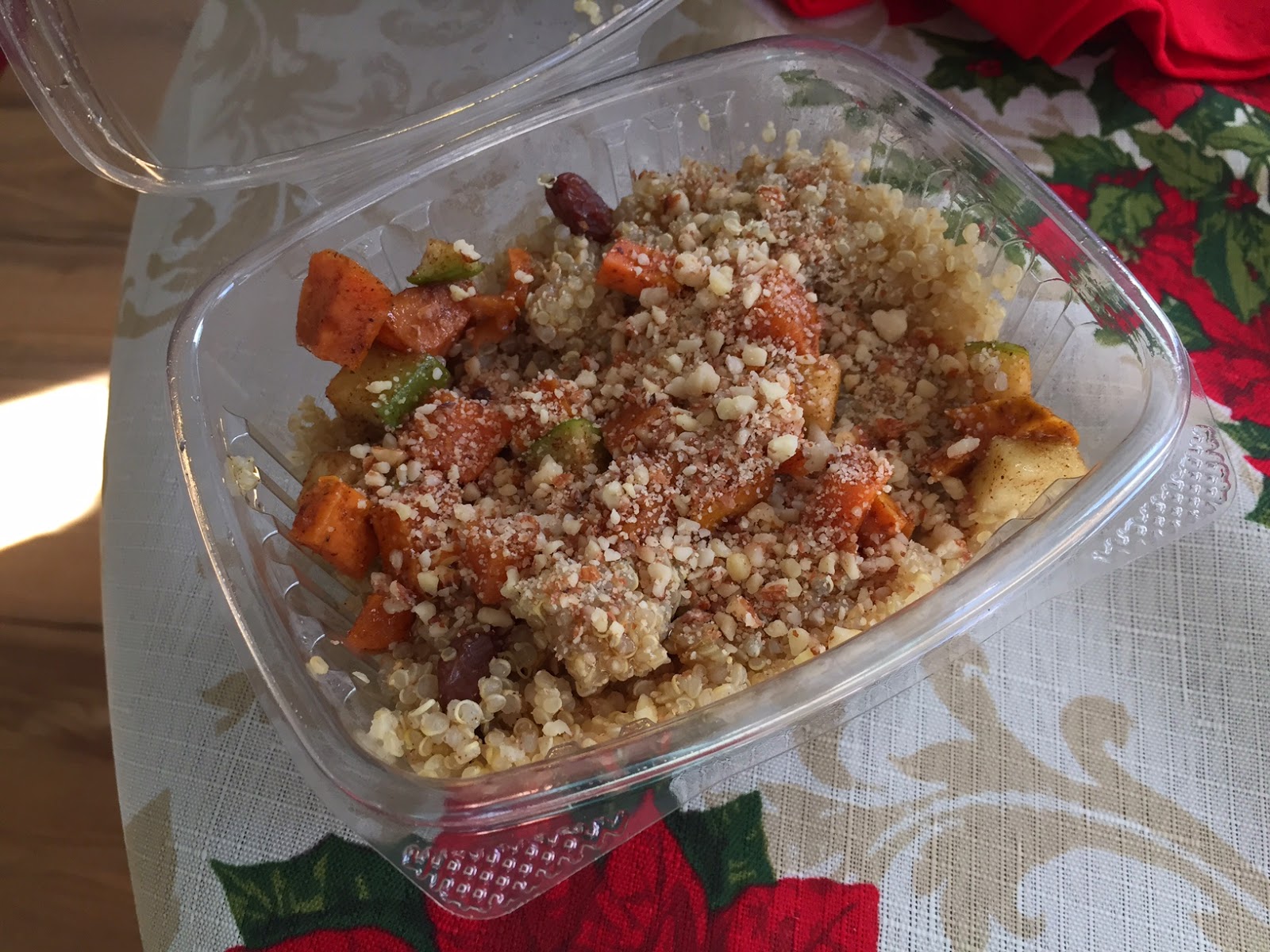 Now for dessert! They gave me a Raw Chocolate & Almond Butter Ganache. 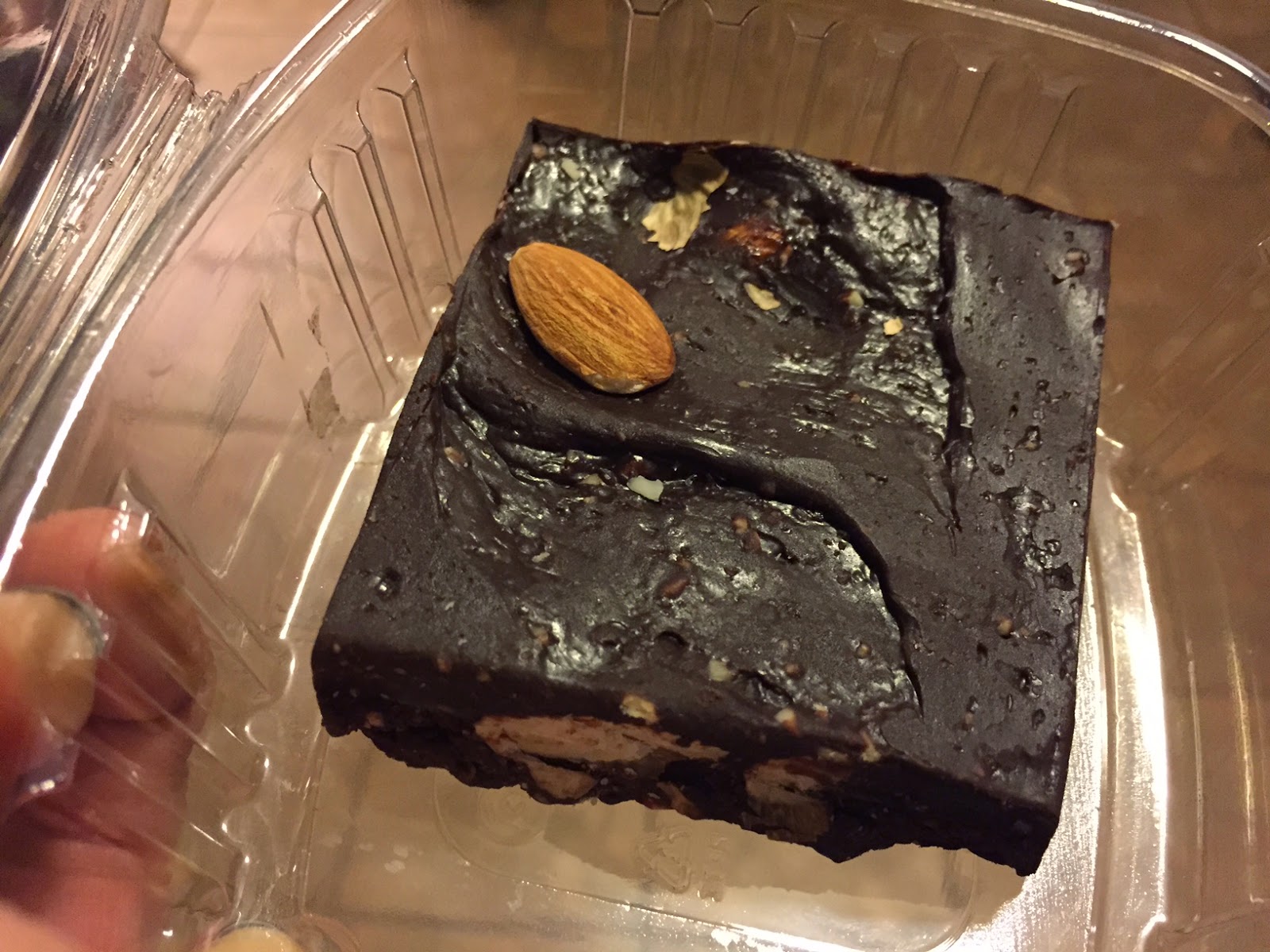 Oh man! Raw chocolate is so good! And add a little almond butter. Whew. I could eat this everything. In fact, I have been. It's very rich, so a little bite will do ya. I've been snagging a bite or two daily!

And they also included my very favorite of their desserts (that I've tried anyway!) — Meyer Lemon Tart with Almond-Coconut Crust and Pomegranate Seeds. 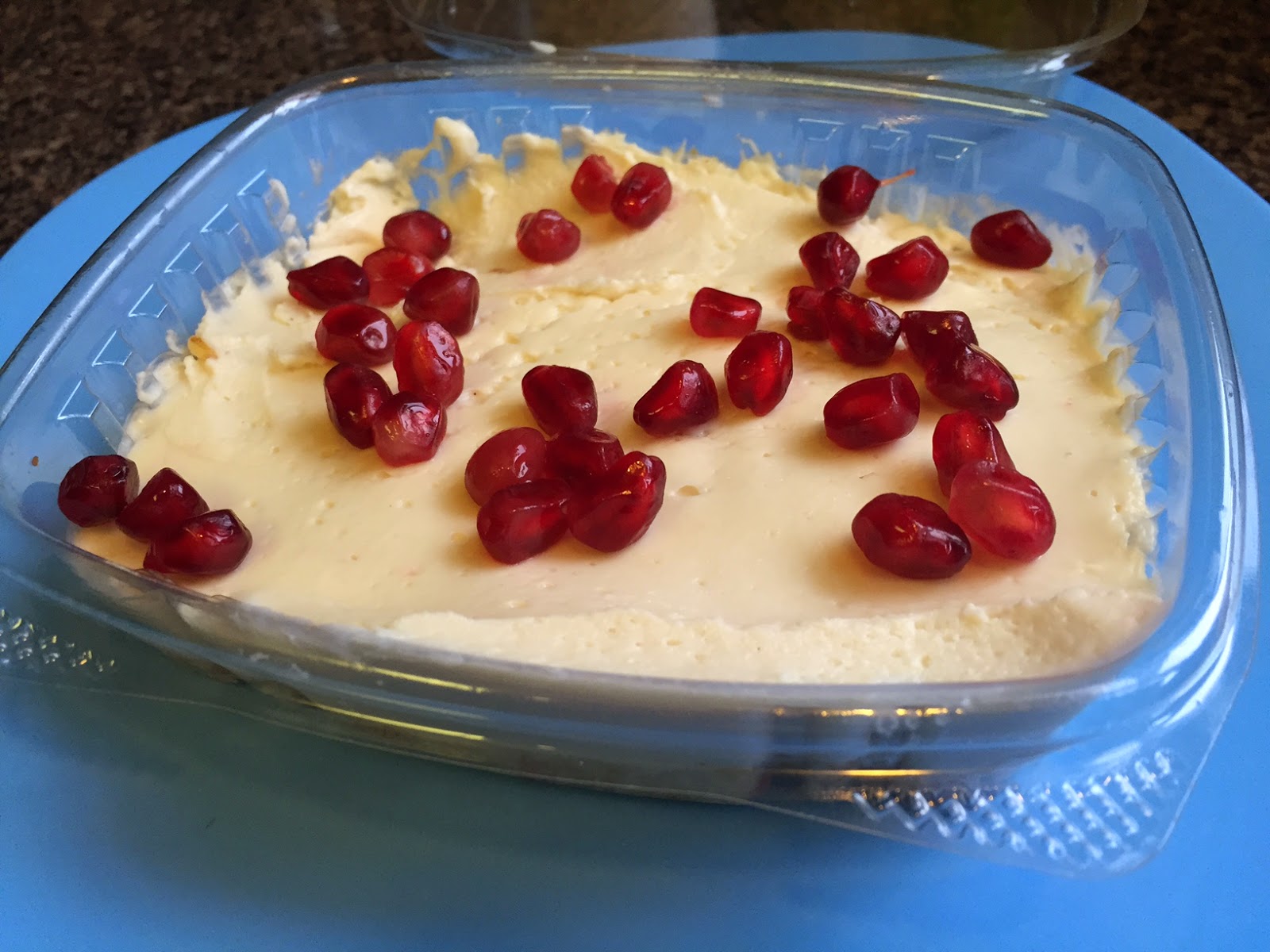 If you asked me to pick any flavor of dessert, I'd go lemon every time. I'm such a lemon person, and this is just creamy and lemony and perfect in every way. There's a cashew cream on top and the crust is made with chopped almonds and pecans. Even my omni boyfriend loves this. He's been trying to steal bites, but I yell at him when I catch him.

If you live in Memphis and would like to check out the Raw Girls delivery service, here's a link. Perfect for anyone who doesn't have time for all that raw food prep and perfect for your New Year's healthy eating resolutions! They offer juice cleanse programs too!
Posted by Bianca at 5:44 PM

I have to say that Raw Girls Memphis is hands down the best I've had. I am jealous of your box! I cannot recommend their cleanses highly enough. We will be eating their meals through our kitchen renovation. I wish they would write a cookbook (hint, hint).

Just wanted to say I just got your book and can't wait to read it :)