My best friend Sheridan's birthday was August 8th, but she and her partner Drew traveled to Hot Springs, Arkansas on her birthday weekend. So we planned a celebration for the weekend after her birthday, which was last weekend. On Saturday morning, I got up early and made the two-and-a-half hour (but really three hours with construction traffic) drive to Little Rock, where they live.

We had a super-fun time, and as always, everything centered around eating (and drinking). Because isn't that all that really matters? I arrived just a little after lunch, so we had a late lunch at Little Rock's new totally vegan restaurant, The Veg LLC. 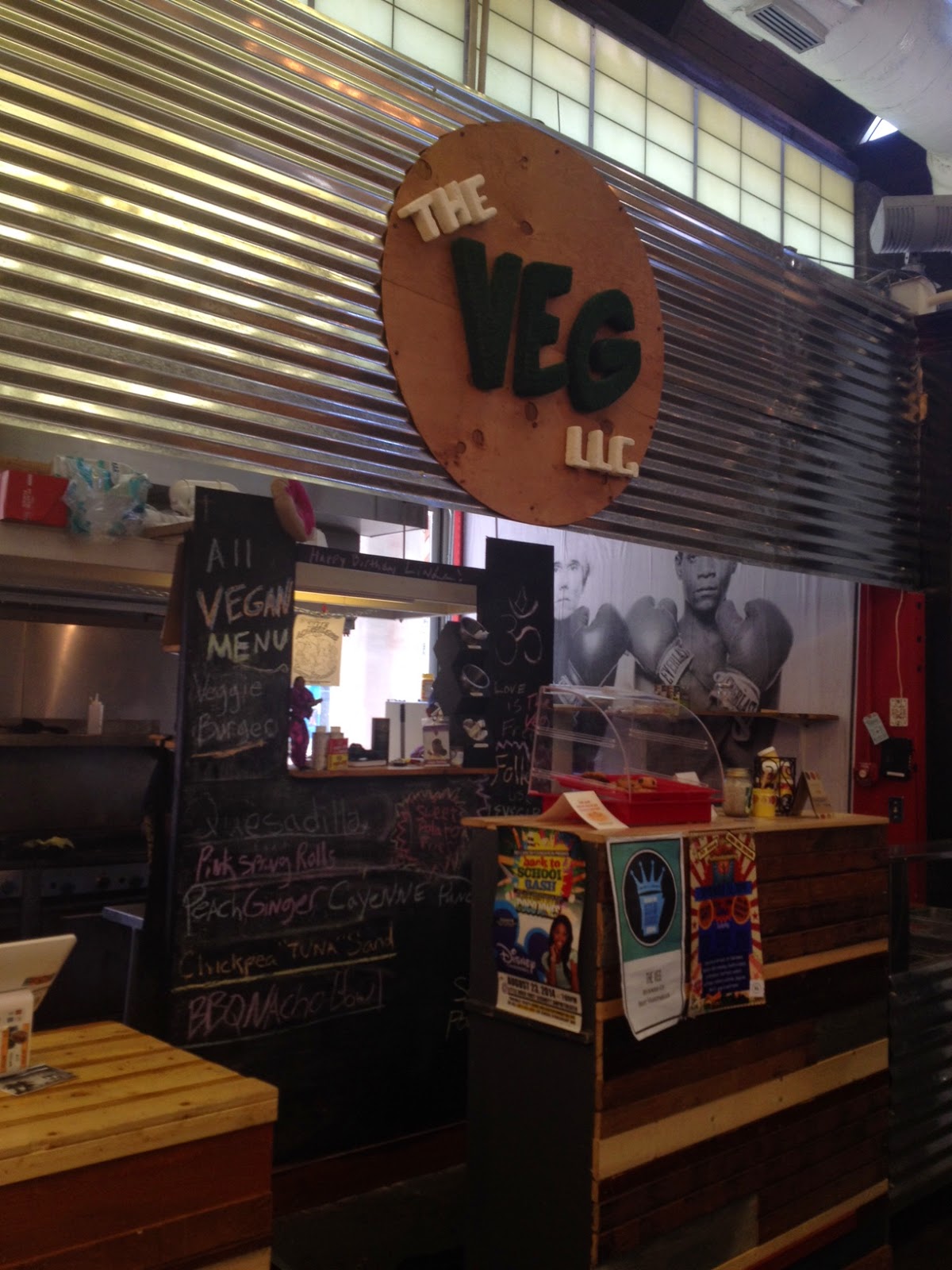 It's actually a booth inside the Rivermarket Food Pavilion. There are all these booths, many with vegan options, and communal seating in the center. Look at their adorable MC Hammer doll! 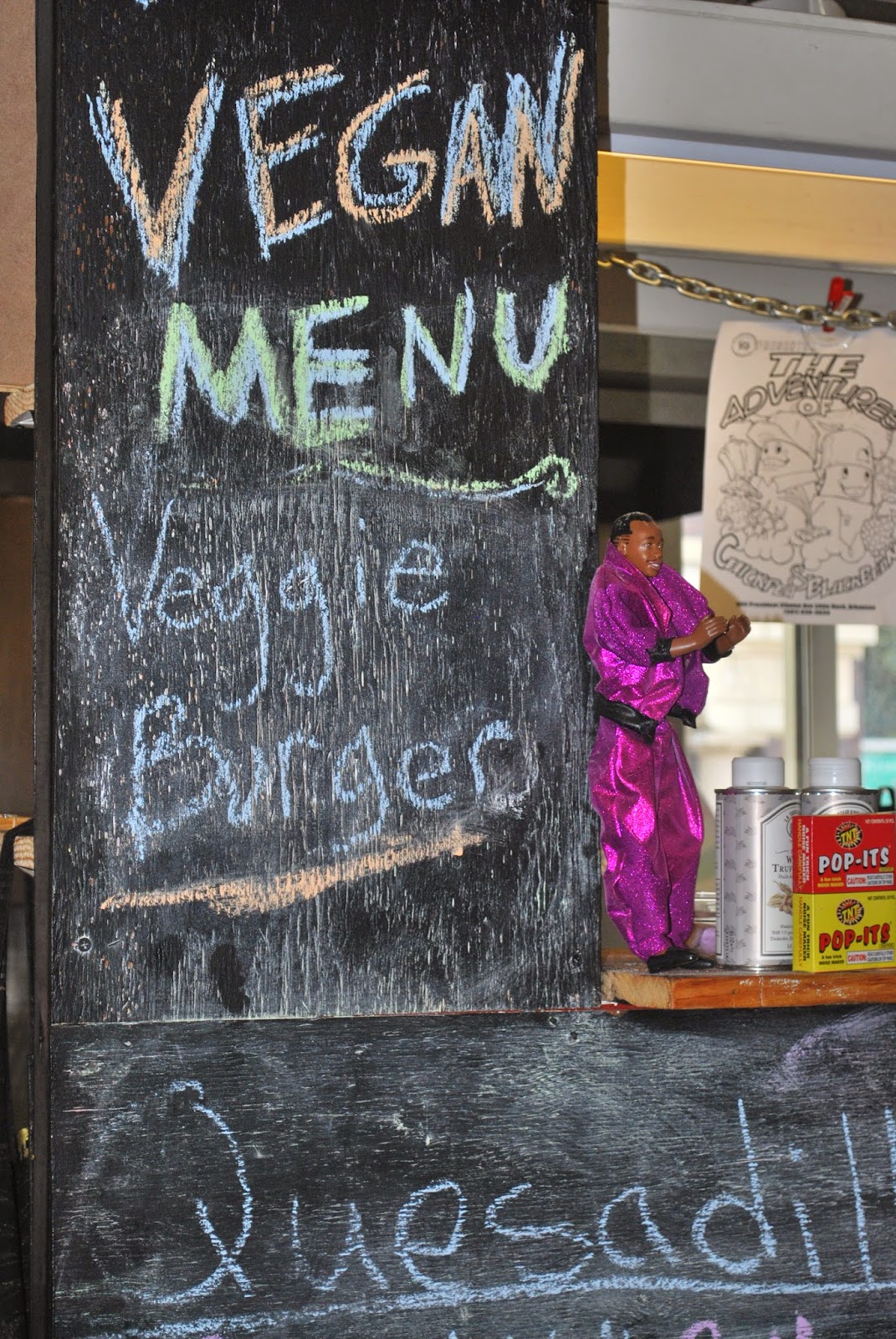 I was super excited to finally try an all-vegan place in Little Rock! The menu rotates daily, but on Saturday, they were offering BBQ Nacho Bowls. But rather than traditional nacho chips, this was a burrito bowl stuffed with BBQ lentils, sweet potatoes, lettuce, and Tofutti sour cream. The combo of lentils and sweet potatoes with BBQ was really lovely. And it was fun eating an open-faced burrito. 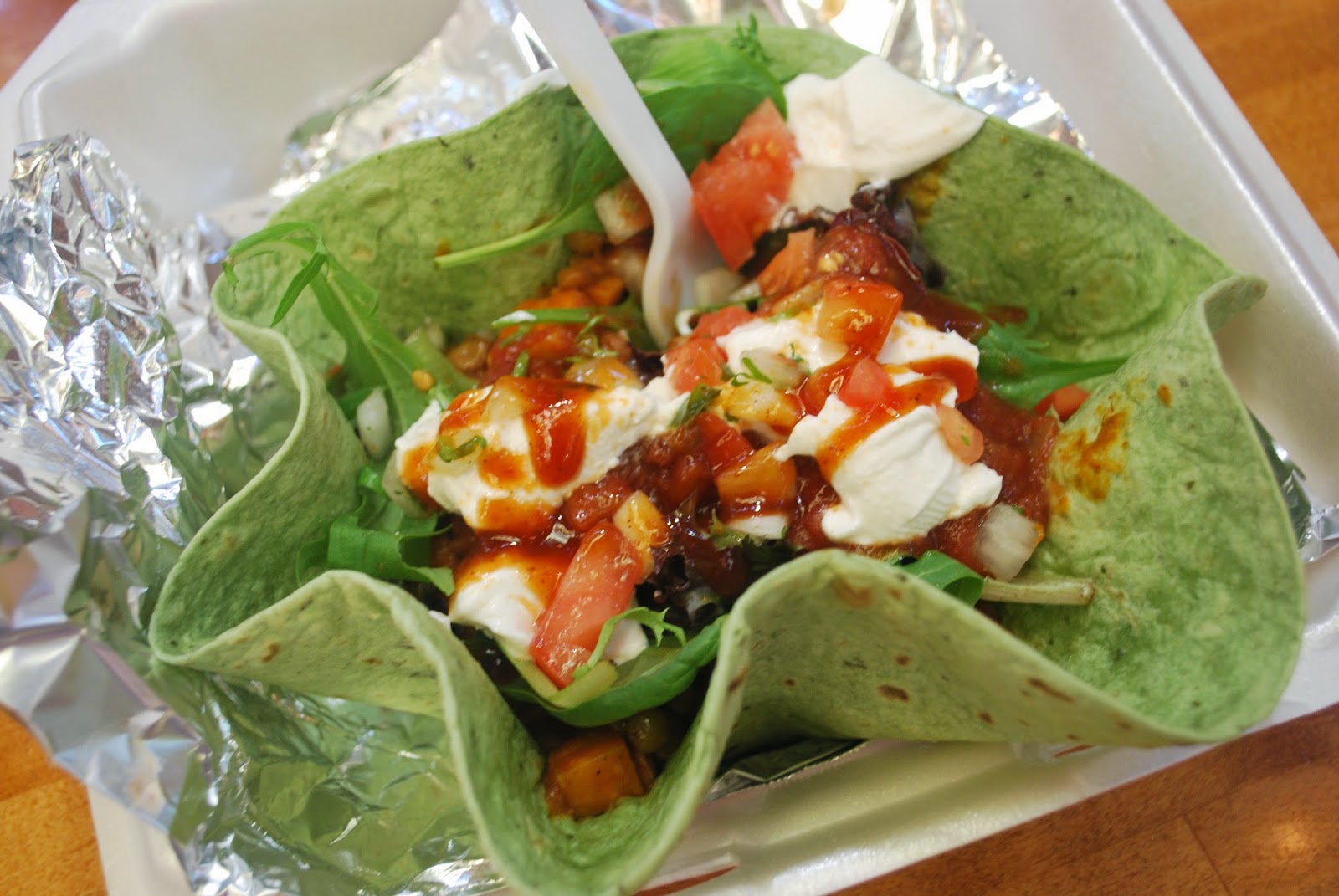 I also ordered the Peach-Ginger-Cayenne Punch, a naturally sweet and spicy juice with a hint of rosemary. It was perfect for the scorching afternoon. 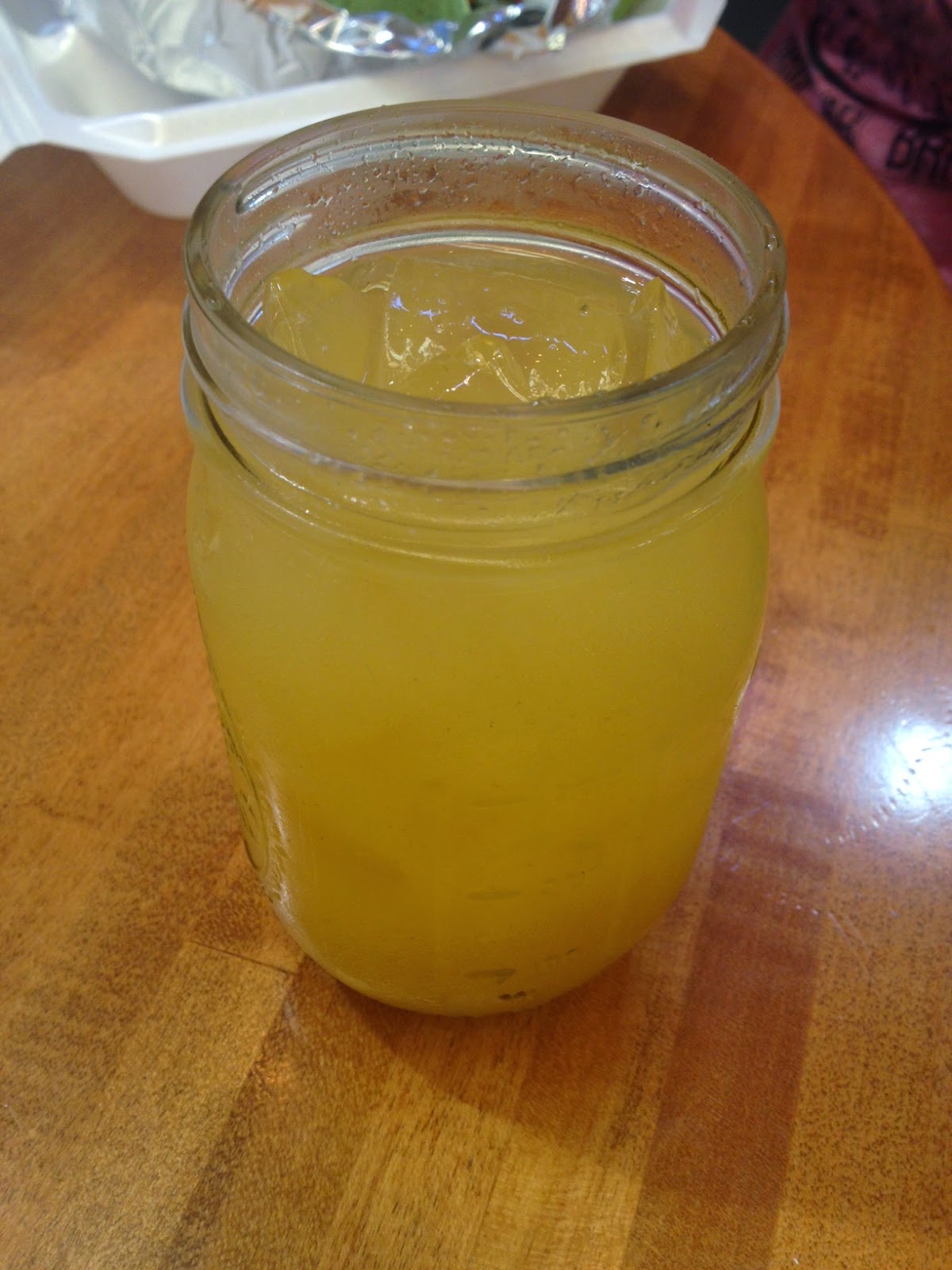 Drew ordered some Pink Spring Rolls for us to share (the pinkness made me think of my friend Cassi and her upcoming Pink Noodle vegan restaurant in Memphis!). These were fresh and crispy and were served with a yummy sauce. The pinkness came from red cabbage tucked inside these rolls. 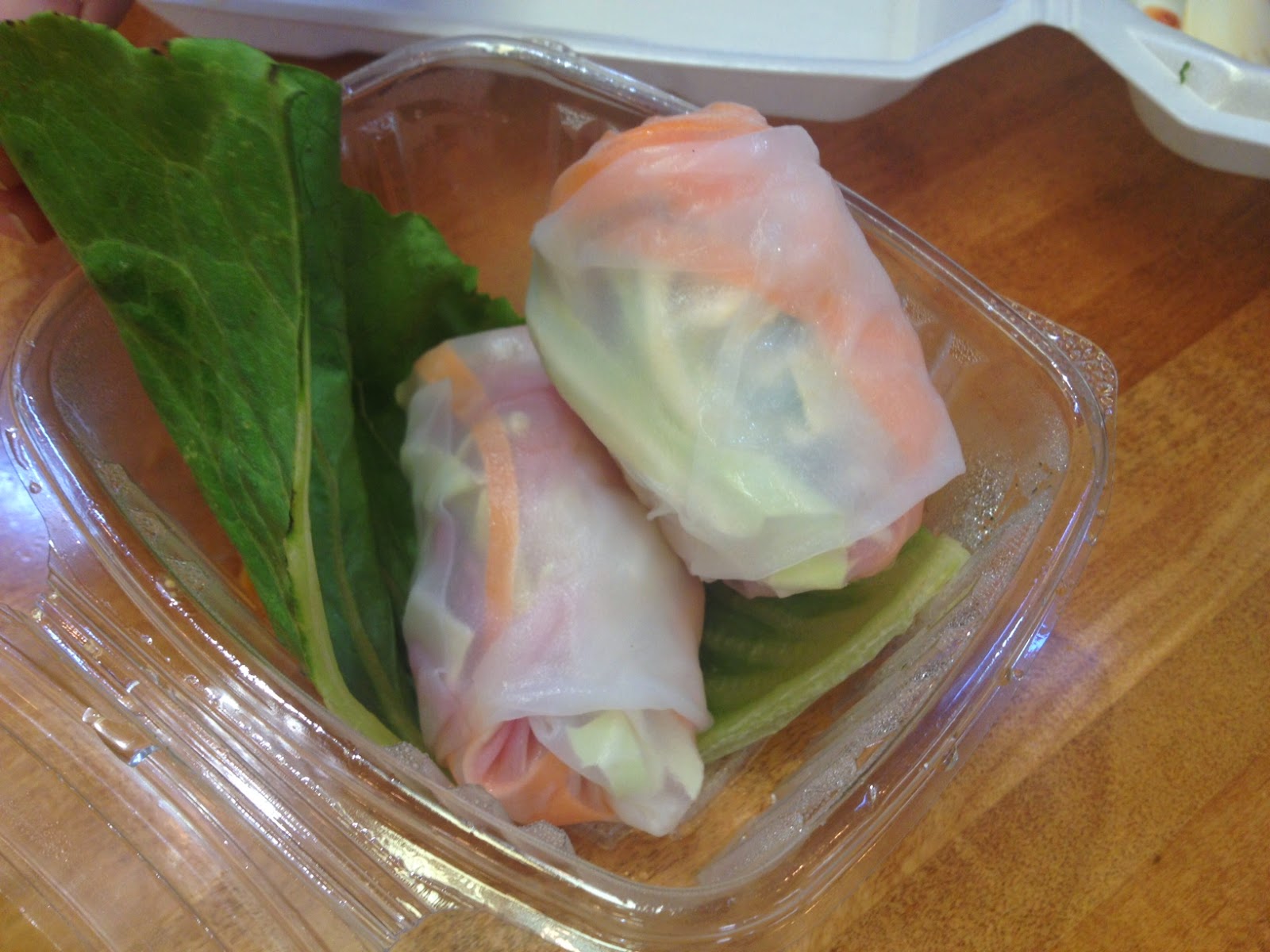 And they gave us free Chocolate Chip Cookies! These were chewy and cakey. Yum! 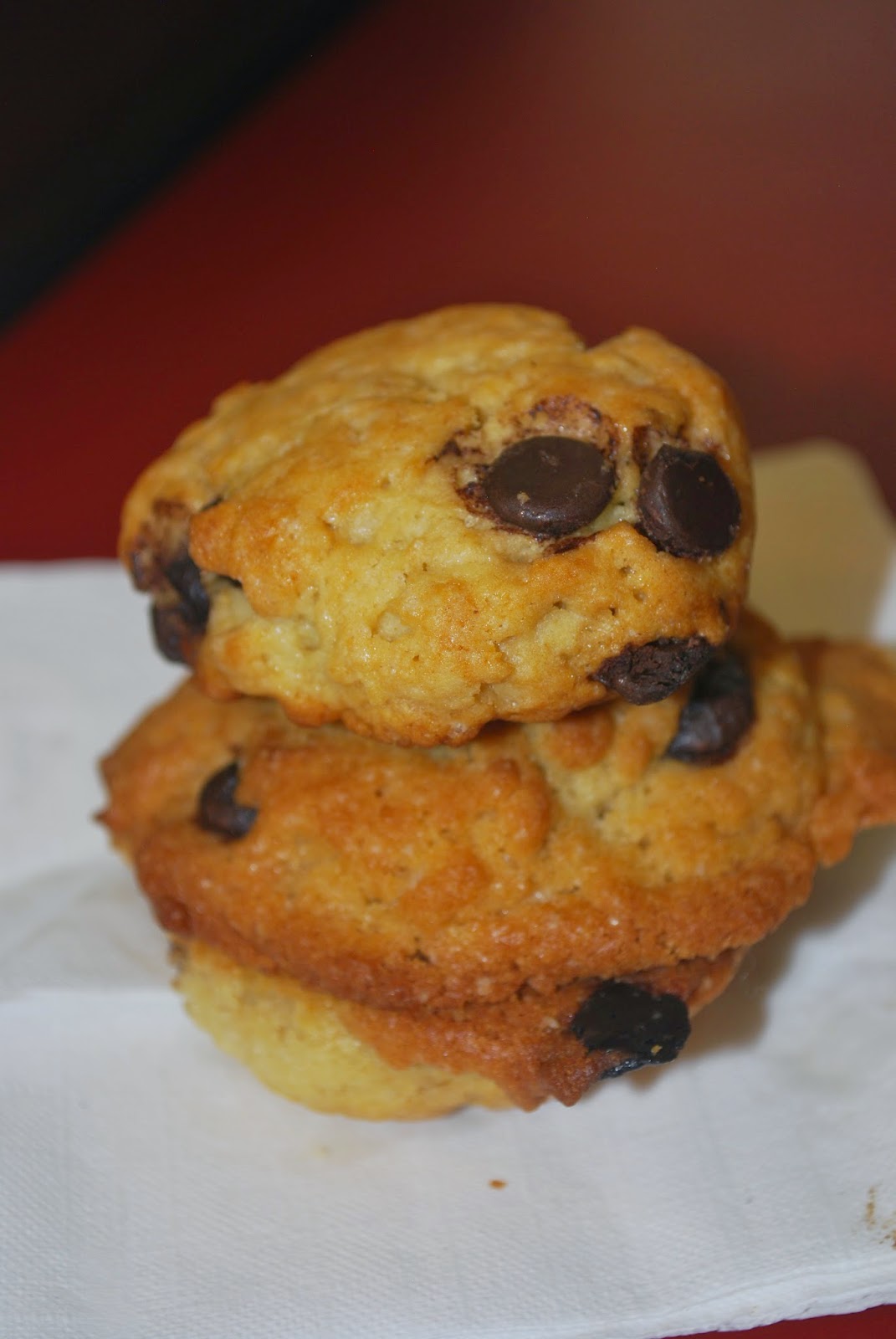 After lunch, we headed back to Sheridan's for birthday cupcake time! 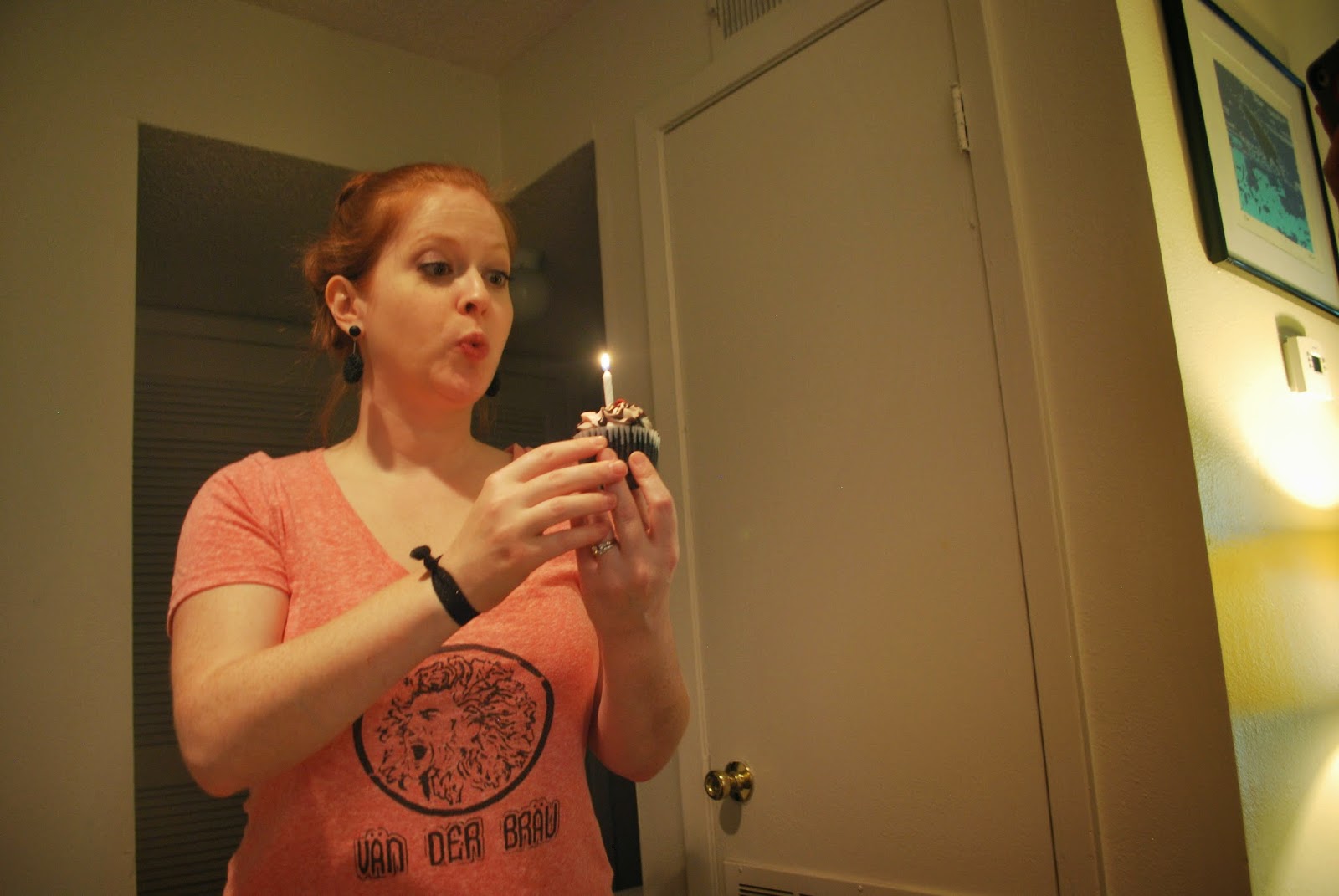 Stephanie (aka Poopie Bitch) baked cupcakes as her birthday gift to Sheridan. She sent me to Little Rock with Chocolate Strawberry Cupcakes and Vegan Maple Bacon Cupcakes, and Kristie from Imagine threw in some Fauxstess Cupcakes (also baked by Stephanie) just for fun. I had the chocolate strawberry and the maple bacon and OMG! Cupcake coma. For realz. 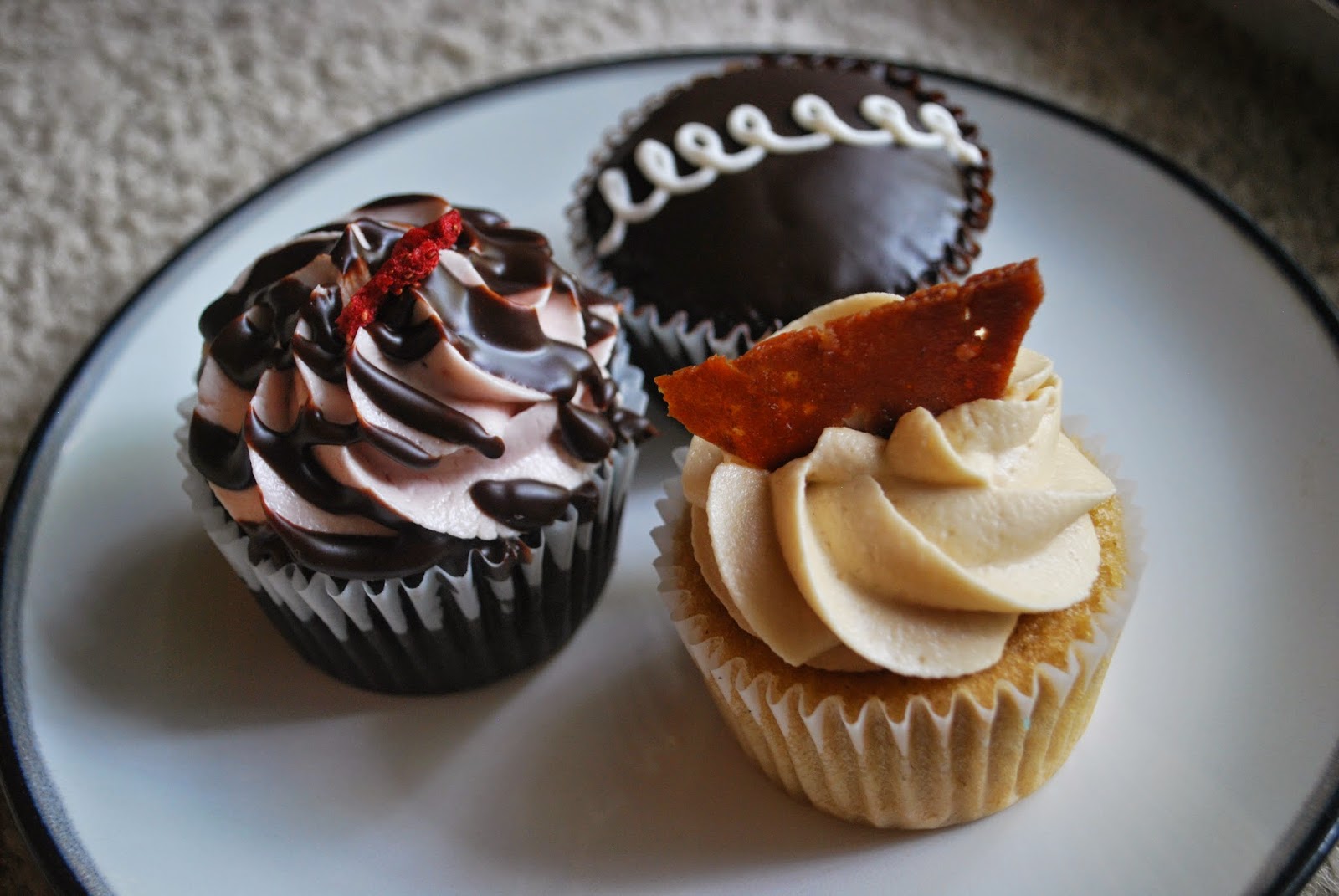 After eating cake, it was time to eat again! This time, we headed to the Arkansas Alehouse, home of Little Rock's Diamond Bear microbrewery. 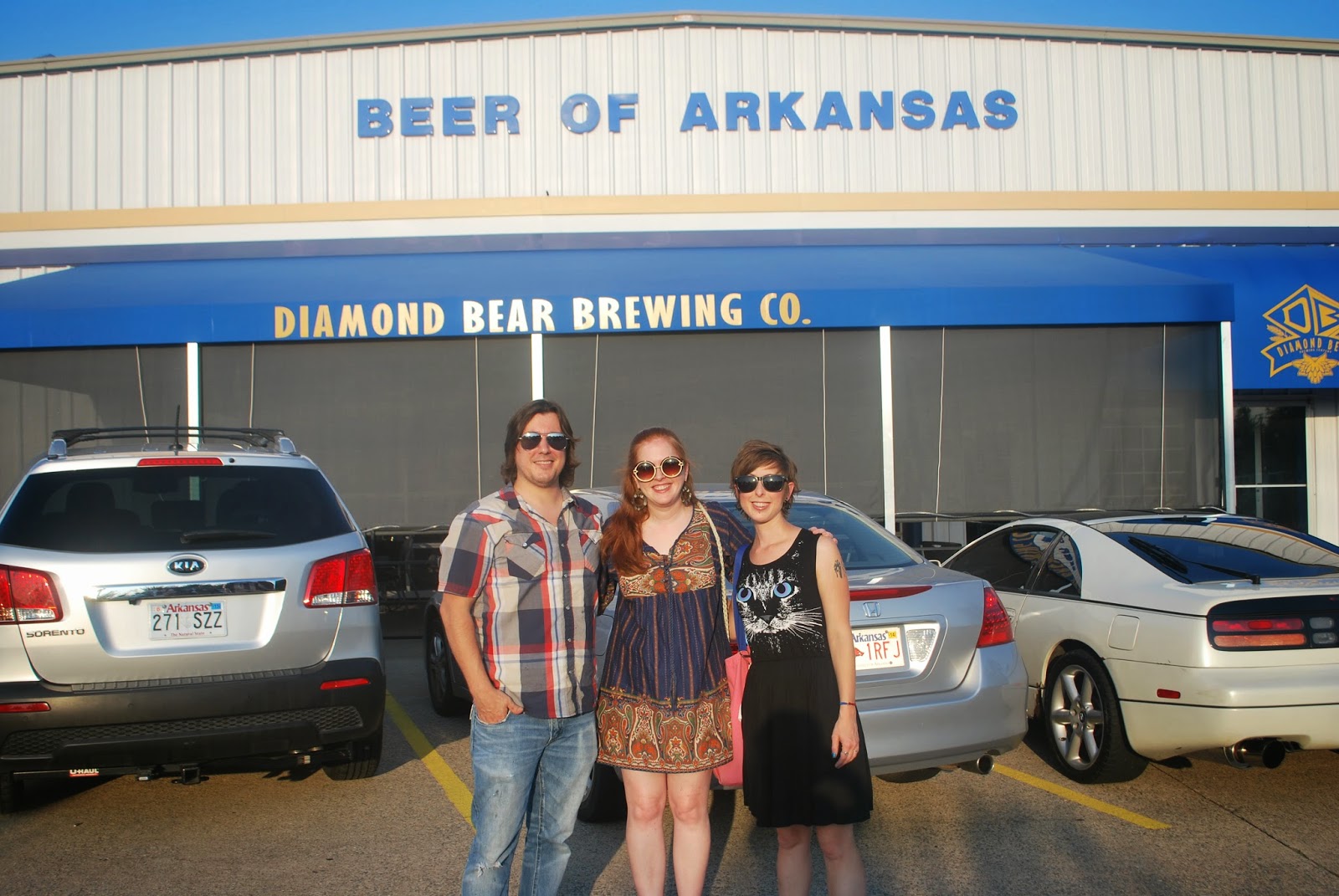 I started with a Paradise Porter. Love a good dark beer, no matter what time of year. 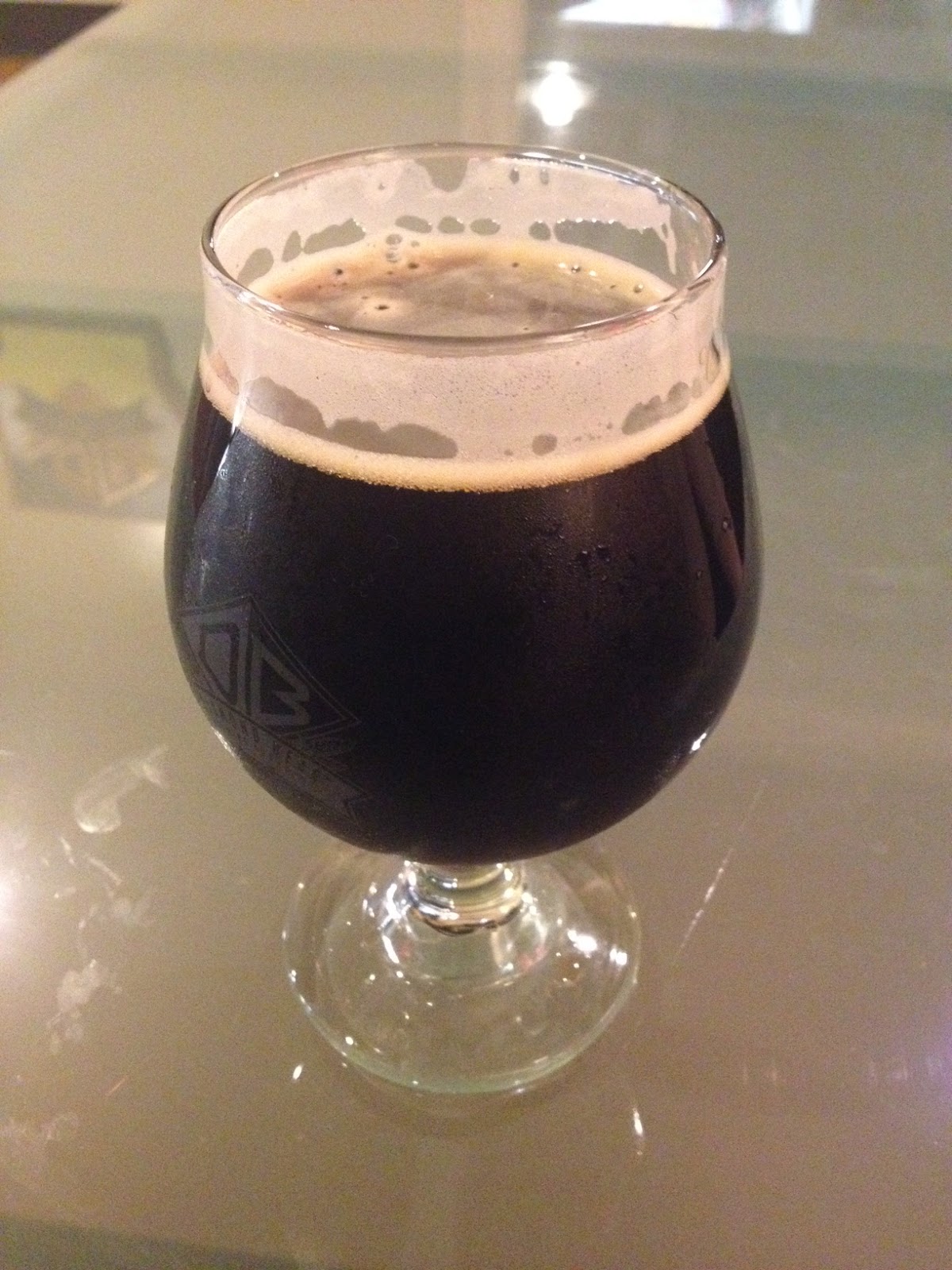 I followed that with Diamond Bear's Pale Ale, definitely my fave beer of the night. It seemed less hoppy than most pale ales, and I liked that. 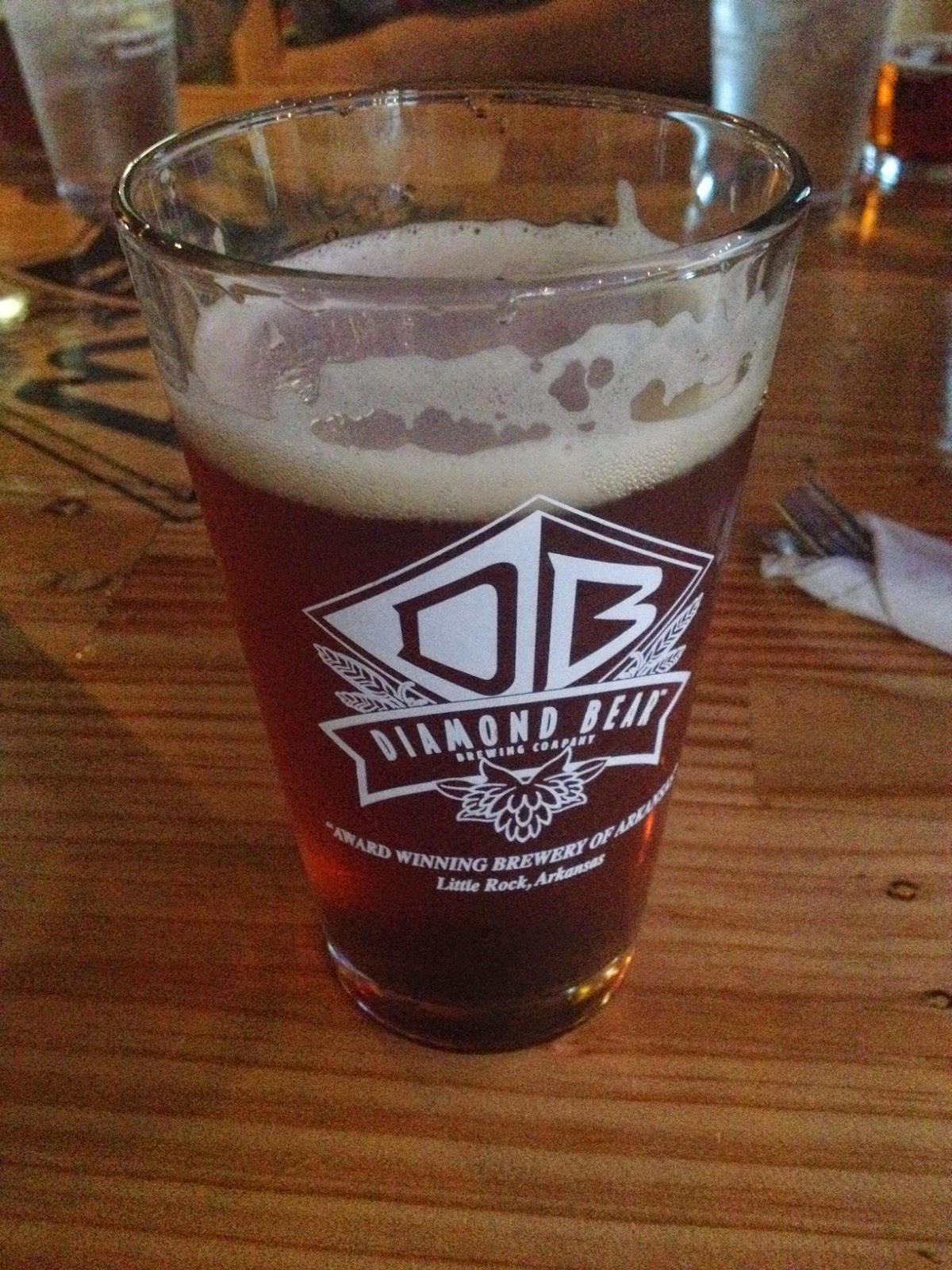 Our friend Dana of Vanishing Veggie had raved about the Veggie Sandwich here on her blog. And while I don't typically get excited about a veggie sandwich, we knew that if Dana loved it, it had to be good. This wasn't your usual veggie sandwich, folks. 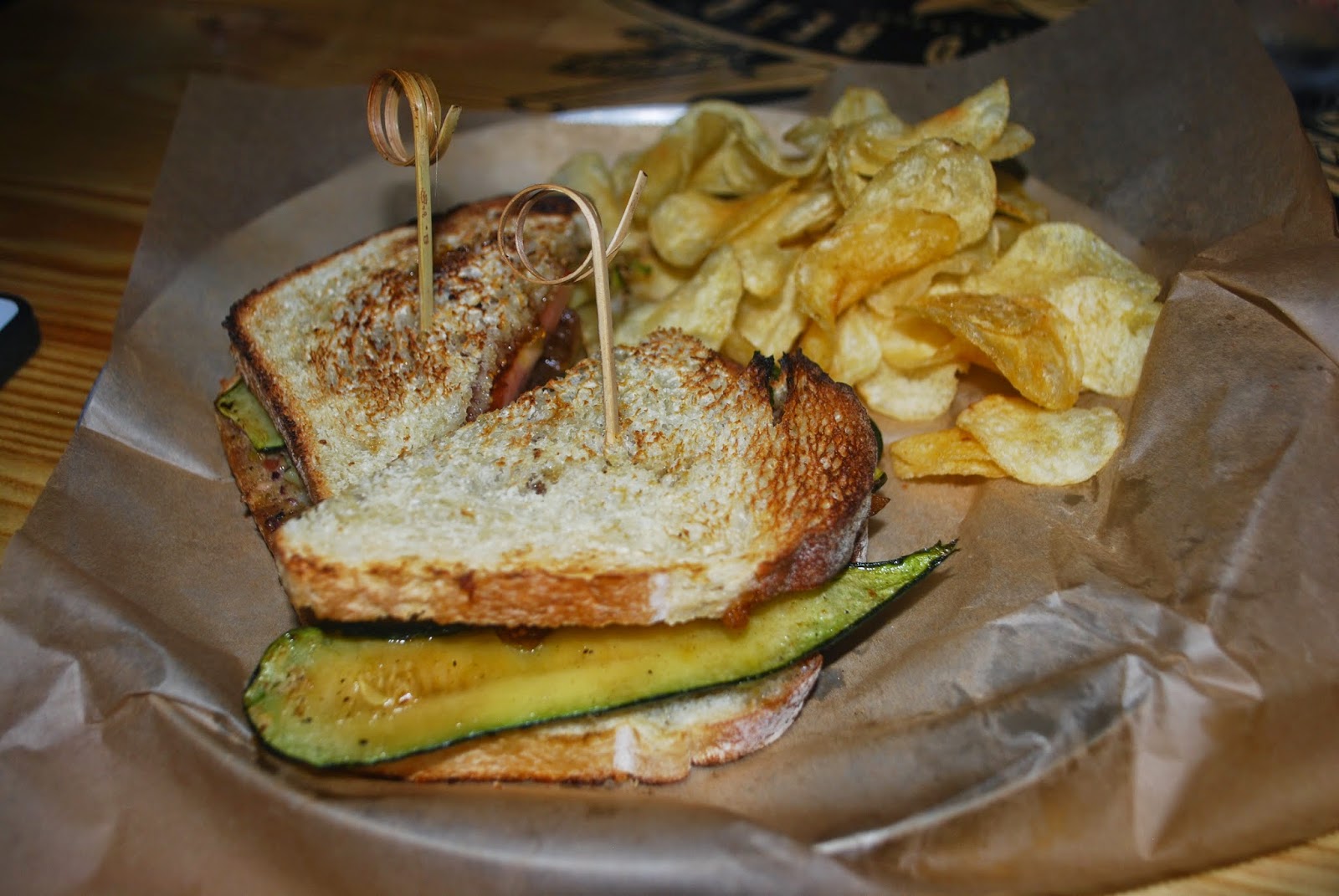 BEST DAMN VEGGIE SANDWICH I'VE EVER HAD. And I mean that. Like ALL CAPS mean that. And here's why: The roasted squash and tomatoes and other veggies are topped with oniony fig preserves. See the figs! 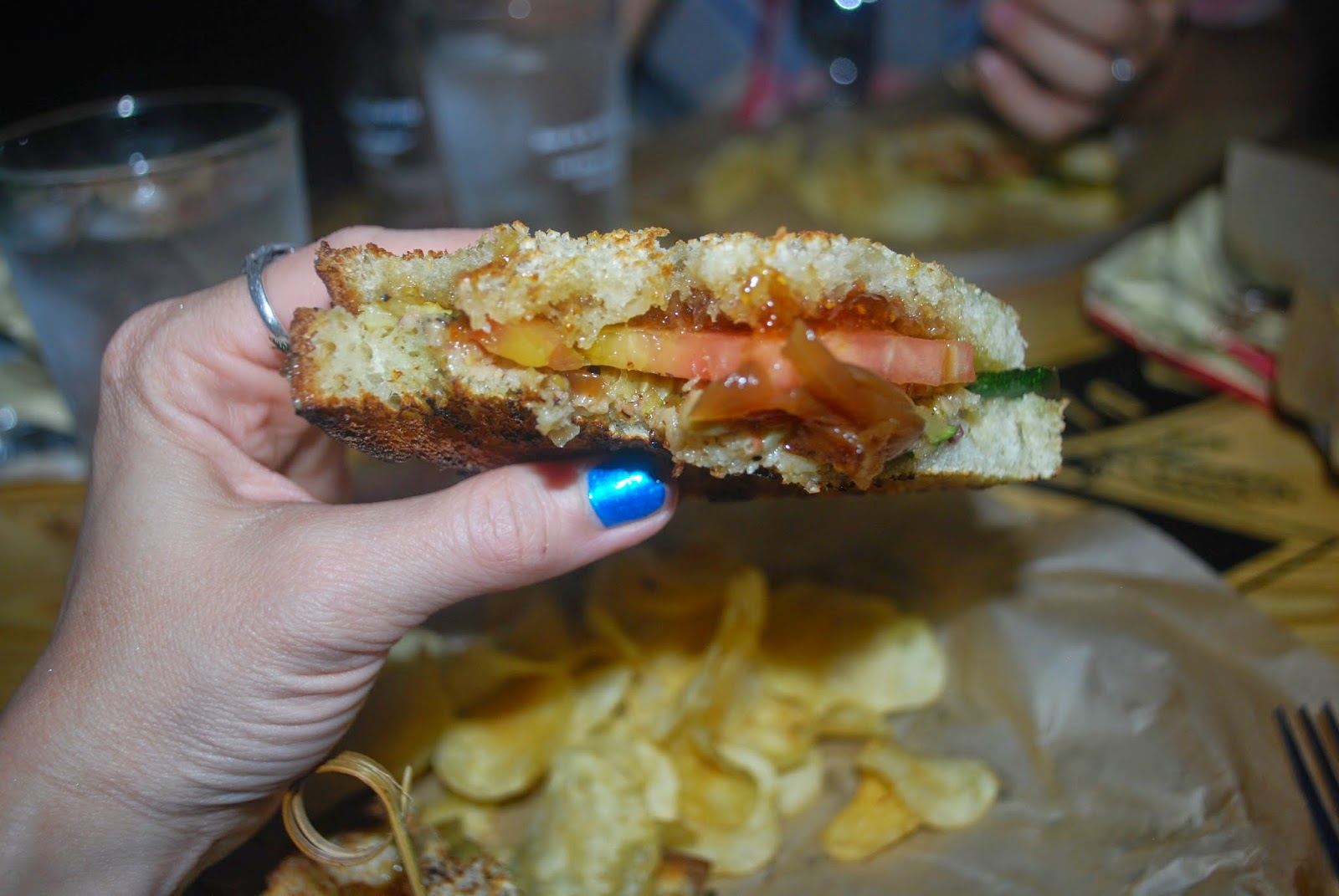 Wow. Just wow. I will be recreating this at home.

After dinner, we went back to Sheridan and Drew's apartment and swam in their pool for a bit. Then we crashed so we could get up early and eat more food. On Sunday, Solfood Catering was hosting a special vegan brunch at the Veg LLC. There were two options — Banana Pancakes with Blueberry-Pear Compote and Apple-Sage Sausage or Buddha's Delight Vegetable Fried Rice with Potstickers.

Pancakes sounded awfully good, and Sheridan got those. I took a couple bites, and they were fantastic. Love the compote, and the sausage was homemade and delicious. Pancakes don't really photograph well (and my pic is out of focus), but I promise they were delicious. 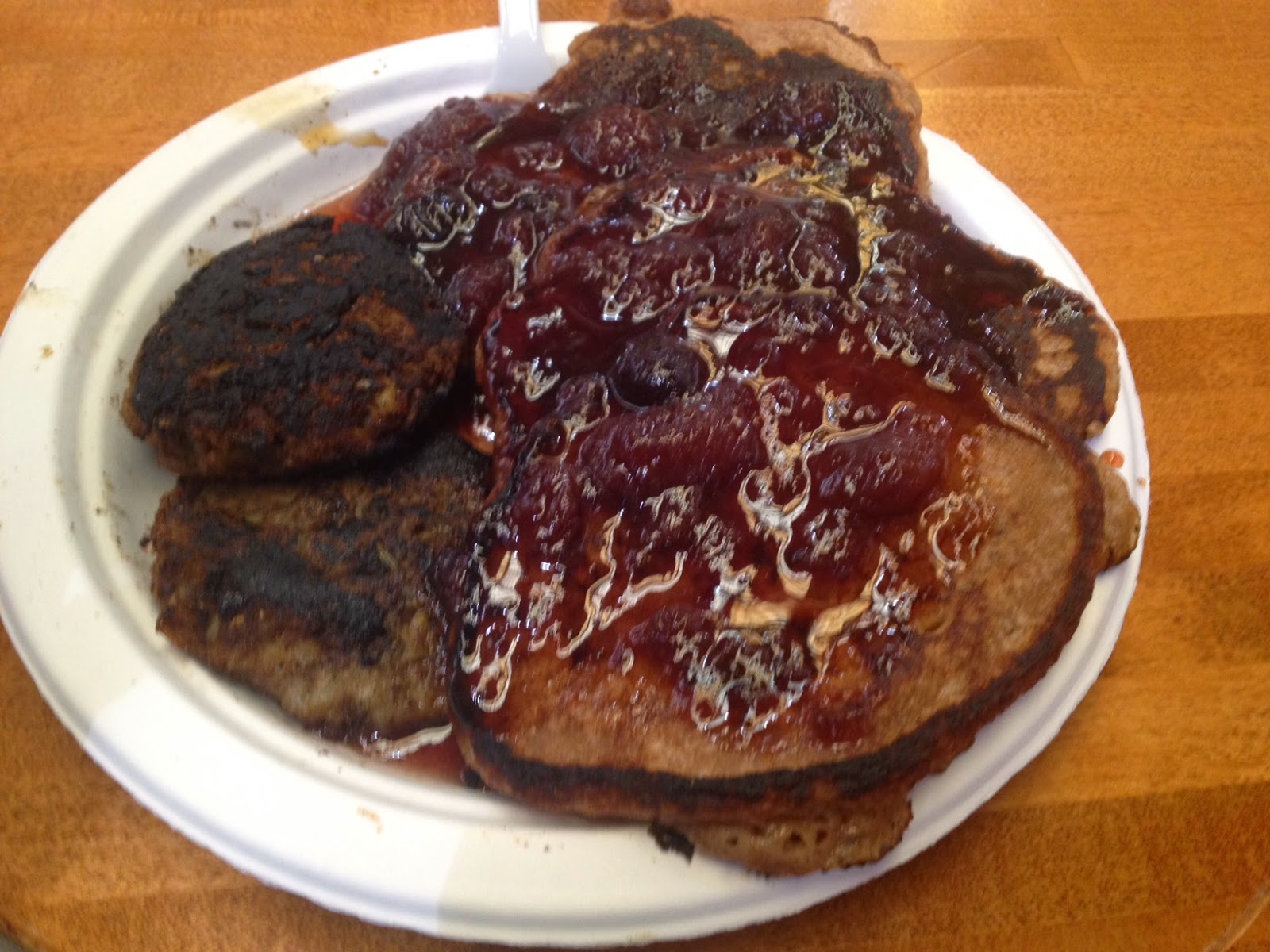 But I couldn't resist fried rice for breakfast. This was perfect fried rice chock full of veggies and with just the right amount of oil for a Sunday morning hangover. And the potstickers were pan-fried, which I prefer over streaming. And they had a lovely pear sauce. 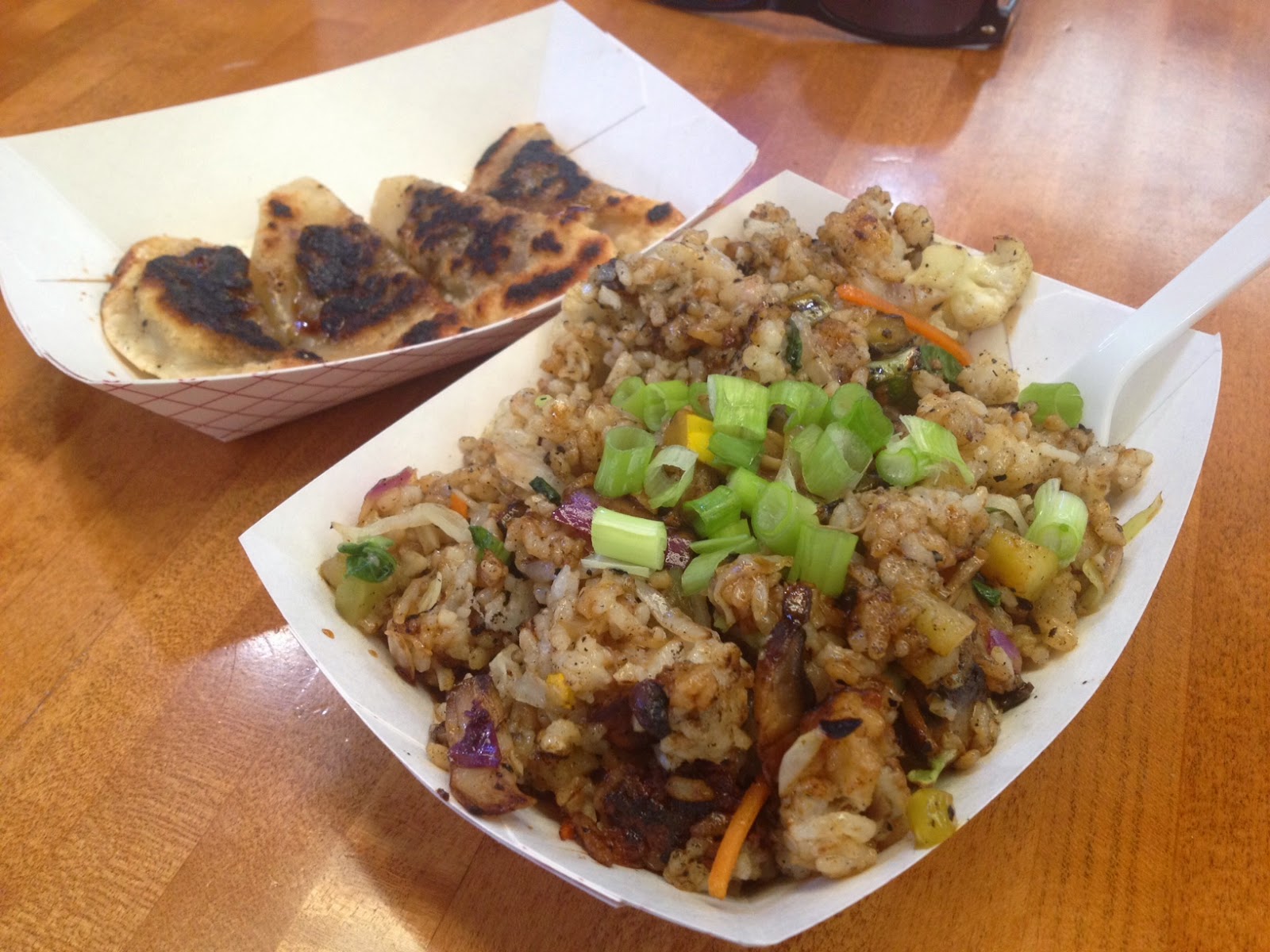 While were stuffing our faces, Dana of Vanishing Veggie came in for brunch too. She had a big group of friends to entertain, but she stopped by to chat and get a picture. 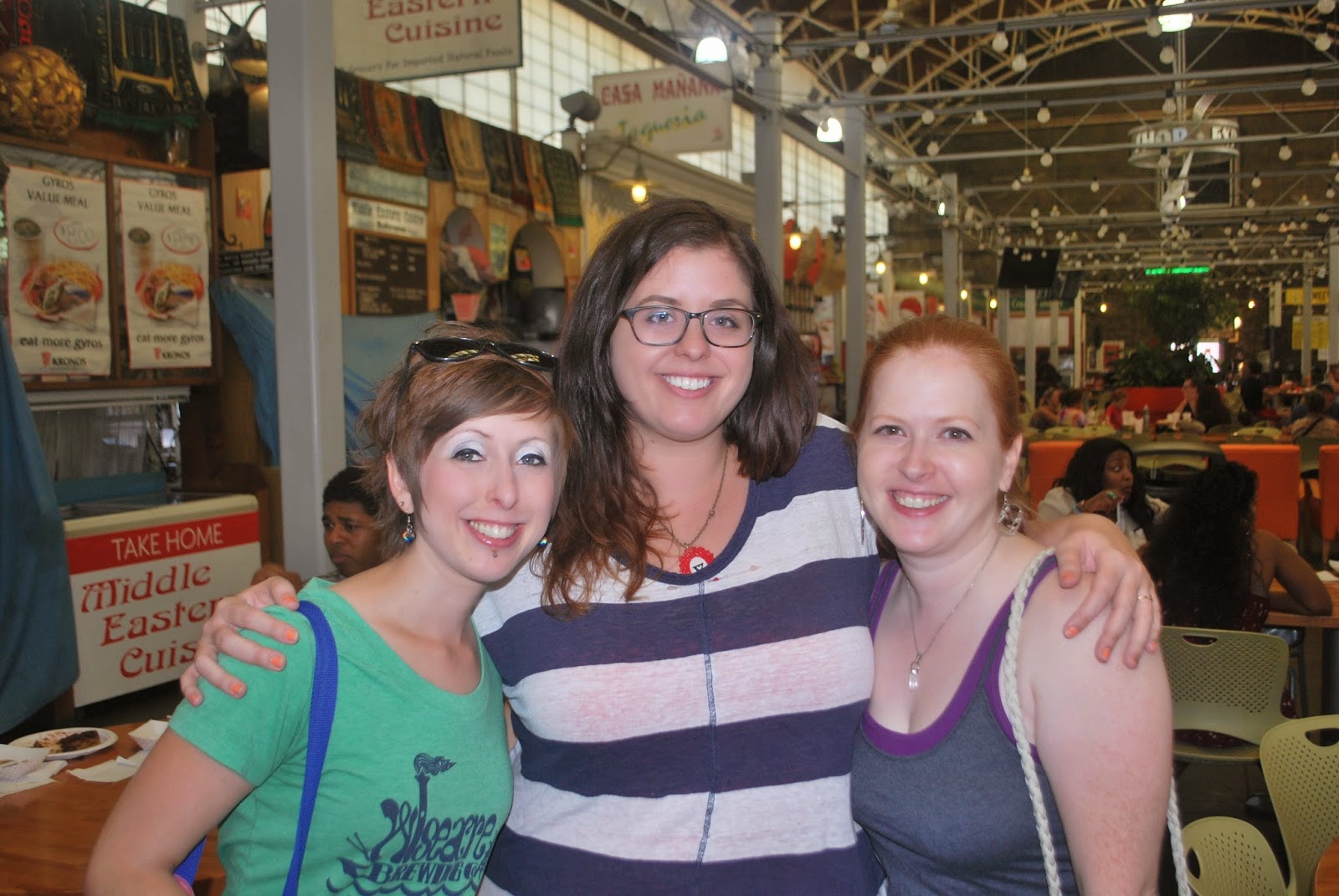 Yeeeeeaaahhhh! It was an awesome weekend! Yay food! Hahha!

I'm glad you liked that sandwich at diamond bear! Looks like you got different bread than I did, but man, I'm sure it's tasty on anything. When my fig tree explodes in a few weeks, I'm making that jam!!

Awww how fun!! Definitely looks like an amazing celebration! The meals and treats all look lovely but I'm definitely eyeing those cupcakes, the fried rice and the veggie sandwich! Yum!!