Hey y'all! This past weekend was the third annual Memphis Plant-Based Food Fest! This year, it was held in Audubon Park and it stretched over two days (Saturday and Sunday). But I only went Saturday because I didn't have time today. On Saturday, I lead a cooking demo in the morning. I made the Cheesy Tofu Scramble and the Sweet Potato Hash from Cookin' Crunk. 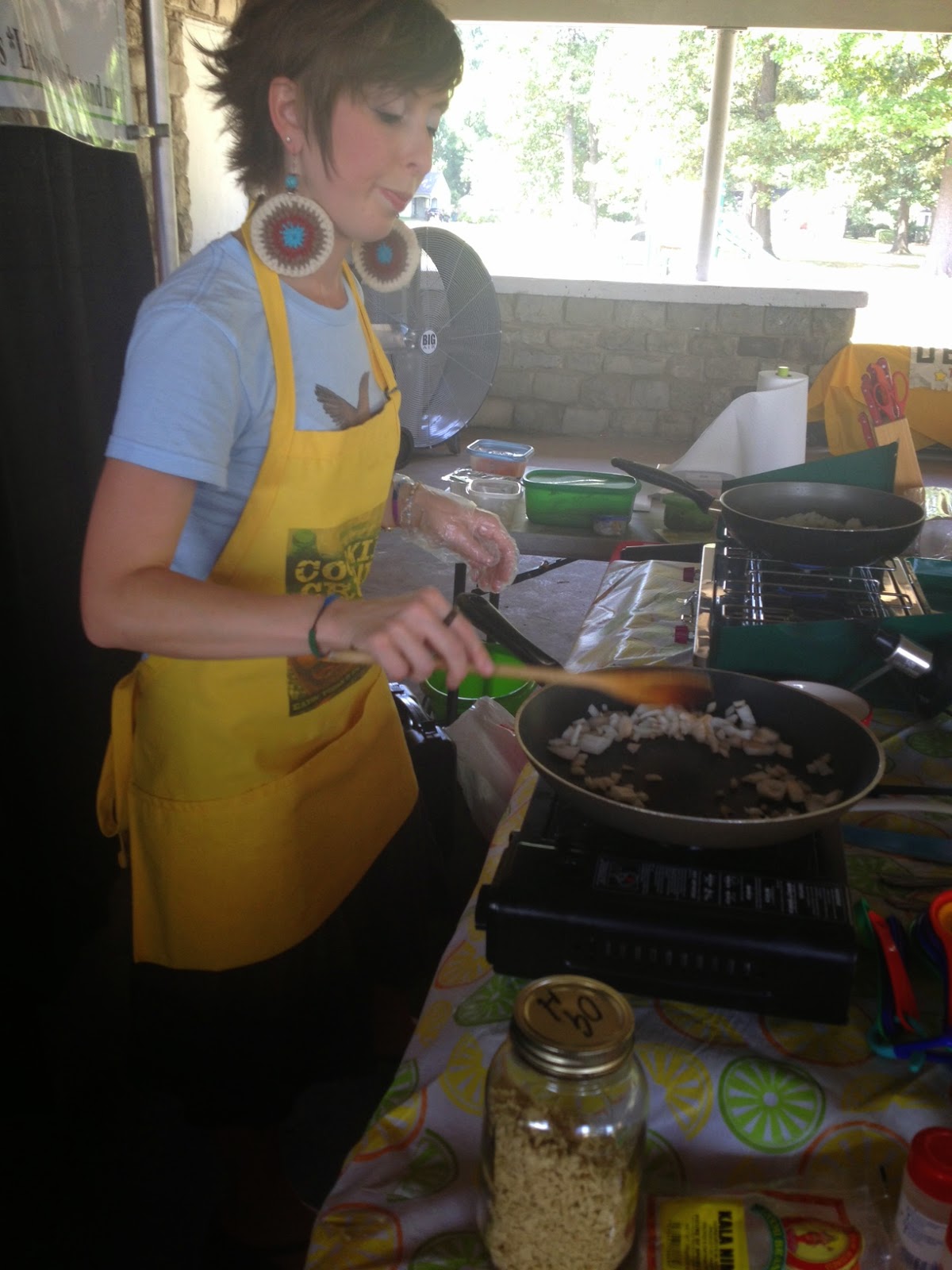 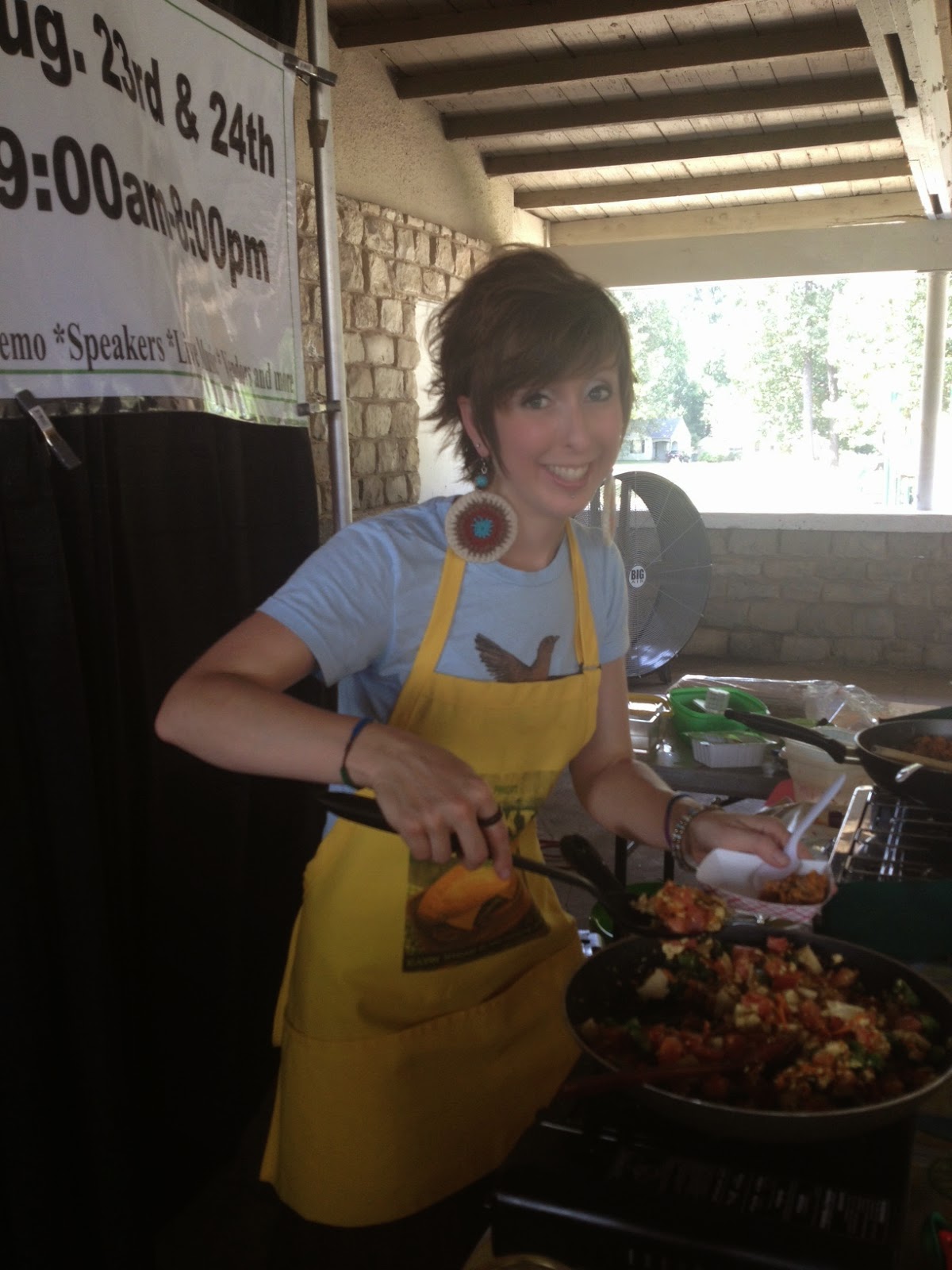 And Ms. Cassi lead her first cooking demo!!! She was so worked up about it before, but it went very smoothly. She did awesome. She made this Avocado Kale Salad that went over great with the crowd, and she got a chance to talk about her plans for Memphis' next vegan restaurant, The Pink Noodle. 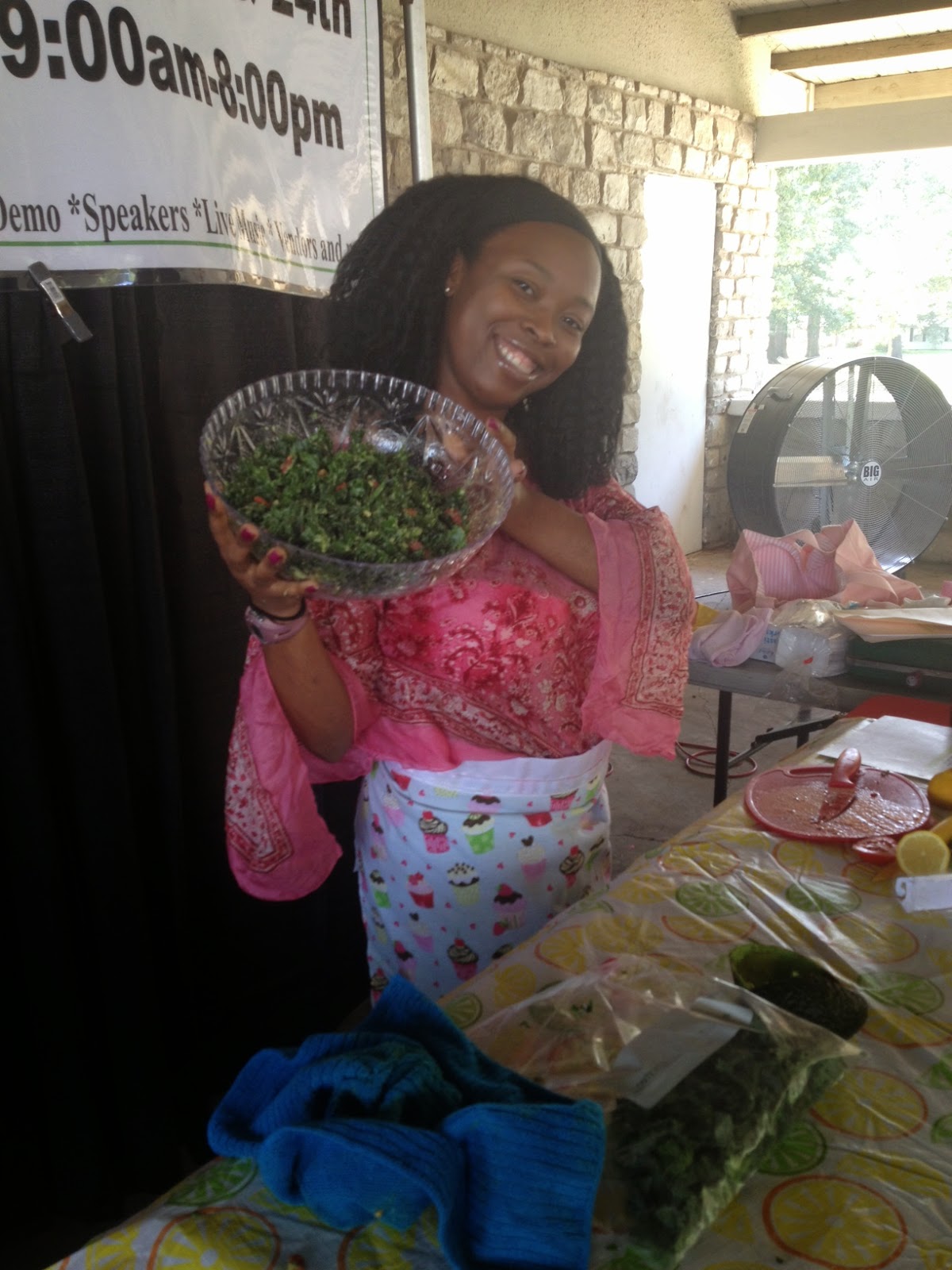 One of the highlights of the fest for me actually happened after all of my friends had left! It was 100 degrees outside, so, one by one, my friends snuck away. But I wanted to stay for Melanie Lacey's demo. She's a Little Rock vegan who came down for the fest, and she makes legendary Raw Carrot "Tuna" Salad using the carrot pulp left over from juicing. She sells the spice mix she uses, and she had some for sale there. I watched her make carrot salad and went up for seconds on my samples. And then I just had to buy some spice mix! Here's Melanie with the demo tent/speaker organizer Katherine. 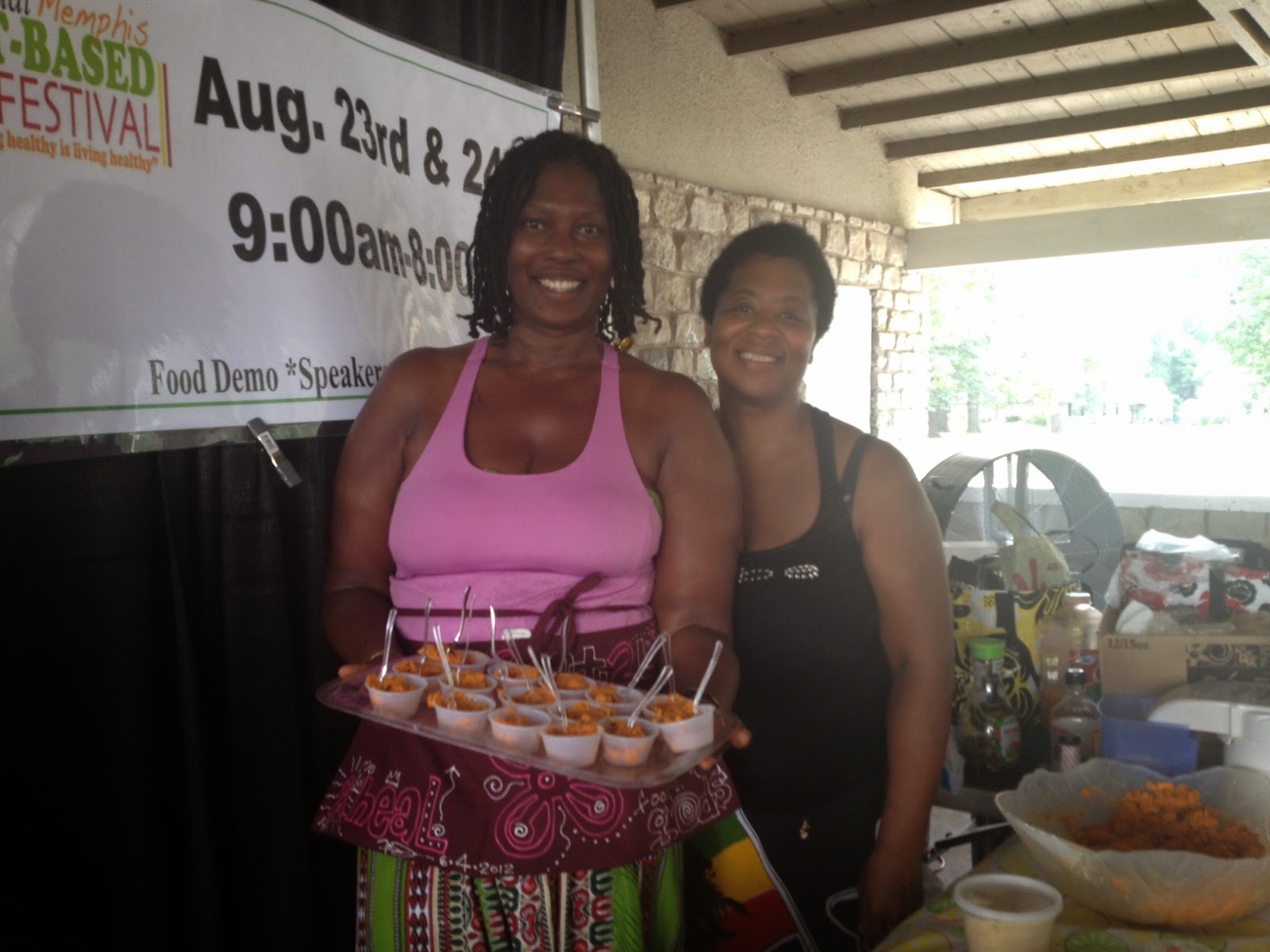 People come to vegan food fests to eat, right? Well, there was no shortage of delicious vegan food. Unlike some fests I've been to where major vegan companies come from all over the country to pass out samples, our fest is more about local vegan food vendors and artisans. So of course Imagine Vegan Cafe had a booth there. Here are Imagine's owners Kristie and Adam. 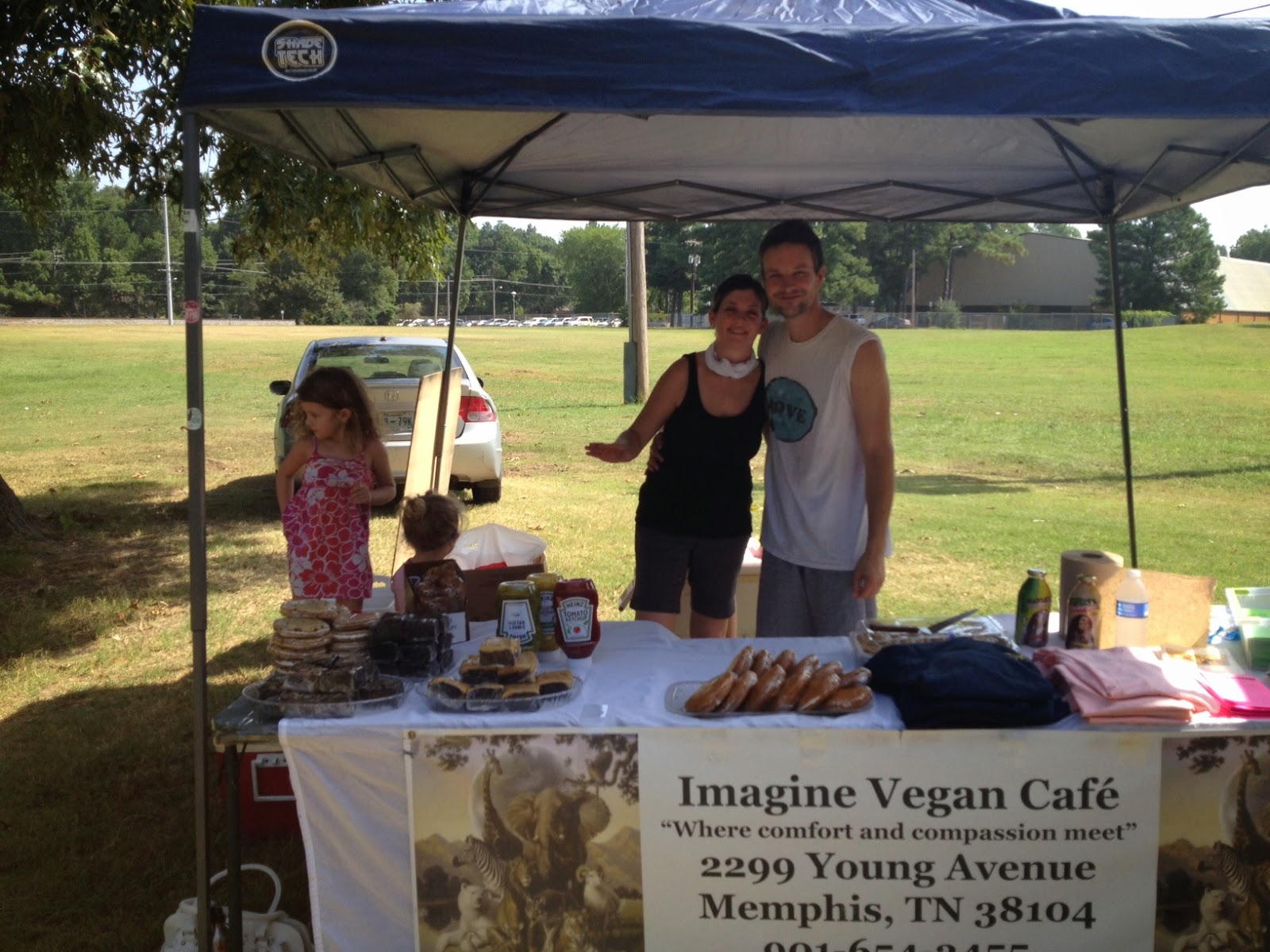 They were selling vegan hot dogs, BBQ sandwiches, and most importantly, VEGAN PIZZA BY THE SLICE!!! I scooped up this slice of Vegan Sausage Pizza before it was all gone. 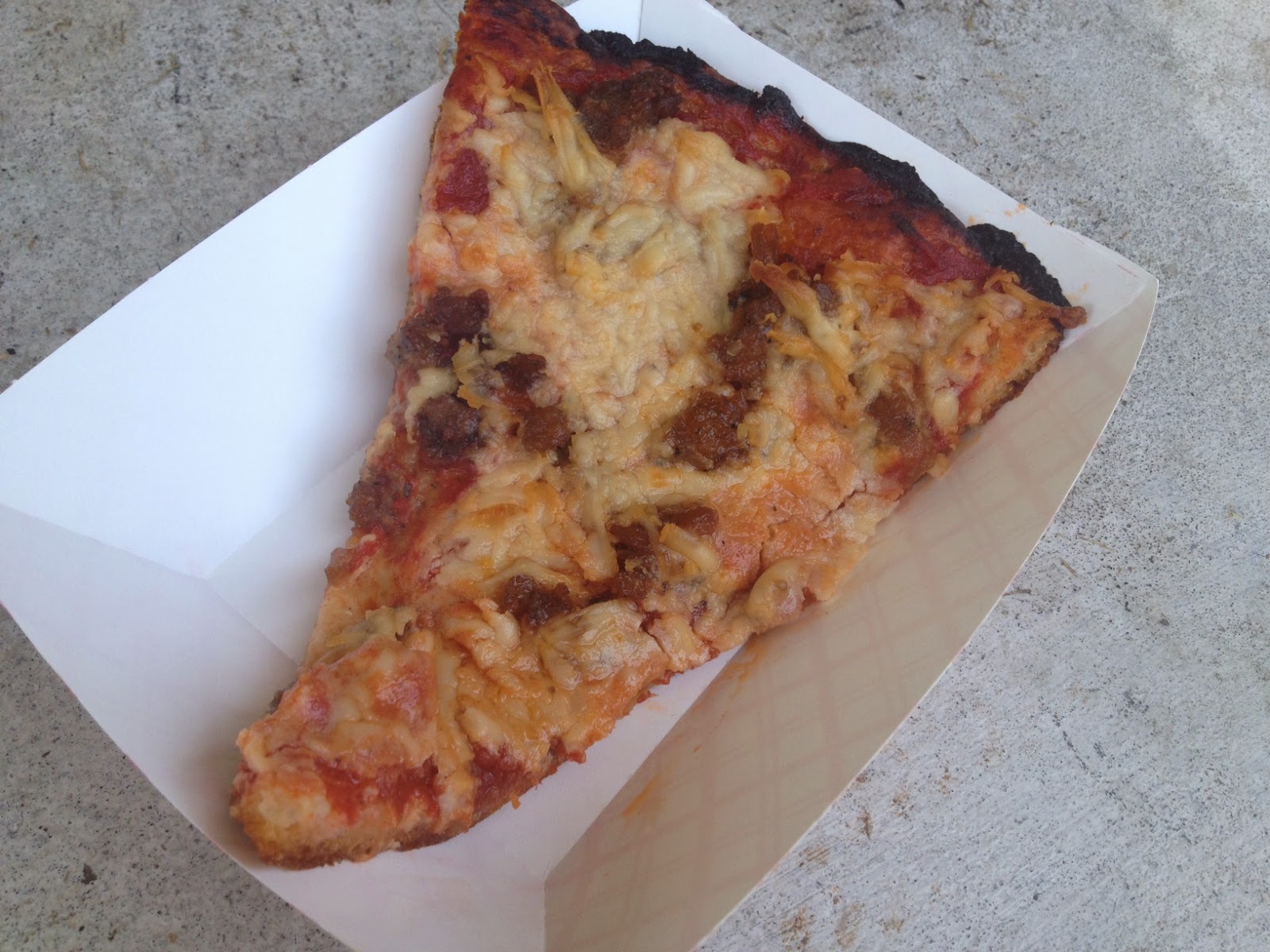 And they had a ton of desserts for sale, all baked by my friend Stephanie. 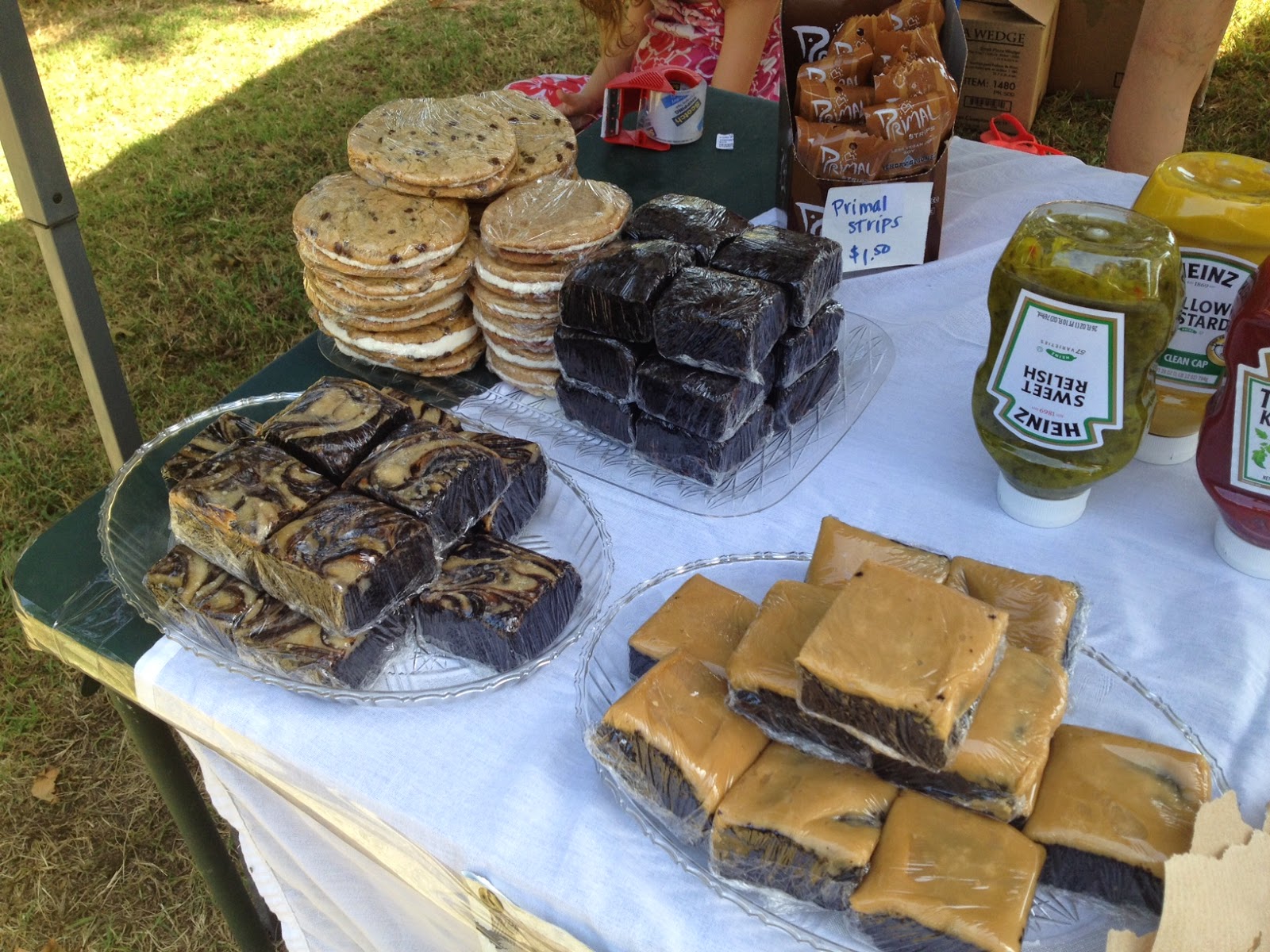 I opted for a Cinnamon Roll because those are my favorite thing she makes. And since I arrived early, I got first pick of an ooey-gooey center piece. 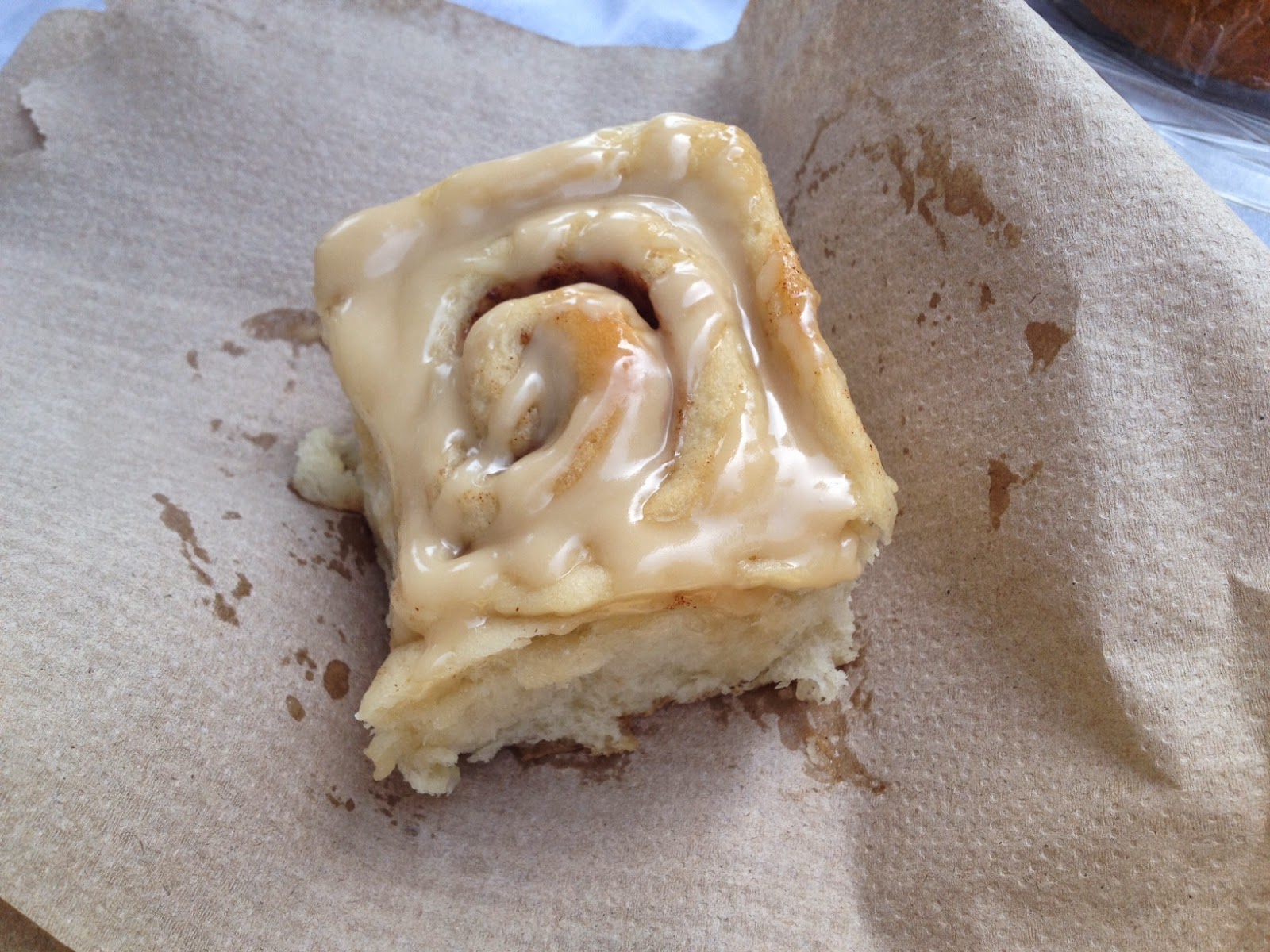 Later on, Nigel, who cooks at Imagine by day but also hosts random vegan food events around town, set up his own booth with lots of fresh, hot meals. Cassi ordered his Sesame Ginger Seitan with Brown Rice. I took one bite and had to get some to take home for dinner. Nigel makes the best homemade seitan. I failed to get a close-up of the dish, but here is Cassi eating it. 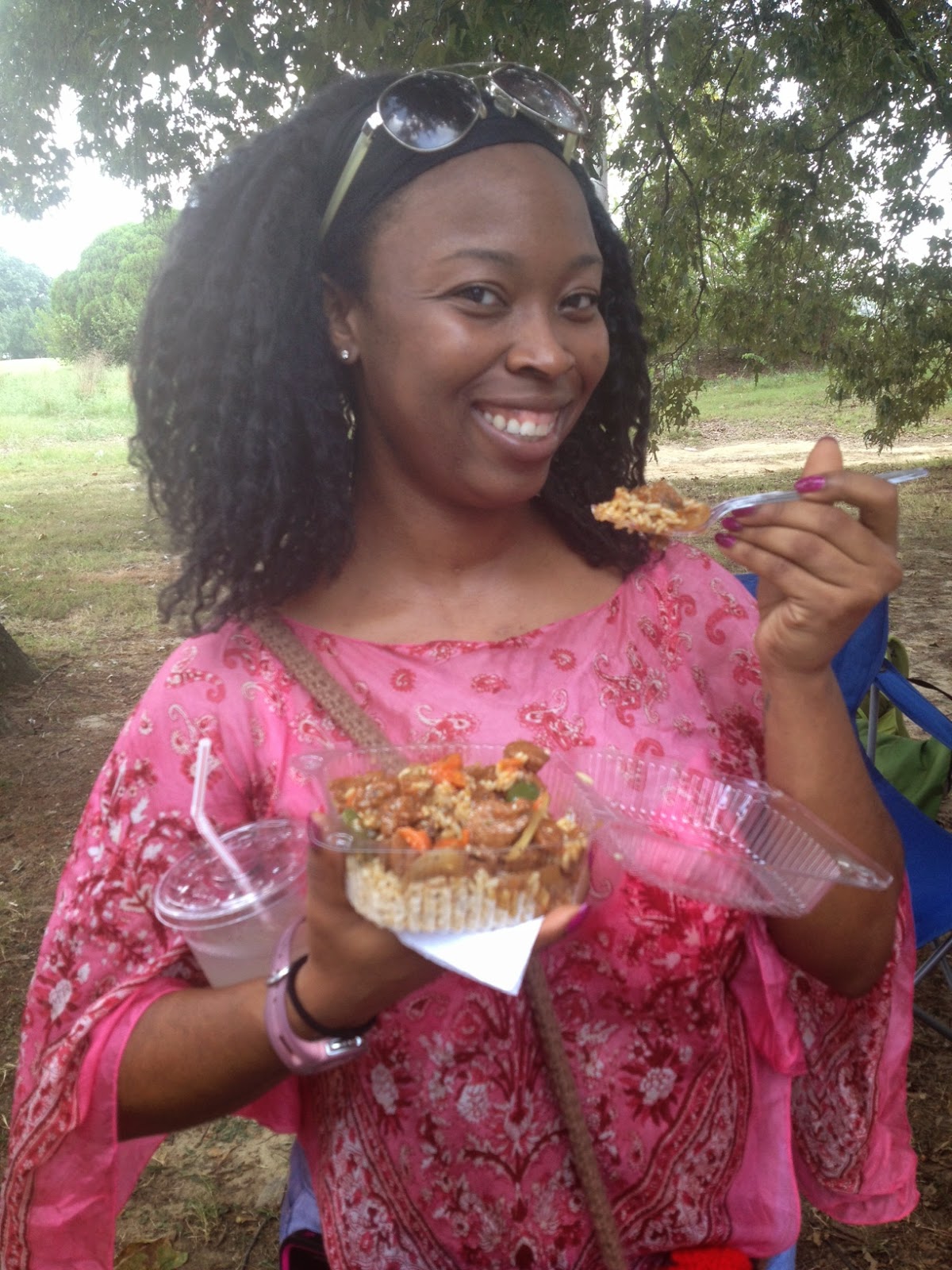 Besides food vendors, there were also booths peddling homemade jewelry, incense, supplements, herbs, watermelon juice, and more. My friends Thrasher and Emily were there selling Thrasher's homemade copper bracelets. Even though there were shade trees for the vendors to set up under, Thrasher chose this sunny spot because he needed to "charge his crystals." Yep, these are the kind of weirdo friends I have! 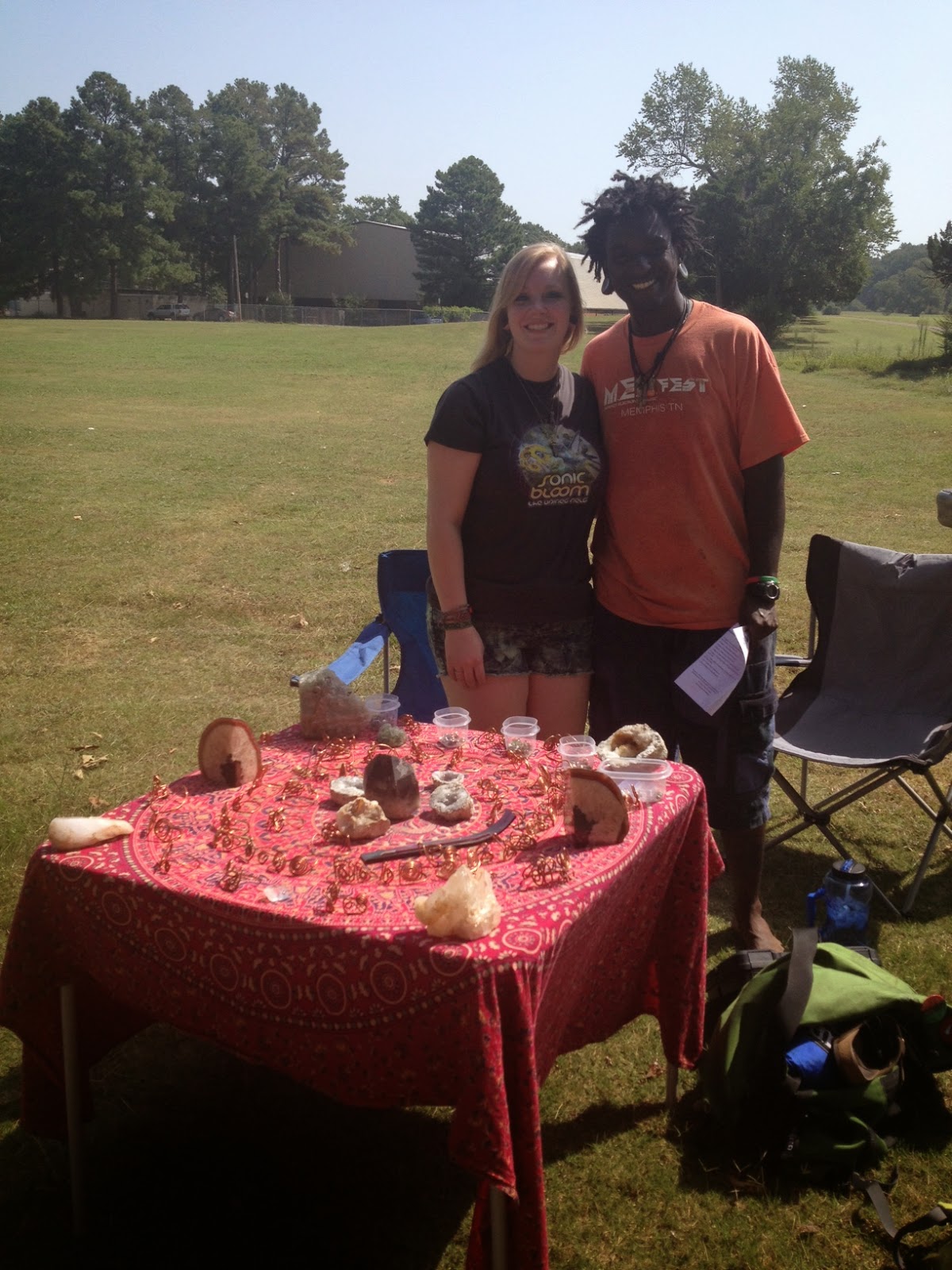 My herbalist friend Monica was there too, selling her homemade teas, tinctures, and syrups at her Little Red Oak Herbs booth. 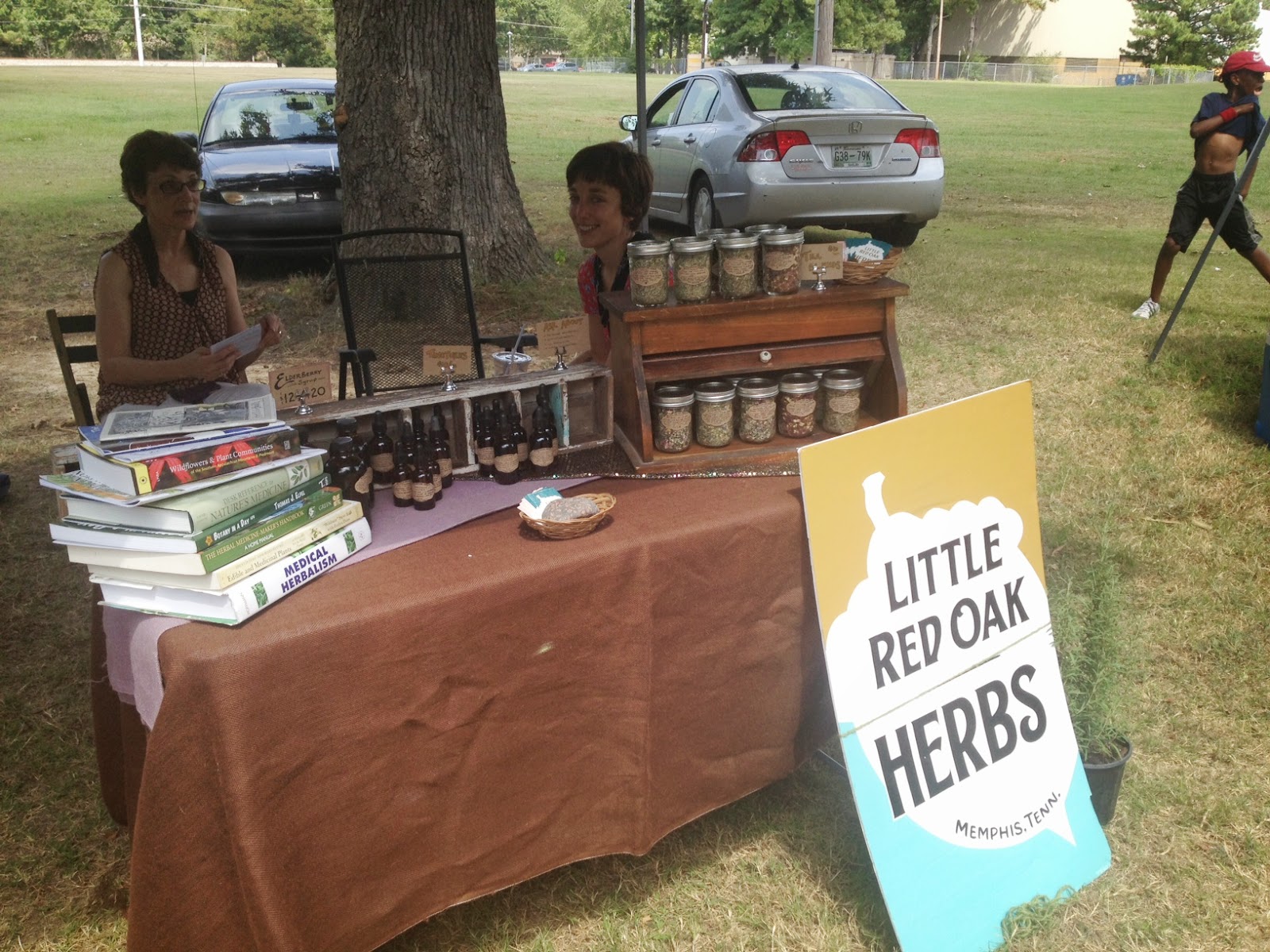 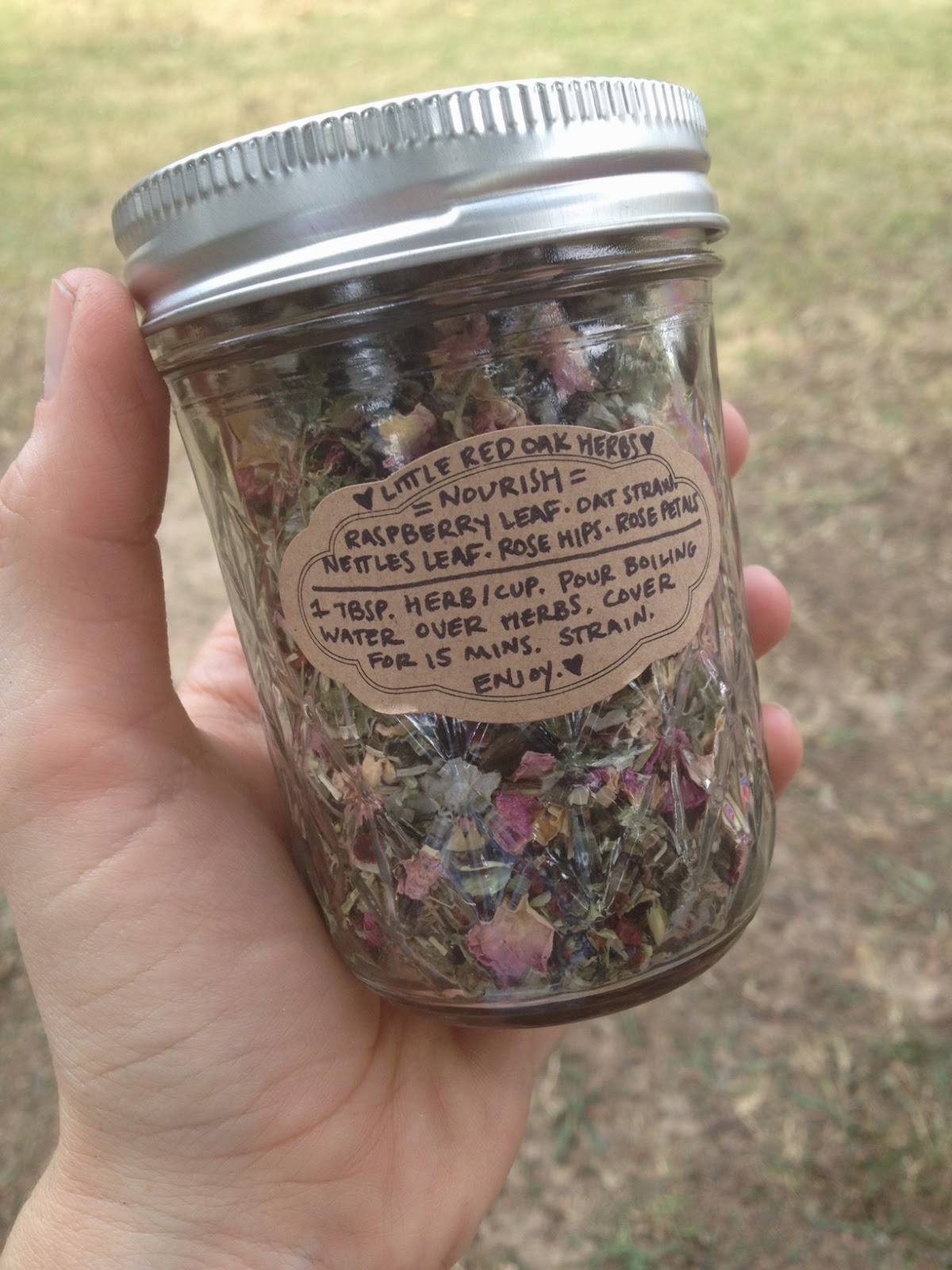 Since it was sooooo hot outside, by the end of the day, I was in serious need of hydration. Thankfully, the Deez Coconuts booth was selling Young Thai Coconut Water. 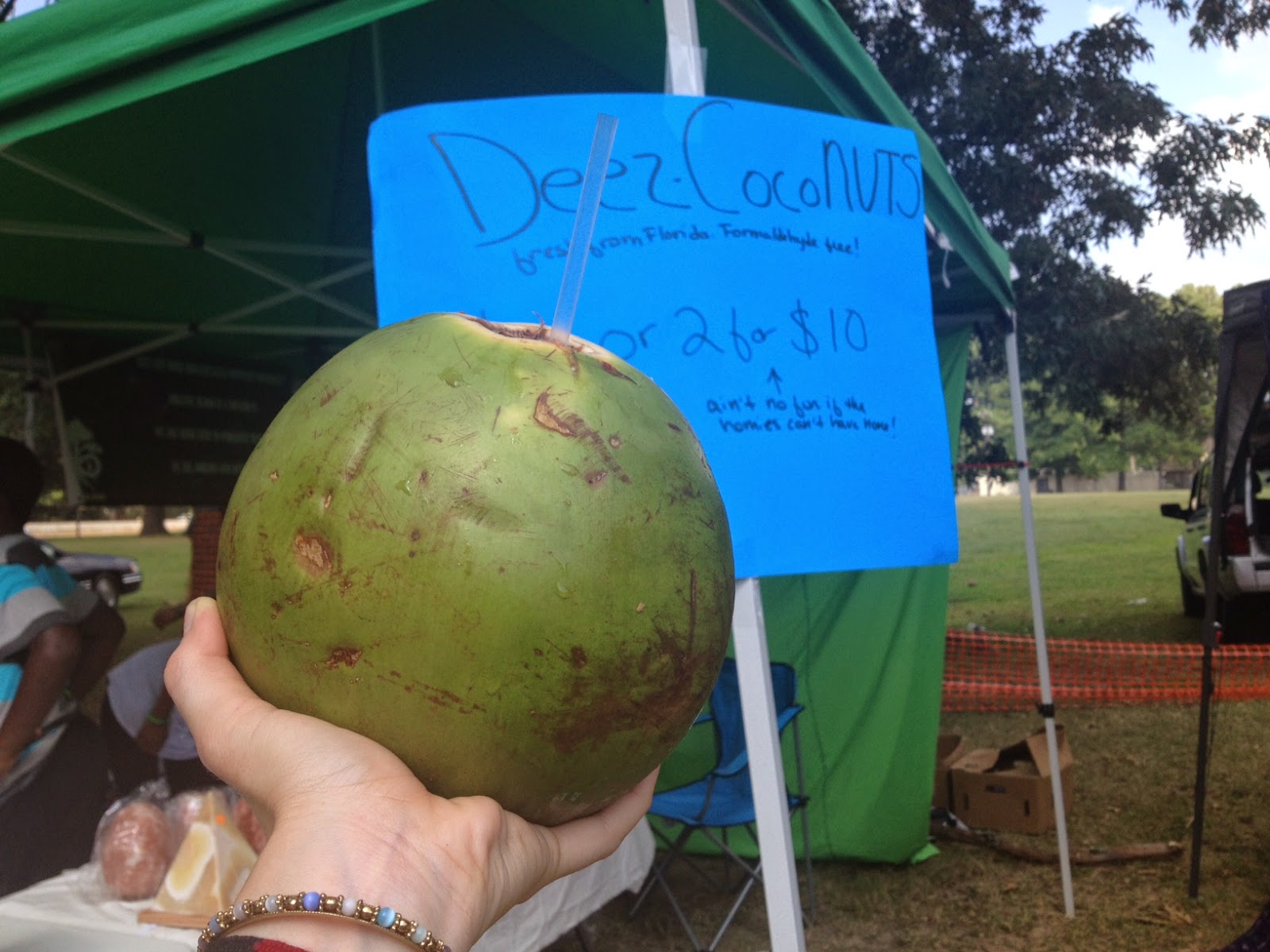 As usual, the fest was a great time. Thanks to Bastet and Katherine for organizing the whole thing again this year!! Those ladies rock. There were so many more great demos, speakers, and events that I just couldn't catch — yoga demos, meditation, juicing demos, Monica's herbology talk, Kristie from Imagine's food demo. But hopefully, I'll be able to see more next year!
Posted by Bianca at 10:16 PM

What a cool event. I wish we'd do something like this in Nashville, but I think our plant-based community is a little more disjointed.

I'd love to attend a fest like that. The weather may have been hot, but everyone looks so happy to be there anyway, and everyone is selling things that I'd love to try. Hahah

How fun!!! Congrats to you and Cassi on your cooking demos! It must be so fun to get out there and demo your amazing recipes. The pizza looks great but that cinnamon roll! Heaven!

It seemed like so much fun! How cool too that it was held outside in a park... despite the heat!

Why do I never hear about these things until AFTER they've happened???