Time again for a hodge-podge of random meals. Here goes.

I'll go ahead and get the obvious out of the way first. Because you know a few of these meals came from my favorite place, Imagine Vegan Cafe. This one here is pretty sweet. You see, they don't typically serve fried vegan fish there, but they special-ordered some Gardein Fishless Filets for a Fish Fry Friday! This plate has three filets, three hush puppies, tartar sauce, coleslaw, and fries, which Stephanie and I doused liberally with malt vinegar and ketchup, fish-and-chips style! Just like Captain D's! 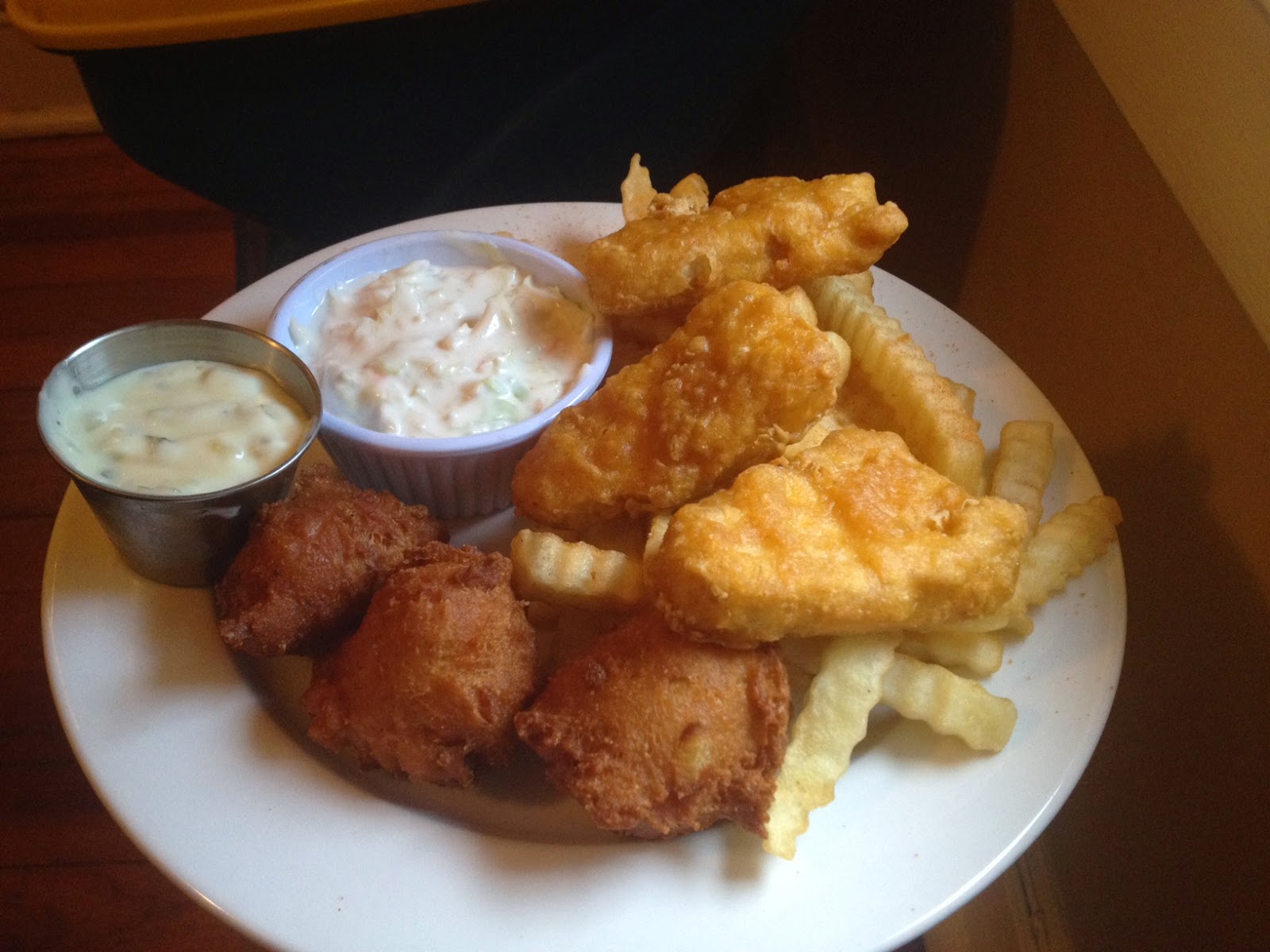 Every Sunday for brunch, Stephanie bakes a quiche for Imagine to sell by the slice. I got a to-go slice of this Broccoli Tofu Quiche. So good! 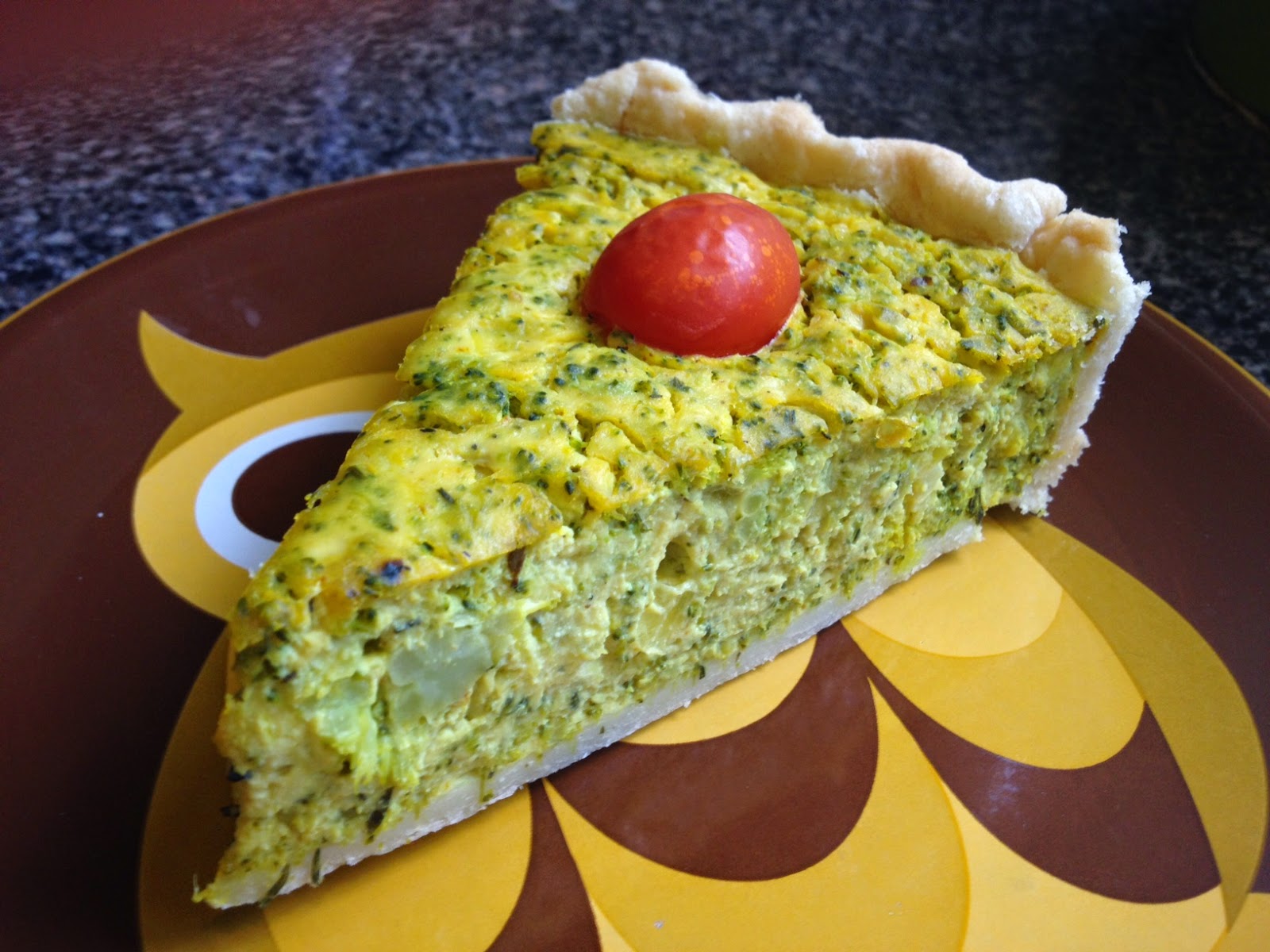 Tonight, I got takeout from Imagine — Fried "Chicken" Sandwich and Broccoli with Vegan Cheese Sauce (not pictured). The sandwich may look pretty simple, and that's the point — just vegan fried chicken, mayo, and pickles. It reminds me of those Chicken Littles KFC used to sell when I was a kid. We used to stop there after school every day and pick up Chicken Littles for snacks. This is like a slightly larger vegan version right down to the fluffy white bread. Imagine has wheat bread by request, but I love how their sandwiches come on white by default. Sometimes, you need the comfort of white bread. I never buy it at home, but it's SO GOOD when eaten at a restaurant. 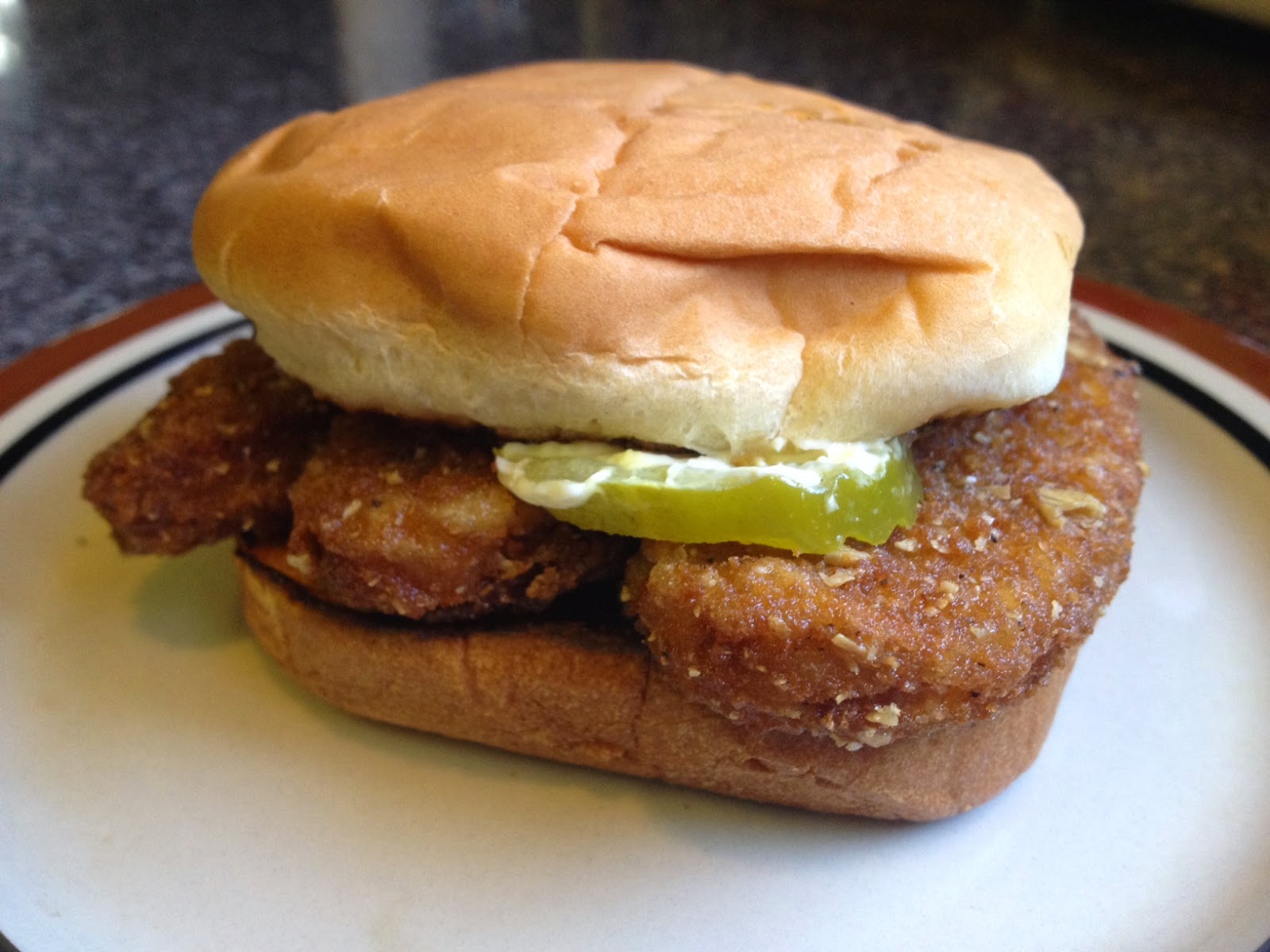 One day last week, I made the drive out to Bartlett, a Memphis suburb, for lunch at 2 Vegan Sistas. It's a totally vegan, mostly raw cafe, and their food is wonderful. But sadly, I rarely get out there because of the drive. I need to commit to eating there more and support other local vegan restaurants! Last week, I ordered the Raw Cashew Burger with cooked Collard Greens. The burger is seasoned quite well, and I love the ketchup, mustard, and onions. And the greens! Oh, the greens! They're delicious and loaded with tomatoes and mushrooms. 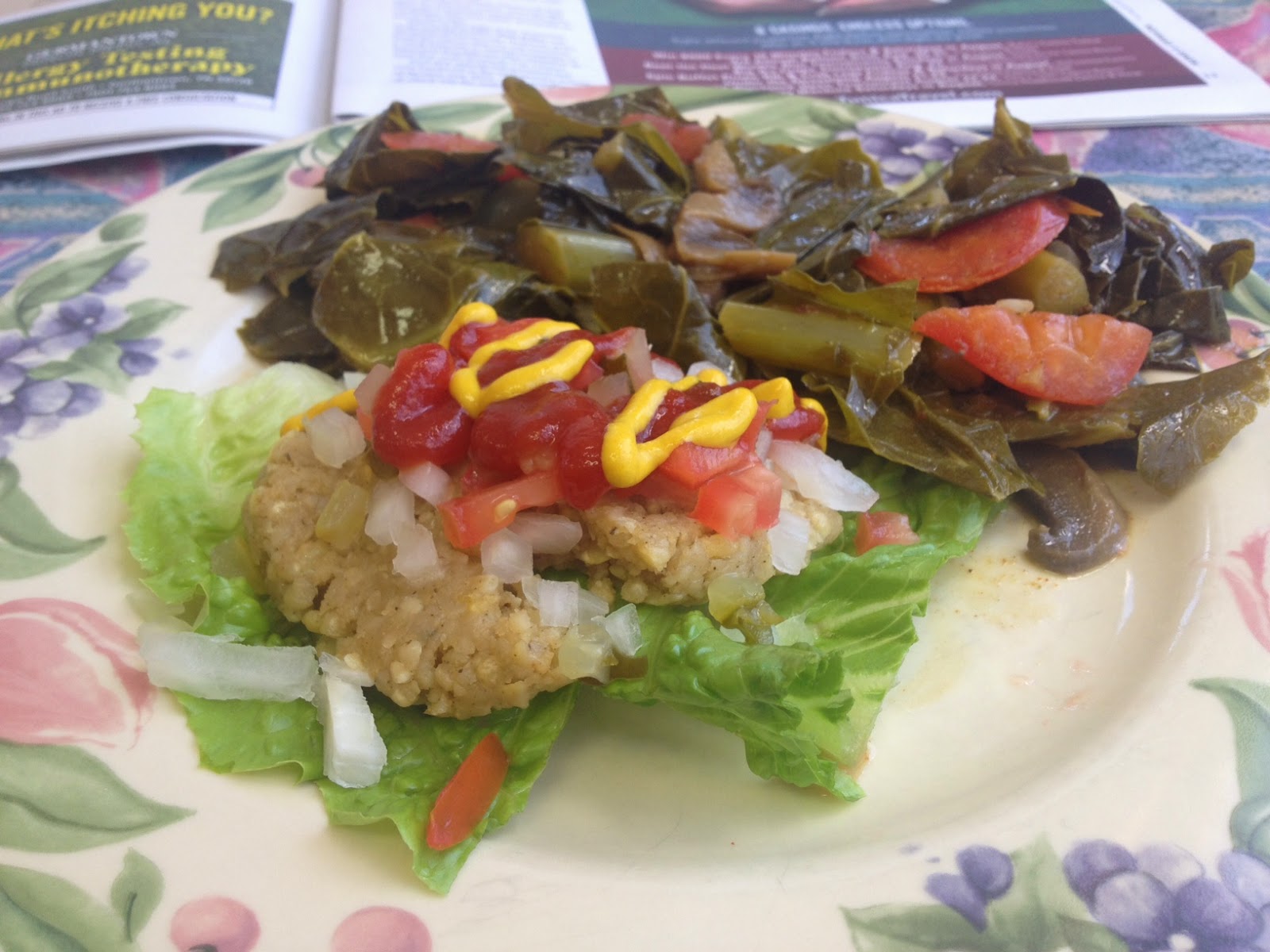 The burger comes raw-style on a lettuce leaf, but gluten-free bread is available by request. So of course, I requested it! This was heavily vegan-buttered, and that made it quite delectable. I'm not a huge fan of xgfx bread on its own, but it's perfect with a little added fat. I used this to sop up my greens juice. 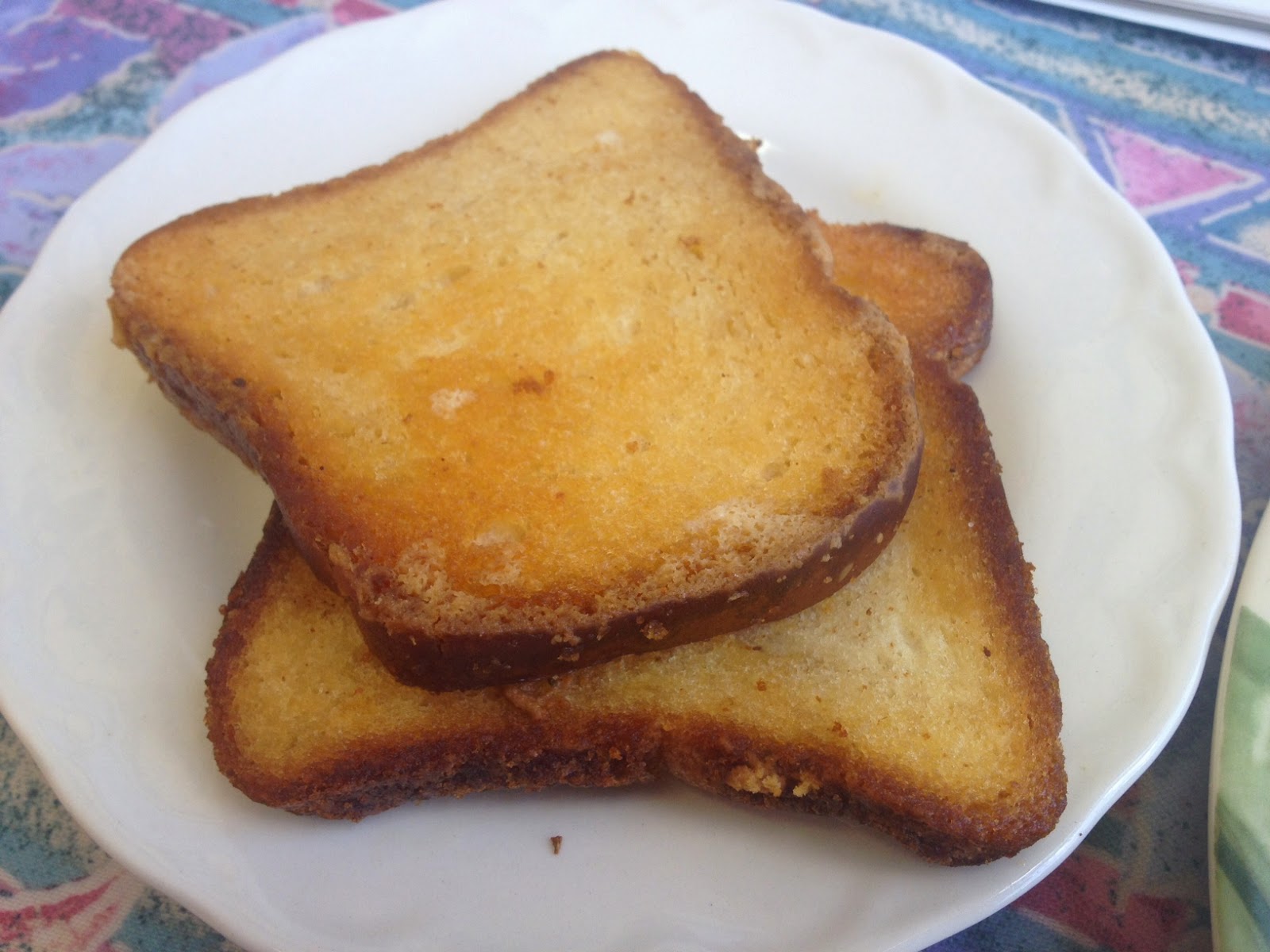 2 Vegan Sistas has excellent raw desserts! My fave has always been the Un-Peanut Butter Pie. It's more of a pudding with a cashew crust, and the nut butter is actually almond. And there's carob mixed in and strawberries and more cashew crust on top. It tastes like a raw version of a Reese's Peanut Butter Cup. It's much prettier when served at the restaurant, but I got mine to-go. 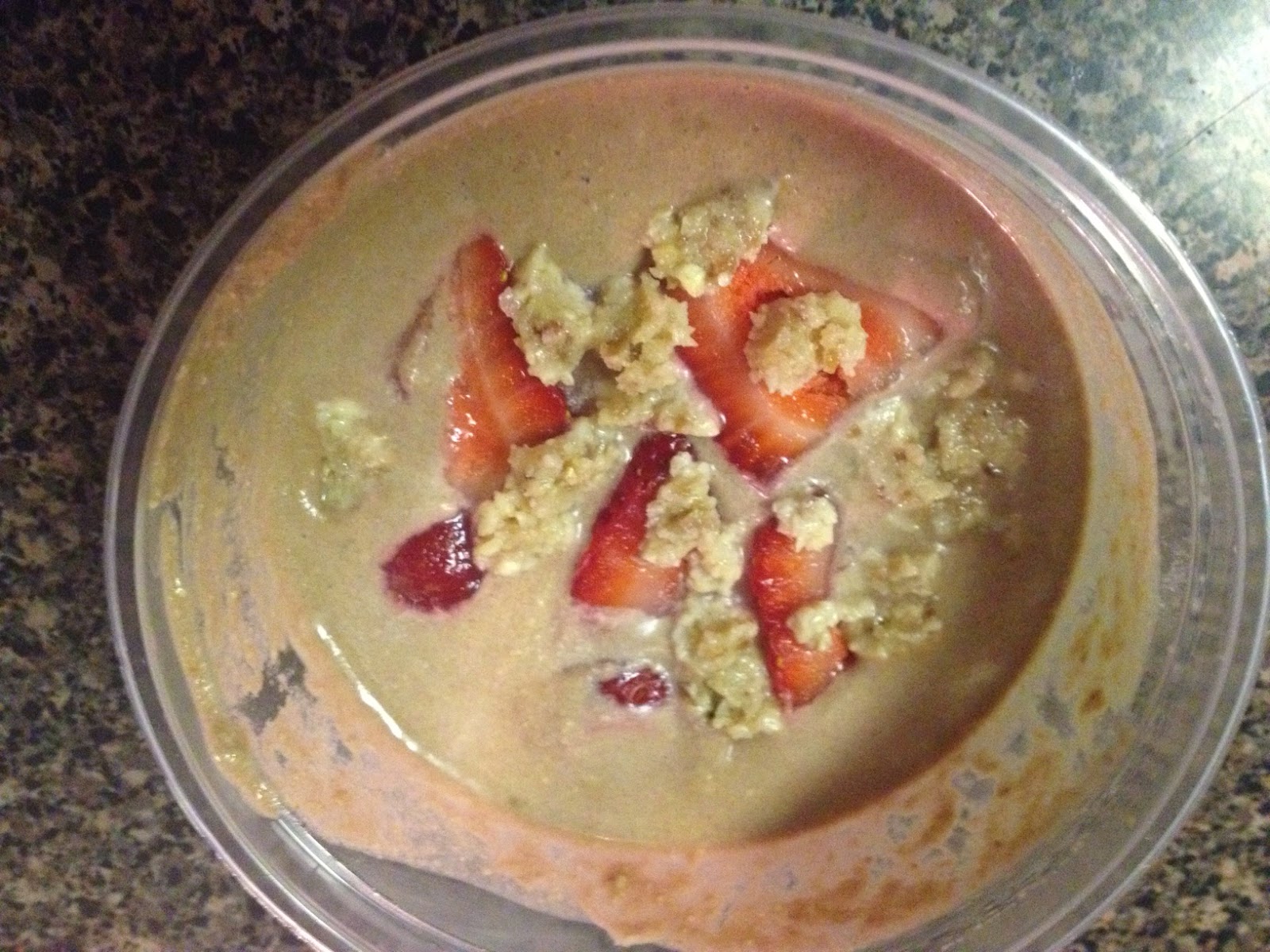 I also got an order of 2 Vegan Sistas Flax Crackers to-go. I have a dehydrator at home, but it's so much easier to buy the crackers already-made. These had sun-dried tomatoes in them and they were crispy. I ate them at home the next day with some Lilly's Roasted Red Pepper Hummus. 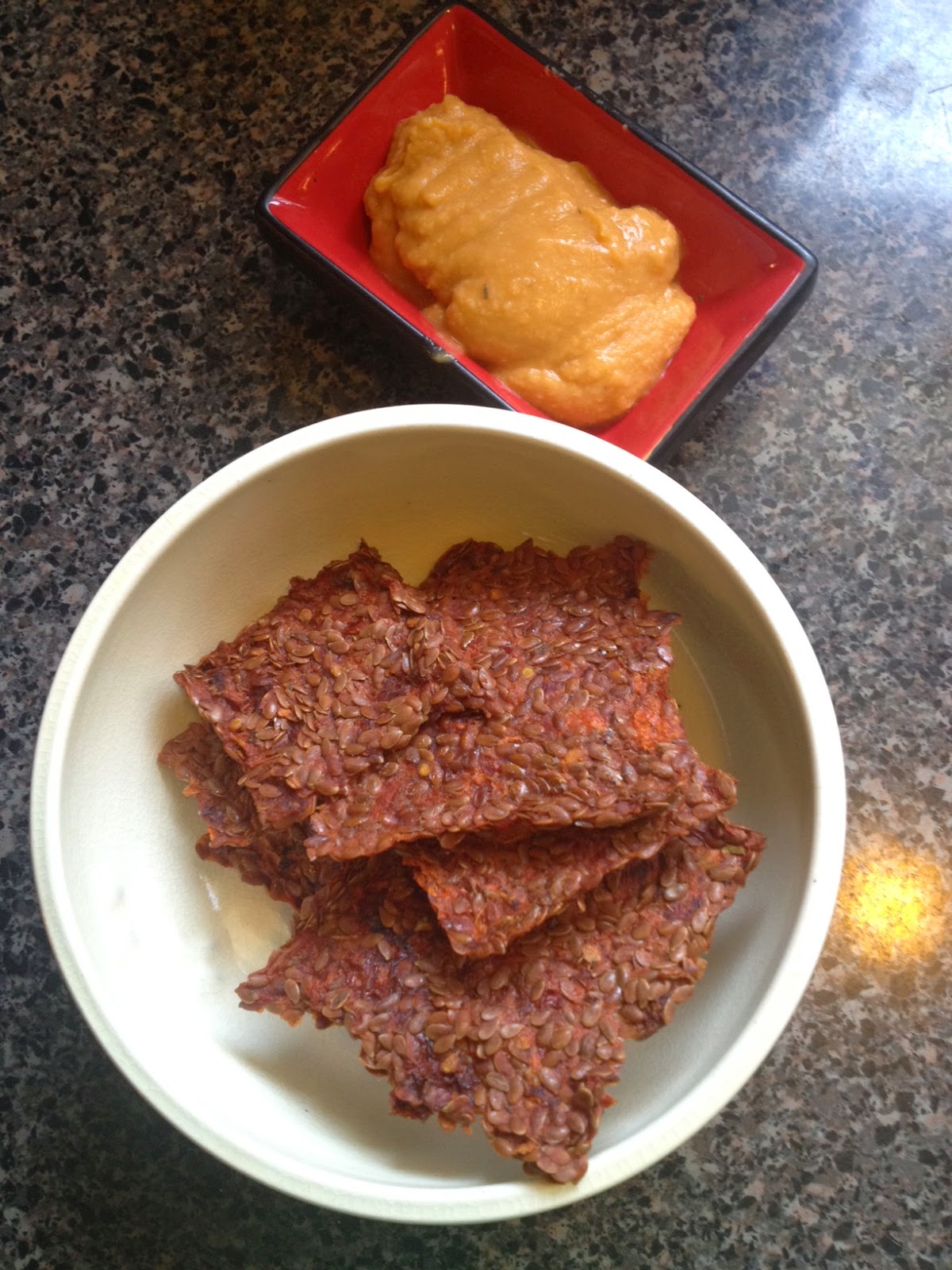 I also put that Lilly's hummus in some Veggie & Hummus Pita Sandwiches earlier this week — hummus, bell pepper, grated carrot, tomato, lettuce, and green olives. On the side, I had Earth Balance Vegan Cheddar Kettle Chips. 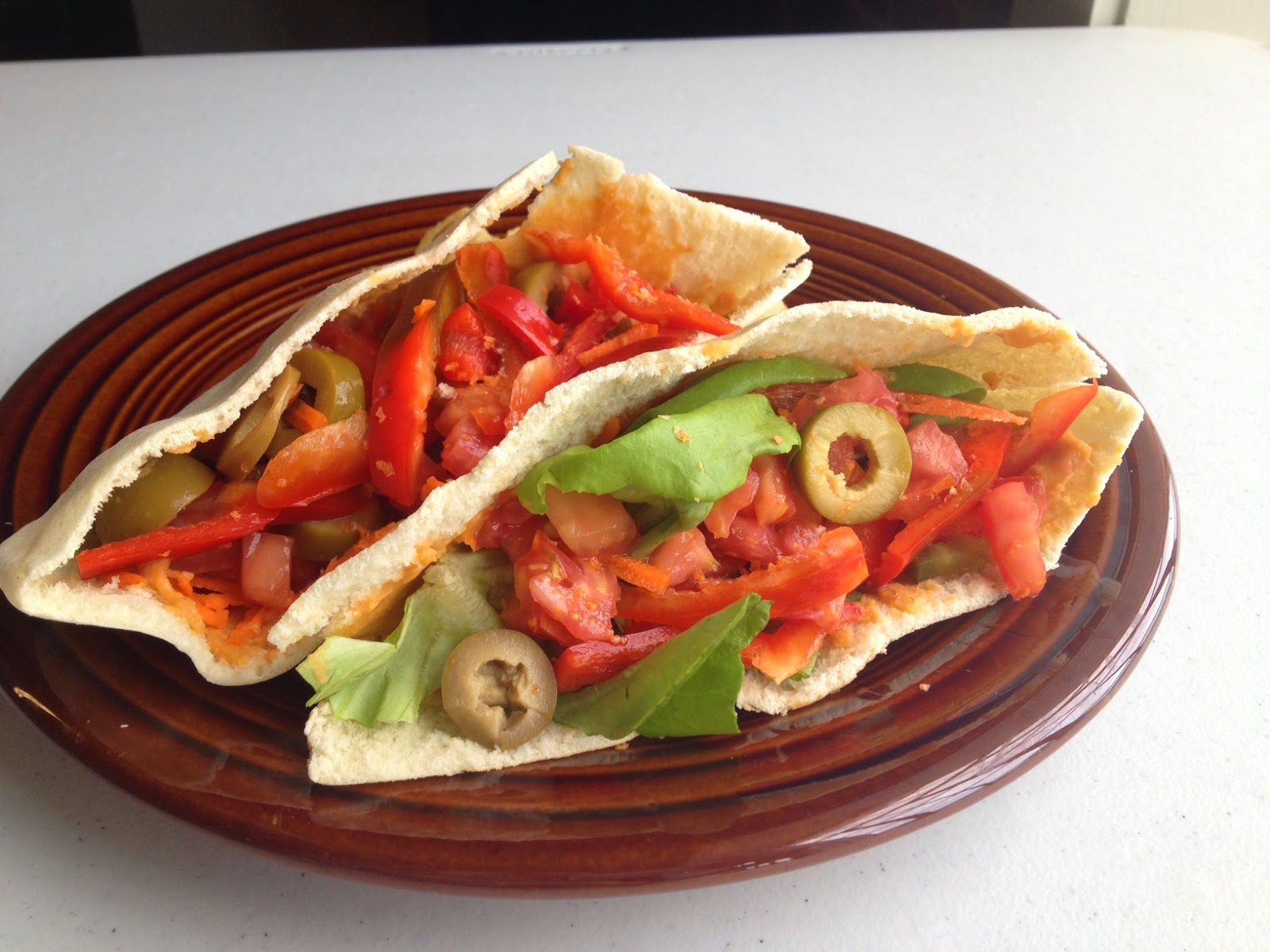 Been doing whole wheat bagels for breakfast. Here's one with avocado, black salt, and chili flakes and another with vegan cream cheese and onion & garlic pepper jelly. 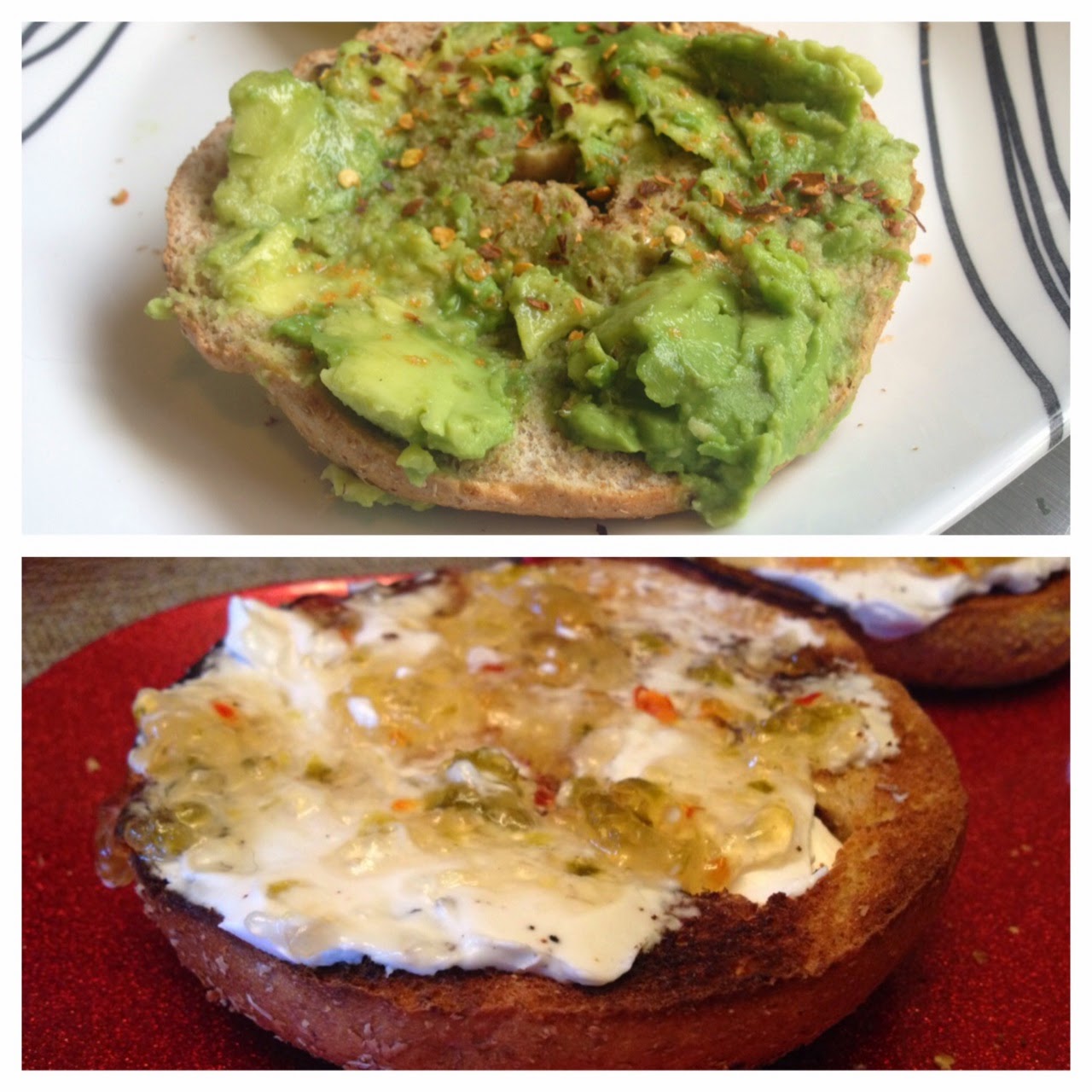 But out of all that deliciousness, nothing could top this bowl of awesomeness (well, maybe the fish fry)! I ordered several boxes of the new Earth Balance Vegan Mac & Cheese a few weeks back. And this was my first bowl — creamy, buttery, cheesy goodness, just like the boxed mac & cheese I lived off of in college. Ah!! 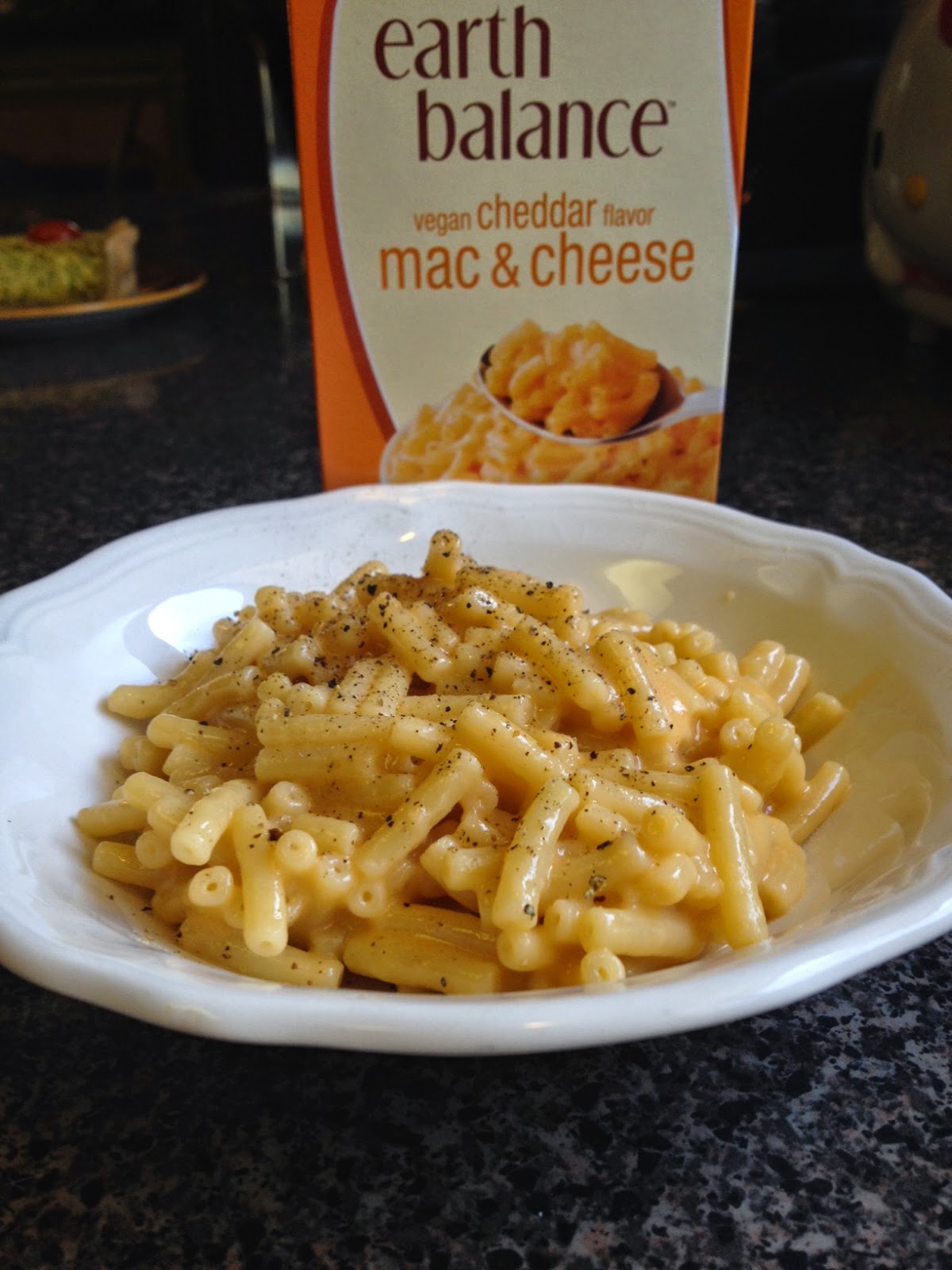 The food all looks amazing, especially the quiche and sandwich!

I wish I had eaten all that stuff, especially the fish fry plate and the EB mac and cheese. I'm really jealous here =)

[ Smiles ] Bianca, you always eat some of the most exciting vegan meals!

That first plate of food is like my dream meal! Yum!

The avocado and black salt on toast is fantastic. How did I not know about this?