Warning: This post contains graphic images of pizza and booze.

Tonight was Vegan Drinks night again! In honor of the new Teenage Mutant Ninja Turtles Movie (which I still haven't seen yet), I figured we should have a pizza party, so I scheduled us for Mellow Mushroom. Memphis has a number of places offering vegan cheese pizza, but Mellow Mushroom is the only one with a full bar. And they have plenty of room for crowds.

Most of us started with beers, because, well, pizza just isn't pizza without a cold beer. I started with Sweetwater 420 Pale Ale (on the right) and Greg got a Curious Traveler Shandy (on the left). I took one drink of his lemony summer beer and decided that's what I'd be ordering next. 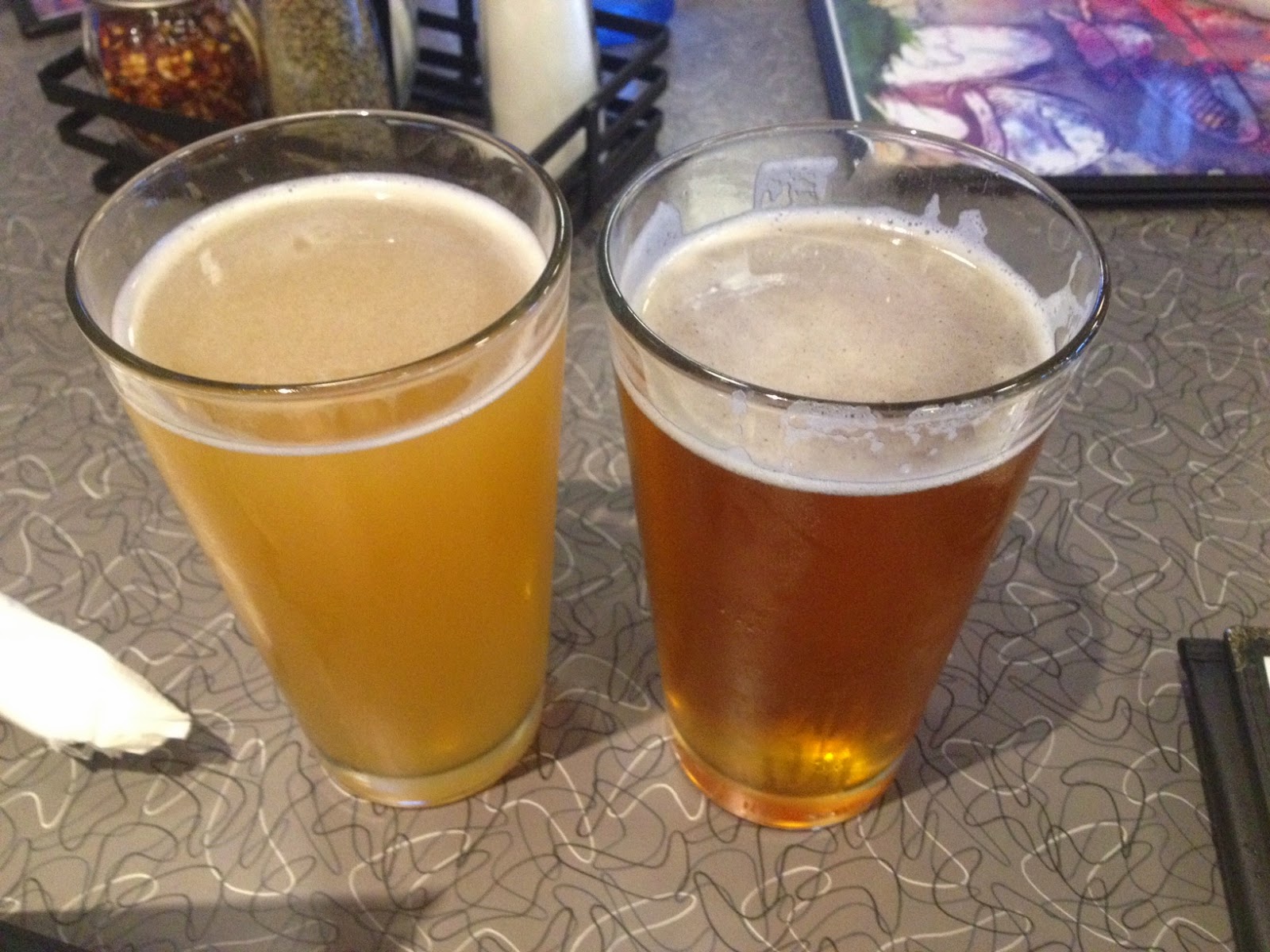 Of course, Autumn got a frilly cocktail, like she always does. This was the Elderflower Palmer (Maker's Mark bourbon, St. Germain, elderflower liqueur, sour mix, and a splash of tea). 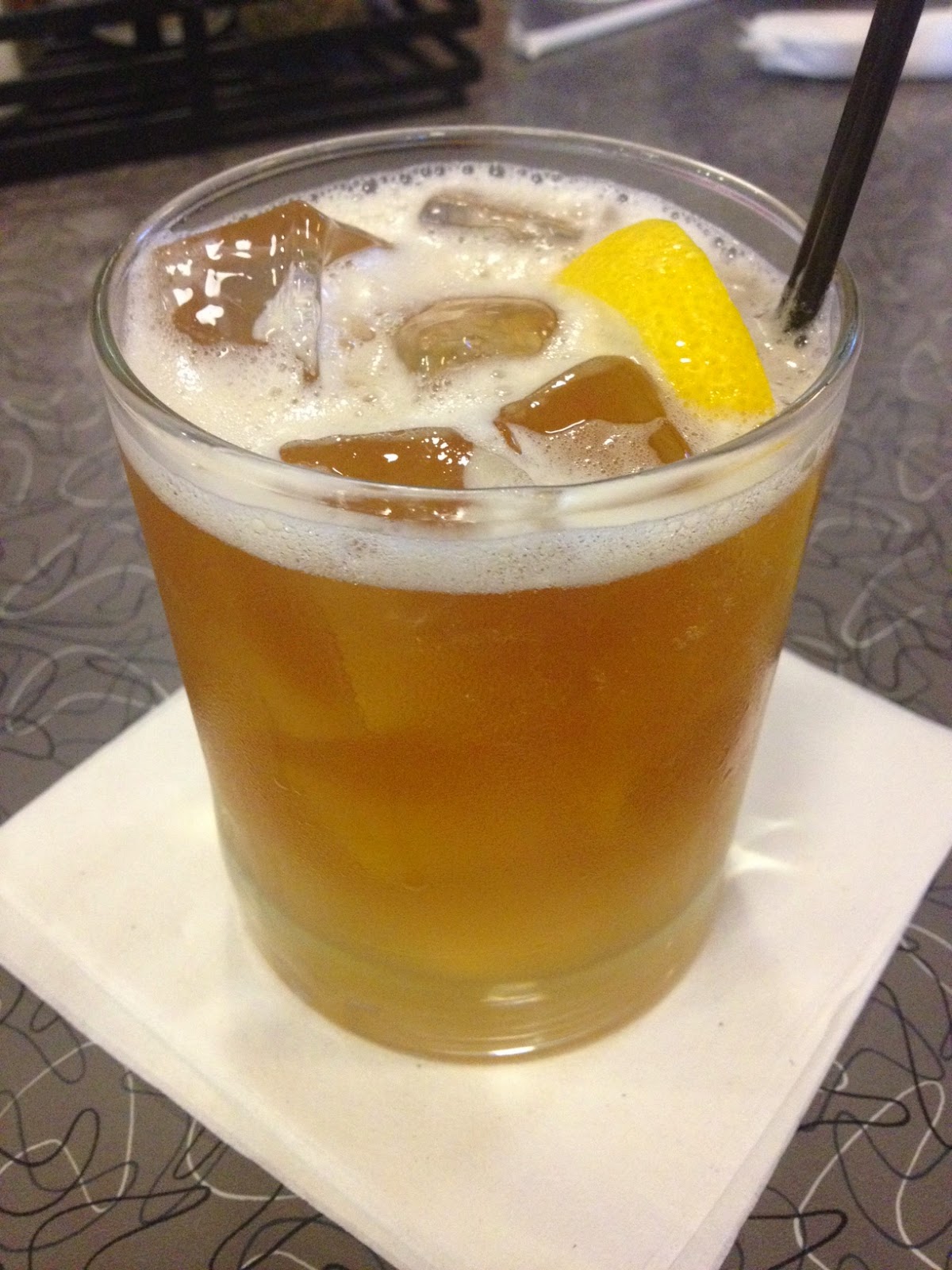 Pam got girly with a margarita. 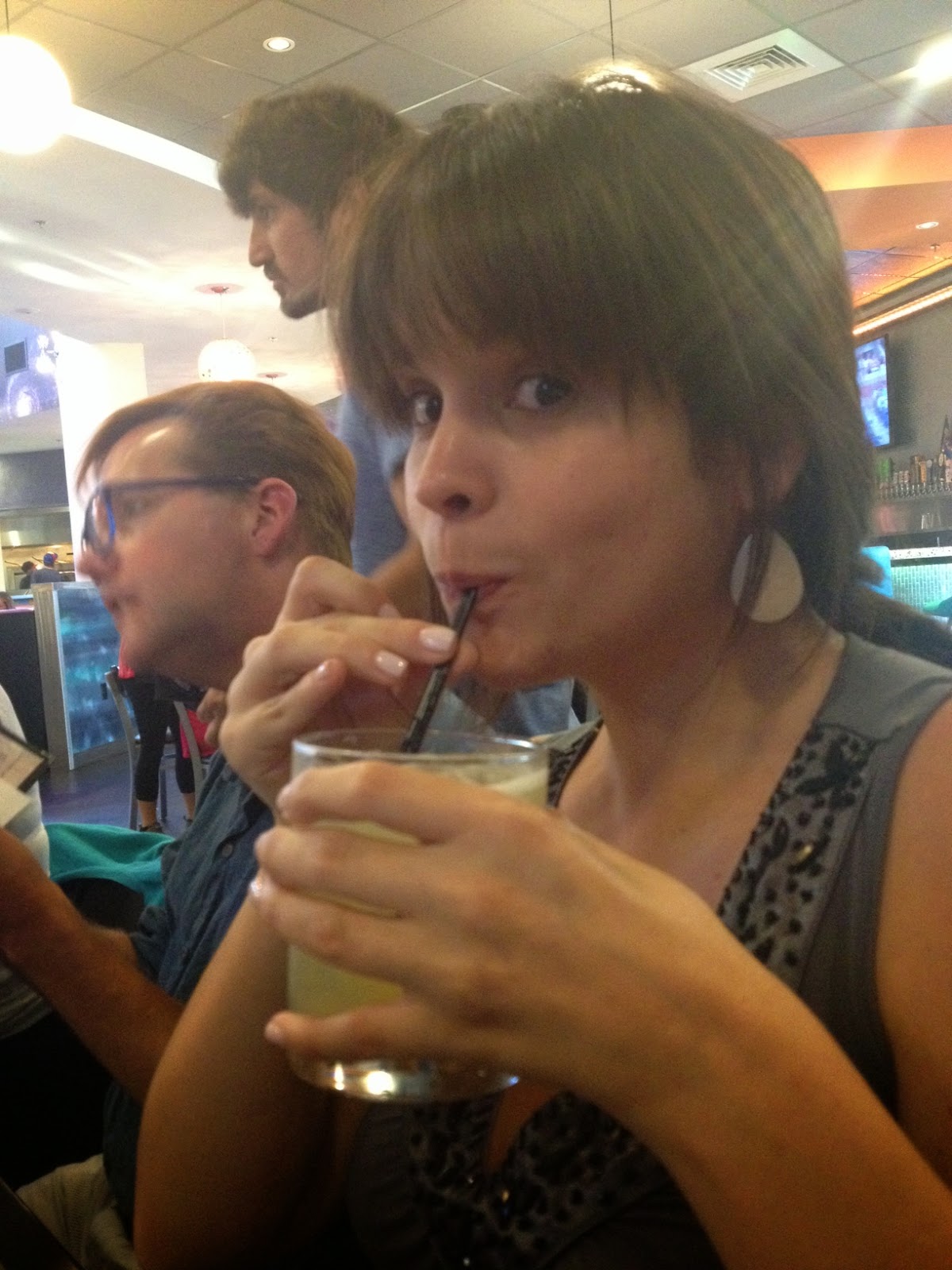 And then Greg and Stephanie had to have margaritas too. They opted for the Fiery Margaritas, served with a slice of jalapeno. The margs at Mellow Mushroom contain honey, and Greg never reads anything, so he accidentally got honey in his, but he drank it anyway. Stephanie, however, ordered hers with agave in place of honey, and she raved on and on about how good it was. 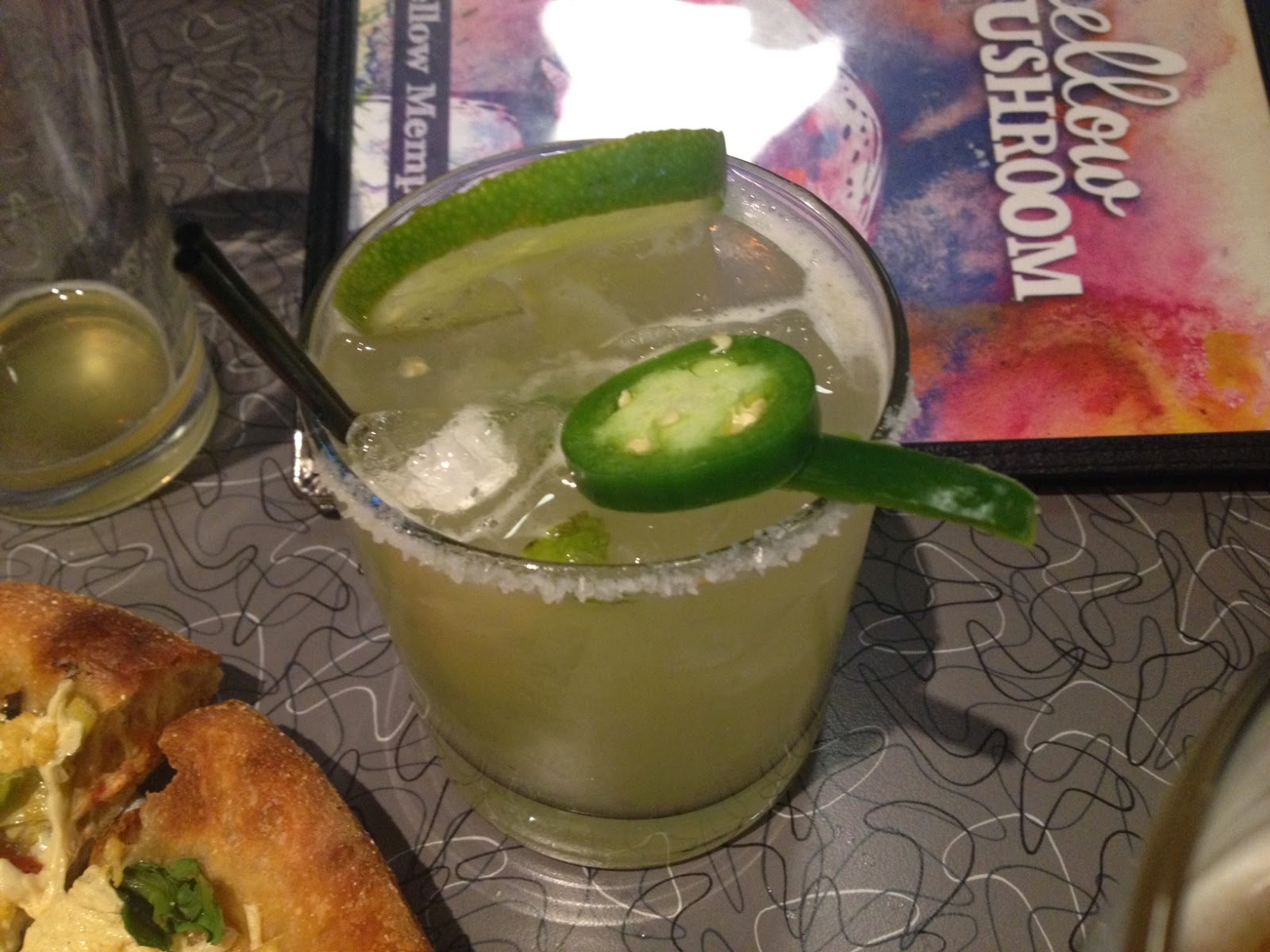 Susan ordered a Hendricks Refresher (Hendricks gin, cucumber, basil, agave sour, and maybe something else, but the notes I took in my phone didn't make sense). 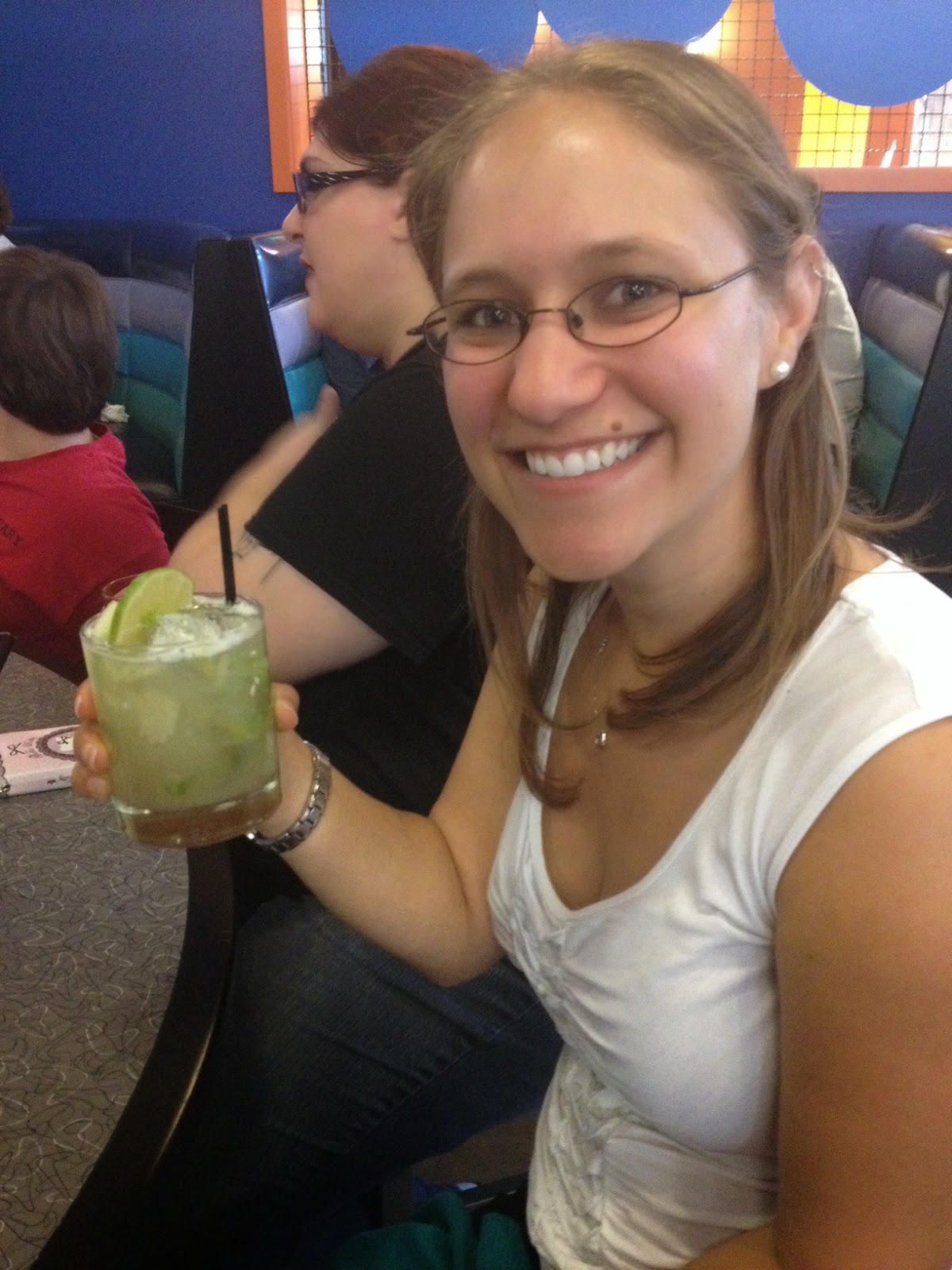 Autumn went in for seconds with a Frozen Margarita. As you can see, she really liked it. And there's Stephanie in the background, all photobomb-vogue-ing for the camera. 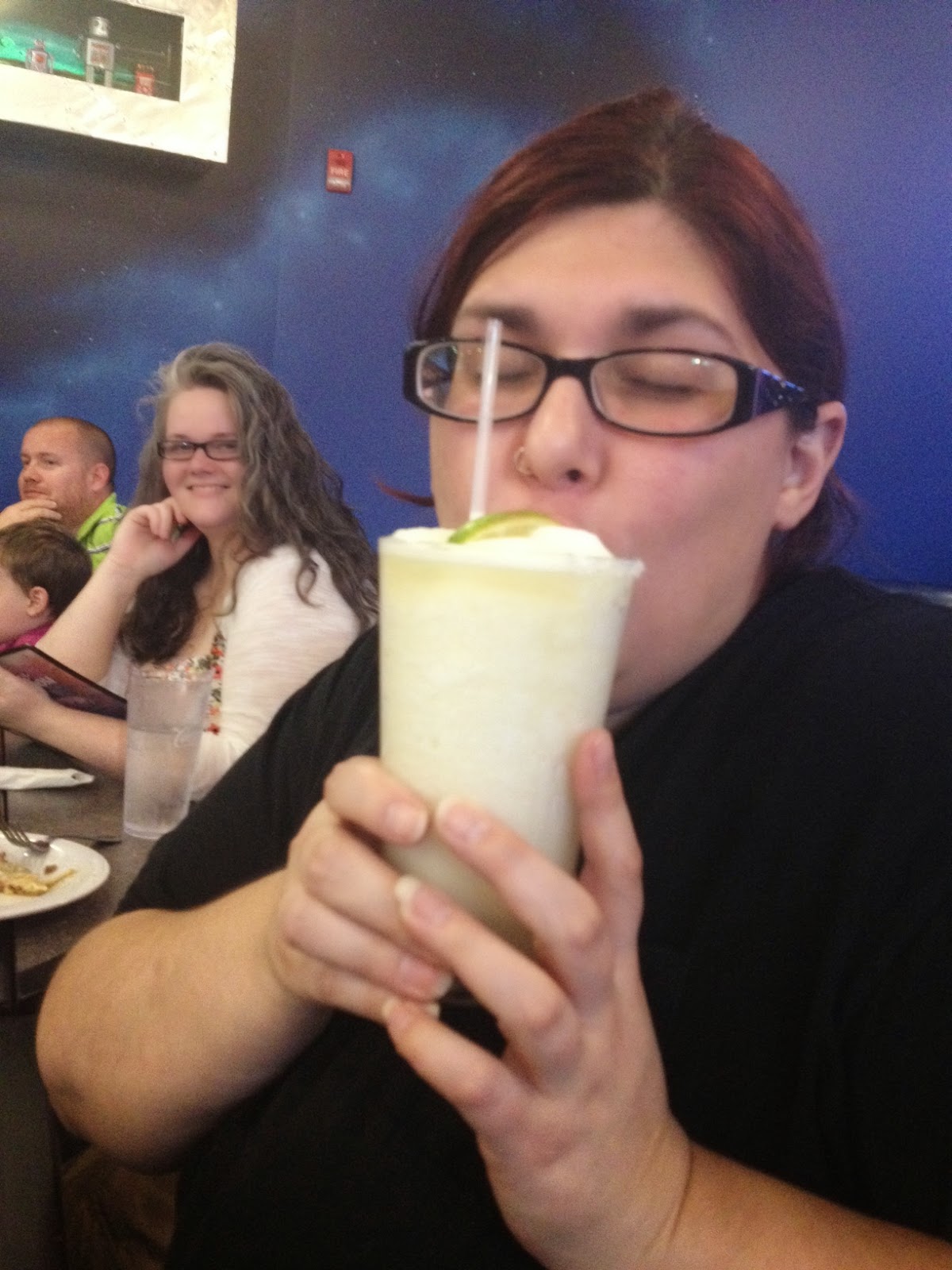 We had a nice turnout this month. Here's an action table shot. 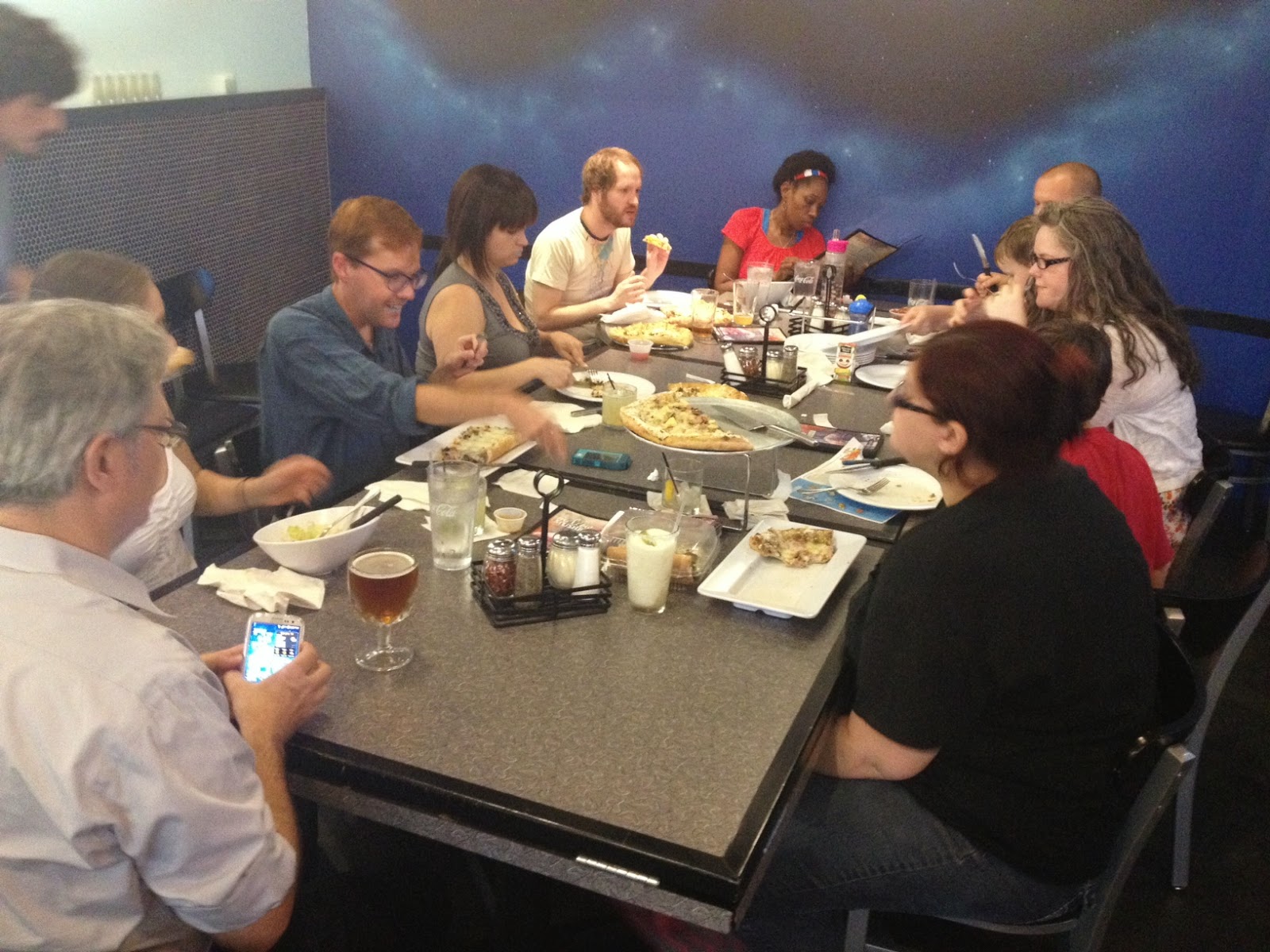 A couple people ordered salads and sandwiches, but sadly, I failed to photograph those meals. I did, however, take way too many pictures of pizza. I went with the Thai Dye Curry Pizza with curry tofu, cucumbers, tomato, basil, Daiya vegan cheese, and an olive oil/garlic base. I had the Thai chili sauce that typically comes drizzled over the pizza served on the side so my leftovers wouldn't get soggy. That's why you only see sauce on one slice. 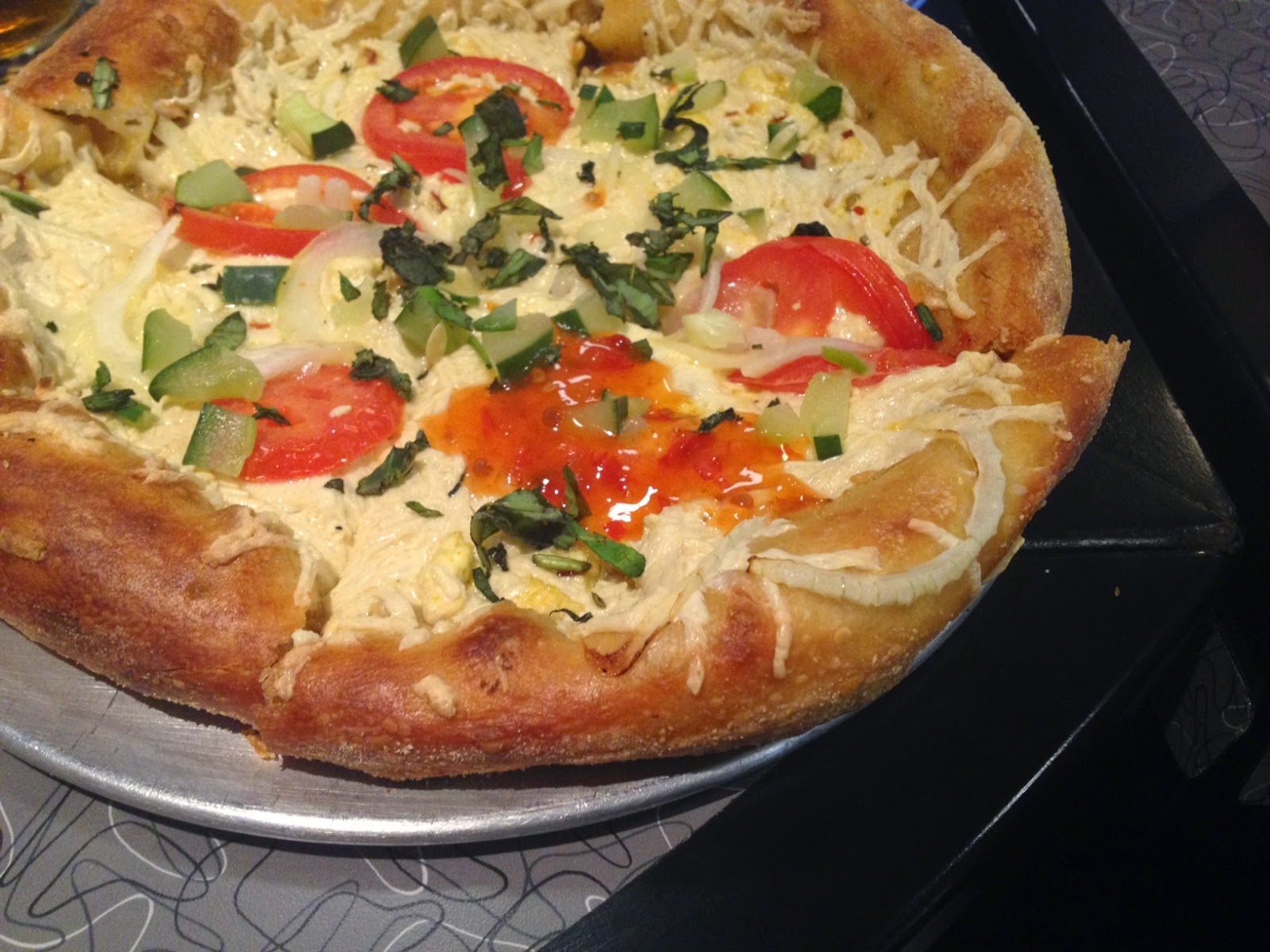 I had planned to eat the whole 10-inch pie tonight, but I only made it through two slices. Pizza and beer are filling. 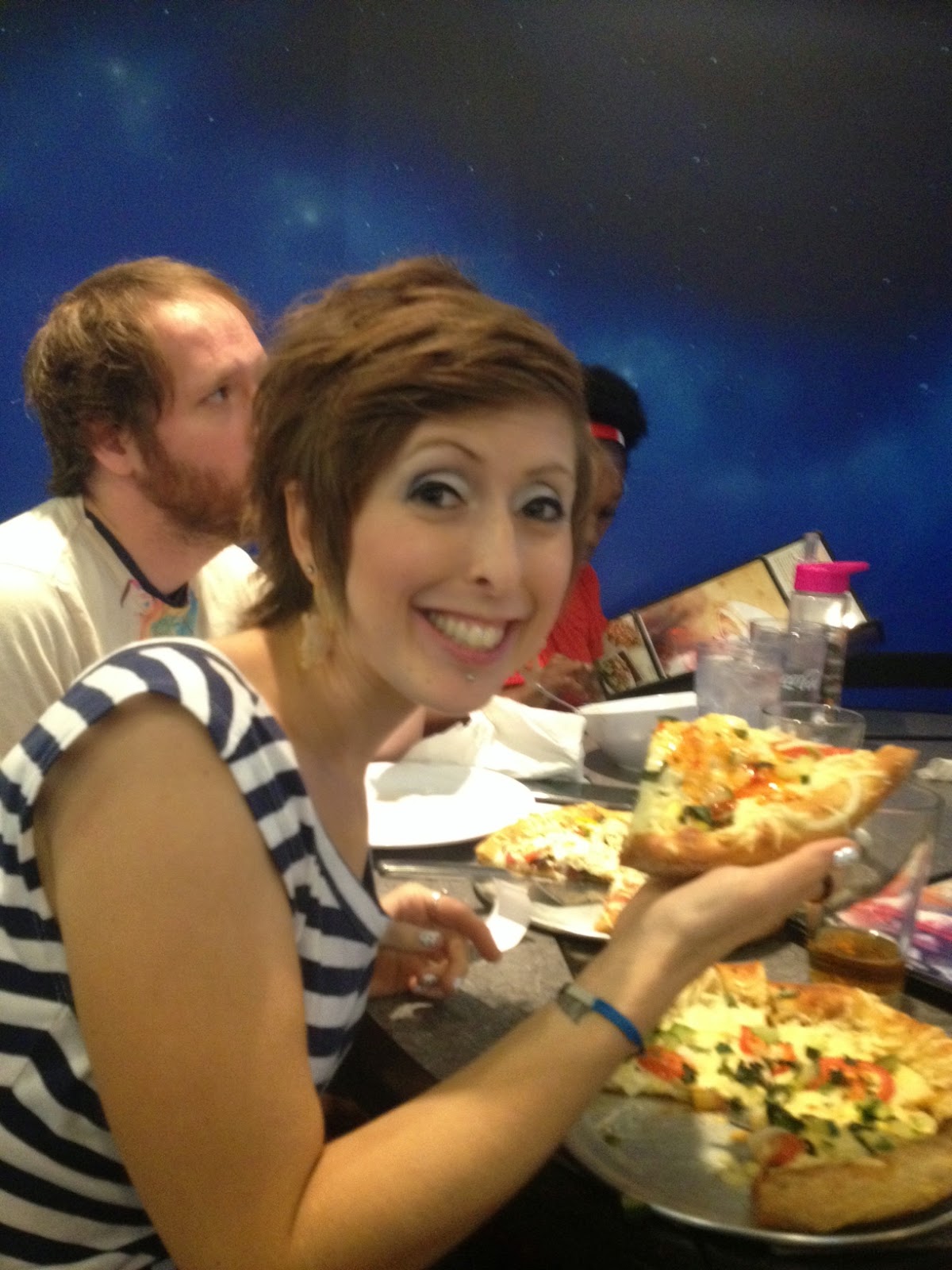 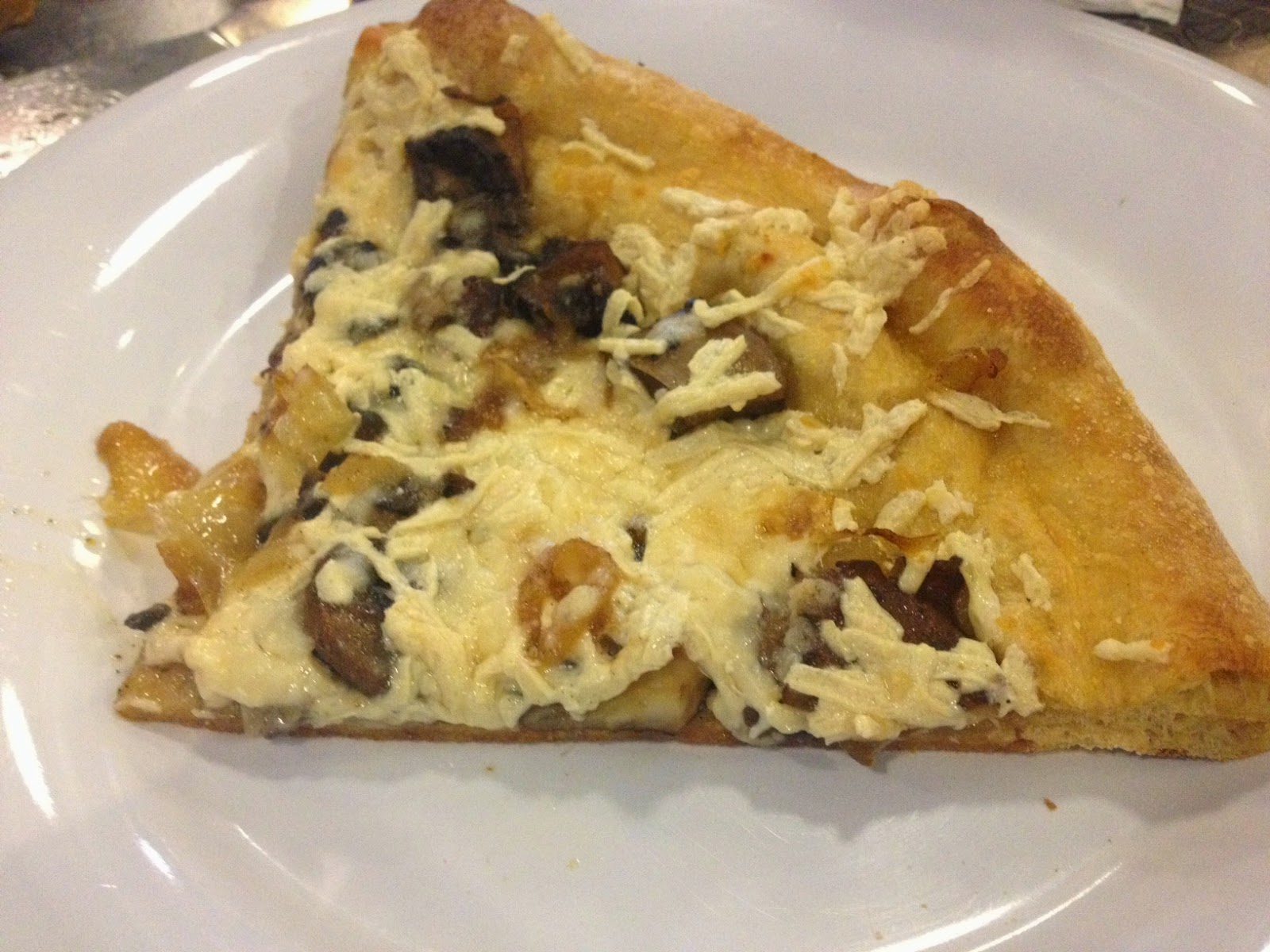 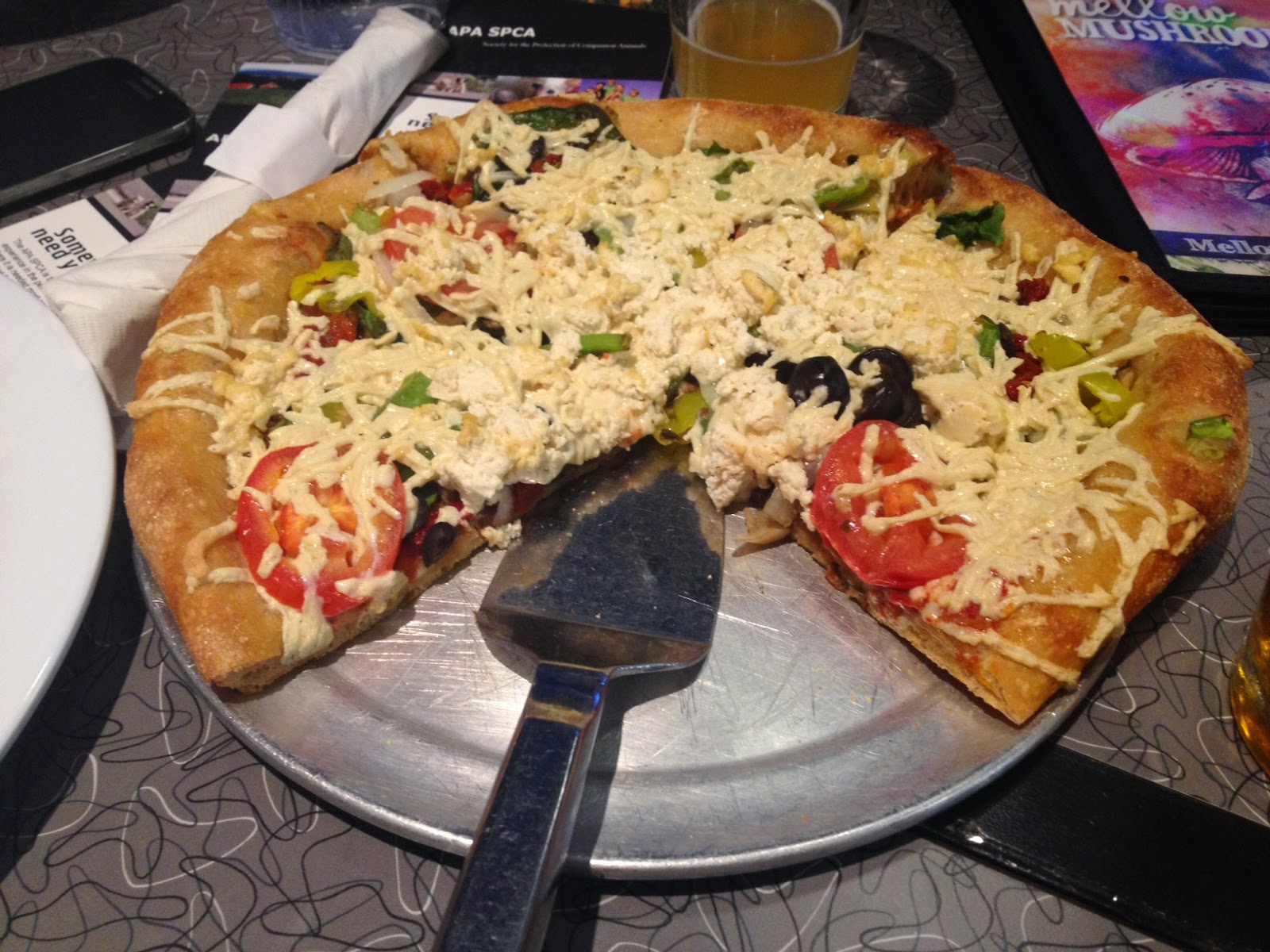 Stephanie was feeding her whole family, so she got a large pie. I'm not sure what all was on this, but definitely Daiya vegan cheese. Peter doesn't look too happy about pizza for some reason. 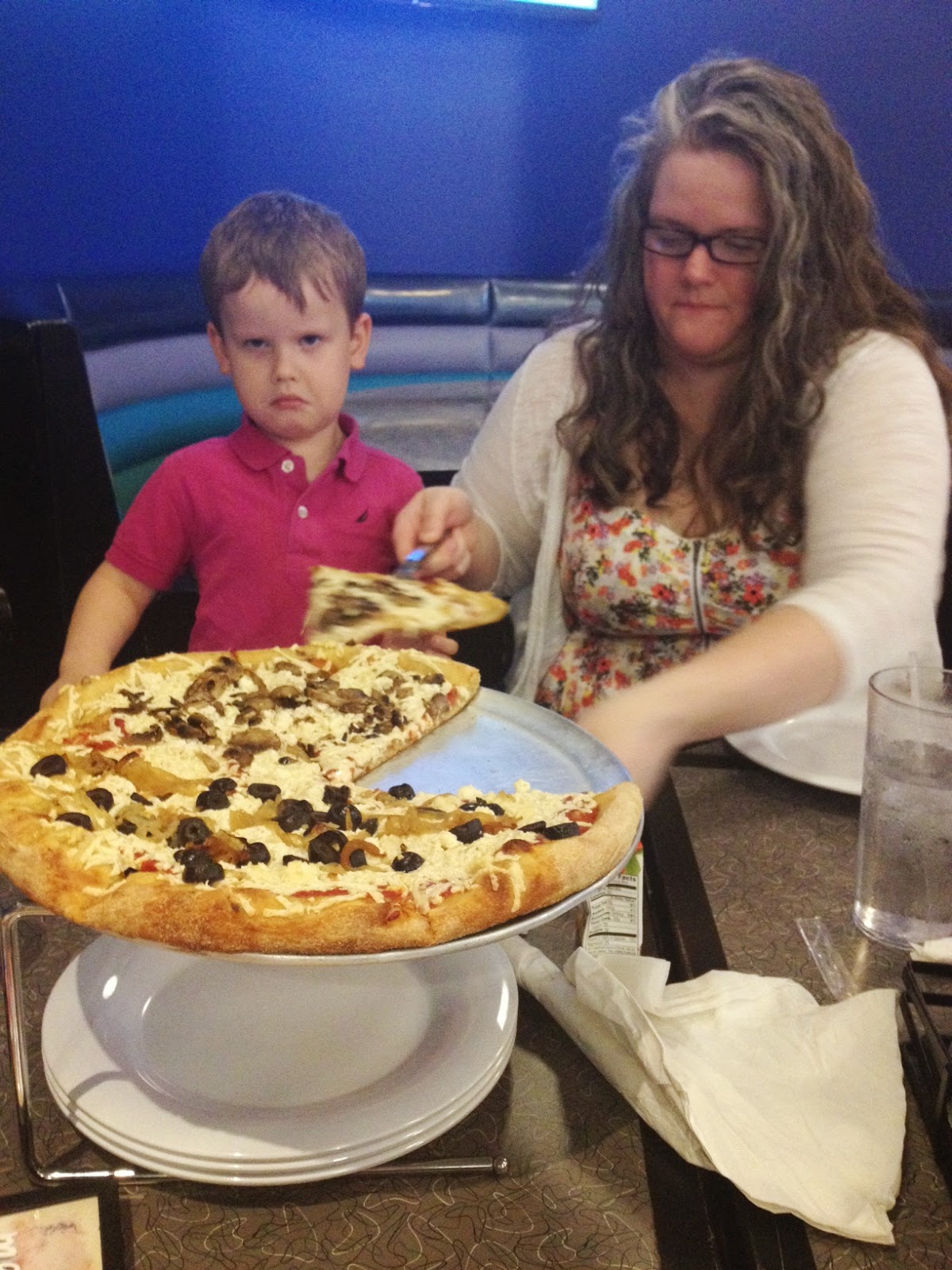 Mellow Mushroom has Tuesday night trivia, and just as we were wrapping up our meals, the trivia guy came by and asked if we wanted to play. Sure! Our team name was awesome — Better Late Than Pregnant. Ha! I'm horrible at trivia, and I was busy running my mouth and being chatty, so I didn't end up participating. But Ken, Susan, Nathan, and Pam were great at it. And guess what? They won! They got a $30 gift certificate! 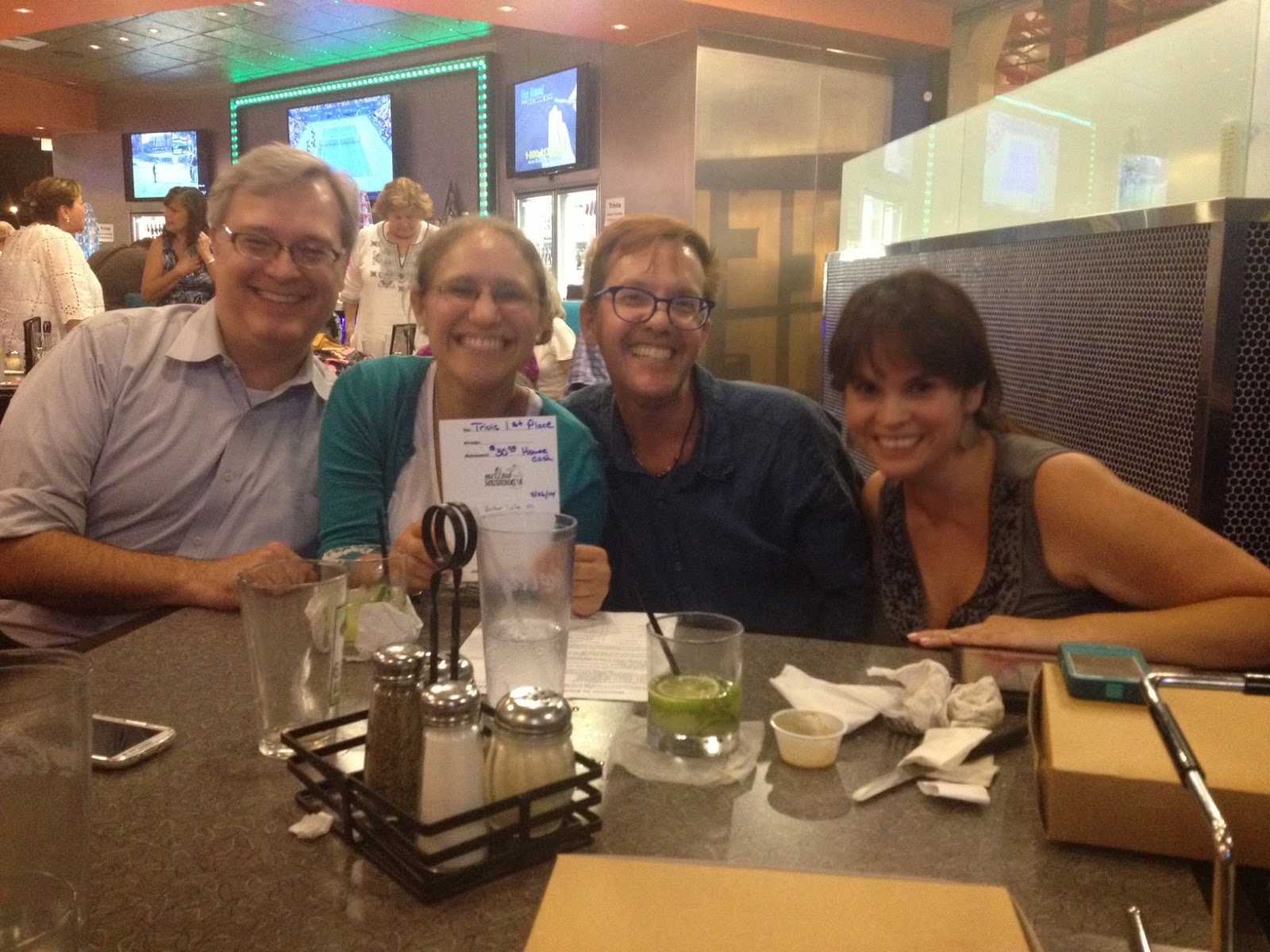 So much fun last night! We need to make this a weekly thing (pizza Tuesdays). And next time, I'm totes going for the Thai Pie, which sounded (and looked) amazing.

Nathan, I was thinking the same thing! That Thai pizza sounded/looked sooooo yummy!! Can't wait for next Tuesday!