There are few things I'll drive out east for. I'm a Midtowner with a fair amount of Midtown pretentiousness. If you're not from around here, that just means I live in a hip, kinda edgy neighborhood in the city core, and I avoid the suburbs like the plague. If it involves the interstate, it's probably not worth it. But sadly, the best Indian food in Memphis is way, way out in the 'burbs. Midtown has a few Indian restaurants, but they're all North Indian places. And I'm into the fried dosa goodness of South Indian cuisine.

So I'll drive 20 minutes or more to get decent South Indian food. And last week, I discovered perhaps the most authentic, most delicious South Indian restaurant in town. It's called Curry Bowl, and they offer a large number of vegetarian dishes on their dinner menu and a veg-heavy lunch buffet. I met my friend Leslie there on Friday for lunch, and we both polished off two plates from the buffet. 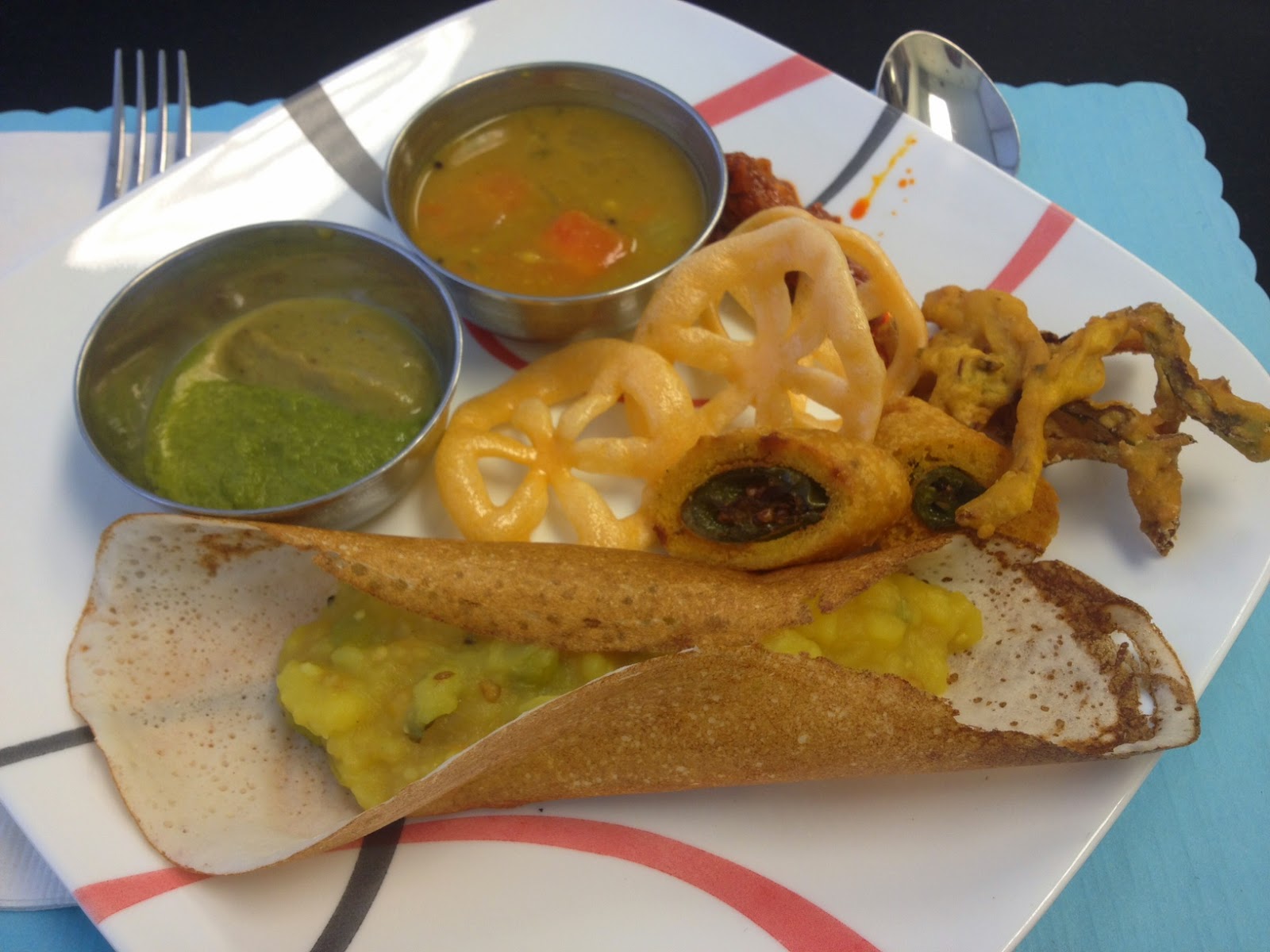 And here's my second - Gobi Manchurian (cauliflower fritters), Lentil Dal, Basmati Rice, Vegetable Biryani (veggie rice), Eggplant Masala Curry, Tamarind Chutney, and Coconut Chutney. Also, I think those fried balls were Vada Doughnut Holes, but I could be wrong. And I also had one of those hamburger bun/chickpea half-sandwiches commonly eaten as chaat (street food snacks), but I don't know what that's called. 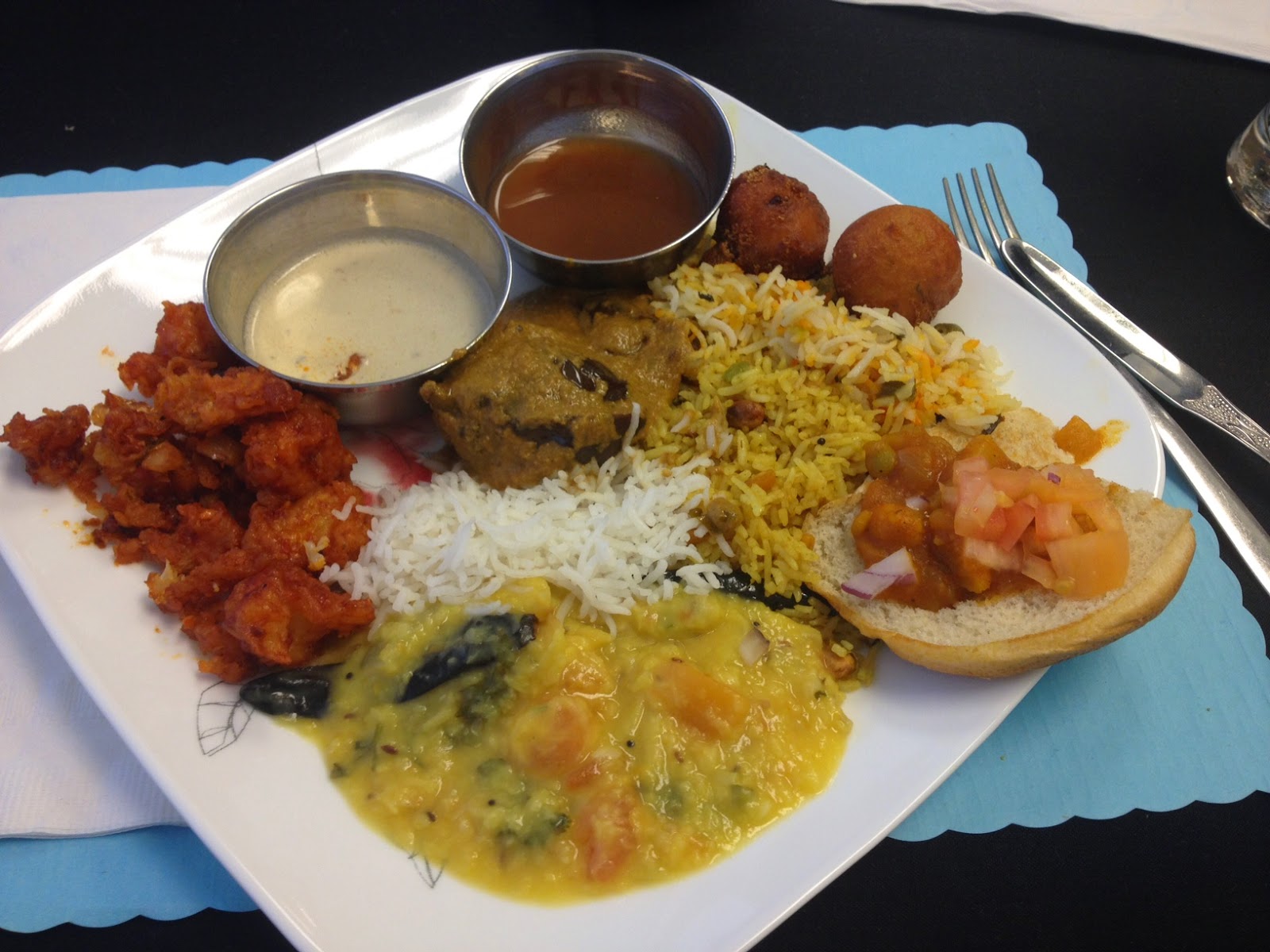 A note on my dining philosophy: I don't ask lots of questions when I eat out, especially in places where there's already a language barrier. So I use my eyes to try and determine what's vegan and what isn't. Sometimes, I'm wrong. I'm not sure if ghee (clarified butter) was used in any of the dishes I ate on Friday. I hope not, but you never can tell. Anyway, just putting that out there as a disclaimer. Should you choose to dine at Curry Bowl, keep that in mind.

By the way, I'm hosting a class at Vida Vegan Con 2015 in Austin on the ethics of vegan dining and drinking. And we'll be delving into these very issues!

Thanks for being upfront about your dining philosophy. I've been eating that way at restaurants since becoming vegan, and I always felt like I was doing something wrong and felt bad about it. I don't want eating out to be a big drama or avoid restaurants that appear to have some good options. Same for traveling...I want to be able to eat and not have it involve carrying my own food everywhere. If there are menus and information online, I certainly check it and will ask some questions where possible, but perfection in veganism has really stressed me out in the past. Thanks for being open about how you handle eating out.

I don't really know the difference between North Indian and South Indian food but all of this looks good to me...
Especially those cauliflower fritters.

That's totally my philosophy on dining out, too.

I have been CRAVING Indian food so badly for weeks. I just finished reading The 100 Foot Journey, and after that, all I wanted was curry.

Now, my craving is worse!

I have heard that the Curry Bowl is great! Have you tried Taj Mahal and Star of India here in LR? I like Star of India, but they seem to have less vegan stuff on their buffet. Taj Mahal is super fresh and delicious.

Those doughnuts look a little like Gulab Jumun but if they were savory rather then sweet they were probably vada.

I totally agree with your dining out philosophy.. when I was super strict, I could rarely enjoy a meal out.. it is nice to be able to just enjoy. I obviously avoid anything that is most likely not vegetarian.. it has also been a relief when it comes to eating at my boyfriend's family during holidays. We have a favorite Indian buffet with a similar offering. Dosas are amazing!

I love reading that your restaurant philosophy is the same as mine. I hold the cheese, etc when out but would rather not have to interrogate my server when dining out and I think my friends and family appreciate it too.