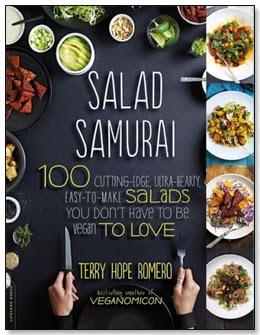 When a new cookbook by Terry Hope Romero or Isa Chandra Moskowitz (or both of them together) hits the stands, I scoop it up asap. Everything they write is vegan gold, and I knew Terry's new Salad Samurai would be no exception. I purchased the book a few weeks back, and I've been perusing it's pages like a novel ever since.

Here's the thing: I love salads. I eat salads (typically as a side dish, sometimes as a main) at least three to four days a week. Salads make me feel better about eating chips and ice cream and vegan fried chicken. It's all about the balance. But honestly, my side salads have been pretty lame lately — bagged lettuce, carrot, radish, maybe a cucumber, and some low-fat dressing. Uninspired.

But Salad Samurai is changing all of that! For one, I'm much more excited about dinner salads when I see her full-color masterpieces on every page. And the salads are arranged by season, which allows me to eat with the cycles of the Earth, which is really important to me for hippie-dippie spiritual reasons. Each salad is masterfully composed. And most importantly, the book lives up to it's tagline promise of "cutting-edge, ultra-hearty, easy to make salads you don't have to be a vegan to love." I mean, Pepperoni Pizza Tempeh Salad? Deviled Kale Caesar Salad? Almond Falafel Crunch Bowl? Does it get more cutting-edge than that?

I found a number of salads I wanted to try in the summer chapter. But I had a bag of dry chickpeas that I was dying to use (more on that in a few), so Salade Nicoise Bento Box it was! 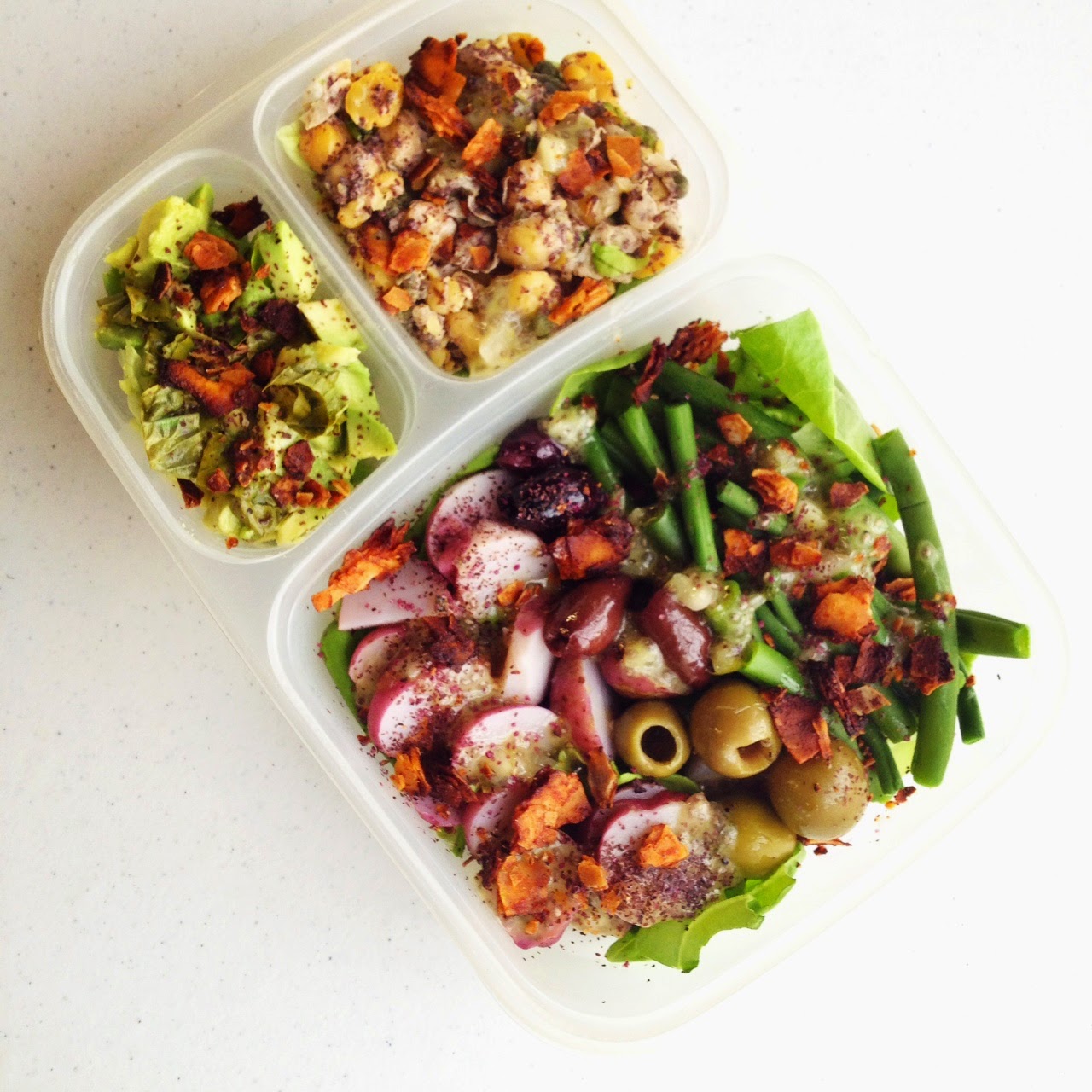 Isn't that gorgeous?! It's a vegan version of the French seaside salad served in a bento box! And that makes it perfect for taking to work for lunch, which I have been doing. In the big compartment, there are steamed baby red potatoes, steamed green beans, and fancy olives (from the fancy olive bar) over butter lettuce. In the medium compartment, there's a Sea Chickpea salad made with chickpeas, vegan mayo, and lots of dulse. And in the smallest compartment, there's a crazy awesome Basil "Egg" Avocado over butter lettuce. You actually toss avocado with black salt, basil, and lime juice, and it makes the avocado taste like eggs!! Crazy. The whole thing is drizzled with Shallot Mustard Chia Vinaigrette and homemade Coconut Bacony Bits. The coconut bacon bits are INSANE!

One day earlier this week, I decided to forgo the bento and serve the salad in a more traditional style with each ingredient served in a wedge. Such a fun salad to eat because you can really focus on one ingredient at a time. 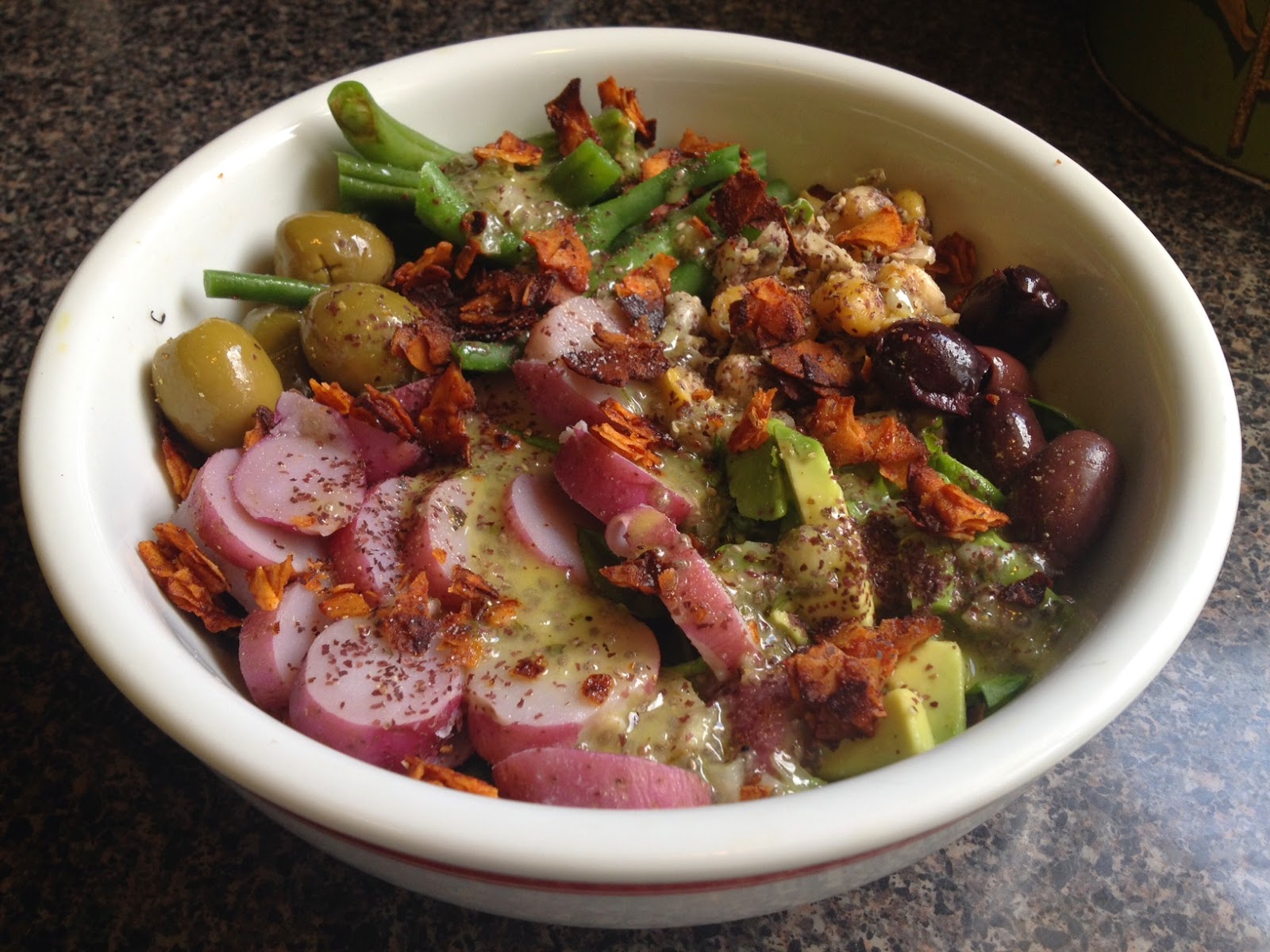 The salad was super-easy to make, even though there are several different recipes within one recipe. The Sea Chickpeas were especially impressive. I'm not always the biggest fan of dulse, but it works here. For my chickpeas, I used these Pereg Jumbo Chickpeas. They sent me several bags of their legumes and grains to try, and this was the first I've sampled. Here's a link to their Facebook page. 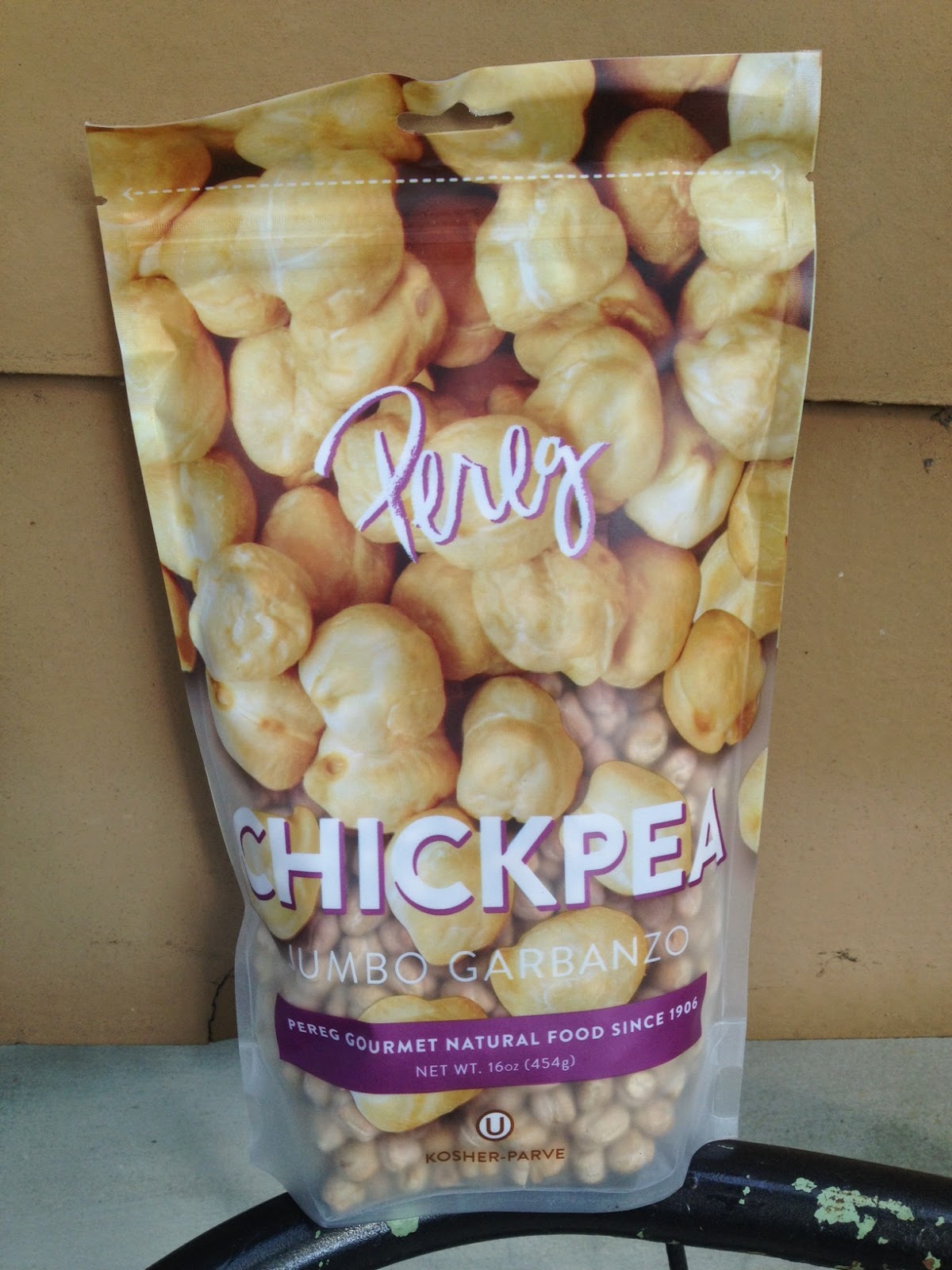 You might say a chickpea is a chickpea is a chickpea, but not so. These were different. Because they were cooked from scratch, I could control the texture. I left them a little al dente, so they'd have more of a bite. They were slightly larger than your average chickpea. And they just tasted so fresh! Also, I subbed Vegenaise Grapeseed Oil mayo instead of the homemade cashew-based ranch dressing Terry calls for. It just seemed easier, and the deeper flavor of the grapeseed oil (versus, say, regular Vegenaise) really added something special to this dish. The Sea Chickpeas would also be a great tuna substitute on a sandwich or crackers. 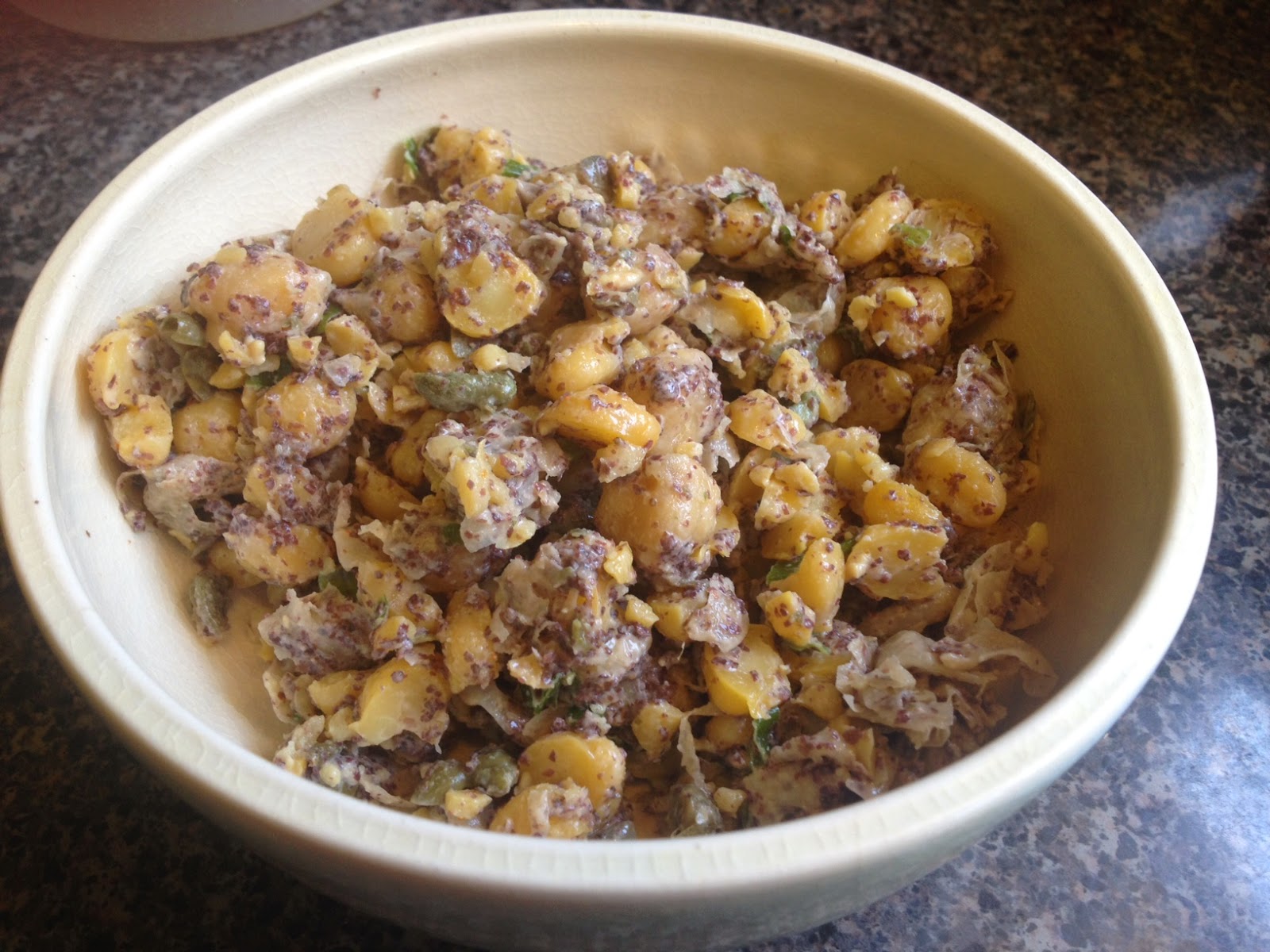 I have so many more recipes bookmarked in Salad Samurai! Some, like the winter Seitan Steak Salad with Green Peppercorn Dressing, will have to wait until they are in season. But I'm certain that before summer ends, I'll be whipping up the Avocado Amaranth Bhel Puri Chaat because I love Indian street food and popped amaranth!
Posted by Bianca at 10:35 PM

This looks amazing, I just bought this on Amazon a couple of days ago and it should be here tomorrow, I can't wait!!

This looks like a great book!! I need some salad inspiration!

That basil "egg" avocado is SO RIDIC! I love it! If it wasn't so hard to find good avocados here I'd probably be eating it every day!