Last week, we made one of my favorite go-to quick weeknight dinners — BBQ Tempeh Tacos! You just saute tempeh, coat with BBQ sauce, and spoon into tortillas with chopped pineapple and red cabbage. Plus, I added some microgreens and sprouts for good measure. 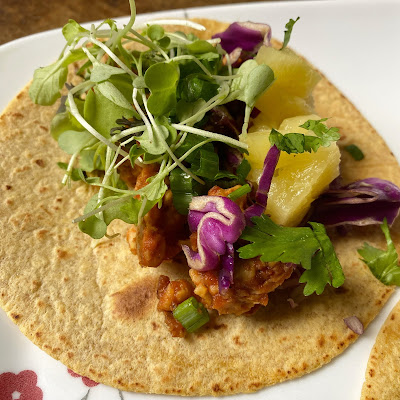 I'm still working my way through all the recipes in The Plant-Based Athlete book, so I recently made the Engine 2 Black Beans & Rice, a contribution from Rip Esselstyn. This has brown rice, seasoned black beans, corn, bell pepper, water chesnuts (a strange but yummy addition!), and salsa. Plus, I added microgreens and sprouts. I'm growing broccoli sprouts now, and I'm trying to eat them daily! And the microgreens were in my CSA.
I also got purple hull peas in my CSA, so I made Bryant Terry's Stewed Tomatoes & Blackeyed Peas with Cornbread Croutons from Afro Vegan. This was SO GOOD. The cornbread croutons are made with chopped, baked cornbread. I made mine in the air fryer. Definitely stepped up this already-awesome bowl of legumes. 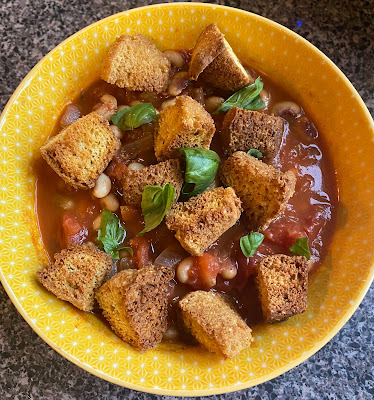 I was supposed to be going to Bonnaroo this weekend, but it's been canceled due to Hurricane Ida. BUMMER! So we're probably going somewhere else instead! I won't be blogging for the rest of the week, so I'll be back with photos of something (who knows?!) next week!
Posted by Bianca at 6:00 PM

Those tacos look great, will have to make them. Sorry your Bonnaroo trip got cancelled! Hope you'll find something fun to do this weekend.

I saw on the Gram that you guys found something else to do after all!

Hi Bianca hope you guys are having a lovely alternate vacation! If you get a chance can you share how you grow your broccoli sprouts in an upcoming post? I ferment and sprout lentils but have never done broccoli/micro green sprouts.