I've been on a bit of a stir-fry kick lately because they're easy and Paul will eat them. Here's a Thai-inspired Panang Curry Tofu stir-fry I made with panang paste, broccoli, and bell peppers. I used coconut milk in the sauce, and this was very tasty. 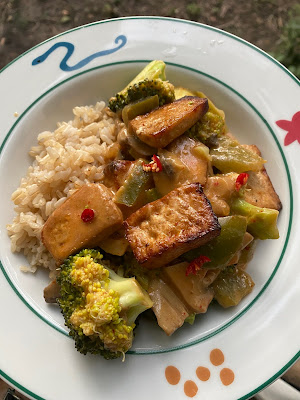 Here's a super-quick weeknight stir-fry with tofu, a bag of frozen stir-fry veggies, some CSA okra that was about to go bad, and basic sauce made from soy sauce, veggie broth, and cornstarch. On the side, we had some air-fried pre-made spring rolls that I found in the freezer case at Sprouts. We were hoping they'd be as good as the Trader Joe's veggie spring rolls, but they weren't. They were good though. But those TJ's ones are fire! 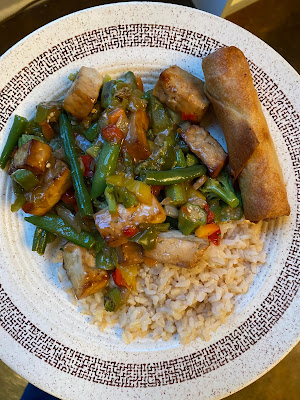 One night last week, Paul and I went out for dinner at Mulan Asian Bistro. We decided to split the Drunken Noodles with tofu. But he didn't care for the sauce, so he only ate a few bites. And I took home the leftovers for lunch the next day. It was definitely saucier than the drunken noodle dishes I've had elsewhere, but I still thought it was super-tasty. 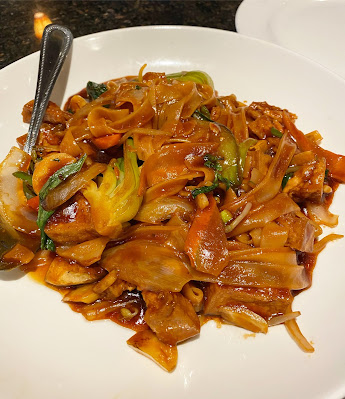 I made Vegan Sausage Gumbo last week using some okra from my CSA. I used my tempeh gumbo from Cookin' Crunk, but I subbed Simple Truth kielbasa for the tempeh. Really tasty! And it made enough for us to eat for lunches for a couple days. 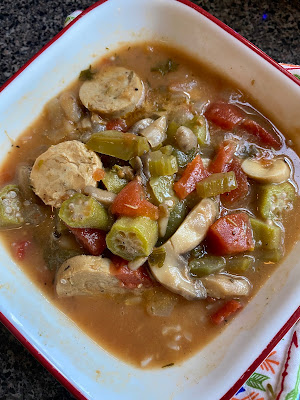 Here's a recent toddler-inspired meal! I made some Morningstar Farms Vegan Chicken Nuggets in the air fryer, plus some Garlic Mashed Potatoes and Sauteed Broccoli. Oh, and the gravy was Road's End Organics. I love those gravy packets! 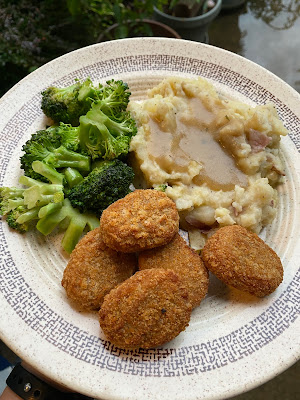 Alright, you've inspired me with your easy stir fries! Now that my son is off to college (sob!) we're re-thinking our dinners. Part of me wants to start cooking all the things he doesn't like (Indian food, for example) and part of me just wants to make things as easy as possible. Stir fries are ALWAYS a good option!

I hope Paul is feeling better with all this healthy and delicious food you are preparing for him!

I love stir-fries, so easy and so many options, I hope Paul is appreciating all the effort you are putting in!
Also, that final plate... perfect comfort food that I wish to eat now. Sure, it's 9.30 in the morning, but nuggets and gravy can be breakfast.