I've mentioned on the blog a few times that I've been tracking healthy habits all year with a point system. Every time I run or do yoga or eat all the colors of the rainbow in a day (I use the Rainbow app to track that! It's fun!) or engage in a few other healthy habits, I get a point. I use an app called Counter to track and tally my points. For every 100 points, I get a reward! Some of those rewards are experiences, like an at-home spa night or a yoga class at a fancy studio. Other are items of clothing, like a Find What Feels Good Yoga with Adriene shirt or a Pepper bra. But many of the rewards are food! And my 700-point reward came this weekend with the Fish Dinner from Imagine Vegan Cafe. 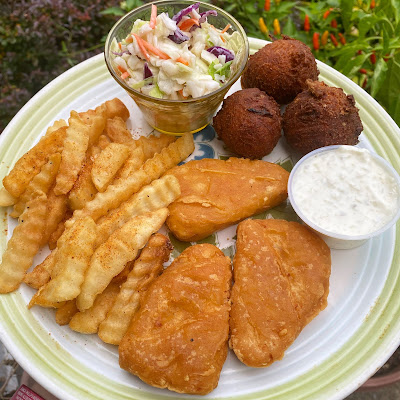 I rarely order this because it's literally a plate of fried. There's deep-fried Gardein fish with tartar sauce, hush puppies, fries, and coleslaw. But it's soooo good. And I earned it! I enjoyed this Saturday night after a 20-mile trail run.

On Fridays, I'm starting a second breakfast thing. I clean my whole house on Fridays before work, so I don't really have time for a sit-down breakfast. So I'm having smoothies on Friday mornings, but since I don't work out on Fridays, it didn't make sense to add protein powder. But then, the smoothies wear off after a couple hours. So now I'm having second breakfast at my desk at work. Last Friday, that was Avocado Toast from French Truck Coffee. They have the best avo toast! 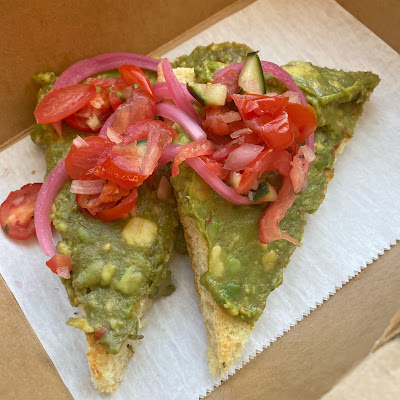 Monday mornings are the only days I actually get to sit down for breakfast (since I'm either running or cleaning on the other days), so I like to have something fun and special on Mondays. Today, that was a Breakfast Sandwich with Just Egg, Smart Bacon, spinach, and broccoli sprouts on an Ezekiel sprouted grain bun! 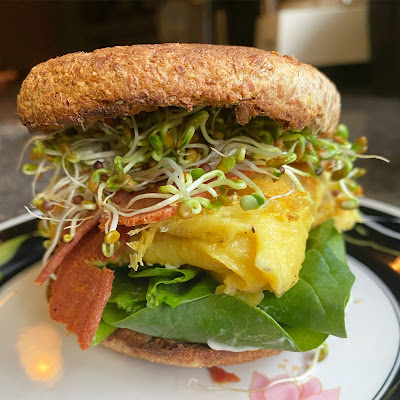 Silly me I would have thought a 20 mil run would earn its own reward! I have been leery to try the vegan fish foods but your pics look so yummy I might have to give a try.