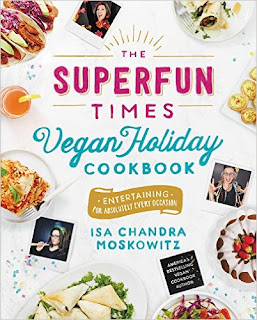 Wow. That was a CRAZY game, y'all. I was rooting for Atlanta, and I was certain we had the game locked up. And then there was that historic overtime. And then that amazing touchdown by New England. Just wow.

But even more mind-boggling than all of that was Lady Gaga's Cirque Du Soleil-inspired halftime show. THE DRONE LIGHTS! THE ACROBATICS! I didn't think anyone could top Beyonce's performance last year (because Queen Bey), but I think Gaga came pretty close.

During the first half of the game, I streamed the game on my laptop since I was busy in the kitchen, whipping up a recipe from the Super Bowl chapter in Isa Chandra Moskowitz's The Superfun Times Vegan Holiday Cookbook. I made a 2017 resolution to cook something from every chapter of the book throughout the year, and so far, so good. I made the Ginger Chocolate Banana Muffins for New Year's and the Cold Sesame Noodle Bundles for Chinese New Year.

I had a hard time selecting something from the Super Bowl chapter since dips and chips and snacky meals are my favorite. Everything looked so good! But I finally settled on these BBQ Nachos. 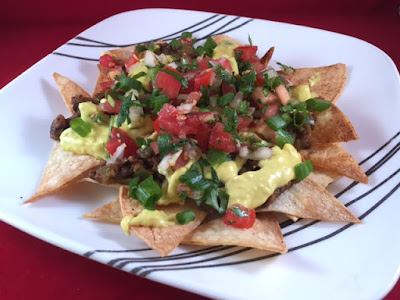 These are probably the most whole foodiest nachos I've ever had. The "meat" is made with a mixture of lentils and diced bell pepper coated in barbecue sauce. The queso is made from cashews. And the pico is made from scratch. The recipe calls for restaurant-style tortilla chips, but instead, I used my air fryer to make my own chips using corn tortillas.

I just sliced tortillas into wedges, misted with a little olive oil and sprinkled with sea salt, and then I air-fried them for 7 minutes. They came out perfectly crispy! And since they were practically oil-free, I ate about twice as many chips as I would have if I were using regular chips.

The Falcons may have lost the Super Bowl. But I won on this meal! Thanks again, Isa!
Posted by Bianca at 10:00 PM

I didn't watch the game, but I saw Lady Gaga's halftime show and it was amazing!! Those nachos look delicious. Lentils are so versatile!!!

I didn't actually watch the SuperBowl, but I made Isa's Chipotle Mac & Cheese from the SuperBowl chapter last night (I made the modified version to accommodate my lack of chipotle and Brussels sprouts).

My sentiments about the Superbowl exactly! AND Superfun Times: I made the Artichoke Dip! It was pretty amazing.

I made these nachos for Christmas eve and they were so good!
I am also trying to cook something from each chapter of this book at the appropriate time of year. I didn't watch the superbowl because... well... sportsball (though if I hadn't been working I could have, showing it live on Australian free to air TV is a thing now), but I did make the Cincinnati Chili for dinner the night before.

Those are some gorgeous nachos!! And i would totally feel great calling that dinner with such great ingredients! I didn't watch the superbowl but i did make some chili for dinner which i topped with avocado and cilantro. Nachos are next!
Ttrockwood