I've long been a fan of Yves Veggie Cuisine vegan products. They make all kinds of stuff — ground veggie burger, veggie dogs, burger patties, breakfast patties, vegan bacon, deli slices — and they've been around forever. Back in my pre-vegan days (pre-2004), I remember Yves vegetarian products being the only game in town around here. They've been in the plant-based meat business for more than 20 years!

Yves offered to send me two of their products that I'd never tried. I'd seen these Falafel Balls and Kale & Quinoa Bites in stores, but for some reason, I'd never picked them up. 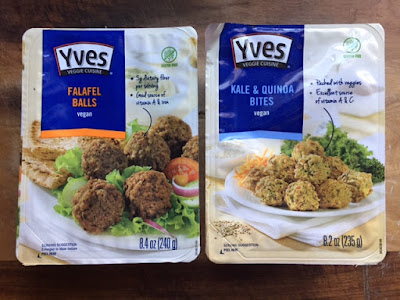 The Kale & Quinoa Bites are made with potatoes, chickpea flour, kale, carrots, quinoa, onions, oil, vinegar, and spices. They're like little meatballs, and they have a very savory almost burger-like flavor. The texture is toothsome, and they hold together well. In fact, these would be fantastic atop some spaghetti with marinara. 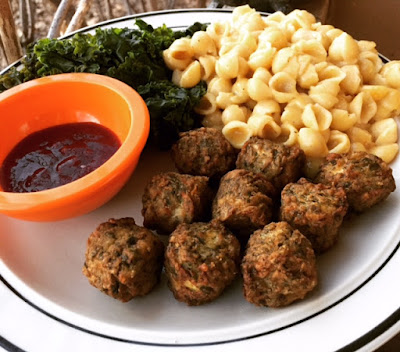 But I opted to eat them by solo, dipped in Trader Joe's Roasted Garlic Sriracha BBQ Sauce (seriously the best BBQ sauce I've ever had, y'all). These made for a great meaty main with some boxed Annie's Naturals Vegan Shells & Cheese (this has a pumpkin/sweet potato cheese base) and steamed kale. Perfect for those rushed nights when you don't have time to make something from scratch. The bites baked in the oven for about 13 minutes, the same amount of time needed to make the macaroni and prep and steam the kale.

I was tempted to stuff the Falafel Balls into pita and call it a day, but then I got inspired to whip up a Falafel Salad! 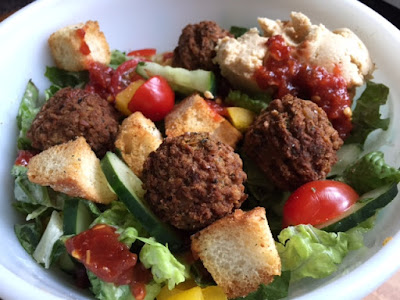 This was soooooo good. The falafel balls have an amazing flavor that's totally restaurant-worthy. But since they're baked (not fried), they're not greasy like falafel usually is. I placed these atop a bed of romaine and fresh veggies tossed with a homemade lemon-tahini sauce and served with air-fried sourdough croutons, Roots Oil-Free Hummus, and chili-garlic sauce.

Bake the falafel according to package instructions.

To make the dressing, whisk all ingredients in a small bowl.

To assemble, divide the lettuce, bell pepper, cucumber, onion, and tomatoes between three bowls. Toss each bowl with a couple tablespoons of dressing. Top each bowl with four falafel balls, 2 Tbsp. hummus, and a 1/2 cup croutons. Top with a little chili sauce if desired.
Posted by Bianca at 8:00 PM

I think Yves burgers were the first vegan burgers I ever had, and they are still one of my favorites! I saw your salad on Instagram and drooled immediately!!I haven't seen the falafel, but I will definitely be on the lookout for it!!