Most people know February 2nd as Groundhog Day, but did you know the day has roots in an ancient Gaelic festival celebrating the impending arrival of spring? It does! Today is Imbolc (also called Candlemas), and it's the midway point between Winter Solstice and the Spring Equiox. It means winter is halfway done! Spring is coming!

It's actually one of my favorite holidays since it adds a little brightness to the dark, cold days of winter. It hasn't been terribly cold here this winter, but we've had a lot of back and forth — a sunny 70-degree day followed 3 or 4 dreary, cloudy 40-degree days. Those cold days feel so much colder when you were in short sleeves the day before.

Imbolc is traditionally celebrated with dairy products and seeds. Dairy was popular because, back in the day in Ireland and Scotland — where the festival originated — this was the time of year when baby sheep were being born, and ewe's milk was plentiful. The seeds symbolize rebirth and renewal. Of course, I don't consume dairy ever (and it's just not right to take milk meant for baby animals anyway!) Instead, I substitute with vegan milks and dairy-like products, like cashew cheese, vegan sour cream, and coconut yogurts.

There's also a lot of emphasis on the colors green and red — green is the color of the coming spring and red is the color the Celtic goddess Brigid's fiery red hair! I had a 3-mile run planned, so I started my day with a post-run ABC Green Smoothie from the Vega website. Look at that beautiful spring-y smoothie! This has green apple, banana, and carrot (hence the ABC in the name), as well as spinach, flaxmilk, and Vega One French Vanilla protein powder.

My morning snack wasn't really themed — just smoky artichoke hummus and crackers. But my lunch ended up being just perfect for Imbolc! And I didn't even plan it that way. I had some leftover Vegan Swedish Meatballs from last weekend's meatball party at Susan's. I served those alongside Sauteed Garlic-Lemon Spinach, Lingonberry Sauce, and Dry Toast. The white sauce on the meatballs (these are IKEA vegan meatballs in a homemade cream sauce!) symbolized snowy winter, while the green spinach was like fresh, green grass. And the lingonberry jam was red like Brigid's hair! 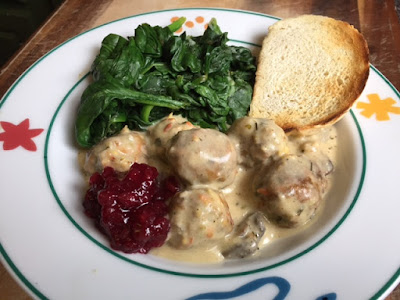 Because dairy is so big on Imbolc, milk teas are common. And I love to have afternoon tea every day at my desk. Before work, I simmered some flaxmilk with a couple teaspoons of maple syrup, a little dried lavender, and some cinnamon, and then I strained out the herbs. Lavender and cinnamon are both commonly associated with Imbolc. I took the milk to work and stashed it in the fridge until tea time (3 p.m.!). Then I heated the milk, added a little hot water, and simmered a bag of Tazo English Breakfast Awake Tea. This was amazing and so perfect with a little square of vegan hazelnut chocolate. 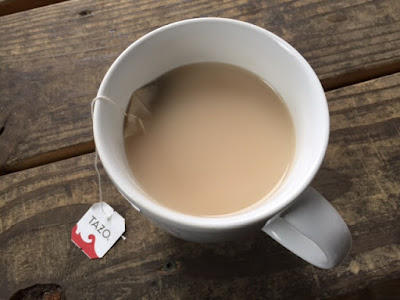 I don't always theme my entire day's meals around Imbolc, but I'm such a nerd for a theme. And eating seasonally all day was such fun! I do, however, always make a traditional Imbolc feast for dinner. This year, I picked a Potato & Carrot Soup from Cooking By the Seasons. 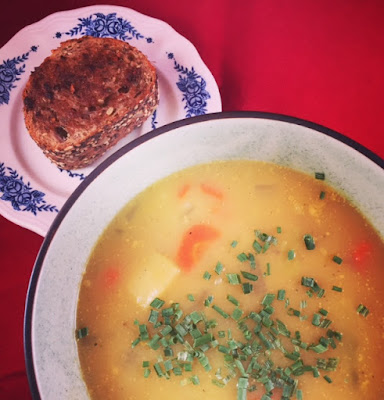 Potatoes are great at Imbolc because they harken back to the festival's Irish roots, and this soup is loaded with both chunky and pureed carrots and cabbage. This soup also contains plant milk for a super-creamy texture. On the side, I had some seeded bread (because seeds!) with Viana onion butter (that's the reason it looks a little brown — roasted onions!). I also had a simple side salad with green leaf lettuce, balsamic vinaigrette, and hemp, sunflower, and pumpkin seeds. 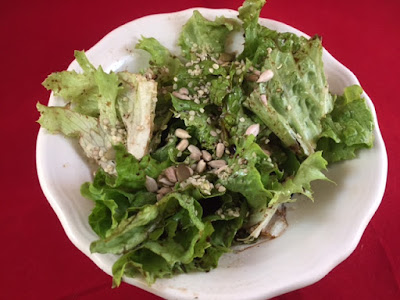 I always love your theme meals!! I am sooo ready for spring. Snow has not been my friend!! Everything you ate today(yesterday) looks delicious!