It's random meal round-up time! We'll start with some really yummy scores from the Raw Girls food truck. This totally vegan truck has two locations — one in Midtown outside Midtown Yoga and another in East Memphis outside Hollywood Feed. I dropped by last Friday for some treats. I got this Pear with Maple Roasted Chickpeas Salad — kale, chickpeas, Bosc pear slices, pecans, and a Dijon dressing. This was the perfect light snack before an art opening on Friday night since I knew I'd also be snacking at the event. 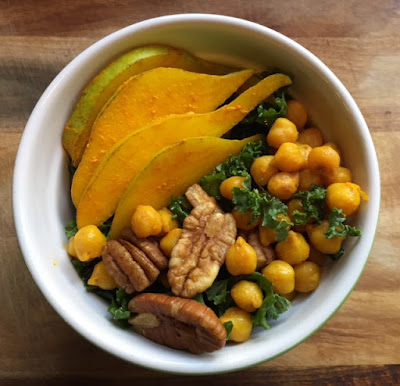 Later that night, my salad and art show snacks had worn off, so Misti and I split a Greek Flatbread from Midtown Crossing Grill. This tasty pie has red bean hummus, arugula, kalamata olives, cucumber slices, and radish slices. 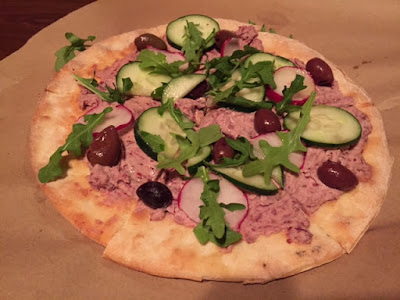 The next day, on Saturday morning, I had a long run planned — 14 miles. Usually, I follow those long runs with a protein smoothie made with Vega Sport powder. But I'd picked up the Raw Girls Cherry Crumble (made with gluten-free oats and sweetened with coconut nectar) on Friday, and their Facebook page suggested trying this warmed with a side of ice cream. So I made Protein Nice Cream using a banana and some PlantFusion vanilla protein powder. I heated the crumble in the microwave for a few seconds and served with nice cream on the side. Perfect combo of warm and cold and protein. 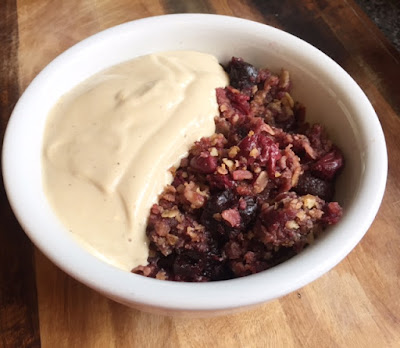 I also picked up a Merry Fabulous Juice from the Raw Girls, and I had that as an afternoon snack. This had beets, oranges, pineapple, apple, lemon, cucumber, ginger, and basil. 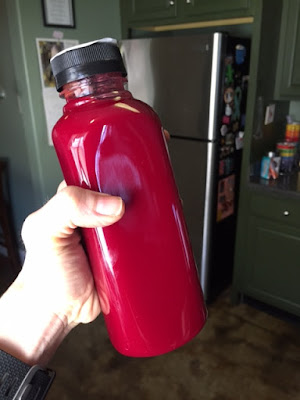 On Monday, my company — Crosstown Arts — had a staff retreat at a lovely lakehouse in Arkansas, about an hour away from our office in Memphis. It was a nice getaway and lots of fun (we all wore wigs!), and we had lots of delicious vegan food. When we first arrived, there was breakfast waiting on us — Vegan Biscuits with homemade cookie butter and strawberry and blackberry preserves. 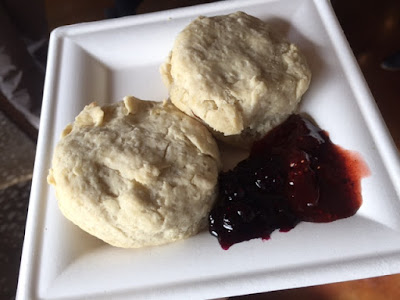 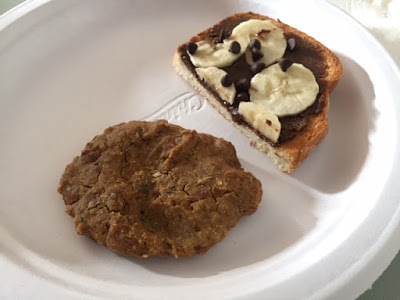 Lunch was Falafel in Homemade Pita, Potato Salad, and Cucumber Salad. That cucumber salad has the BEST sesame-vinegar marinade, and I absolutely loved the homemade pita bread. 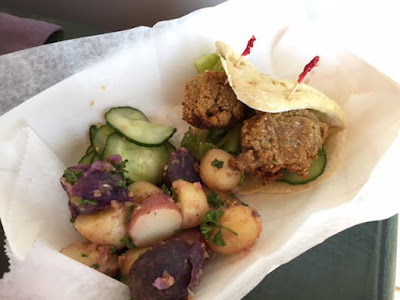 And for dessert, there were Blueberry Crumble Bars! Needless to say, I left that event completely stuffed and happy. And we got some important work done too! 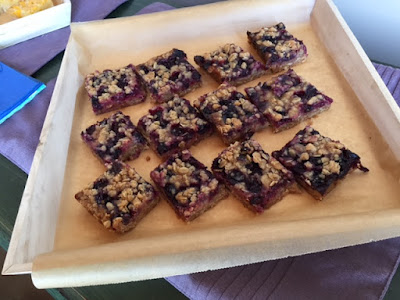 I had a Crosstown Memphis Community Development Corporation meeting on Monday night when I got back into town. We were meeting at Midtown Crossing, and I wanted to eat something light since I'd been stuffing my face all day. I settled on the Greek Salad with added chili tofu and minus the feta cheese. The tofu as an add-on isn't on the menu, but they were happy to add it! The addition of protein made this a complete (but still light) meal. 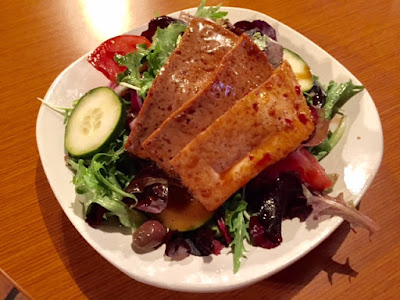 Sadly though, by the end of the day Tuesday, I was starting to come down with something. It seems like almost everyone in the office caught some sort of cold after our retreat. Some got it worse than others, and mine seems to be mostly a head cold (no chest stuff yet!). I've been medicating with lots of Leap smoothie bowls (full review on those coming soon)! And juice! Like this Ginger Greens Juice and Sniffle Stopper Shot from Juice Bar. The sniffle stopper shot (lemon, cayenne, ginger, and a protective essential oil blend) really helped! 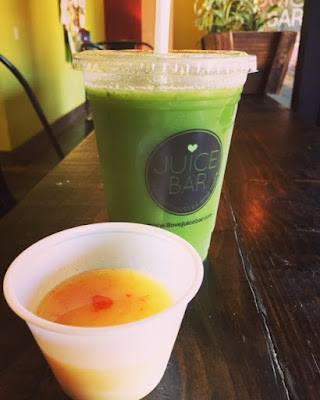 Last night, I was supposed to go to yoga class and then to dinner with friends at Imagine Vegan Cafe. But I canceled all of those plans in favor of going home, putting on my PJs, and whipping up some hot soup. I made this very green ramen bowl with Lotus Foods Jade Pearl Rice Ramen, baked tofu, miso paste, broccoli, kale, garlic, zucchini, carrots, mushrooms, corn, and peas. Just what I needed! Of course, I followed that with a hot toddy because that's the best part about being sick! 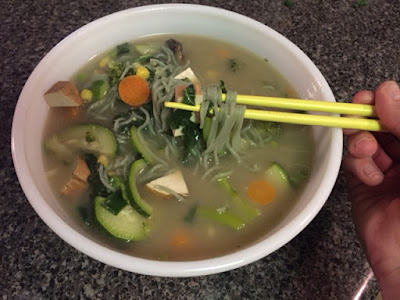 That's it for now. Hoping to be on the mend by the weekend. I had my longest long run (20 miles) before the Little Rock Marathon planned for Saturday, but it looks like that's out. But I should be okay. I've still got two weeks before the race, so I hope to be back to 100% health by then.
Posted by Bianca at 9:00 PM

I am really impressed by all the delicious vegan food on your company retreat!
Green juice totally helps me when I'm sick too- the sniffle stopper sounds serious and kind of amazing.
Good call to head home for soupy ramen, hopefully you can rest and take care of yourself to recover quickly
Ttrockwood

I need to try and make the sniffle stopper, it sounds very beneficial! It's really amazing that you had such great vegan food at a work retreat! I hope you feel better soon!

Hope yr feeling better soon!
The merry fabulous juice sounds fantastic. I love an orange/ginger/beet combo.
And I really gotta get on the nice cream train. That crumble looks so goregous! I'm a big fan of temperature clashing meals, haha.