Y'ALL. There's a new love in my life, and it lives on my kitchen counter. My mom got an air fryer for Christmas, and my parents love it so much that, less than a month later, they decided that it was a must-have appliance for me as well. A few weeks ago, I got a text from my dad — "I got you an air fryer." YES!

And here it is! Meet the NuWave 3-Qt. Brio Air Fyer.  I didn't think I had enough counter space for another appliance, but with a little creative rearranging, I found a spot between the Breville juicer and the food processor. 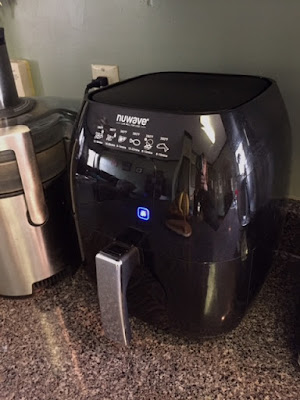 The air fryer was one of those appliances I didn't know that I needed until I had one. But it's life-changing. I'll admit that I didn't really understand how they worked or why anyone would want one. I love deep-fried foods, and I do prepare them at home from time to time. But I don't really crave fried things that often, and when I do, I usually just go buy them somewhere else (I'm looking at you, Imagine Vegan Cafe). I thought an air fryer was just a healthier way to fry things, and it is. But it is SO. MUCH. MORE. It's also a really fast oven and even a food dehydrator!

Perhaps my favorite use for the air fryer so far is for making perfect, chewy, crispy "fried" tofu! I love the fried tofu served in Asian restaurants, but when I'm cooking at home, I'd rather avoid deep-frying. Now I can get that amazing textured tofu at home without the fat! Check out this Air-Fried Tofu I made last week to have with sauteed broccoli. 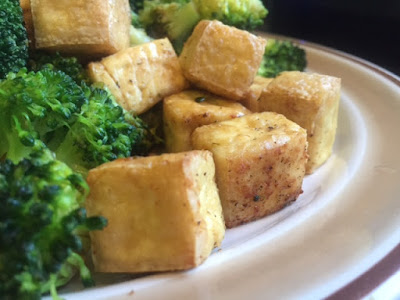 For this, I cubed some extra-firm tofu and then microwaved those cubes for about six minutes to zap out all of the water. No pressing necessary. Then I sprayed the cubes with a little olive oil in a Misto (a non-stick cooking spray would also work), added some salt, and put them in the air fryer on about 390 degrees for five minutes. After that, I opened the fryer drawer, shook the cubes around and put them back in for another five minutes. And one more round of shaking and cooking for five minutes, and they were done. PERFECTION. You could marinate this first for extra flavor, but I just used salt. And then I sprayed the tofu with Bragg's on my plate.

I've also made Tortilla Chips using corn tortillas. I made these last night for my Super Bowl nachos. I simply cut tortillas into eight wedges, sprayed with olive oil and salt, and air-fried for seven minutes, stopping once to shake the fryer basket. This made very crunchy tortilla chips that stood up well to all my nacho toppings. And since they were just corn tortillas, they were so wholesome! 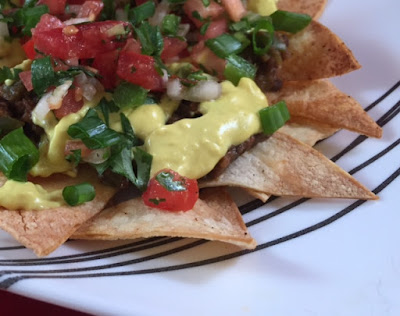 Remember when I said it was like an oven? Yep, well, you can also roast and toast things. I've been using the fryer, rather than my oven, to toast vegan-buttered bread because it takes about four minutes in the air fryer versus 10 or so in the oven. And with the air fryer, there's no need to pre-heat.

I've also made Roasted Cauliflower. I simply tossed cauliflower with a teensy bit of oil so my salt would stick and then I air-fried it on 350 until it was just beginning to brown. It only took about 6 minutes! It would have taken 30 to 40 in the oven. 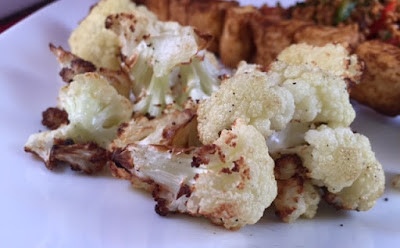 My parents bought me a Camilla Saulsberry's 175 Best Air Fryer Recipes book to go with my air fryer. It's not all vegan, but many recipes are. Camilla has several vegan cookbooks as well as non-vegan ones, so she's pretty good about including recipes that are vegan-friendly. Well, the very first recipe I made from that book was the Kale Chips! 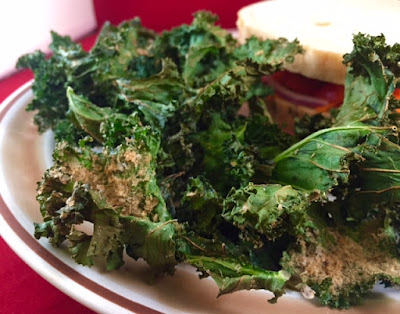 I have an Excalibur dehydrator, and it makes fantastic kale chips and raw crackers and such. But kale chips in the Excalibur take about 24 hours, and sometimes, you need kale chips right away. Am I right? Camilla's air fryer recipe was so simple and quick! Just 6 minutes. Her recipe called for spraying the kale with olive oil and salt, but I added a sprinkle of nooch too. These were simple, crunchy, and quick. Just what I needed as a side to my sandwich.

But I would like to eventually try some more complex kale chips, maybe with a cashew-red bell pepper cheesy coating. I'll let you know how those turn out.

My parents have been using their air fryer to cook frozen fries, onion rings, and tots! I don't buy those things often, but I do love them. We made some Crispy Tater Tots at their house a couple weeks ago. You seriously can't even tell these aren't deep-fried. They get so much crunchier in the air fryer than in the oven, which is probably how I'd typically prepare them at home. 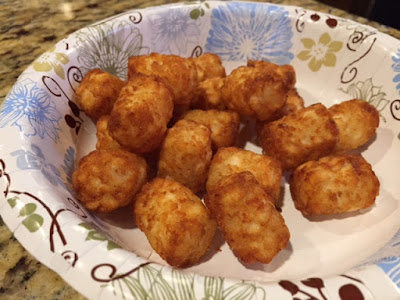 I'm still learning all of the things my air fryer can do. Apparently, you can even bake in it! I'll have to try that and report back.

If you have an air fryer (or are thinking of getting one) and want to see what other people are experimenting with, there's a Facebook group called Vegan Air Frying Enthusiasts. It's maintained by the great JL Fields, who is currently working on a vegan air frying book (due out this June!).
Posted by Bianca at 9:00 PM

First of all, awesome title!!! I've definitely been hearing a lot of great things about air fryers. It's awesome that they're so versatile!! Now I'm craving kale chips!!

Ahhh I'm so jealous! I really want an air fryer and seeing all of the delicious things you've been making I definitely really want one now! I'll have to add it to a wish list or something :) I love how quickly they cook everything too!

Please keep sharing your recipes! I got one for Christmas & still have no clue how to use it..lol