It's Fat Tuesday, y'all! One of my favorite food holidays!!! (Okay, in the moment, I probably think every holiday is my favorite, but today, this is my fave, okay?)

For years (going back to at least 2010), I've been making Kittee's vegan king cakes to bring to the office. The dough recipe is largely the same across her many amazing, no-fail king cakes, but the fillings vary widely. And I pick a new one every year. This year, I opted for this Apple Praline King Cake. 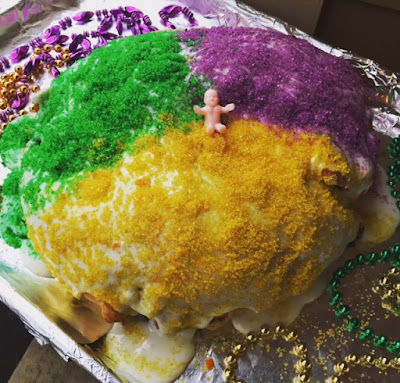 You'll notice the baby is on top of the cake rather than inside. That's because I tucked it into the dough too close to the edge before baking, and it baked its way out of the cake. My cake birthed a baby! After I sliced it, I tucked it snugly back inside.

Most years, I have a regular breakfast at home and then bring the cake in to work for morning dessert. But this year, I thought, "Why not have a slice of cake for breakfast?" Here's an inside breakfast shot. 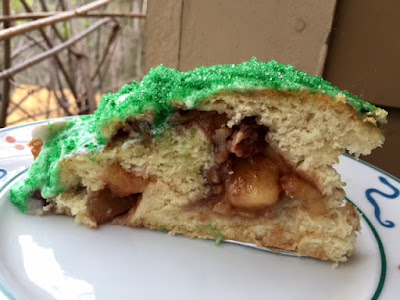 When my parents and I used to take regular summer vacations in New Orleans, we ALWAYS stopped at Cafe Du Monde for coffee, and my parents enjoyed their beignets. One year, my mom actually made VEGAN BEIGNETS and packed them for me to eat at Cafe Du Monde so I could have beignets too. She's the best! Anyway, they sell Cafe Du Monde Chicory Coffee at the Viet Hoa, my neighborhood Asian market (no idea why they sell this at the Asian market! Thanks to some commenters, I now know that this is also used in Vietnamese coffee, so that's why it's sold in the Asian market. You learn something new every day, y'all!). Anyway, I bought some and made a proper cafe au lait (half cashew-almond milk, half very strong chicory coffee). 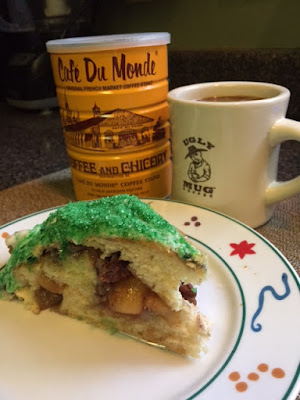 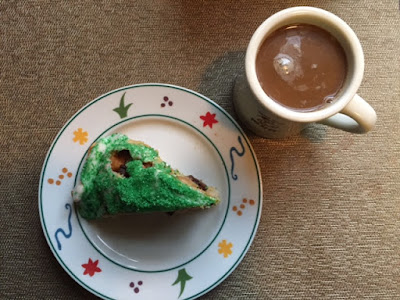 I shared the rest of the cake with my co-workers. Somebody found the baby, but no one is fessing up. Hmmmm. When you find the baby, it means you're supposed to bring the cake next year. Of course, I'll bring a vegan one anyway.

For lunch, I had some leftover Gumbo Z'herbs from The Superfun Times Vegan Holiday Cookbook by Isa. I made this for the Tennessee Equality Project gumbo contest a few weeks back and stuck a bowl in the freezer to save just for today's Fat Tuesday lunch. This kale-collard-turnip green gumbo is perfect with white rice. 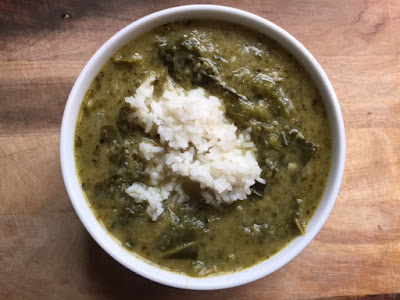 For dinner, I chose another recipe from The Superfun Times Vegan Holiday Cookbook — Blackened Scrambled Tofu with Garlic Polenta Grits and Greens. 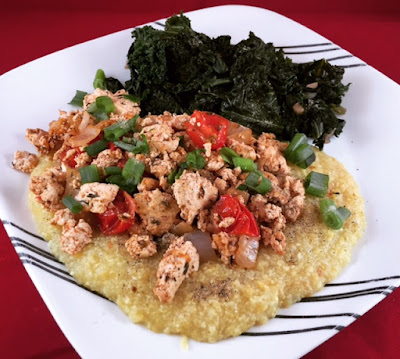 This was a fun, sort of non-traditional Fat Tuesday meal! The tofu scram is seasoned with Creole-inspired blackened spices (paprika, thyme, cayenne) and served atop slow-cooked garlicky grits. Isa calls these "polenta grits," but I think that's just cause she's from Brooklyn. Down South, we just call 'em grits. :-) For the greens, you can pick any green to saute and serve on the side. I chose kale cause it's quick and easy. It was sauteed with a little garlic and olive oil.

Fat Tuesday isn't a party without booze though! So of course, I knocked back a couple of NOLA-based Abita beers this evening. I had an Abita Wrought Iron IPA and a Sweet Orange Lager. 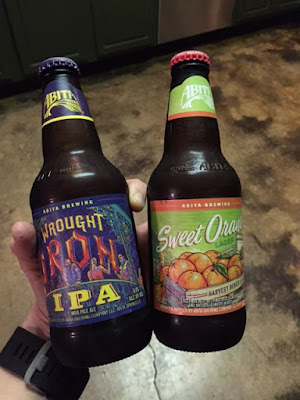 Well, that's it. Hope y'all had a good party night too! I'm still trying to decide if I want to give up anything for Lent this year. Not for religious reasons but just for the sake of playing along. If I haven't decided by the end of the night, I'll probably just skip it.
Posted by Bianca at 7:49 PM

Cake for breakfast sounds great. There's apple in there, so you're fine. I love that chicory coffee too! I've only been to New Orleans once, in 2004 or 05 - I was vegetarian but not vegan and glad for that 1) because it was difficult enough to find food I could eat (with my parents) and 2) so I could eat those beignets!!
I have some chicory coffee in my freezer right now too, but I don't think it's caffeinated, is it? I'd have to mix it with regular coffee to get any morning started, haha.

What a gorgeous cake!! And with the apple in it that is totally breakfast worthy. I've seem cafe du monde at a number of stores in chinatown, it's popular for making vietnamese style coffee. Not my thing but i've tried it a few times.
Very clever to save some of your gumbo for today. Never been to new orleans myself but i would love to go and see all of the historic homes there. Beignets sound fabulous but I've actually never had one and likely won't ever make myself
Ttrockwood

The reason Cafe du Monde coffee is at the asian market is that it's what is used in Vietnamese iced coffee. And the reason for *that* is because of French colonization of Vietnam. (Likewise with the banh mi, which uses a french baguette).

Your king cakes make me drool.

I love your story about the baby! LOL! That is one yummy looking cake!

Your cake is so beautiful! I also want to try that gumbo, it looks so delicious. I need to try chicory coffee, since I'm off the caffeine it sounds perfect for me! Your dinner looks delicious too, as always!

Your king cake looks amazing! That is hilarious that the cake birthed the baby. I absolutely love it. Cafe du Monde coffee is definitely the best. I feel like I need to find some decaf and start making that. Looks like you had a great Fat Tuesday celebration!

I had no idea Cafe Du Monde was used to make Vietnamese coffee! Thanks y'all. I love Vietnamese coffee and often order it without the milk. Good to know I can also use this to make it at home with vegan milk! As for Cafe Du Monde being decaf, this version actually DOES contain caffeine. They do make a decaf one as well. But I can't go without caffeine so I wouldn't buy that one!! Since the coffee is mixed with chicory (which comes from endive), it's possible that it has less caffeine, but I'm not sure about that.

I think apple cake for breakfast is a fine idea!