Random meal round-up time! Here's what I've been eating this week that didn't warrant a blog post all its own.

The Lemon Poppyseed FitQuick Protein Waffles are quickly becoming my new fave FitQuick flavor. I had this one Tuesday morning after a run — with maple syrup, tahini, and chopped nectarine. 22 grams of protein! 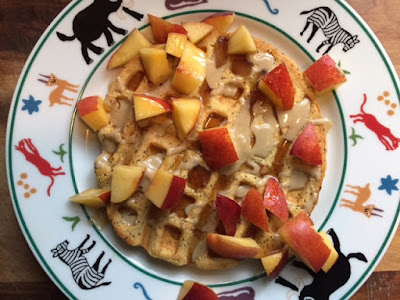 I feel like every "Stuff I Ate" post ever contains at least one ramen pic, so here ya go. Rice Noodle Ramen with Baked Tofu, Corn, and Carrots. Since I couldn't run last Saturday (due to my stupid cold), I slept in and ate ramen in my PJs while watching Empire. 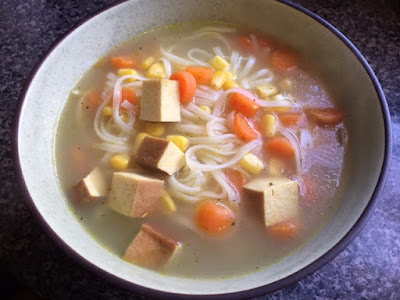 My office has catered staff meetings on the last Wednesday of each month, and the options are always vegan-friendly (yay! love this job!). This week, we had Veggie Sushi and Spring Rolls. I loved the thinly sliced avocado in those rice paper rolls. So good. I also scooped out some wasabi peas on the side. 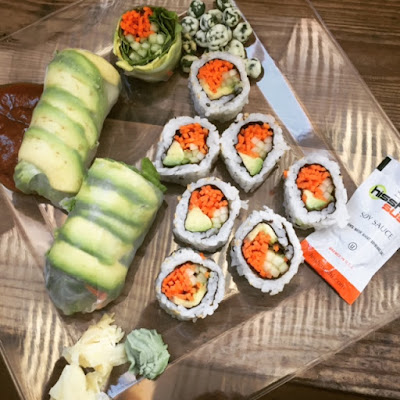 I'm back on my "eating at Imagine Vegan Cafe once a week" plan. Last Friday, I ordered the BBQ Wrap as takeout (because I was still too sick to sit around people). It's a new menu item, and it was super-yummy! Here's an outside shot, served with salad and vegan ranch. 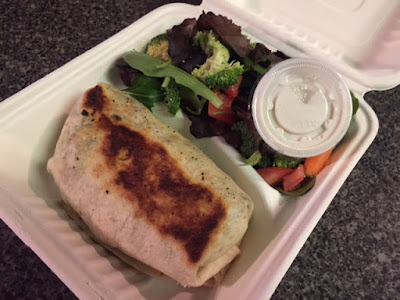 And an inside shot — chopped seitan BBQ, coleslaw, tomato, and mixed greens. 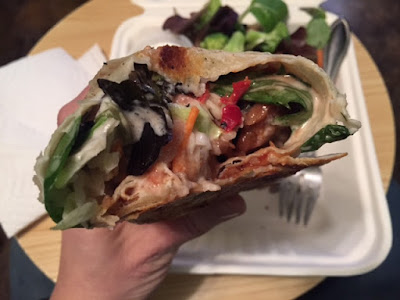 I was back at Imagine last night with my friend Nathan. He was in town from Jonesboro for his birthday, and I suggested we grab dinner. He is not vegan (not even close), but when I asked where he wanted to eat, he said, "I think I'd like to try this Imagine place you're always talking about!" Yay!! He got the vegan buffalo chicken sandwich and loved it.

I was craving something a little healthier, so I went with the Veggie Plate and chose some Southern faves — Blackeyed Peas, Collard Greens, Potato Salad, and Cornbread. I got some garlic aioli on the side for drizzling over the peas and greens. Hit the spot! 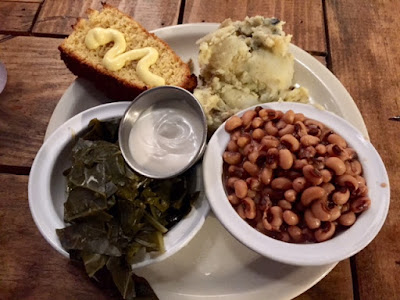 I wasn't planning to get dessert, but my friend Pam was working and she informed me that Stephanie had just dropped off a fresh batch of desserts. Stephanie bakes all of the cakes, pies, cinnamon rolls, and other treats for Imagine. I spied her Banana PB Caramel Pie and knew I'd probably need to grab a slice for a snack today. It got a little melty in my car while Nathan and our friends Kevin and Wes dropped by a nearby bar for margaritas (yesterday was National Margarita Day!), but it survived. Not the prettiest slice anymore but made for an awesome afternoon snack today at tea time! Graham cracker crust, banana layer, peanut butter cream layer, caramel layer. Amazing! 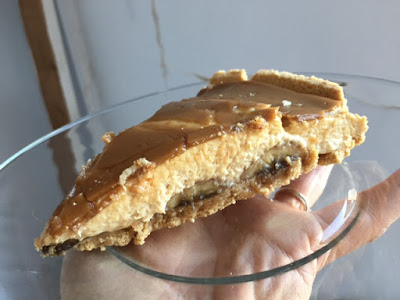 Finally, Tuesday was Vegan Drinks, and we had it at Deja Vu Creole Soul Food & Vegetarian Restaurant, a super vegan-friendly Creole joint, in honor of Fat Tuesday, which actually happens NEXT Tuesday. But we figured the restaurant would be slammed on the actual holiday. I got a not-so-Creole order of Curry Tofu (they make the best fried tofu and serve it in a variety of sauces, like BBQ, teriyaki, and curry). 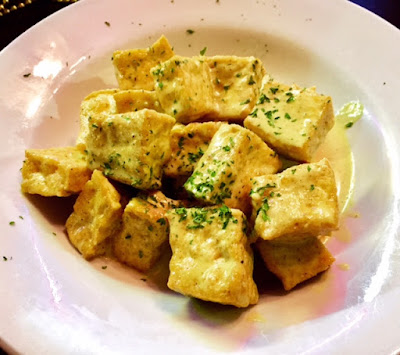 But I chose a spicy and appropriately themed bowl of Smothered Okra as my side dish! And of course, I washed it all down with NOLA-based Abita beer (Big Easy IPA). 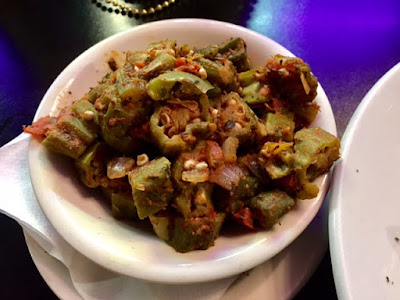 How awesome that your omni friend wanted to go to and enjoyed Imagine cafe! It makes me happy every time i can introduce one person to a delicious vegan meal.
And the veggie plate with collards is so fun since you get to have a several dishes in one
Ttrockwood

Oh my, everything you've been eating looks so delicious! Lemon poppyseed anything gets my vote, and that BBQ wrap looks so delicious, I want one! And don't even get me started on the caramel banana pie/cake. I want. I agree with Unkown too, I love that your non vegan friend wanted to go to Imagine, and loved it!! And curry tofu is right up my alley!
I've mentioned before that I've never had okra, and that it scares me but you always make it look so delicious!!

Oooh yum! Everything looks delicious! I don't typically like BBQ things but that wrap looks and sounds absolutely delicious. I'm a sucker for lemon poppyseed and the caramel banana dessert looks phenomenal! That's great that your omni friend is so open to trying vegan restaurants. My best friend is like that and it's really great!

I love Abita beer - and that smothered okra looks so good!! Nice choices.
Those wasabi peas on the side of yr plate are so funny. I can never tell if I really like them or not, but I always end up eating a bunch. They're good tempered with other stuff - like those Japanese nut/ rice cracker mixes

I really need to make some ramen now! I love the idea of nectarines on waffles too - why have I never done that?! What have I been doing with my life?!