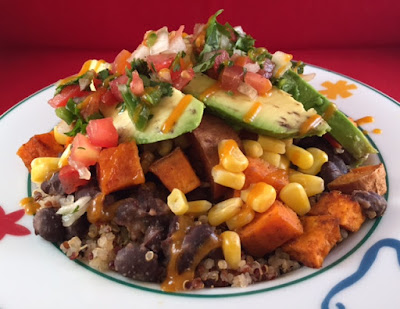 But first, let's talk about quinoa. I love quinoa! It's one of those foods that, at the time I went vegan in 2004, was completely foreign to me, and I was so excited to discover it, like so many other "new" foods that entered my diet around that time. I probably even pronounced it "quin-noah" like so many quinoa newbies still do (I'm looking at you, mom!). But now, nearly 13 years later, quinoa is kind of an old hat. It's a standard staple in my pantry that gets used in dishes several times a month.

But I've just discovered a new style of quinoa, and it's quite possibly life-changing. Toasted Quinoa! I Heart Keenwah recently sent me a couple bags of their Toasted Quinoa to sample and review, and wow — what a difference a little toasting makes! 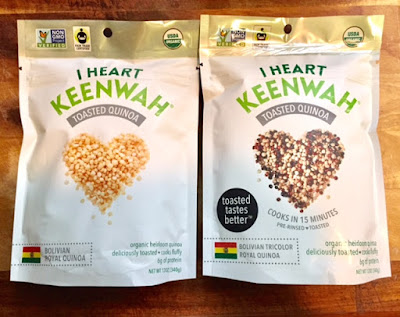 The sample bags came with a small bag of untoasted quinoa with the instructions to sniff it first and then smell the toasted version. The untoasted, raw quinoa has that green, seedy smell. It's not bad, but it's not exactly appetizing either. Just the smell of untoasted seeds. But when I opened the bag of toasted quinoa, I was blown away by the nutty scent. It smells like peanut butter! Y'all know how I feel about my nut butters, right? 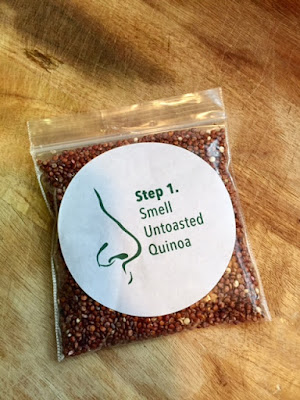 Here's what I Heart Keenwah says about their product:


Our toasted quinoa is made from organic Bolivian Royal Quinoa, a single-origin heirloom seed sourced exclusively from the shores of the Salt Flat region of Bolivia. Toasted quinoa also boasts a nuttier flavor and fluffier texture than all other boil-and-cook quinoas on the market. The product is a nod to the traditional way of preparing quinoa in Bolivia (phisara) – pre-toasting the seeds before cooking them to bring out the richest flavor. Once cooked, the quinoa retains its toasted, nutty flavor (with flavor notes similar to toasted sesame and nut butter).

To prepare, you simply cook toasted quinoa just like you would an untoasted variety. No extra steps necessary. No rinsing, no toasting. Just boiling. By the way, I've never been a quinoa rinser, but some folks swear by it. If you're one of them, this stuff saves you a step.

Besides the awesome nutty flavor of toasted quinoa, it also has a much fluffier texture. I cooked 1 cup of dry quinoa (so I could double the recipe below), and the quinoa cooked up into 4 cups! I feel like I usually only get about 2 cups of cooked quinoa from 1 cup of untoasted seed.

I used some of the Tri-Color Toasted Quinoa to create a Mexican-inspired burrito bowl using sweet potatoes and black beans. I recently listened to a No Meat Athlete podcast where producer Doug was sharing his go-to black bean and sweet potato burrito recipe. That combo is one of my faves, and it'd been years since I'd had a black bean and sweet potato burrito. I couldn't stop thinking of them after that episode! That's what inspired this bowl! The toasted quinoa adds a complex layer that's likely much more nutritious than a standard white flour burrito wrap. 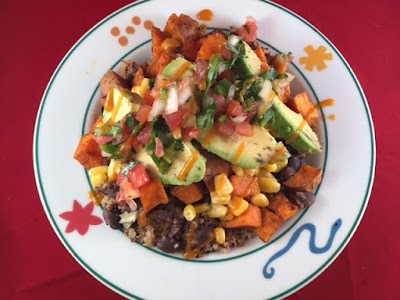 Pre-heat the oven to 400 degrees. Cube the sweet potato (I don't peel mine, but you can if you want) and, in a medium mixing bowl, toss cubes with oil, 1/2 tsp. salt, cumin, and paprika. Cover a baking sheet with foil and spray with non-stick cooking spray. Spread the cubes out in an even layer and roast for about 35 to 40 minutes or until lightly browned and fork-tender.

Combine the toasted quinoa and water in a medium saucepan and bring to a boil over high heat. Once it's boiling, cover and lower heat to a simmer. Simmer for 15 minutes or until water is absorbed. Remove from heat and let it sit for 15 minutes, covered. Fluff with a fork.

Place the black beans in a small pan and season with 1/2 tsp. salt, nutritional yeast, black pepper to taste, and just a splash of water (a couple tablespoons is fine). Heat on low for about 5-7 minutes or until heated through.

To assemble, place half of the quinoa, potatoes, black beans, and corn in a bowl. Top with avocado, pico or salsa (I used both!), and sriracha. Repeat with in another bowl with the rest of the ingredients.
Posted by Bianca at 8:48 PM

I'm usually not into quinoa, mostly because of the texture. I don't like fine grains (or pseudo grains in this case). However, I'm intrigued by the toasted aspect. Maybe that would win me over! And the bowl sounds delicious!

I am the worst at making quinoa! I never manage to get it fluffy, so I just use it in soups and stews. But I agree with Cadry, the toasted aspect sounds interesting. Beautiful bowl!!

Have you ever made popped quinoa? You just use a dry skillet with a lid and a few TB of quinoa til it toasts and puffs up and gets crispy! Fabulous ontop of salads or yogurt, whatever really. Takes maybe three minutes all together. Don't forget the lid since when they pop they can go flying!
Ttrockwood