My partner Paul works in Nashville, so he's only home a couple weekends a month. And he has to work on Tuesday, so we celebrated Valentine's Day a little early.

On Friday afternoon, I received a special delivery at my office. Paul ordered me two tins of Love Pop — vegan caramel corn with melted dark chocolate and fudge chunks — from local popcorn makers Green Goddess Gourmet Popcorn. They sell several flavors of their vegan popcorn at Whole Foods, but last week, they sent out an email about a special edition Valentine's popcorn available by request. So I forwarded the email to Paul as a hint. Haha! It worked! 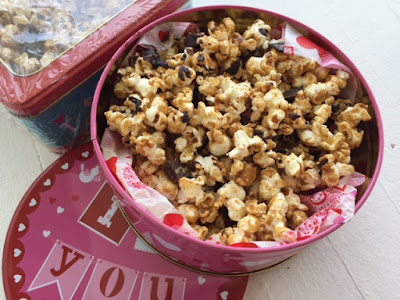 Paul didn't get into town until late Saturday night, so we spent Sunday celebrating our early Valentine's. In the morning, I made the Almond-Crusted French Toast with Strawberries from Isa's The Superfun Times Vegan Holiday Cookbook. With a side of Gimme Lean vegan sausage and mimosas. 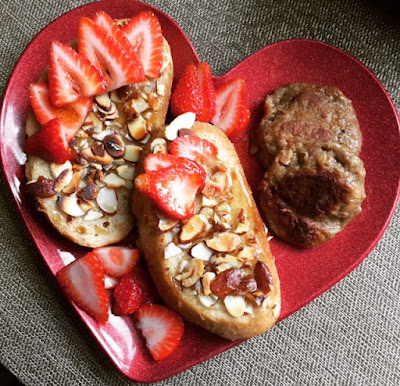 The almond-crusted toast was SO GOOD. I used day-old sourdough bread, and it was fried on the griddle in coconut oil. Then, of course, I doused mine in maple syrup. Like you do. Paul is pretty basic though, and he requested I make his sans almonds. And he didn't want any fruit. Just plain French toast and vegan sausage. Whatever. He doesn't know what he's missing. At least he loves vegan sausage! 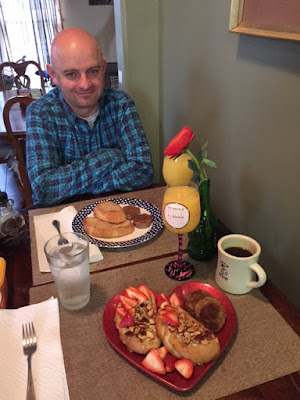 After brunch, we met up with our friends Vaughan and Nicole to see a local production of Rock of Ages at Playhouse on the Square. Such a fun show! 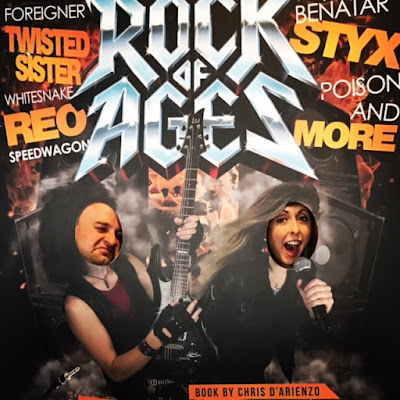 And then the four of us went to the newly opened Izakaya for pre-dinner cocktails. Izakaya is a new Japanese steakhouse/fusion joint in an old converted mansion that was almost torn down. The owners of the restaurant purchased the crumbling mansion, once known as the Nineteeth Century Club, with intentions to tear it down and build a strip mall-style restaurant. But that kind of development doesn't fly in Midtown, and residents fought hard to save the historic building. In the end, they agreed to fix up the mansion and open their restaurant inside. It's a great historic preservation success story! But sadly, the menu leaves much to be desired for vegans. That said, I was eager to see the rehabbed space, so we agreed to check it out and have cocktails. Here's my Dirty Martini, expertly mixed (Tito's vodka, extra dirty, two olives) by our bartender Carlos. 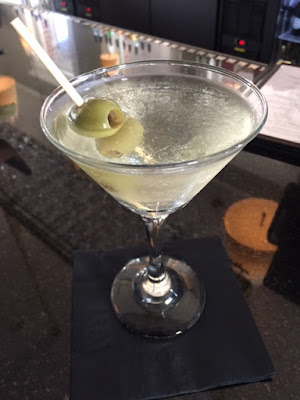 And here's our double date posse — me and Paul, Vaughan and Nicole — at the bar. 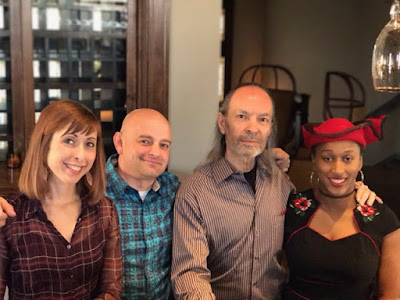 By the time we wrapped up cocktail hour, we were pretty hungry. So we headed to Bhan Thai, Paul's favorite Thai place. They have an excellent Pad See Ew, and it's my go-to dish there. Honestly, pad see ew is my go-to at EVERY Thai place. I just can't get enough of that combo of chewy rice noodles, fried tofu, and garlic sauce. 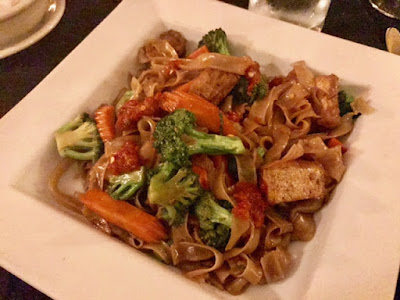 This was so delicious that I actually ate every bite there even though I was stuffed about halfway through and should have packed up some for leftovers. I left miserably full but very happy.

It was a fun evening with Paul and friends! I'll check back in tomorrow with a recap of my solo Valentine's meals on actual VDay! Hope y'all have a happy love day!
Posted by Bianca at 8:24 PM

Your French toast looks beautiful!! It is great that Paul loves vegan sausage! Your hair has gotten so long, I just noticed. I really want Thai food now!!

Aww what a fun Valentine's Day! The french toast plate is gorgeous! The Thai food looked incredible too. Definitely a lovely celebration! I love the Rock of Ages pic too, so cute!

Paul did good with that popcorn!! Hints or not that sounds like a fantastic treat :)). I'll take my french toast with the almonds too- i love that your place setting has three beverages! Haha, i totally do that myself. What a fun and delicious way to celebrate together
Ttrockwood

ha ha, I love the his and hers french toast plates. It's so much like our valentine's day his and hers pancakes! Musty likes the cheap artificial syrup and never wants anything fancy or special on his pancakes. Like you said - more for me!