There's a new vegan brunch place in town, and it's so good, it should be illegal. Every Sunday for the past few weeks, Chef Nigel and his partner Andrea have been serving up brunch in a pop-up location at The African Place in Uptown. We finally got a chance to check it out today, and it was fantastic!

A little history first: For years, Chef Nigel has been hosting pop-up events (including a very popular but short-lived brunch at Brinson's downtown a couple years ago) and catering jobs, co-running a vegan grab-and-go place, and even working for a stint at Imagine Vegan Cafe. He's been a fixture on the local vegan scene forever, and it's no wonder because THE MAN CAN COOK!

Now, he and Andrea are looking to start up a restaurant called Irie Vegan Kitchen. But getting your own place can be tough. Luckily, they're able to do this pop-up brunch out of The African Place at 581 N. Third St. now on Sundays from 10 a.m. to 2 p.m. By the way, The African Place is a little shop offering all manner of natural soaps (shea butter, black soap, etc.), incenses, traditional African clothing, jewelry, etc. They have some really cool stuff in there!

Anyway, onto what we ate. Here was the menu for today. But it changes a bit from week to week. 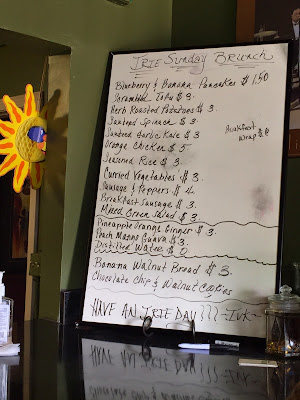 I went with the Breakfast Wrap and Curried Vegetables. The perfectly folded wrap (no messy corners!) was stuffed with a really impressive tofu scramble, vegan sausage, sauteed spinach, and vegan cheese sauce. It was really just perfect in every way. My curried veggies — bok choy, zucchini, broccoli, carrots, and mushrooms — were great too. 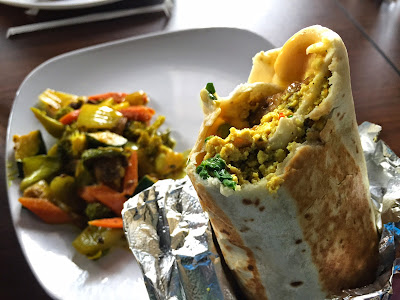 I love that everything is ordered a la carte, so you get to sort of create your own plate. Stephanie got Tofu Scramble, Vegan Sausage, Herb Roasted Potatoes, and a Blueberry & Banana Pancake. She wanted me to let y'all know that all this food wasn't just for her. She had to share with her kid. 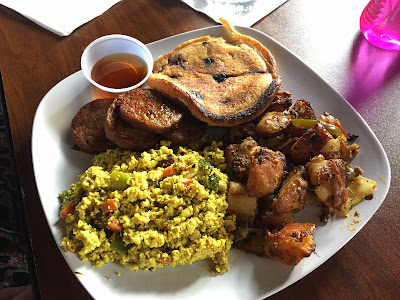 Her husband Richard wasn't keen on sharing, so he got his own plate — Blueberry & Banana Pancake, Vegan Sausage, Herb Roasted Potatoes. Richard and Steph said the pancake was top-notch. 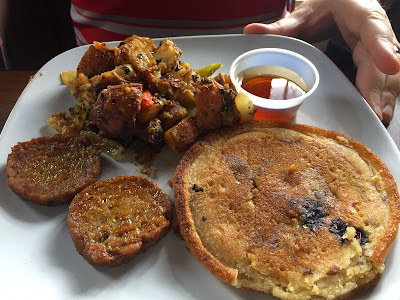 Cassi isn't crazy about breakfast foods, so she went with some of the more lunchy options — Orange "Chicken," Curried Vegetables, and Seasoned Rice. 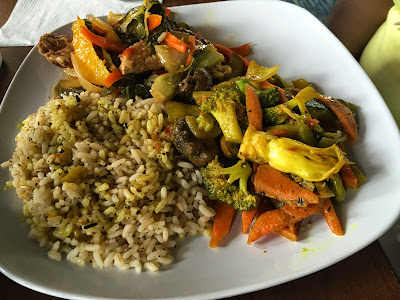 And her friend Stephanie (yes, there were two Stephanies) went with Tofu Scramble and Sauteed Garlic Kale. 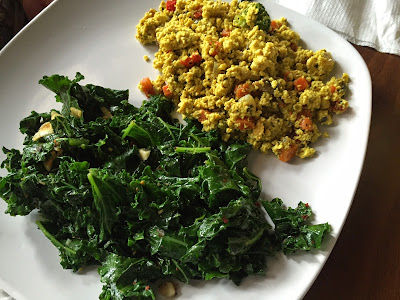 Megan went with the Sausage & Peppers and the Curried Vegetables. The sausage slices looked so good. I'm definitely getting that next time if it's an option. 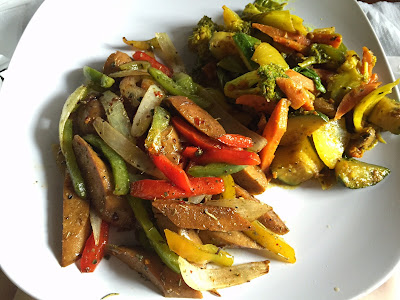 They also serve fresh juices. I didn't have any, but Stephanie and Richard tried both of today's offerings — Peach Mango Guava and Pineapple Orange Ginger. By the way, my Stephanie (as in Poopie Bitch Stephanie) had already poured half of the peach juice out in her kid's cup before I took this picture. That's why there's less in the cup. 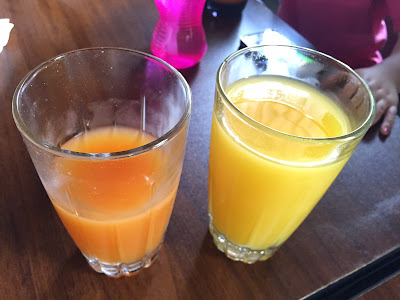 Between the six of us (well, the adults anyway), we ordered just about everything on today's menu with the exception of the Sauteed Spinach (but I had some in my wrap) and the Mixed Green Salad (because who wants salad when you can have sausage?). We didn't save room for dessert, but they were offering Banana Walnut Bread and Chocolate Chip & Walnut Cookies.

I'm super-thrilled to have another totally vegan brunch place! And I hope Nigel and Andrea can get their full-time restaurant started soon!
Posted by Bianca at 9:20 PM

The plate Stephanie shared with her kid is probably what I would have gotten. Probably just for myself =)

Everything looks wonderful, especially the pancakes and scramble.