I Have a Sandwich Named After Me!

There's a new banh mi in town, and it's name is Bianca! Seriously though. This is the Bianca's Banh Mi at Midtown Crossing Grill. 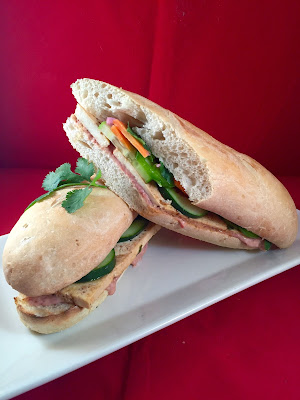 Midtown Crossing is a new-ish pizza joint in my 'hood. Their first menu had some vegetarian options that could be veganized, but they didn't have anything expressly vegan. But the folks who run the place — Octavia and Jeremiah — are awesome and accommodating, so they wanted to add some vegan options. After all, Midtown Crossing is also the home of Cassi's Pink Diva Cupcakery, and she gets lots of vegans coming in for dessert. They need a savory bite while they're there too! Here's an older post I did about Midtown Crossing.

So back to that sandwich: A while back, Octavia told me they were working on some new vegan menu items, and that they wanted to name the vegan banh mi after me! Aw, I was flattered! I absolutely love a good banh mi. The new menu came out yesterday, so I had to stop in and try my namesake sammy. 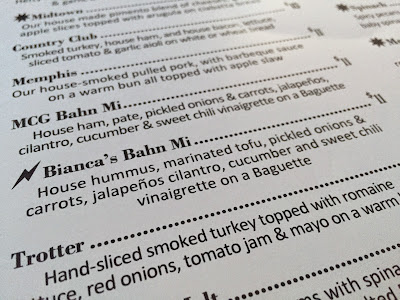 That's what's on it. Now, you may be thinking that hummus isn't a traditional banh mi ingredient. And while that's true, this housemade red bean hummus has a mild flavor that makes it the perfect replacement for the traditional pate (or mayo) on a meaty banh mi. It's compliments the juicy marinated tofu, thinly sliced cucumbers, spicy jalapenos, and house-made pickled carrots and red onions. Mmmmm. I could eat another one right now!

I haven't had a chance to try the other vegan menu items yet, but I can't wait. There's a Greek Flatbread with hummus, cucumbers, radish, kalamata olives, and garlic olive oil. And there are rice paper Spring Rolls filled with cabbage, candied pecans, basil, and pickled carrots, and they're served with a wasabi vinaigrette.

I love knowing that I can walk across the street and order a sandwich named after me, have a local beer from their bar and catch the Grizzlies game, and close out my meal with a sweet Cassi-made vegan cupcake!
Posted by Bianca at 10:22 PM

You know you are a first class rock star when you get your own sandwich!

SO awesome! Congratulations on the sandwich - I like the addition of the hummus, for sure.

I love that they named the sandwich after you!

I love that there is a lightening bolt next to it!

That's awesome, and it looks delicious!

That's pretty amazing. Having a sandwich named after you is on everyone's bucket list I'm sure. Congrats!