It's the weekend! And you know what that means? Sleeping in, parties, hangovers, movie nights, snack binges, and most importantly, BRUNCH! I've been meaning to put together a guide to the best vegan brunches in Memphis. And I'm finally getting around to it. The following are my top four faves, though there are a couple of other places to score a tofu scramble.

1. Imagine Vegan Cafe (2299 Young Ave.)
Imagine is the only all-vegan joint serving brunch. So there are no egg or meat dishes wasting space on the menu. And bonus: You never have to smell bacon frying. That's truly one of the grossest smells ever. Here are a few of my favorite dishes, though the brunch menu offers so much more. Note: You can also order anything from their regular menu during brunch hours if you're not feeling breakfast-y. They only sell beer, no liquor.

If you order one thing for brunch at Imagine ever, make it the Memphis Slam — two split biscuits topped with tofu scramble, vegan sausage, vegan cheese, and gravy. Boom. If that seems like too much food, they're happy to make a "half slam" by request. 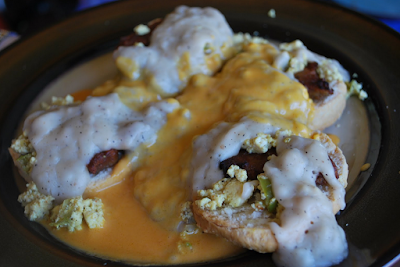 You can't go wrong with their Breakfast Platter — tofu scramble, biscuit, hash brown, grits (with or without vegan cheese), and your choice of sausage or bacon. I always go sausage because sausage. 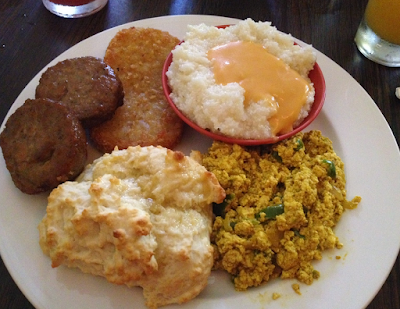 Stephanie, Imagine's baker, delivers fresh desserts every Sunday. And she also delivers a vegan tofu quiche. She varies up the flavor. I think this one was a Vegan Sausage and Cheese Quiche. Comes with a salad. 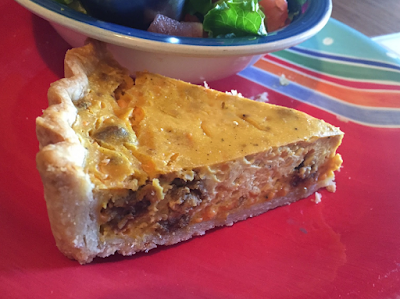 Imagine even has brunch appetizers, like these Sausages In Blankets! Served with maple syrup. 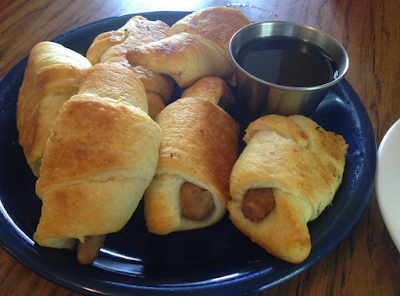 And brunch wouldn't be complete without Waffles!!! They have the most amazing fluffy waffles, and they come heavily buttered and served with tons of syrup. Your choice of sausage or bacon. You know what I'm having. 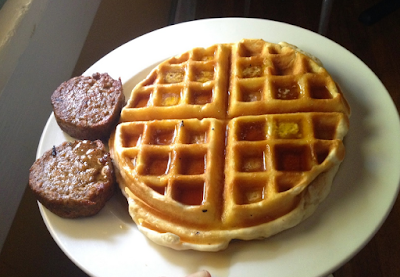 Remember when I said Stephanie delivers fresh desserts every Sunday? Well, she doesn't mess around. Stephanie's dessert is on point. She varies the selection up weekly, but my faves are her Caramel Pie, Banoffee Pie, Orange Creamsicle Cake, Insanity Bars, Maple Bacon Cupcakes, and Cinnamon Rolls (pictured below). 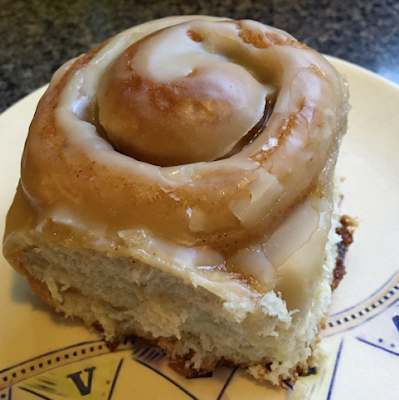 2. Fuel Cafe (1761 Madison Ave.)
This vegan-friendly joint has one of the best patios in Memphis. It's located in an old service station, so most of the seating is actually outdoors. Inside is very small. Brunches at Fuel are best in the warmer months! Fuel doesn't serve liquor, but they do make creative cocktails with their beers. This is their Fuel Mimosa (hard apple cider with mango juice). 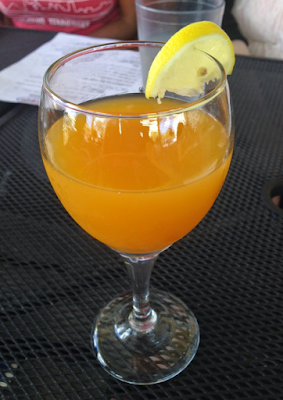 The Tofu Migas is beautiful and delicious — blue corn tortilla chips, tofu scramble, vegan cheese, salsa, and avocado. I love how generous they are with the avocado. 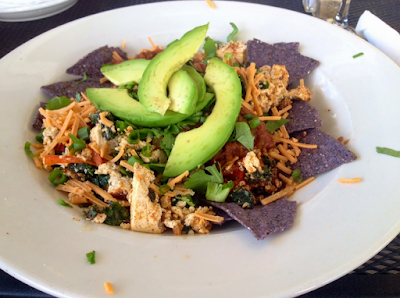 Fuel uses a star-shaped biscuit cutter to make their Biscuits & Gravy!! The gravy is chock full of vegan sausage. On the side is some watermelon. 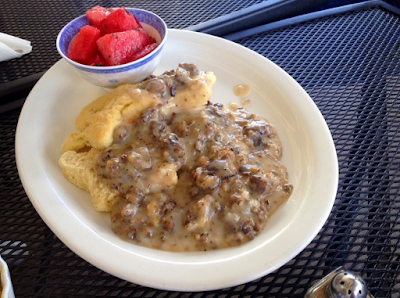 Fuel has a pretty solid Tofu Scramble. It's heavy on flavor and loaded with veggies. 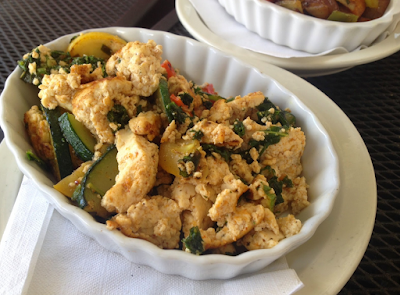 And if you're not feeling tofu-eggy, there are always Vegan Chili Cheese Fries on the brunch menu. Guaranteed to cure what ails you! The chili they use is made with red beans and quinoa. 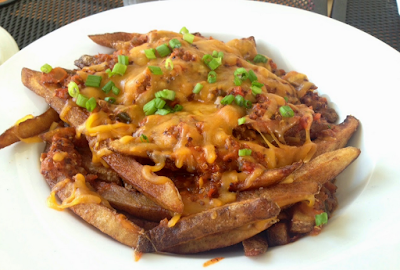 3. 3 Angels on Broad (2617 Broad Ave.)
Located in the Broad Avenue Arts District, this kitschy diner is rather small. So arrive early to grab a table or sit at the bar. You might want to sit there anyway because you'll have easy access to these! This is the Margarita Mimosa — a marg spiked with champagne. 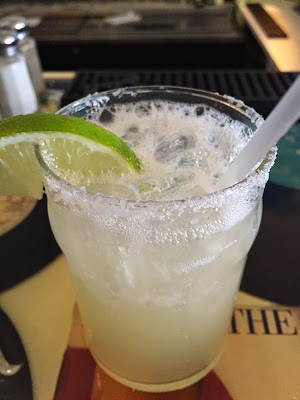 3 Angels isn't totally vegan, but they have a few options, including Tofu Scramble. The scramble isn't as well-seasoned as Imagine's or Fuel's, but it's decent. I do love the mushrooms and red peppers. And they serve you a massive plate. 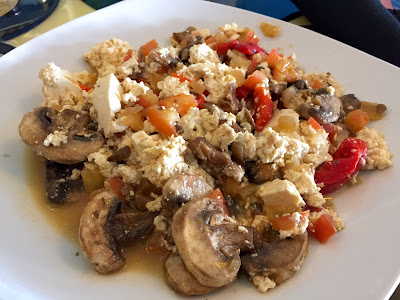 The scramble doesn't come with a side, but they always have a rotating cast of vegan veggie sides to order a la carte. These are the Flat Top Potatoes. Tasty skillet taters with onions and peppers. 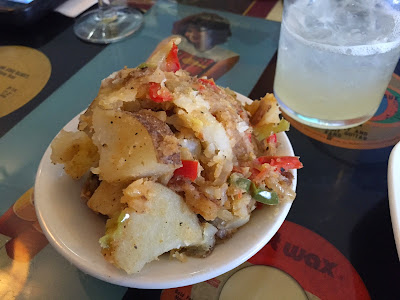 3 Angels also has Vegan Biscuits and Gravy, so check that out if you're in the mood for bread.

4. Brother Juniper's (3519 Walker Ave.)
This University-area diner only serves breakfast! And while the vegan options are slim, they do have a few. And they happen to have the BEST TOFU SCRAMBLE IN TOWN. Yes, that's right. If you're in the mood for scramble, go here. Note: This place is ultra-popular. Expect a good long wait for a table, but enjoy a soy latte from the coffee bar while you wait.

On the menu, you'll see a Veggie Sausage Tofu Scramble. Don't order that. The sausage is not vegan, at least not last time I checked. You could order that without the sausage. But I have a better idea. Trust me on this one — go off-menu and order the Fahim's Special. It's a tofu scramble (pictured below) with portabella mushrooms, roasted red peppers, and green onions. It used to be on the menu, but it contained kalamata olives. And they stopped carrying olives, so they removed the item from the menu. They're still happy to make it, just without olives. Hint: Always carry kalamata olives in your purse for these occasions! 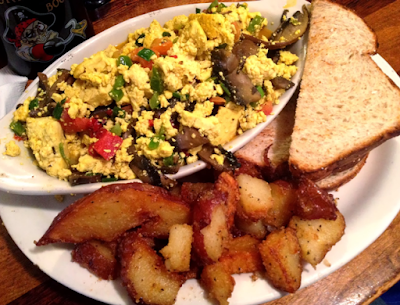 So there you have it! Now go make brunch your bitch!!
Posted by Bianca at 10:45 PM