They're not latkes. Those are usually made with grated potatoes. Delicious too. But mashed potato pancakes are different. I did a little research and couldn't find a decade of origination. But I did see a few websites that said these were popular in the 1940s, which would make sense. During war time, people didn't waste food. So you'd use your leftover potatoes for pancakes!

A couple nights ago, I made a batch of mashed potatoes just for making Mashed Potato Pancakes! 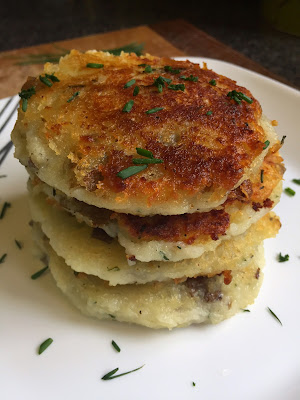 Yum! All you do is take mashed potatoes and add flour until the potatoes form a light dough. Then you scoop up the tater dough and flatten into a pancake. They're pan-fried in canola oil, and I used lots of garlic in the potatoes. Good stuff. I served them with ketchup and applesauce and lots of fresh chives from my herb garden.

On the side, I made Earth Balance Mac & Cheese and some frozen Sweet Peas. This is pure comfort food!! 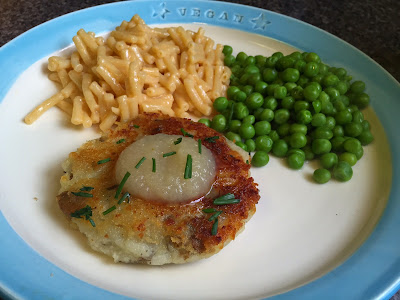 My mom used to make those when we were growing up, and she also made fried cream of wheat.

I've never had them, but they sound great!

I've never had potato pancakes, but as a huge fan of potatoes, I'm sure I would love them. Can't wait for your retro cookbook.

Wow, this is just about my perfect dinner. I need to make these ASAP.

I've been reminiscing lately about a (inauthentic, I'd guess) dish at my favorite Chinese buffet growing up. They served these large round breaded and fried balls of mashed potatoes. So, so good.

These look wonderful, would be a fun dinner.

Yum, these sound great! I especially love that you served them with mac and cheese. Two of my favourite carbs. :)