When I was at Seattle Veggie Fest back in March, I sampled my way through just about every vegan product on offer. On Saturday of the fest, I literally ate enough samples to cover me through two meals. Some were junk food (doughnuts, chips, ice cream). Others were real-meal-style vegan foods (Field Roast burgers, cashew cheeses). And a few were actually really healthy (bars, protein powders).

Of the healthy stuff, the one product that made the biggest impression on me was Manitoba Harvest Hemp Pro70. Y'all know I'm a protein smoothie-aholic, especially when I'm able to run (still mostly down with runner's knee though). And I'm very picky with my powders. I'm a Vega purist, but I'm always willing to try new ones. And I tend to hold them to Vega standards. Manitoba Harvest meets those standards, taste-wise! I made contact with their people at the fest, and later, they sent me some product to review! My kitty Gelfling is helping me out here with the sniff test. 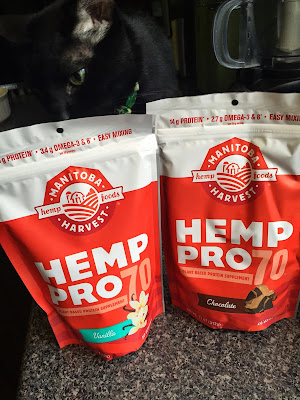 At 15 grams of protein per serving, Hemp Pro70 doesn't have quite as much protein as the new Vega formula. But that's okay right now. I need that high-protein stuff when I'm getting close to race day and going on longer and longer runs. But right now, I'm only doing short, occasional walk/runs and lots of muscle-building, strength sessions for my hips, thighs, quads, and glutes. That's the best prescription for runner's knee, and this Hemp Pro70 powder has been the best thing for my smoothies after my weekly Butts & Guts class at the gym (yes, that's the class name!). All the protein comes from hemp, as you probably guessed by the name.

Not only does Manitoba Harvest's powder have a nice, moderate amount of protein, it's also delicious and makes for a thick and creamy smoothie. The powders are sweetened with organic coconut sugar. And the chocolate is flavored with fair trade cocoa. The vanilla has organic natural flavor. In fact, each powder only has four ingredients! And both powders are only 130 calories per scoop!

I came up with a couple of quick and yummy smoothies using the powders. Here are some recipes! Note: Check out my awesome Grit & Grind glass. That's a Memphis Grizzlies thing. We got beat by Golden State in the NBA play-offs last weekend, but we'll be back next year. 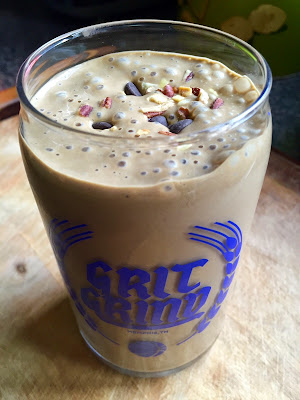 Blend ingredients together in a blender. Enjoy after an awesome workout! 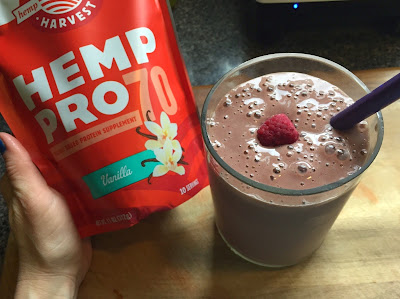 Blend ingredients together in a blender. Enjoy after an awesome workout!
Posted by Bianca at 9:42 PM