If you've read my last couple posts, you'll know that I recently returned from a fun visit to Seattle, where I did cooking demos and signed books at their VegFest, ate way too much food, and hung out with old vegan buds. I posted about all that yesterday and last Thursday. But tonight, I'm posting about my last day in Seattle and my unfortunate flight home.

I was supposed to fly out of Seattle at 2:30 p.m. on Monday, so I woke up in my room and heated up my leftover Vegan Country Fried Steak and Biscuit from Wayward Vegan Cafe. Thankfully, my room was equipped with a microwave and mini-fridge. I had a few hours to kill, so I walked down to the Space Needle, which was just a couple blocks from the hotel. After a short wait in line and a cramped elevator ride, I was at the top! 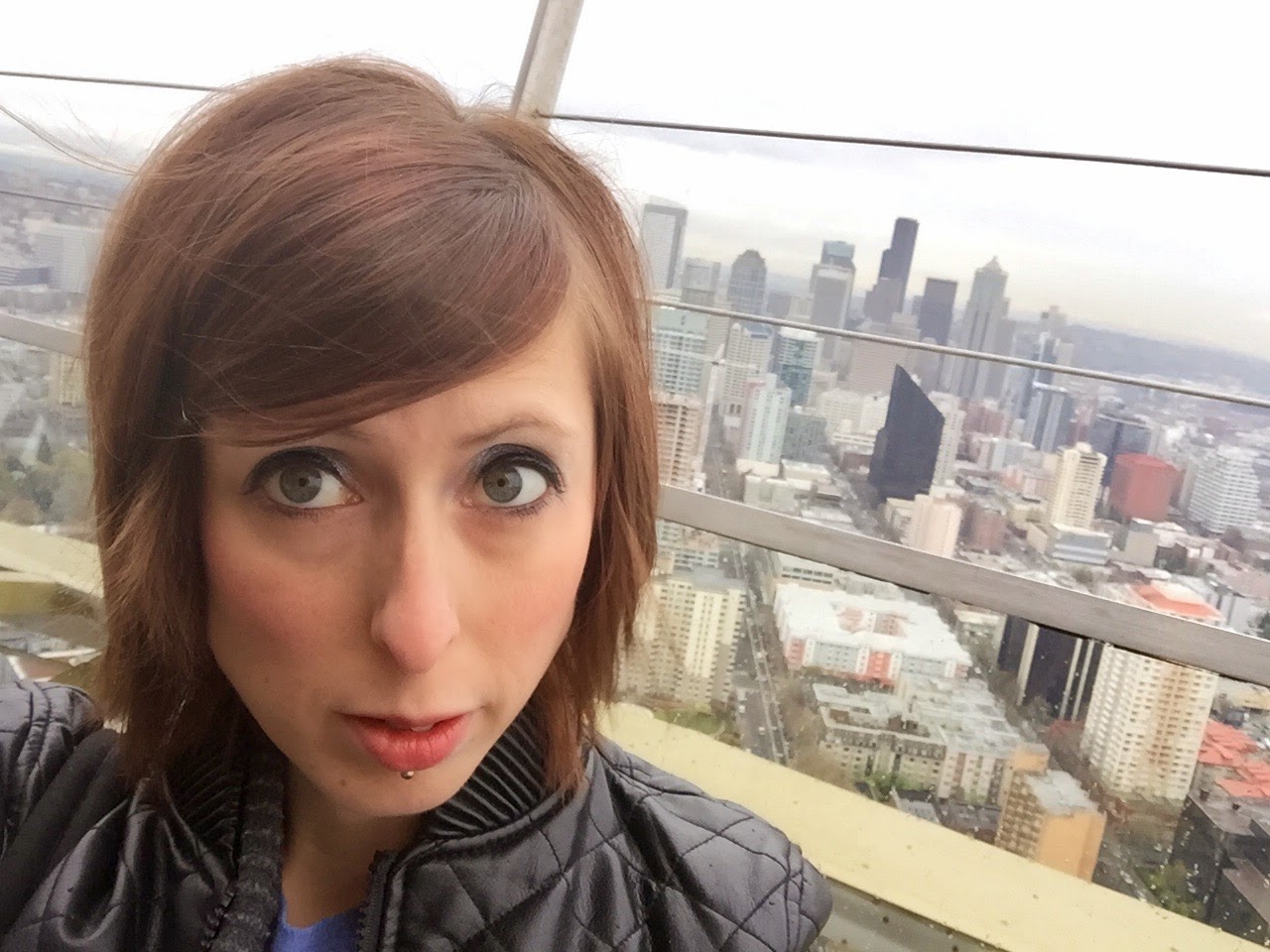 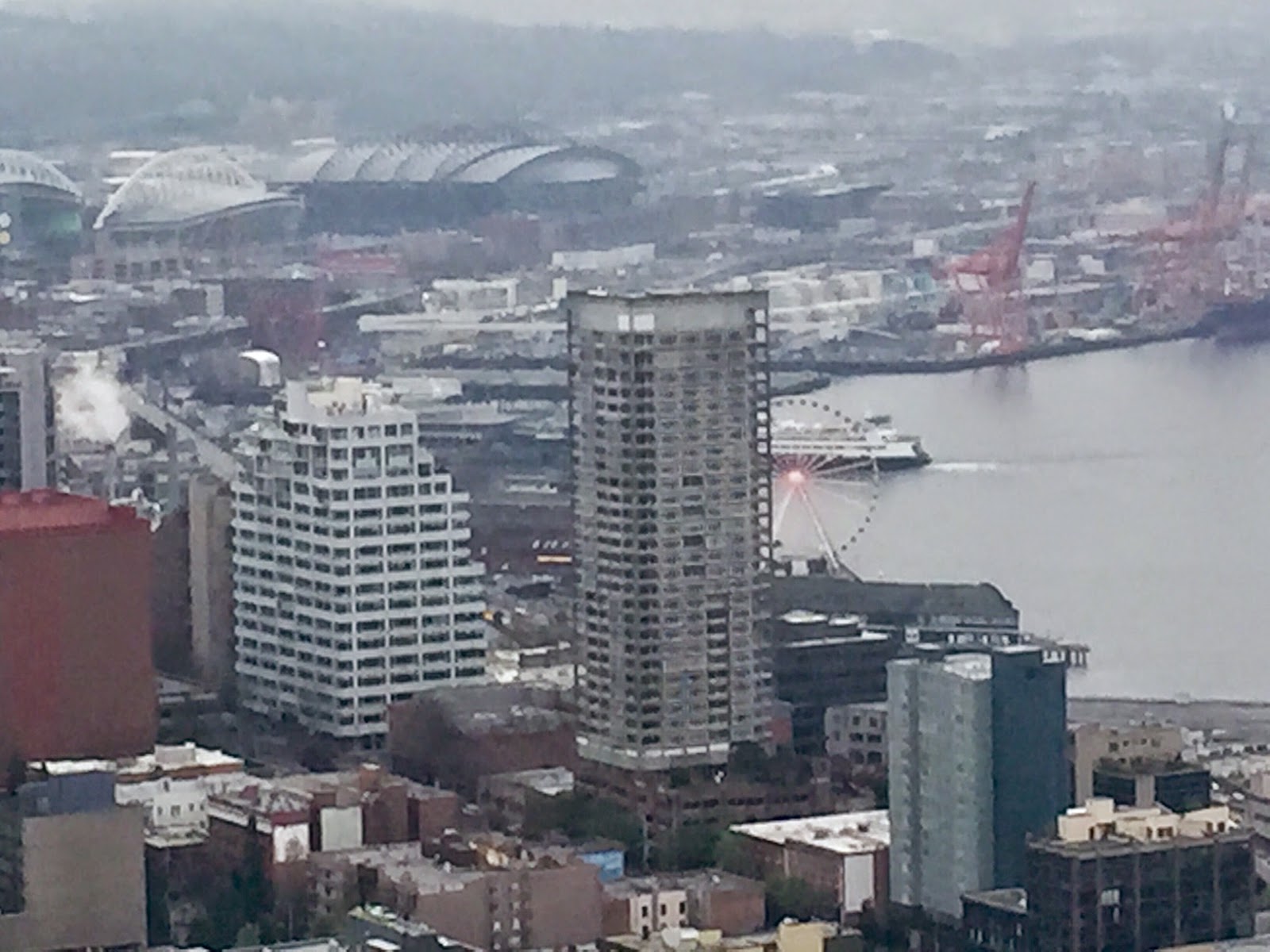 While I was in the Space Needle, Rhiannon (Book Pub Co's marketing guru, who was also flying to Memphis but on an earlier flight) texted me to tell me her connecting flight in Chicago was delayed until 9 p.m. because it was snowing there. I started to panic, thinking my flight might also be canceled. But I checked the Southwest website, and everything seemed a-okay.

So I headed to the airport. I didn't really have time for lunch, but I did snack on this Northwest Couscous Salad from a stall at the Sea-Tac Airport. It was really good! Couscous, chickpeas, hazelnuts, celery, apricots, carrots, currants, and lemon dressing. 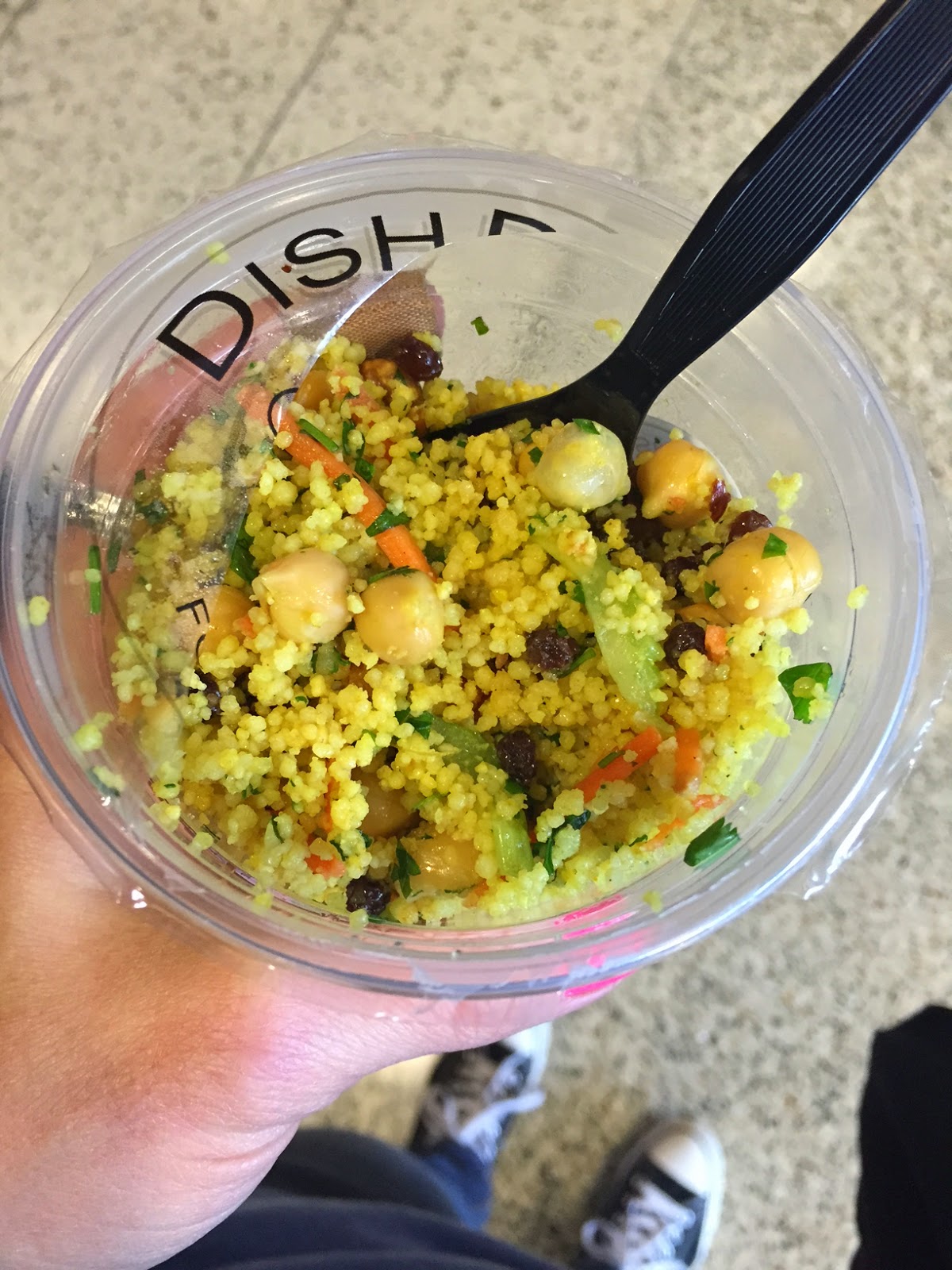 While I munched on this at my gate, an attendant announced that weather issues in Chicago were causing delays. He said our flight from Seattle to Chicago would be delayed by 30 minutes to an hour. Sigh. Well, I waited and finally boarded.

The four-hour flight was pretty boring, but I had lots of snacks to keep me busy, including this yummy Vegan Club Sandwich that I'd picked up at the Vegan Haven grocery store the day before — Tofurky, vegan ham, tempeh bacon, vegan mayo, lettuce, and tomato. YUM! 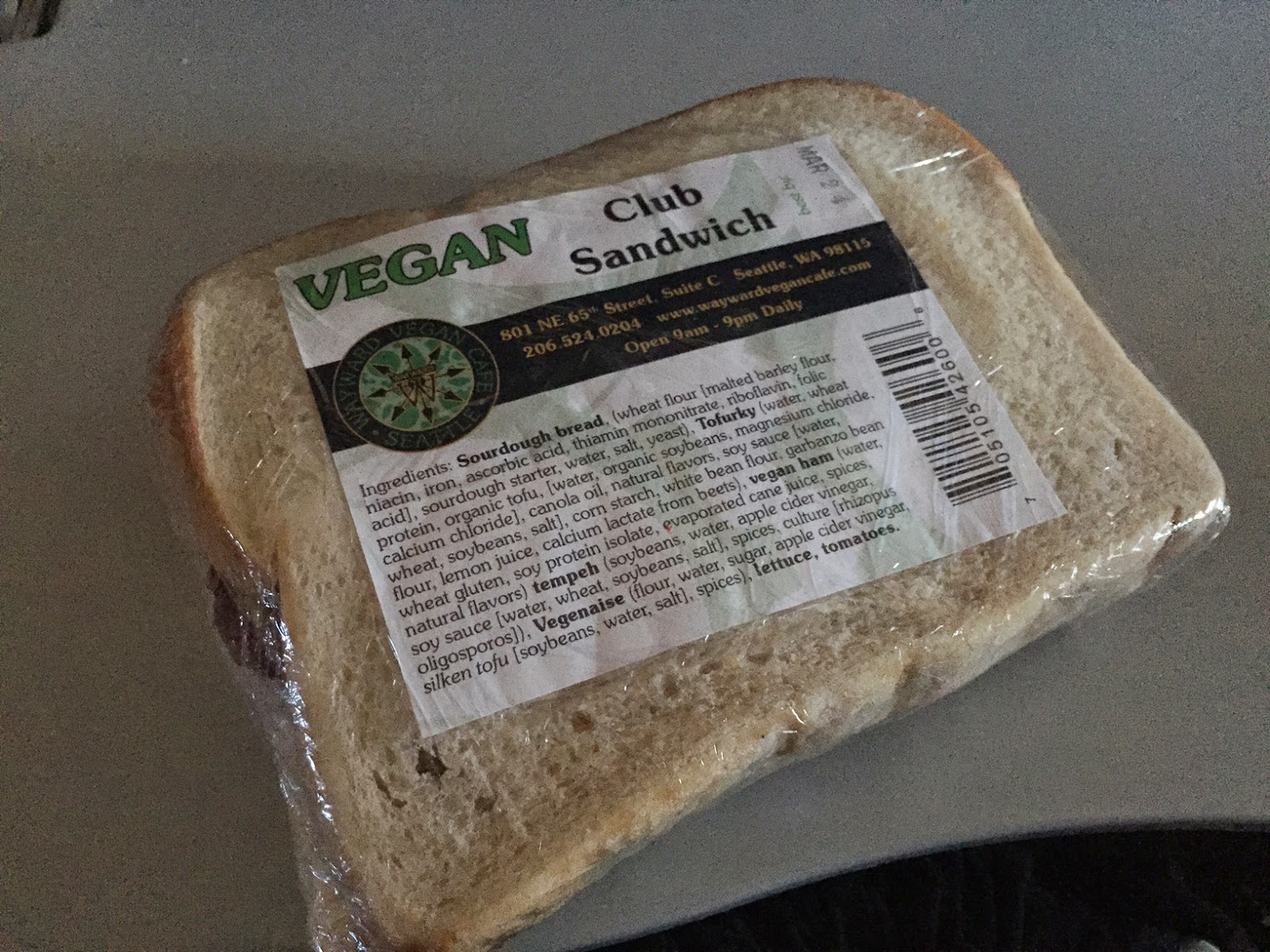 When we finally landed, texts started rolling in from Rhiannon. Her delayed flight — the same flight I was supposed to be on — was canceled. And it was the last flight of the night! Several other people from Memphis were on my flight, and we all waited at the customer service desk for instructions. I overheard an attendant telling a Memphis dude in front of me that she didn't have any available Memphis flights until Wednesday afternoon. This was MONDAY NIGHT! Yea, I cried a little bit. And the Southwest man who helped me was super-nice, and somehow, he magically found room for me on a 9 p.m. flight leaving Tuesday night — a full 24-hours after my scheduled flight. But it was the same flight Rhiannon and Phorest had been moved to! Luck!

Also luckily, Rhiannon has family in a suburb outside of Chicago. And a scary (and very expensive) cab ride later, I was safe at her aunt and uncle's house, sleeping on a pallet in the floor. They were so nice to let us stay there!

When Rhiannon, her partner Phorest, and I woke up Tuesday morning, we walked through the snow — and all I had was a light Seattle/Memphis-appropriate jacket — to the nearest Starbucks. I found this Hearty Veggie & Brown Rice Salad Bowl. It was all vegan EXCEPT for honey in the dressing. I don't typically eat honey, but in situations like this ... 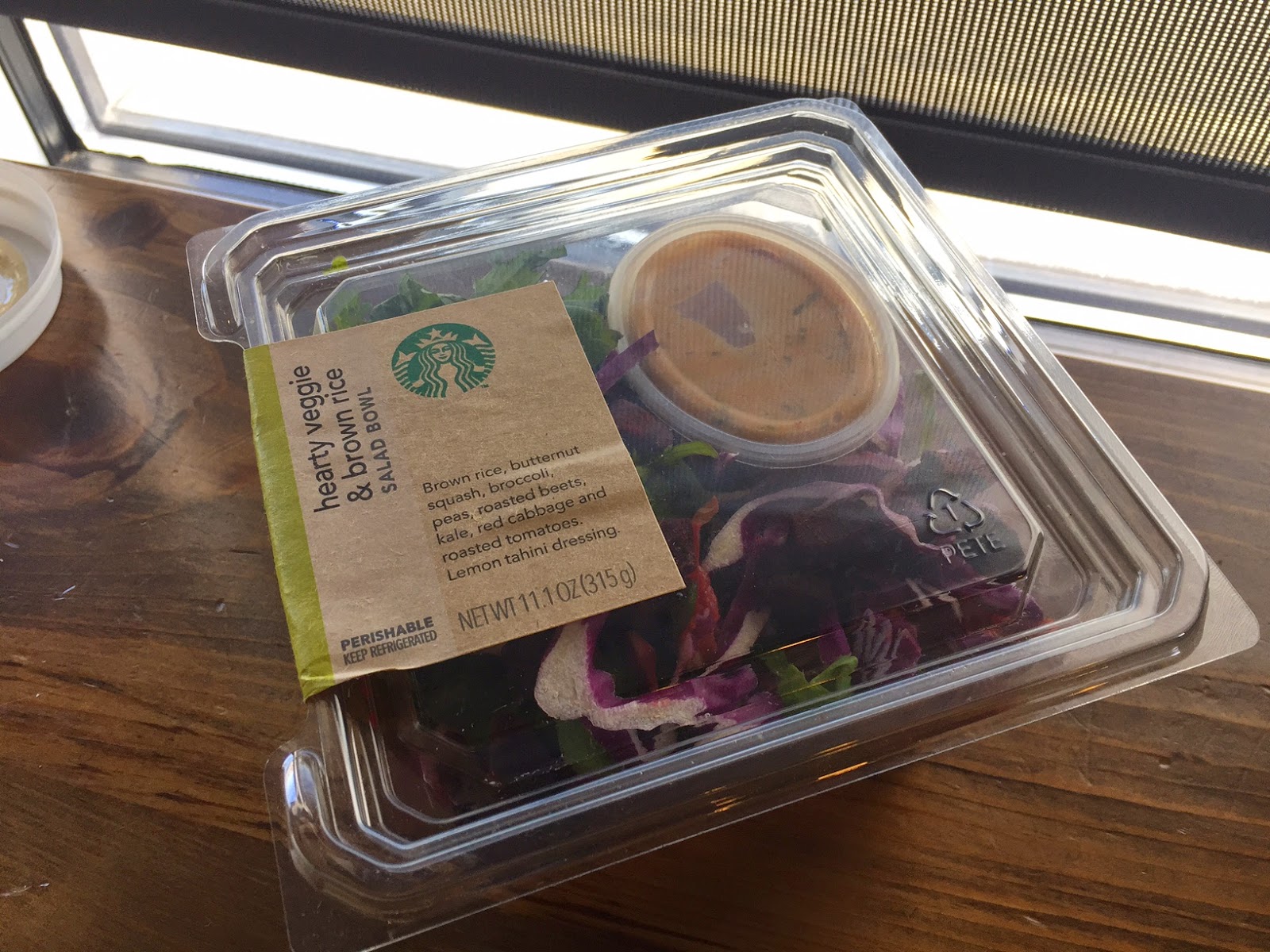 It had brown rice, roasted tomatoes, green peas, corn, and all sorts of goodness. It was nice to get some veggies in after going junk food-crazy in Seattle. Across from the Starbucks was a Target (like I said, this was the burbs), so we walked over and got some more food to heat up at her aunt and uncle's house. Lunch was cans of Amy's Alphabet Soup and Salad. 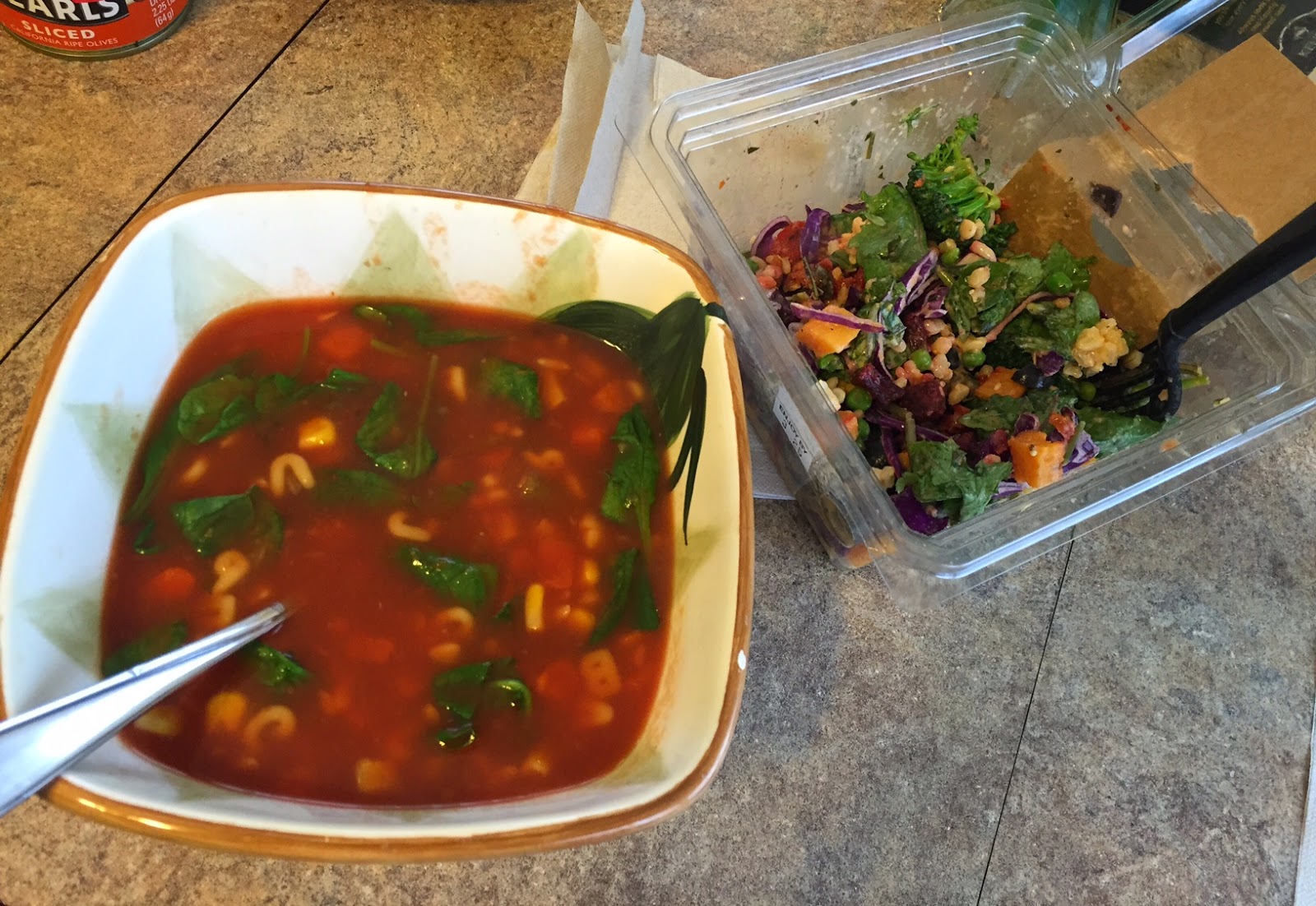 It would have been nice to check out Chicago while we were in town, but we were quite a ways from downtown. And we didn't really need to spend more money on cab/ridesharing fare. So we visited with Rhiannon's family until it was time for her uncle to drive us to the airport.

Once there, we needed booze and dinner. I found some wine and Ma Pao Tofu from King Wah Express in the Midway airport. Not the world's greatest tofu but not bad either. Oh, and the fortune cookie was vegan! That so rarely happens! 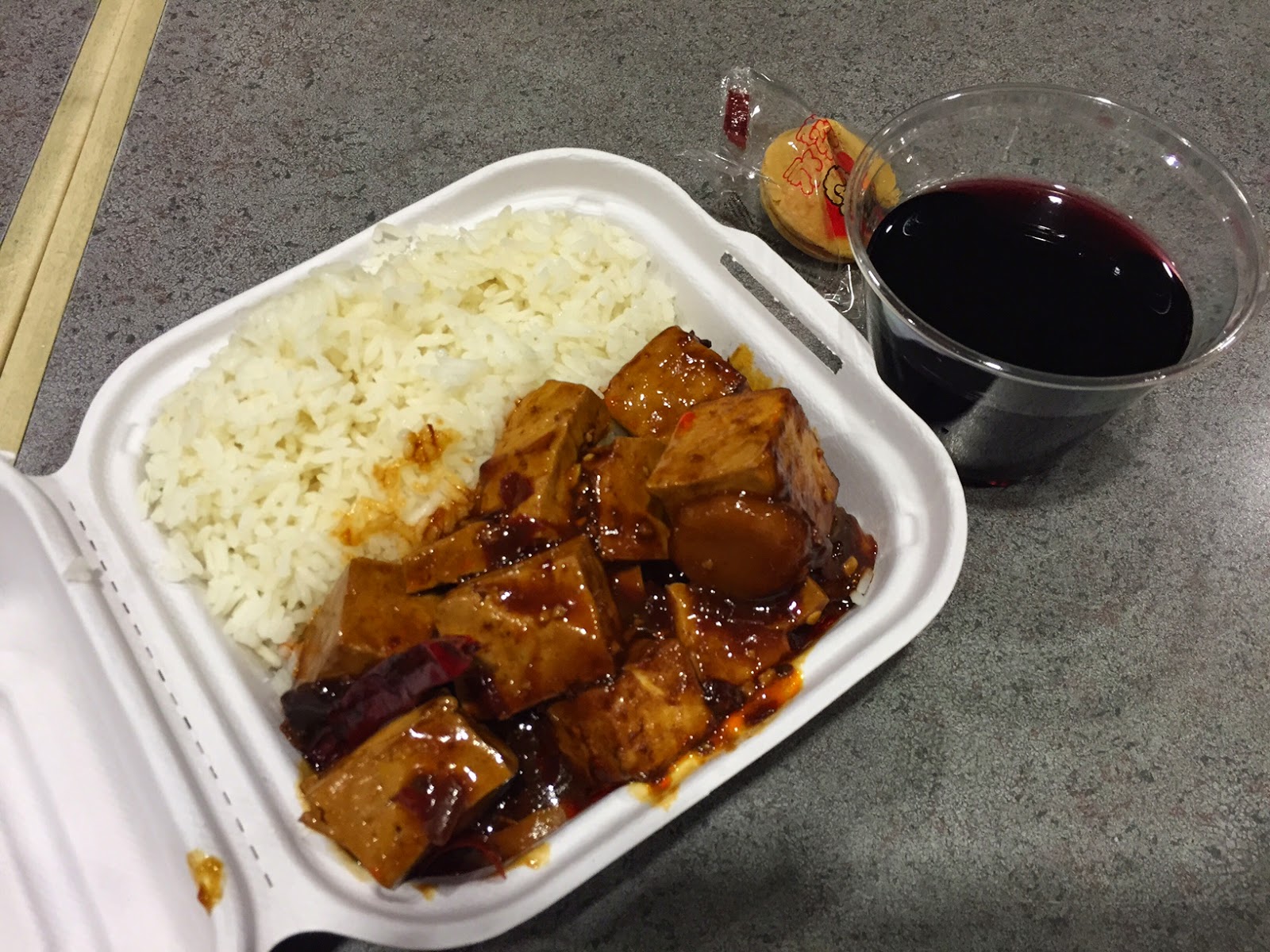 The flight home from Chicago to Memphis is a short one, just an hour in the air. But we were pooped and so grateful to be heading home. Here's Rhiannon and Phorest on the plane — tired but glad to be almost to Tennessee. 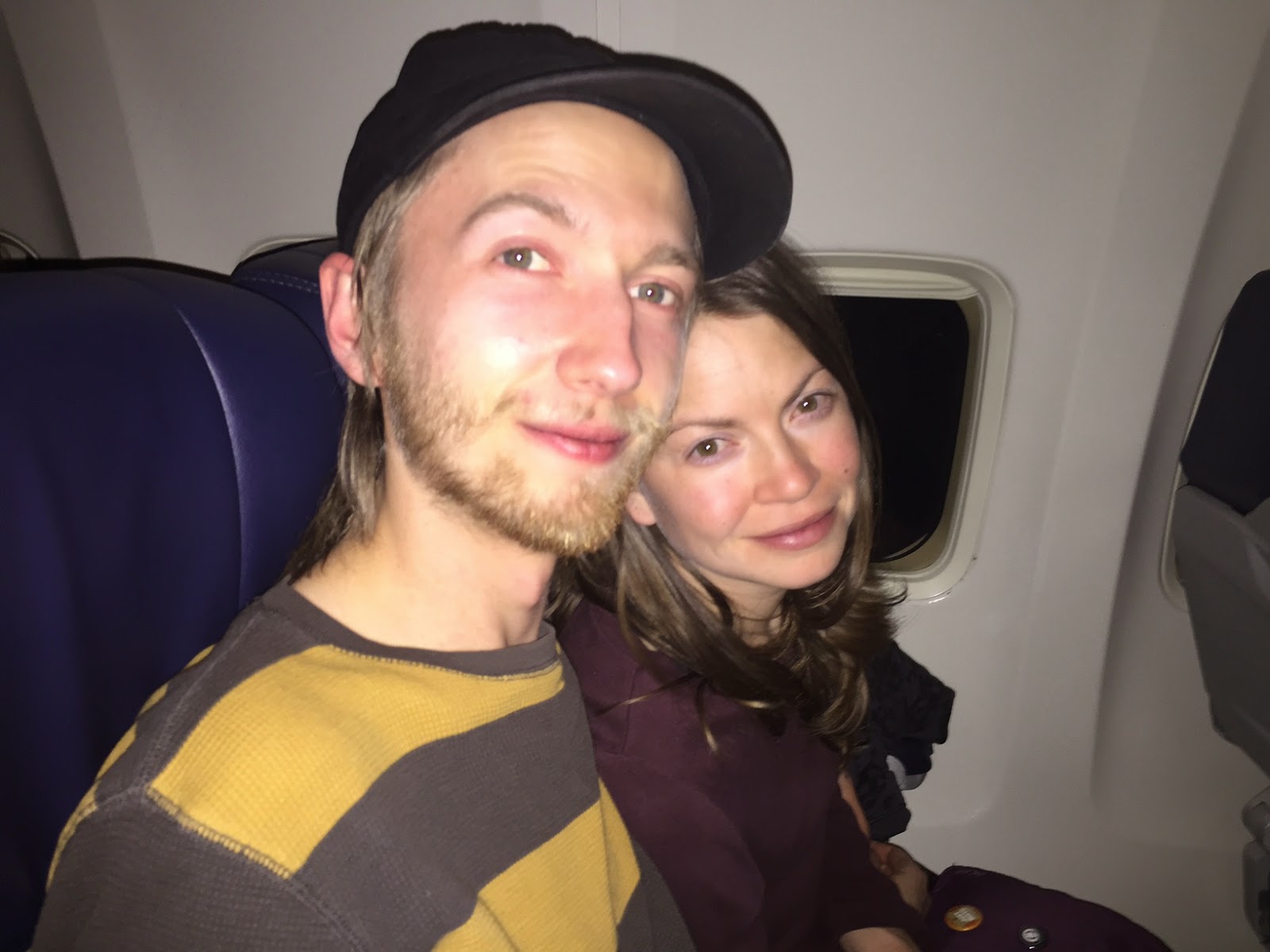 Well, we made it back. I don't do well when plans don't go as planned, but I was glad to be with friends through the whole ordeal. And I'm super glad to be home. I don't think I'll be flying again for awhile, especially through Chicago in winter or early spring!
Posted by Bianca at 10:55 PM

Glad you got home safe, it sucks being unprepared -for winter conditions especially!- with a delayed flight, at least you had good company :)

Oh god, i don't know what I would have done in yr situation!! travelling is SO stressful to me, even under the best conditions. It's lucky you were with friends and had a place to stay!

That would have stressed me out so much! It was good that you had a place to stay. Terrible about not having a jacket for the snow! Glad you are home and safe now.

Wow, that's really crazy. I was flying to Chicago the exact same day. I was on my way home from Vacation in Belgium and we had a connecting flight in Philly. We thought our flight to Chicago would get cancelled due to weather but it was right on time, and when we landed at O'Hare at 7:30pm everything seemed fine, hardly any snow compared to typical Chicago standards.

I've never flown through Midway before, but it's a smaller airport, less plane traffic, that's probably why you had the cancellation. It totally sucks but luckily you had someone to bunk with for the night =)

Last year when we were coming home from Costa Rica in Feb, bad weather in Chicago delayed our connecting flight from Miami for nearly 6 hours. Travel can be so stressful!