My whole reason for going to Seattle last weekend was to do a couple of cooking demos and booksignings at Seattle VegFest. My publisher — Book Publishing Company — sent me and a few other authors. This was my second year demo-ing at Seattle VegFest! For a recap of what I ate on Friday (the day I arrived in Seattle), see my last post. This will be a recap of what I ate before, during, and after VegFest on Saturday and Sunday.

Our hotel, The Inn at Queen Anne, was surrounded by adorable coffee shops, so I tried to hit up a new one each day. Saturday morning started with this Orange Mocha Soy Latte from Caffe Ladro, definitely my favorite latte of the trip! 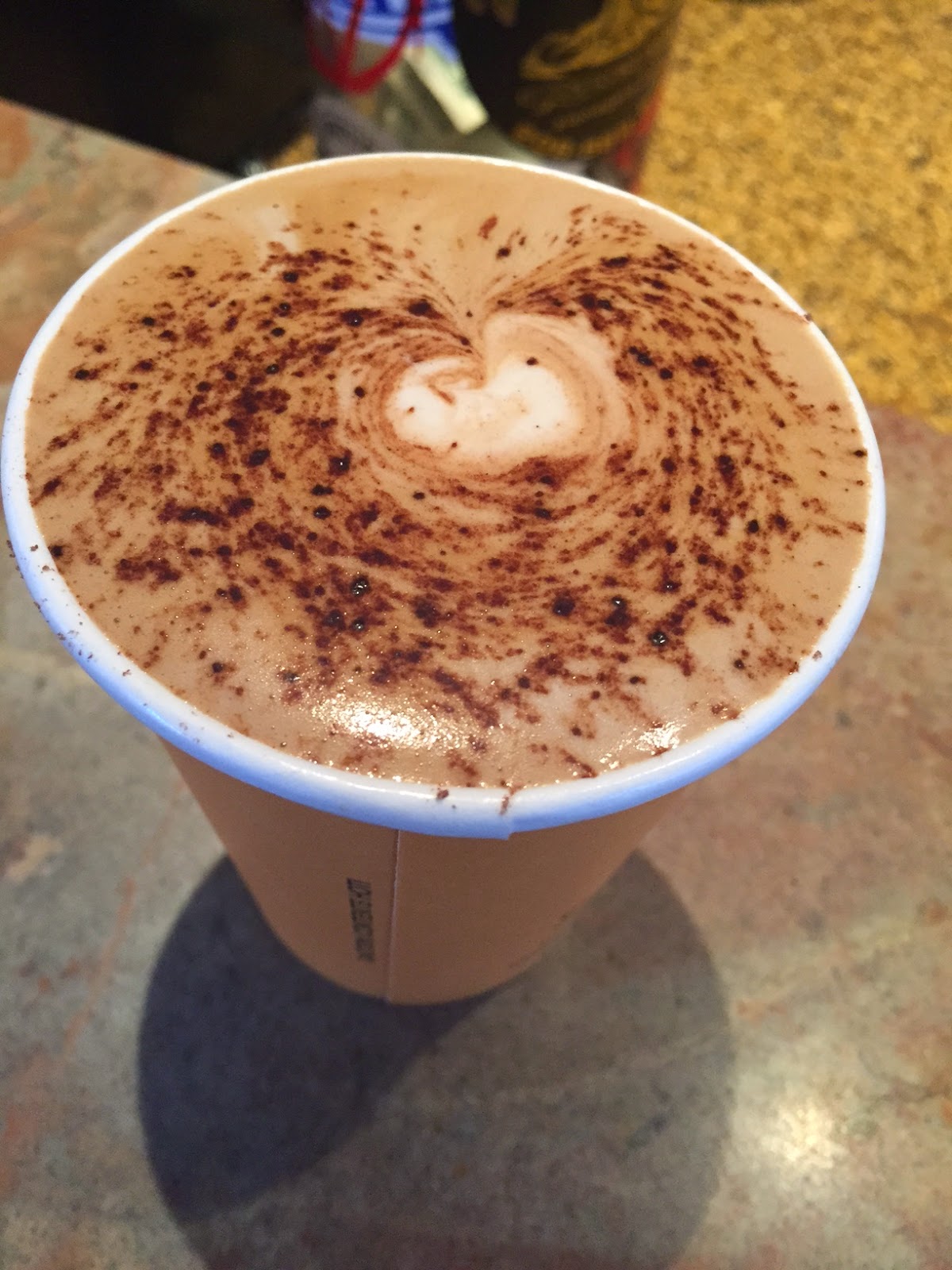 I arrived at VegFest a little early and began prepping for my noon demo. But since I was so early, I had lots of time before the demo to wander around and sample food. My favorite booth was, of course, the Mighty-O Donuts table. They were stocked with mini donuts all weekend. I ate my fair share. 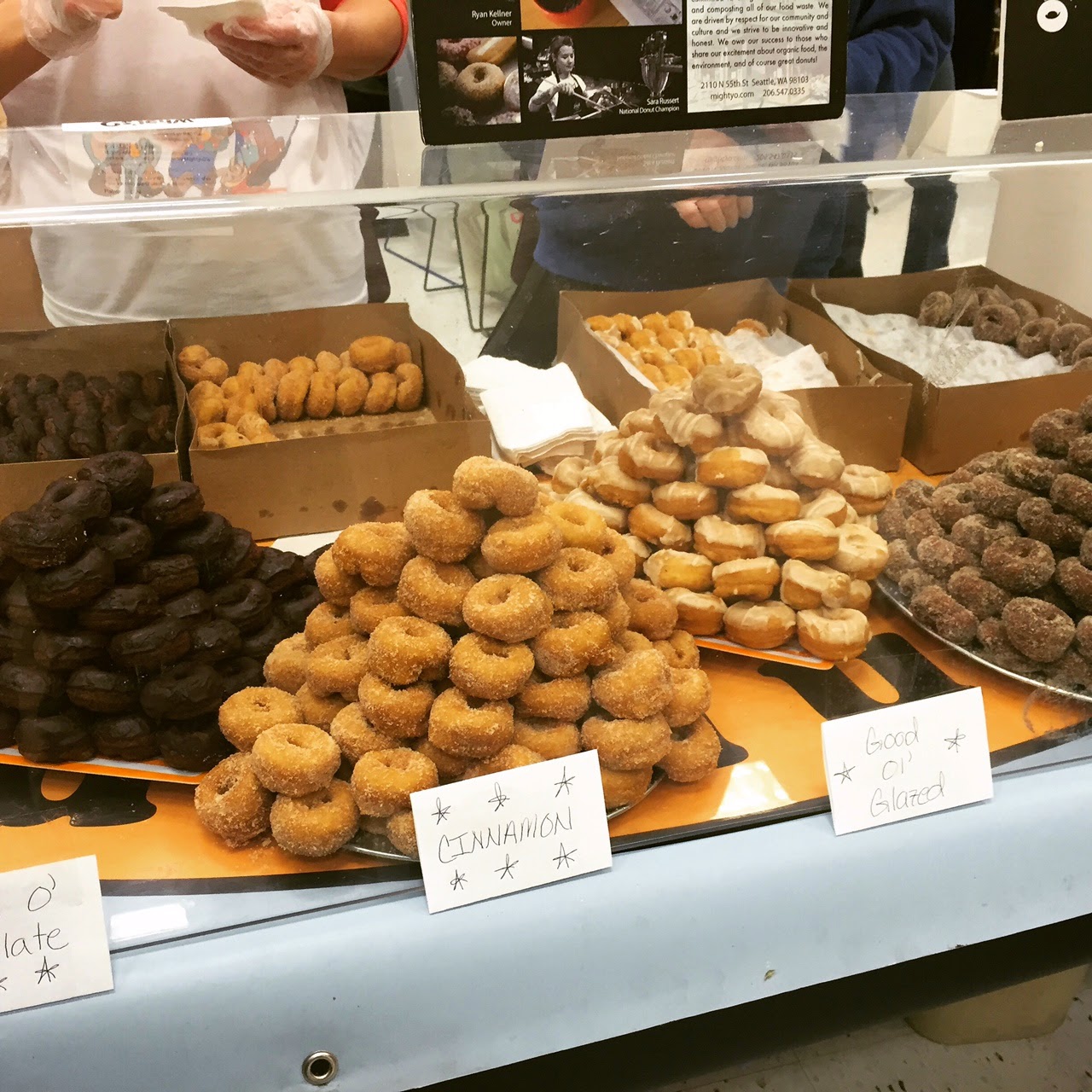 Miyoko was there sampling her amazing line of Miyoko's Kitchen aged cashew cheeses! And she did cooking demos and booksignings. 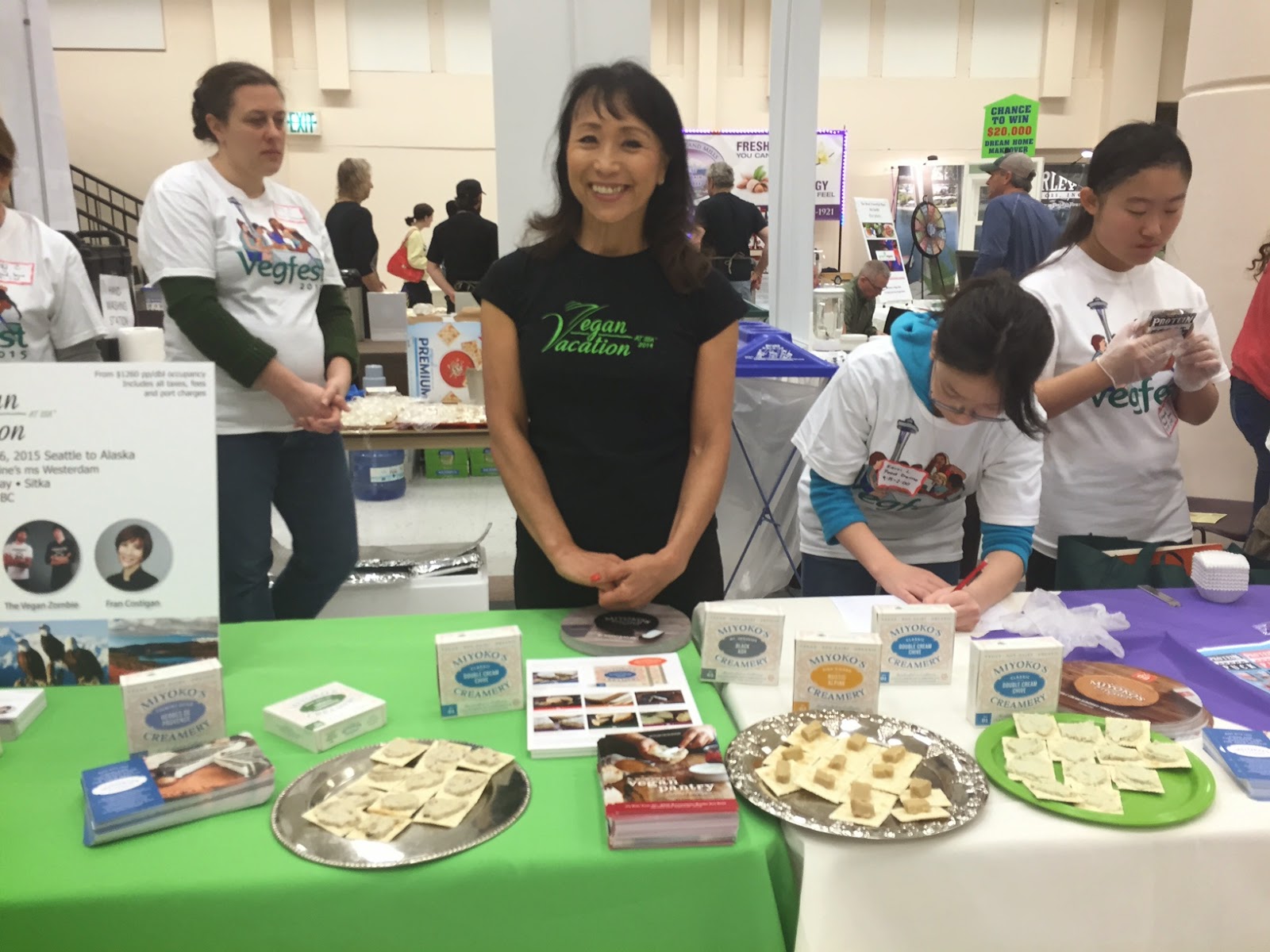 Speaking of cheeses, I was mega-impressed with samples from the Vtopian Artisan Cheese booth. They were also serving up nut-based cheeses, but they had crazy awesome flavors, like Mapled Seitan Cheeseball and Caramelized Onion Camembert! I had never heard of Vtopian before, but I'll definitely be ordering some cheeses from their website! 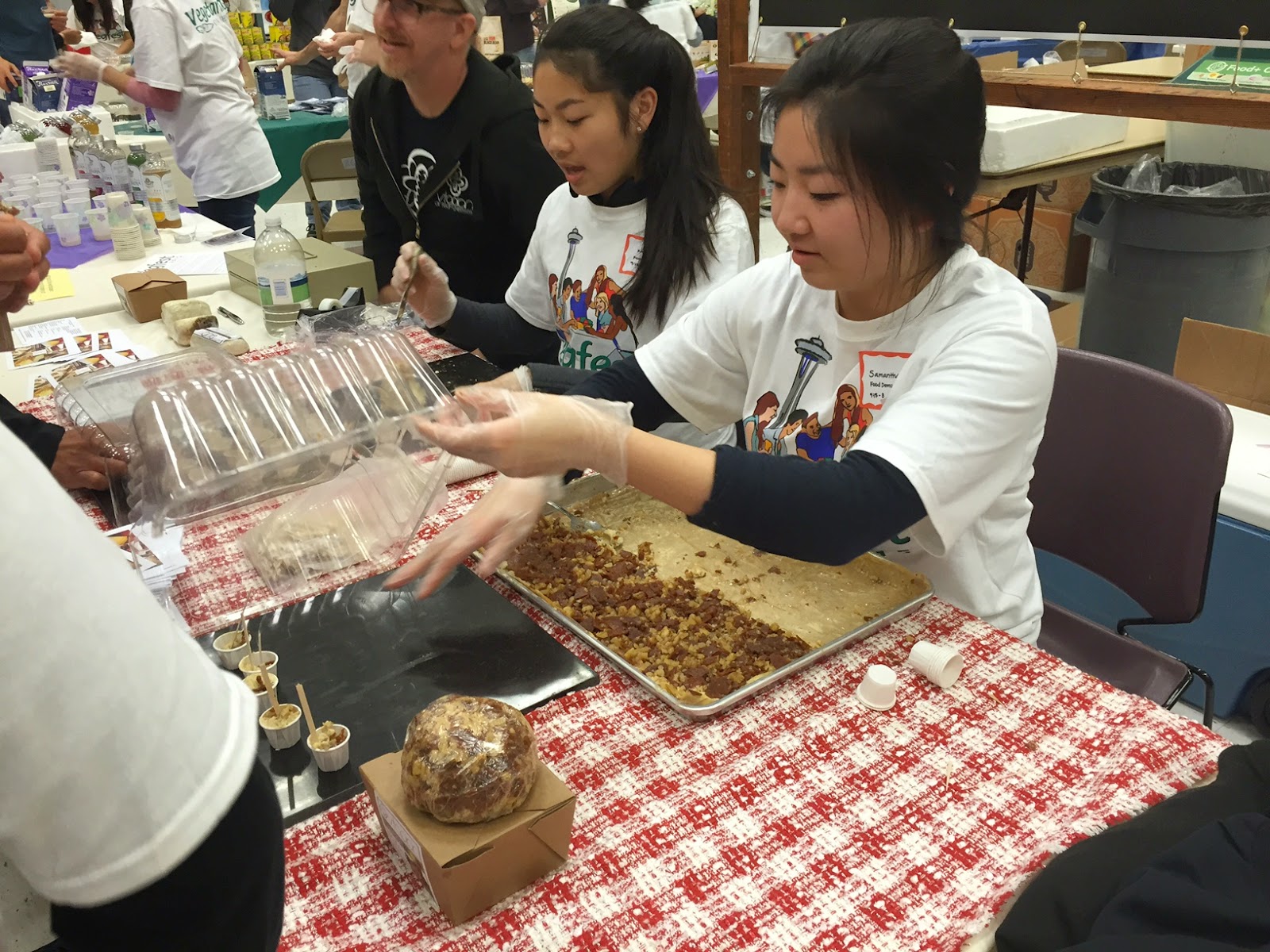 Another favorite new (to me) product was Manitoba Harvest's Hemp Pro 70 protein powder! I love my protein powders, and this one — available in Original, Vanilla, and Chocolate — was so creamy and naturally sweet. And it has 20 grams of protein. They gave me a TON of samples to take home! 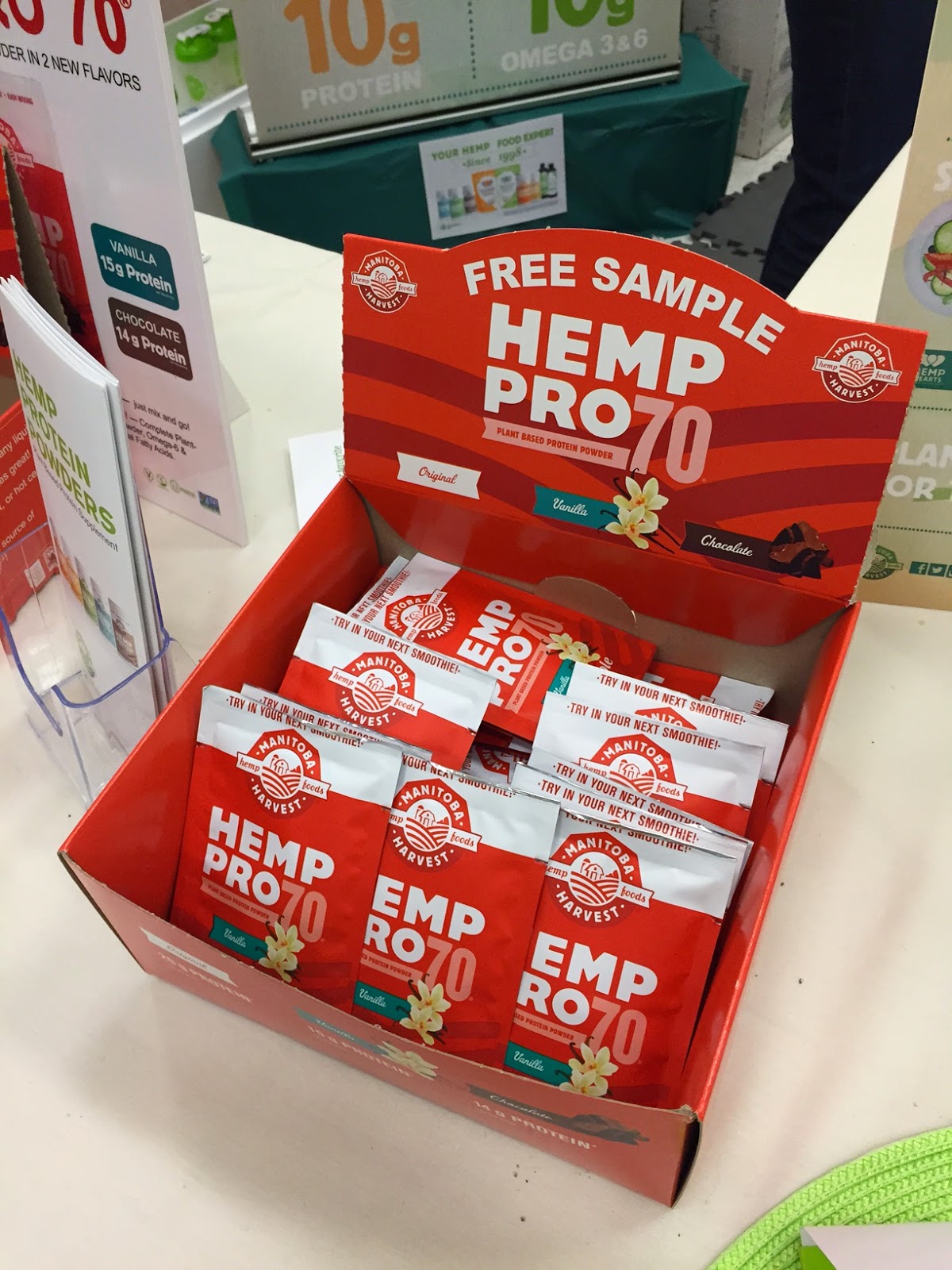 After sampling my way around the fest, I headed back to the cooking stage to demo the Vegan Pimiento Cheese and Butter Bean Bruschetta from Cookin' Crunk. Before I got started, I met blog reader Azure! 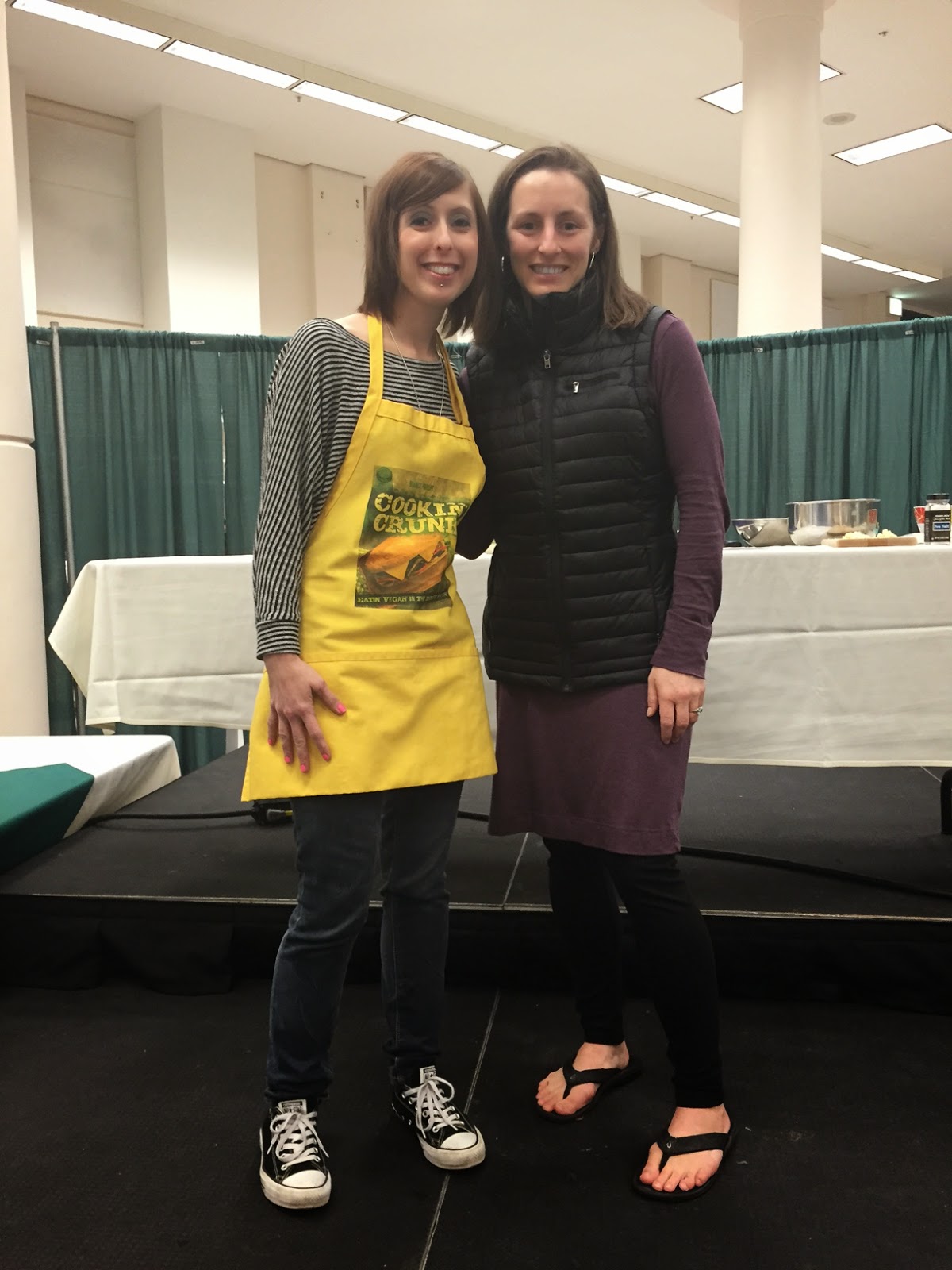 After my demo, I went straight to the booksigning table. And after I signed a few copies, I noticed someone familiar walking around. It was Heather from Memphis! She just moved to Seattle a few months ago, and I hadn't even heard. So I was super-surprised to see her. Heather used to work at Imagine Vegan Cafe. 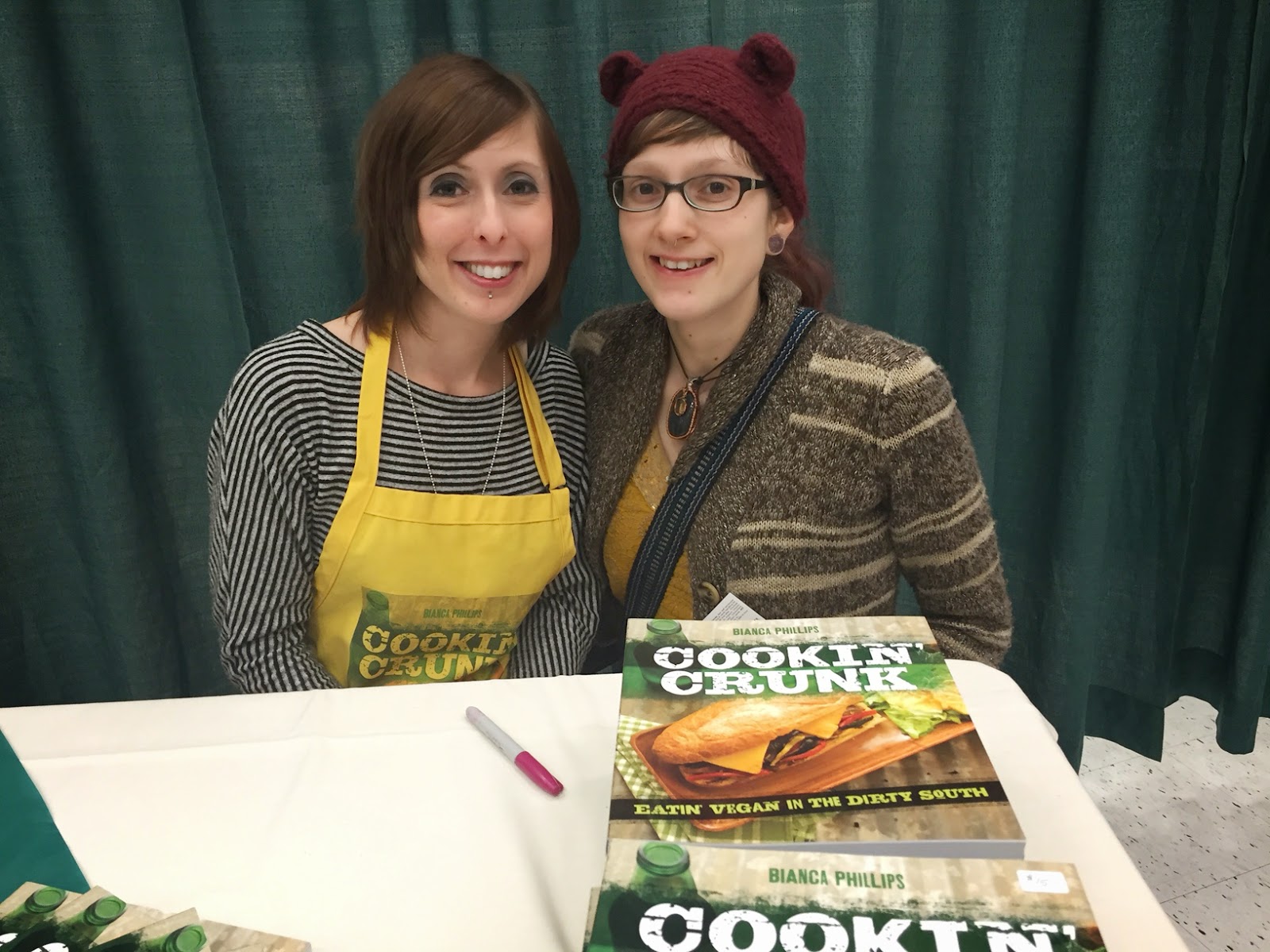 So Delicious was there handing out free ice cream bars. I enjoyed this Mocha Almond Fudge Bar while signing copies of my book. 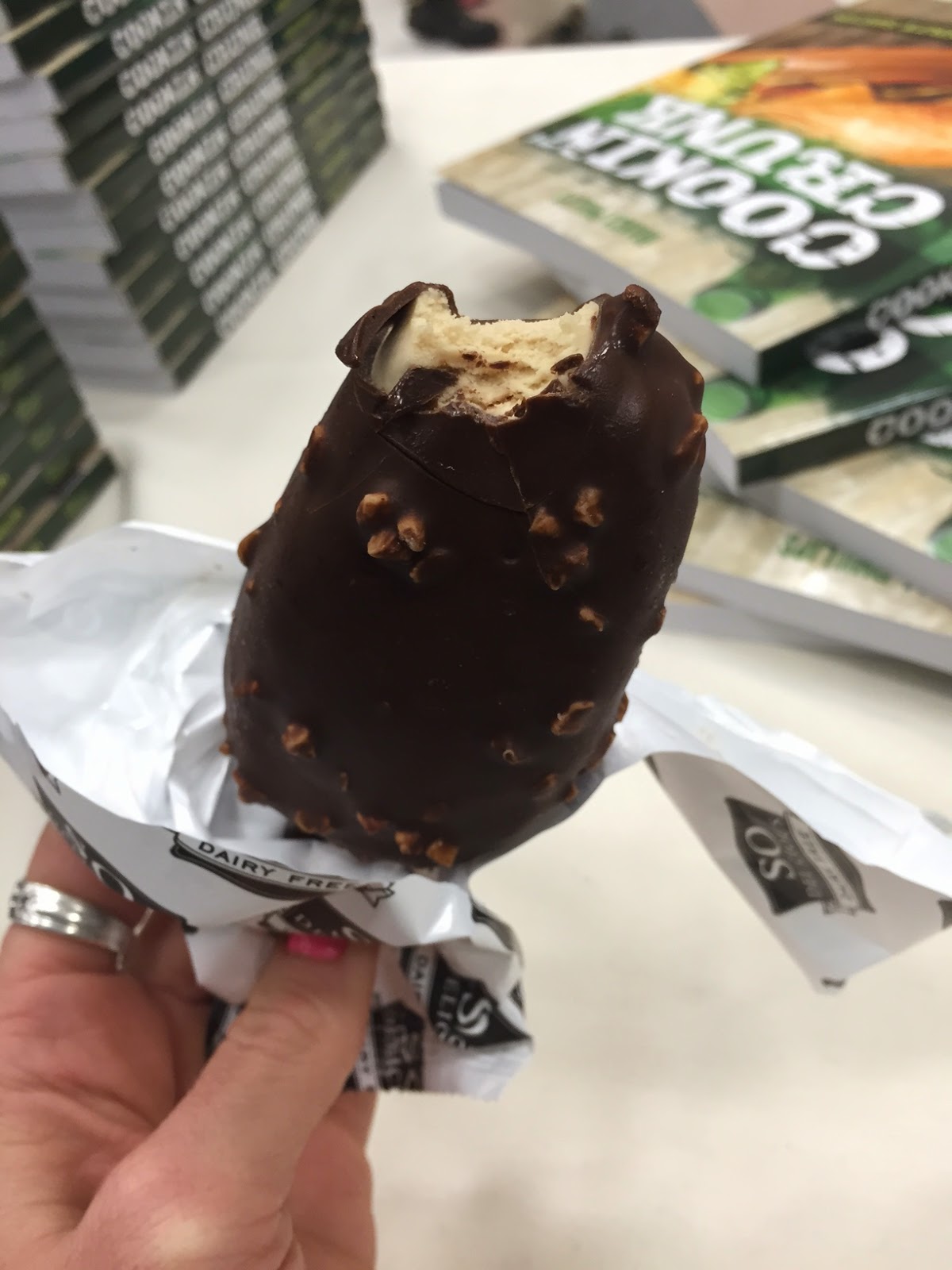 After the signing, I wandered around and ate more samples. I basically made a lunch out of samples! And I spent the rest of Saturday hanging around BPC's book sales table with Bob (the boss man) and Rhiannon (the marketing guru). 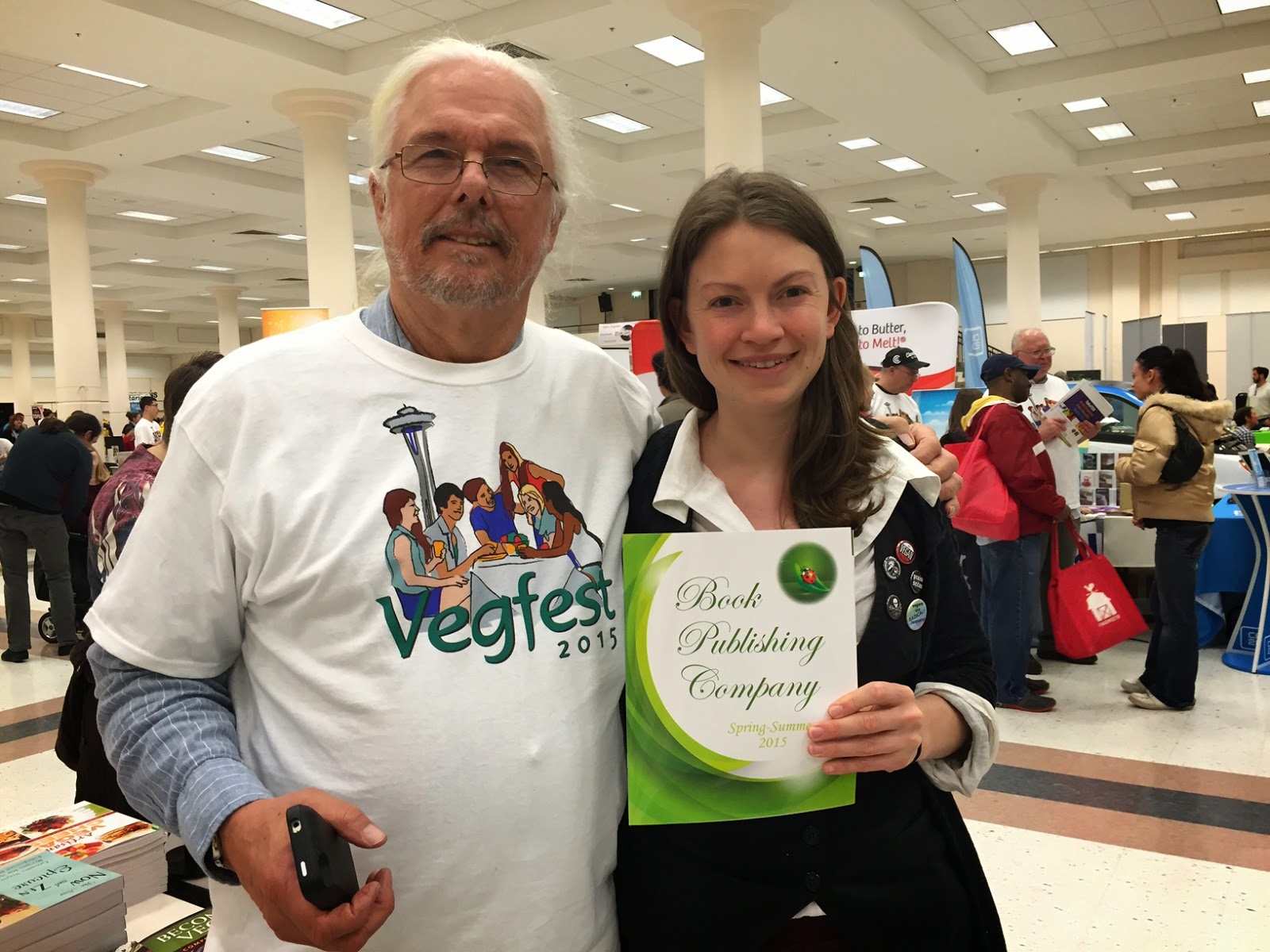 BPC also sent Sproutman (a.k.a. Steve Meyerowitz) to VegFest. I didn't get a chance to hear his talk, but I did buy his Kitchen Garden Cookbook because it's filled with recipes using sprouts, including recipes for homemade sprouted grain bread. I'm gonna try it soon! 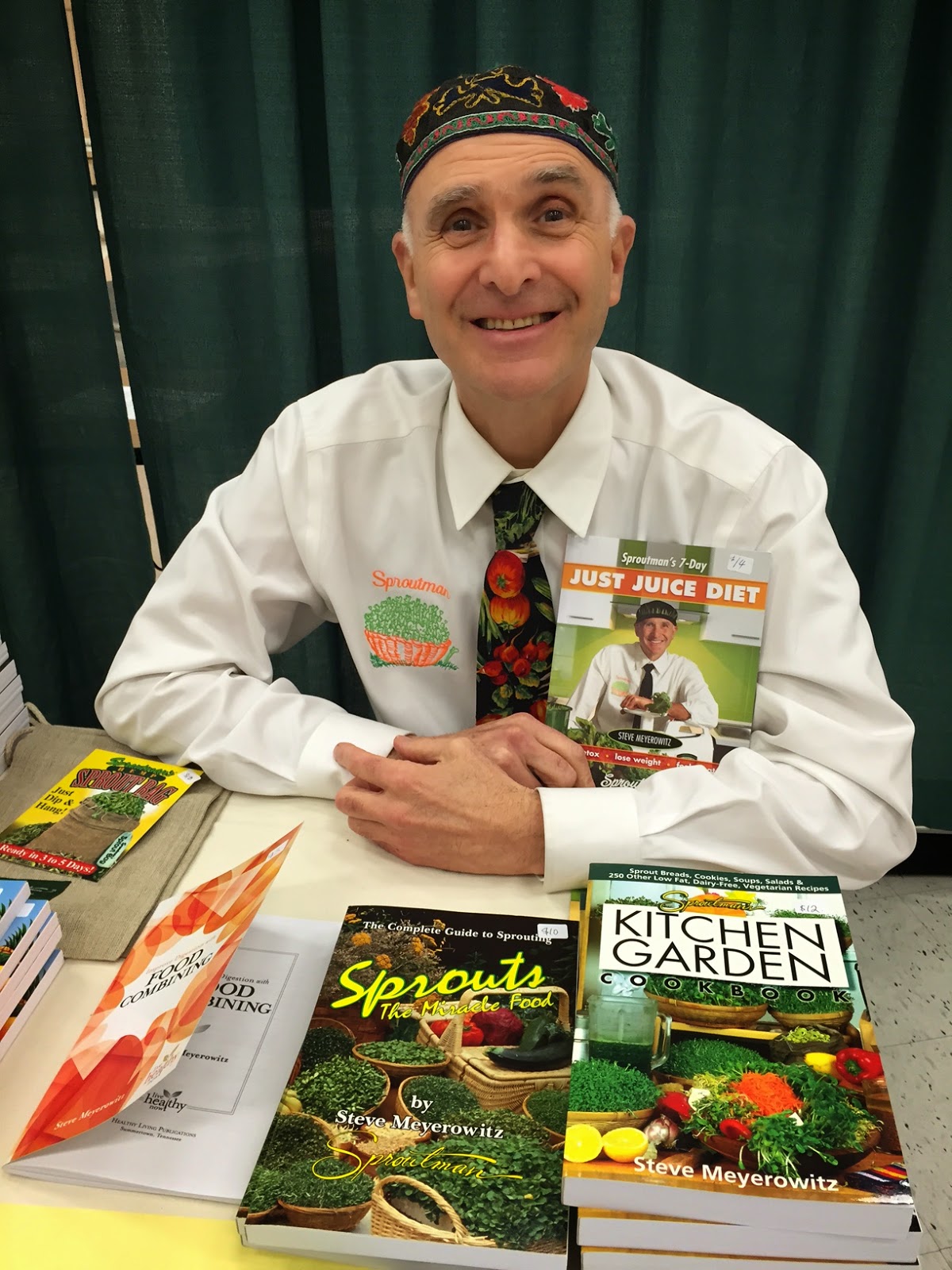 After VegFest ended on Saturday, the BPC crew — Bob, Rhiannon, Phorest, Sproutman, Chat Mingkwan (author of Buddha's Table), and myself — headed to Bob's very favorite Seattle restaurant, Sunlight Cafe. It's a vegetarian restaurant with lots of vegan options, and they're kinda famous for their ridiculously amazing tempeh. We ate there last year too, and everyone was just blown away by how awesome the tempeh was. Last year, I had it in a sandwich. But this year, I got the Tempeh Tacos with brown rice, black beans, guac, and salsa. You can't see the tempeh here, but trust me, it's there and it's insane. 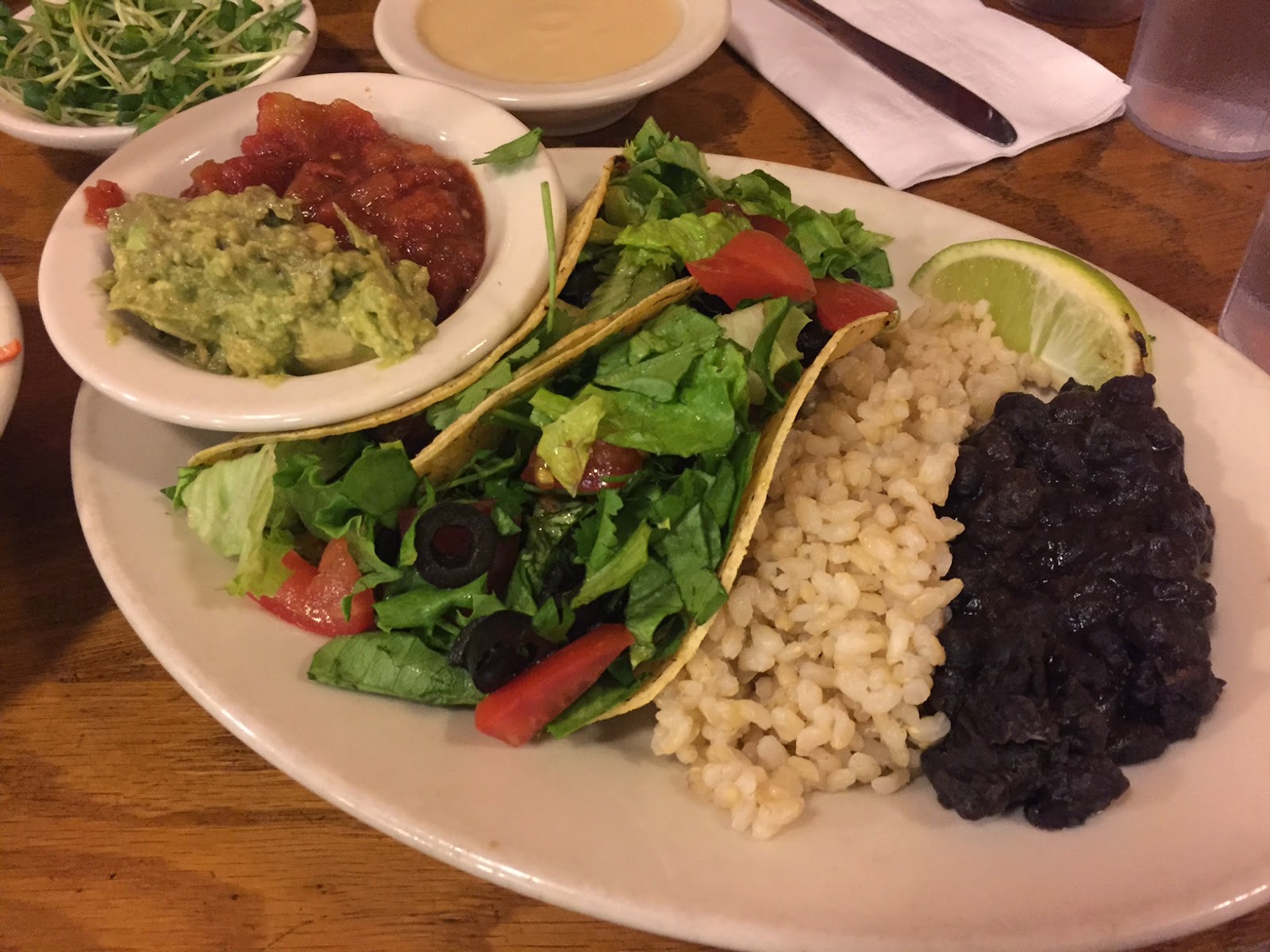 On the side, I had a Salad with Lemon-Tahini Dressing. Love their dressing! 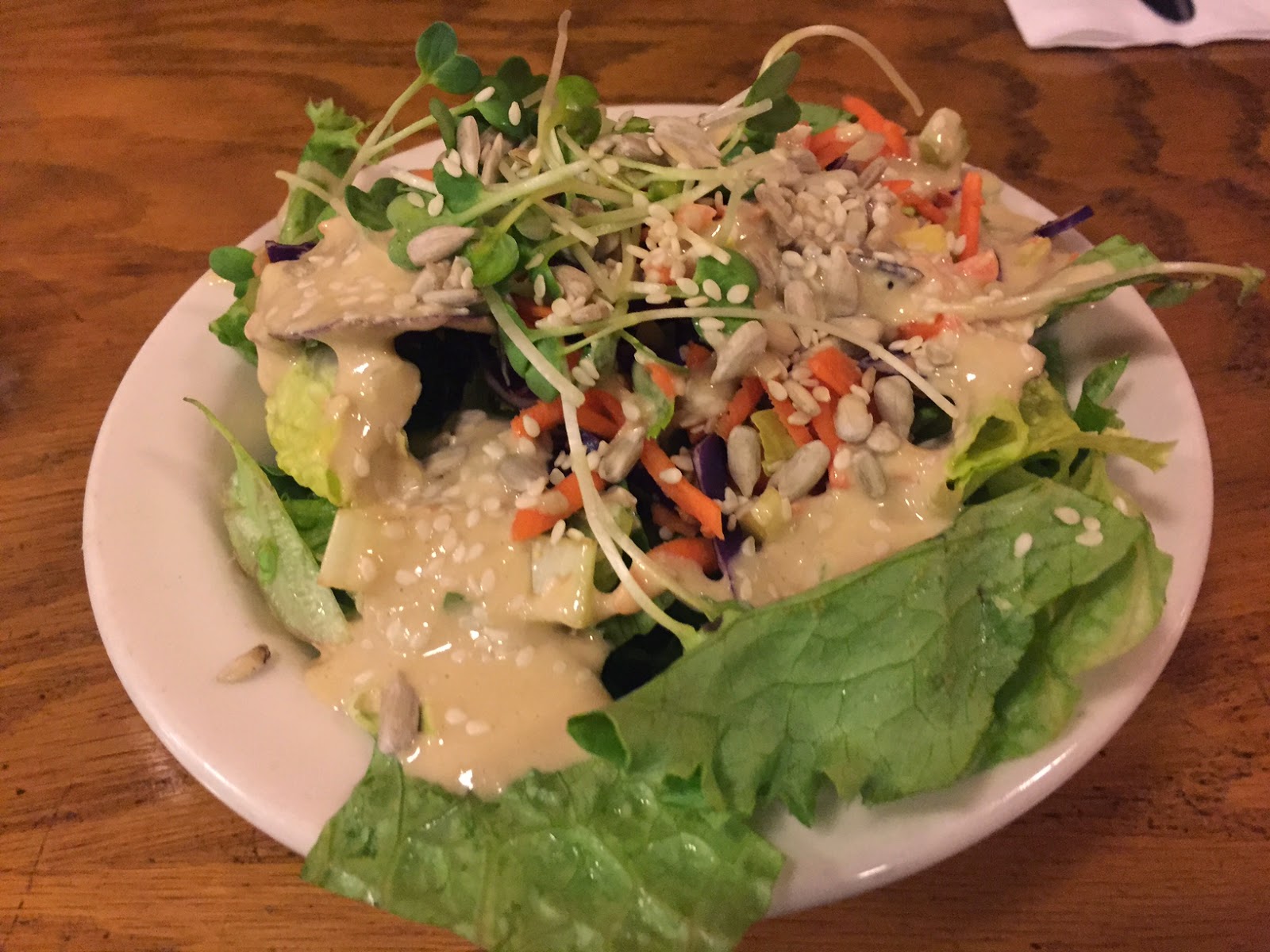 And a Scuttlebutt Brewing Company Porter. Love me a good local porter. 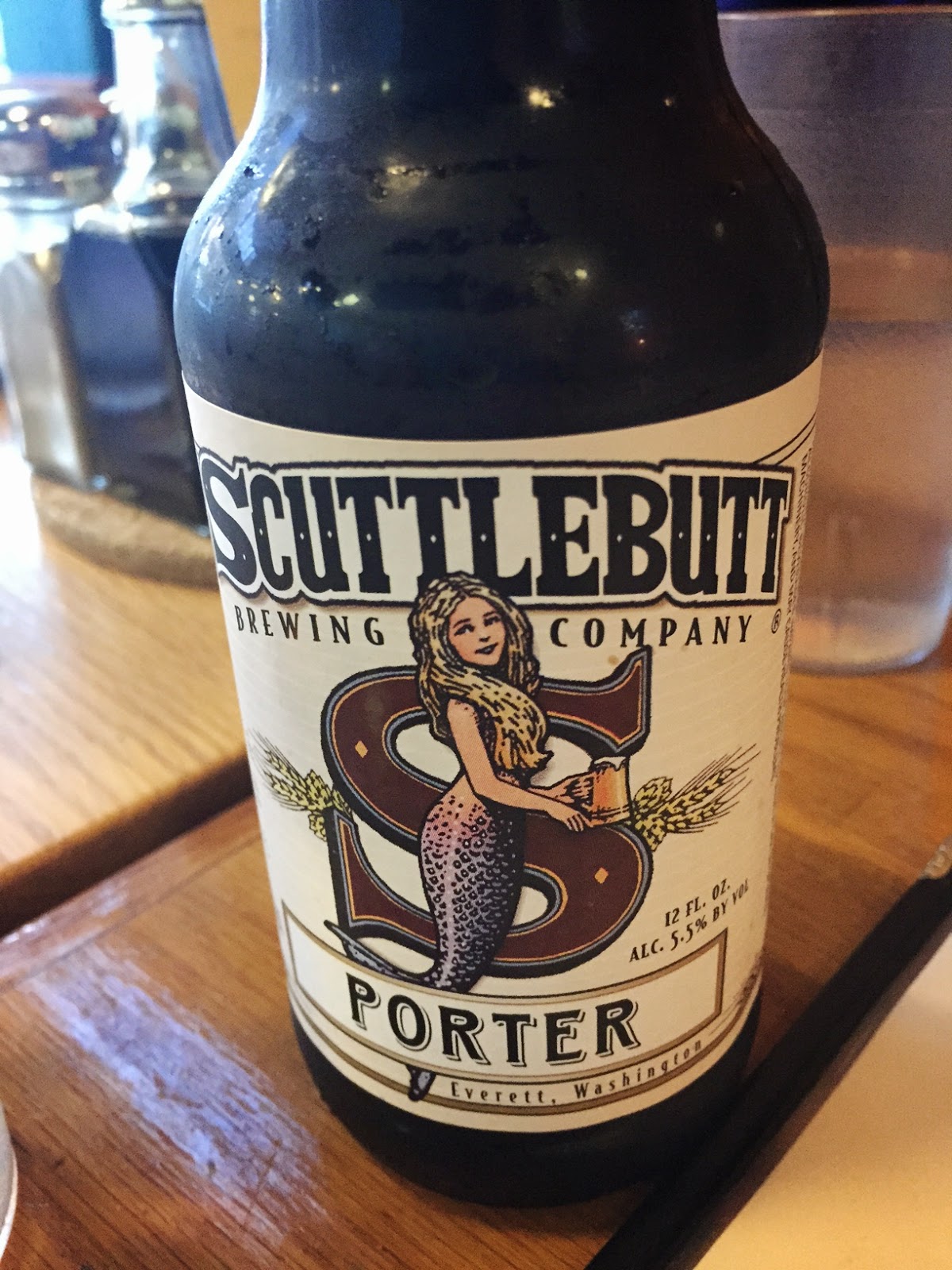 Later Saturday night, Rhiannon, Phorest, and I wandered around the Lower Queen Anne neighborhood of Seattle (near the hotel) and stopped into a bar called Solo for a glass of wine. And then we hit the hay early to do it all over again on Sunday!

Sunday morning started with a Hazelnut Soy Latte from Uptown Espresso, another coffeehouse near the hotel. This place got bonus points from me for being dog-friendly. There was an adorable giant poodle at the counter with his human. And they have a special foam called "Velvet Foam," which they were able to do with soy. Made for a super-creamy latte. 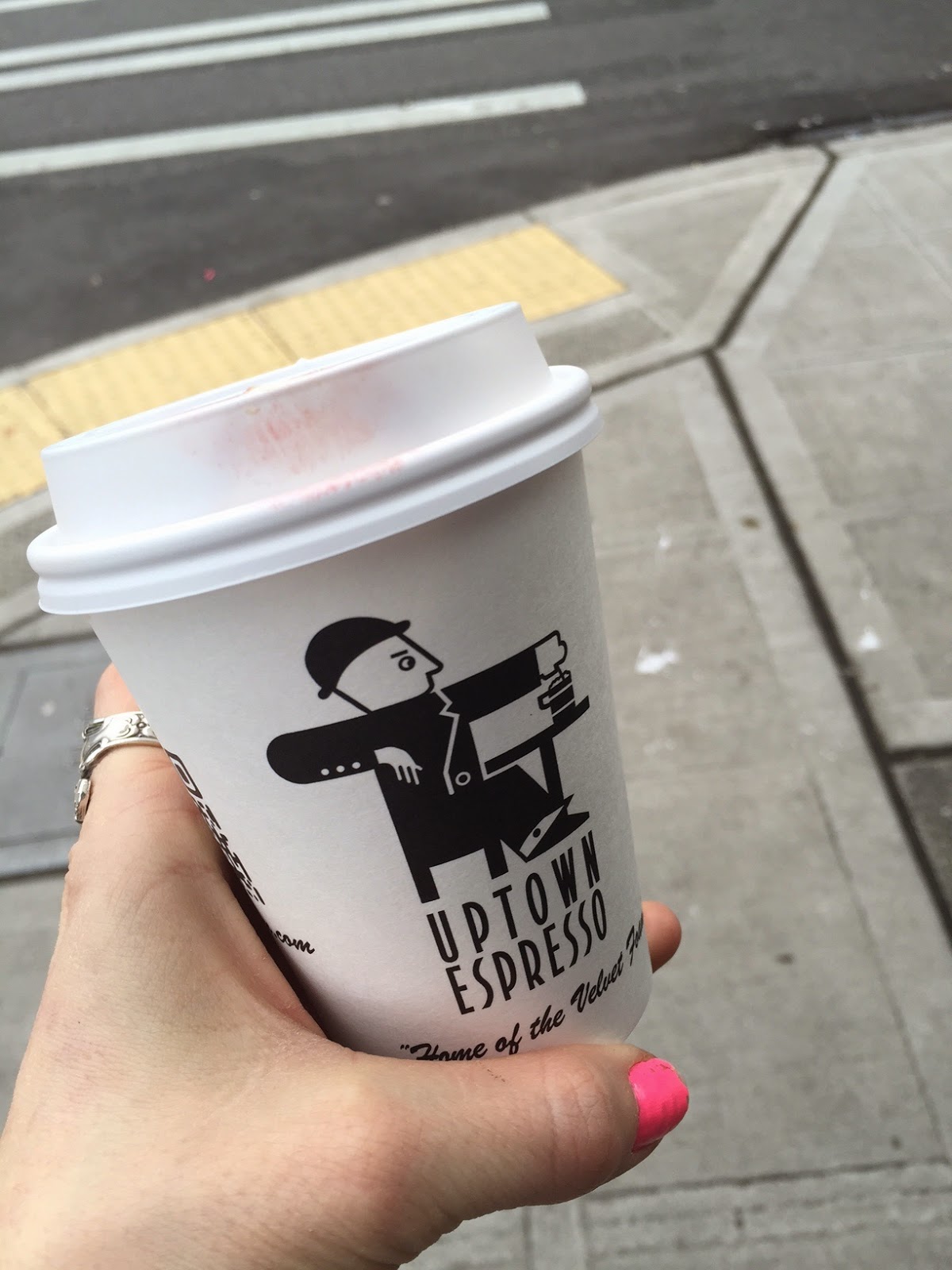 On the walk to the Seattle Center Exhibition Hall, where VegFest was held, I snapped a quick selfie with the Space Needle. 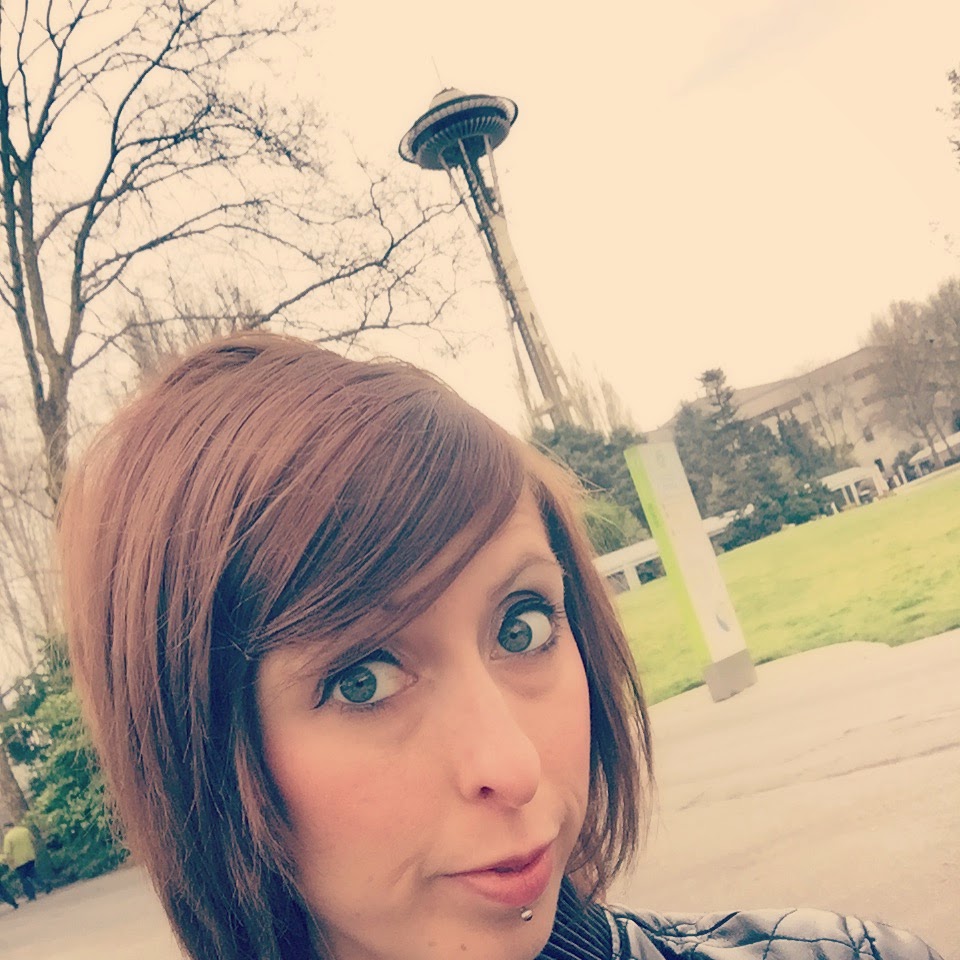 Then I headed inside to set up for Sunday's demo — Vegan Deviled Eggy Bites. Here's my table all ready to go! 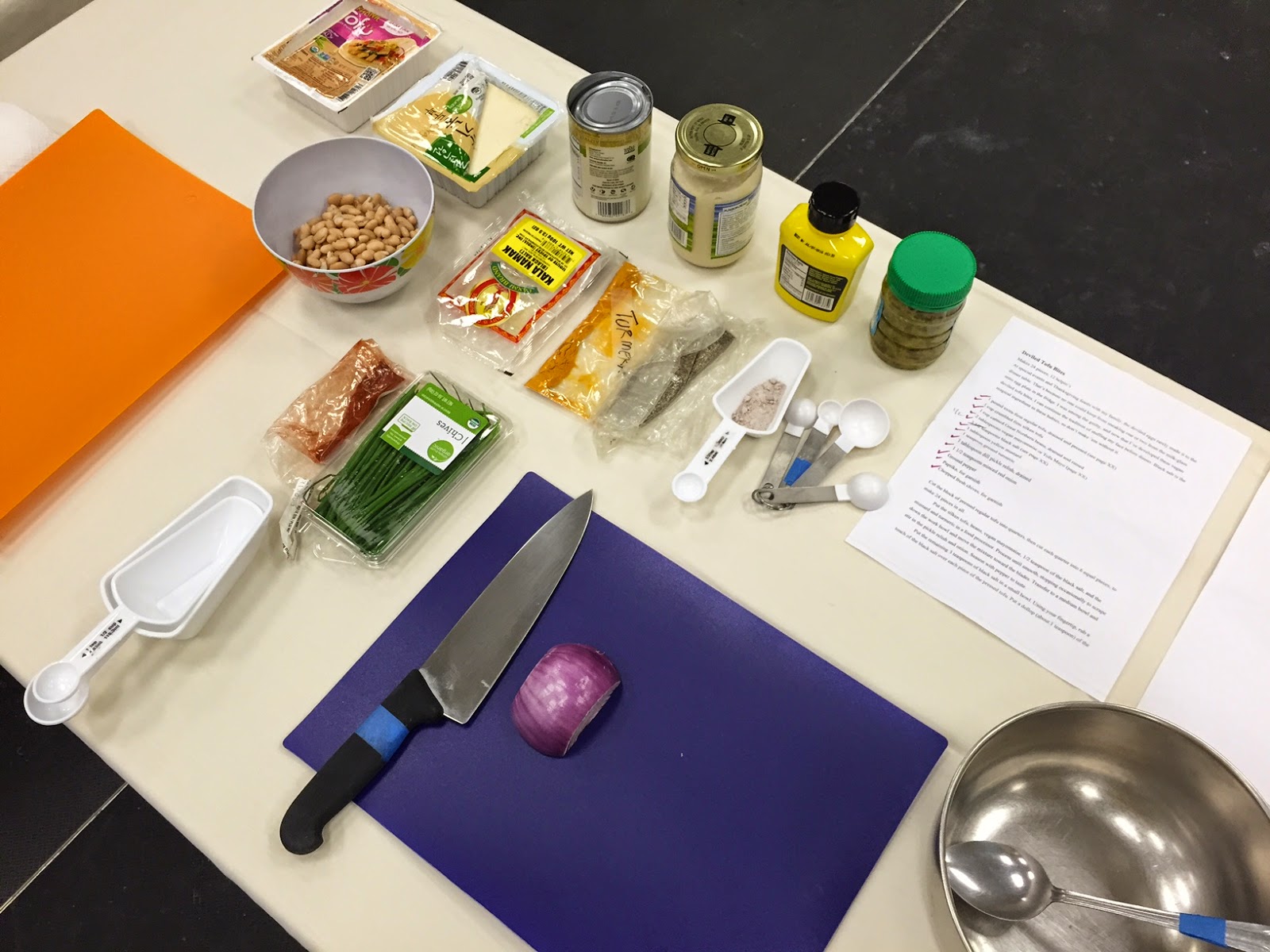 After my demo, I sat at the signing table to sign copies of Cookin' Crunk again. And guess who I saw? Jess of Get Sconed! She was handing out flyers for the Vida Vegan Con Bazaar in Austin (it's May 29th!!) 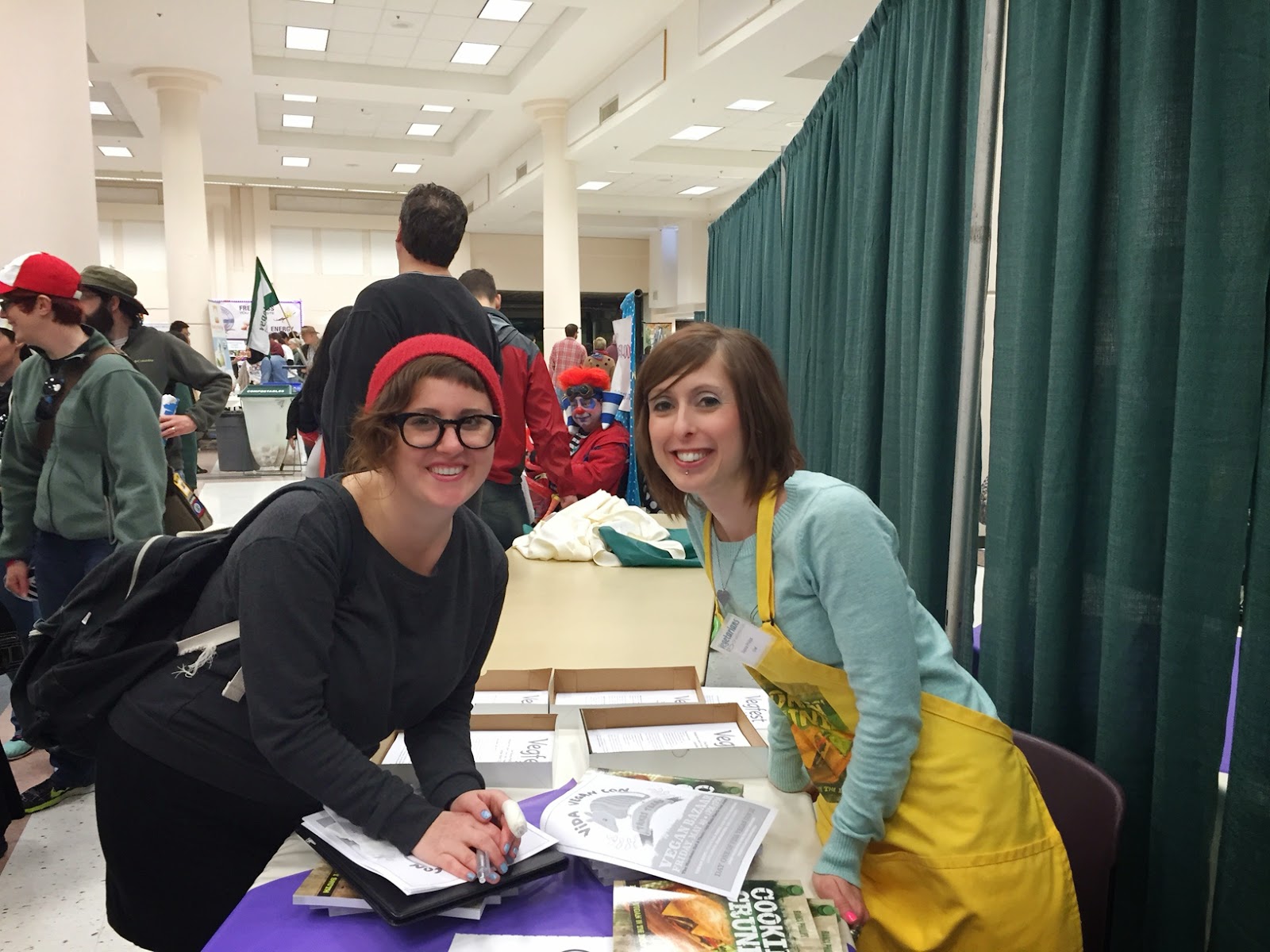 I actually saw Vida Vegan Con organizer Michelle Truty at VegFest on Saturday, but I didn't ask for a picture because Michelle isn't that into being photographed. It was great seeing my Portland VVC pals in Seattle!

After signing books for about an hour, I was famished. I knew from last year that Plum Pantry (Plum's Bistro's fast-casual little sister) was located right behind VegFest in the Seattle Center Armory building. So I walked over there for this Buffalo Seitan Salad. Sadly, they were out of croutons, so my salad just had fried seitan, caesar dressing, and buffalo sauce. Still delicious. 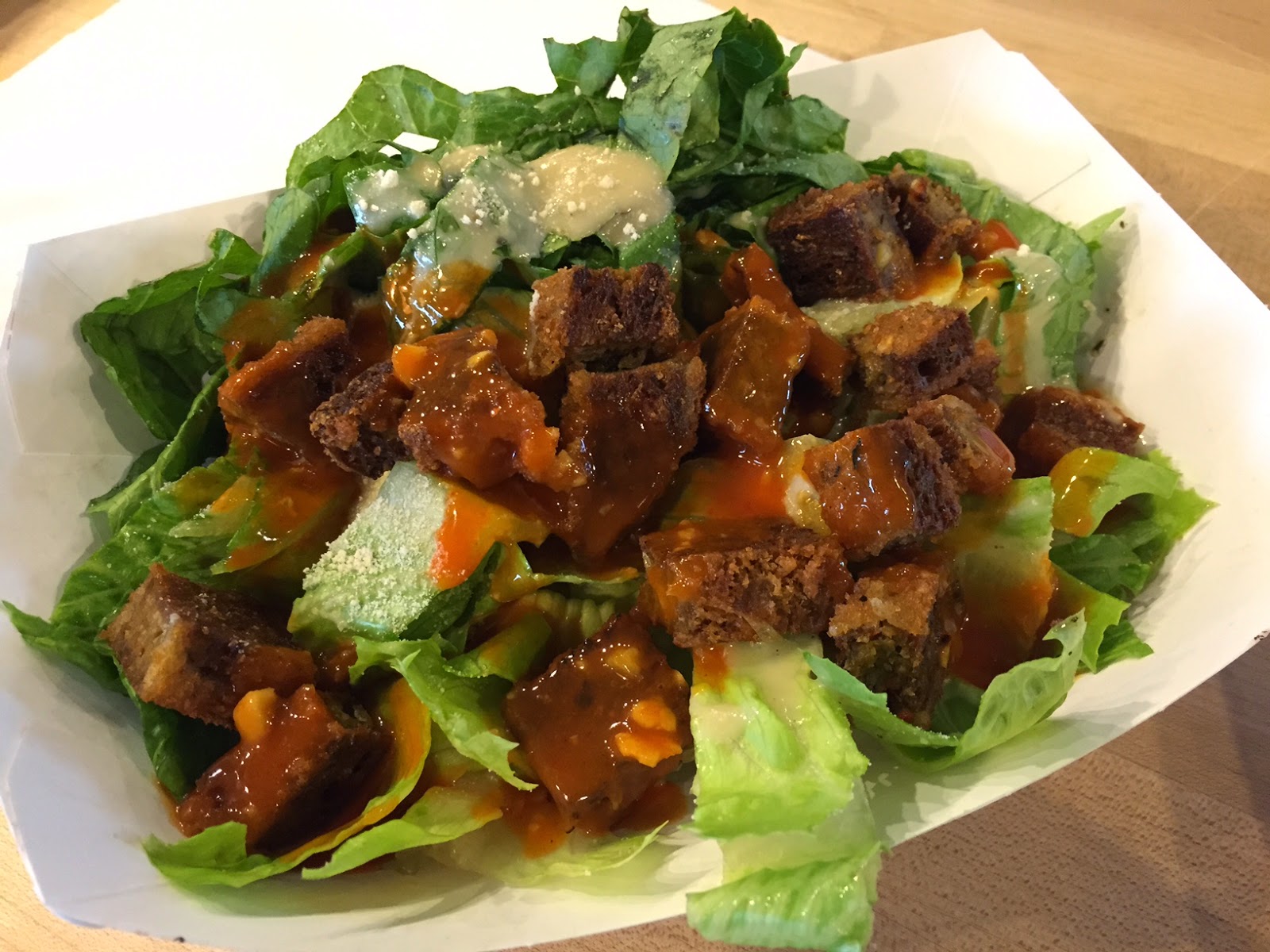 I was trying so hard to be good and order salad, but then I saw Plum Pantry's desserts. I could not resist this Vegan Cookies & Cream Brownie. It's all about balance, right? 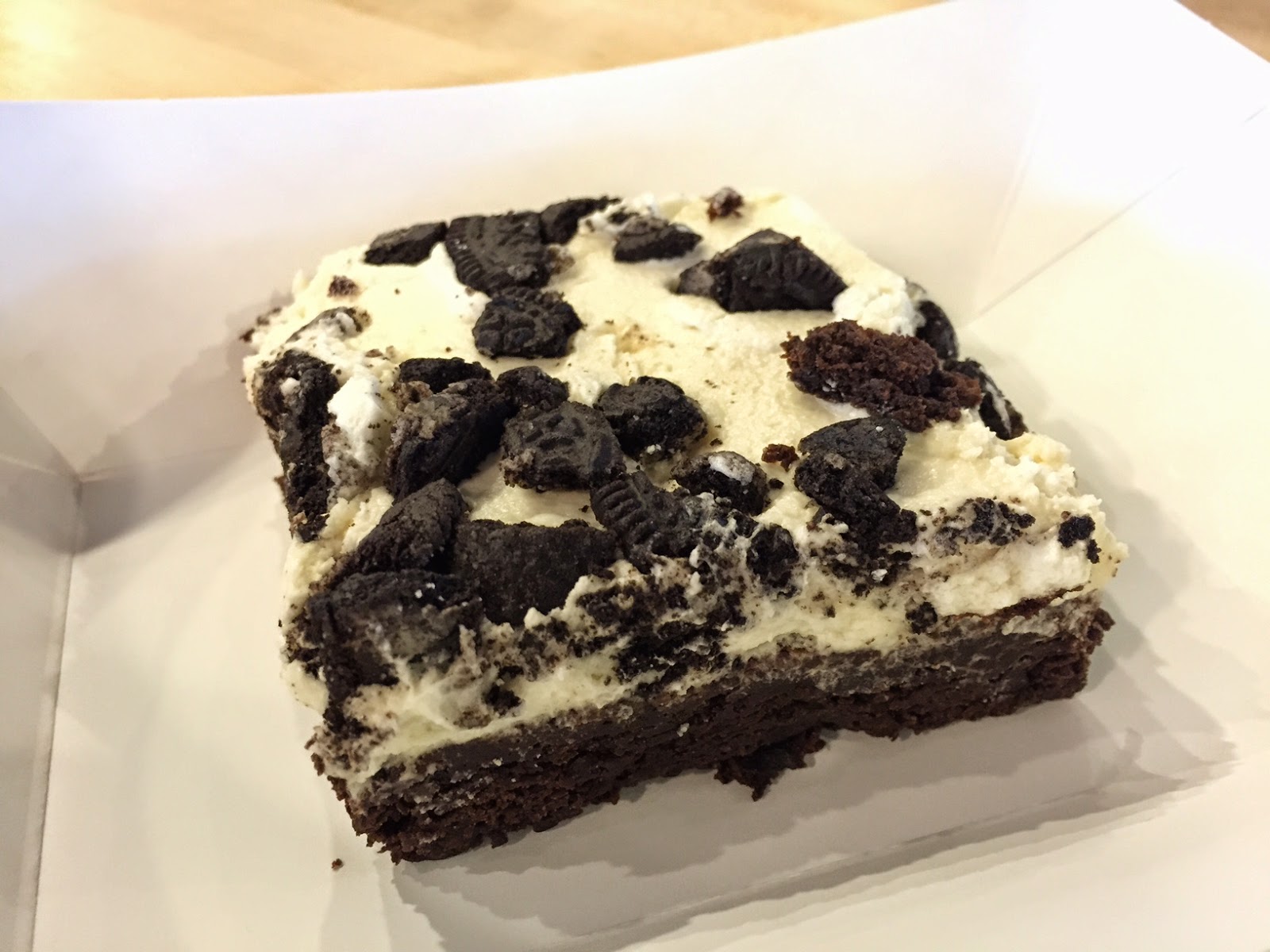 After lunch, I headed back to VegFest and spent the day hanging out at the BPC table. After it was over, I hopped in a Lyft car and headed to the University District for some shopping at Vegan Haven, an all-vegan grocery store that donates part of its proceeds to the Pigs Peace Sanctuary. Look what I saw on the cookbook shelf! They had my book for sale! 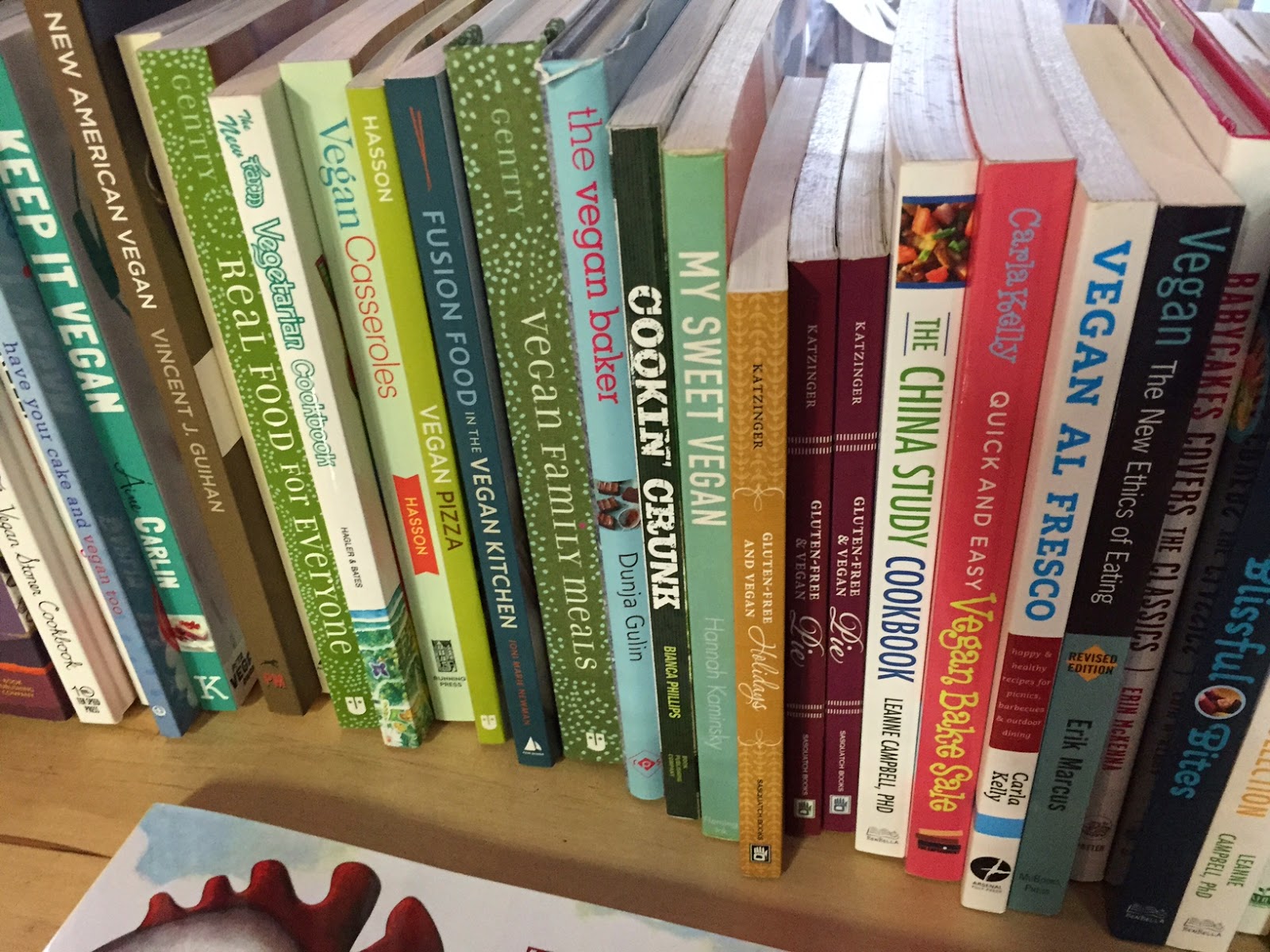 I had dinner plans with my Seattle buds, Dawn and Brit, both of whom I met at the first Vida Vegan Con in Portland in 2011. I make plans with them any time I'm in the area. We settled on dinner at Wayward Vegan Cafe, which has a new classier location with liquor! Sadly, Brit wasn't feeling great and couldn't make it. But Dawn was there! For some reason, I forgot to take a picture with her. But I didn't forget to photograph what I ate at Wayward. Typical food blogger prob — all food pics and not enough people!

Anyway, I started with a Vegan Bloody Mary! 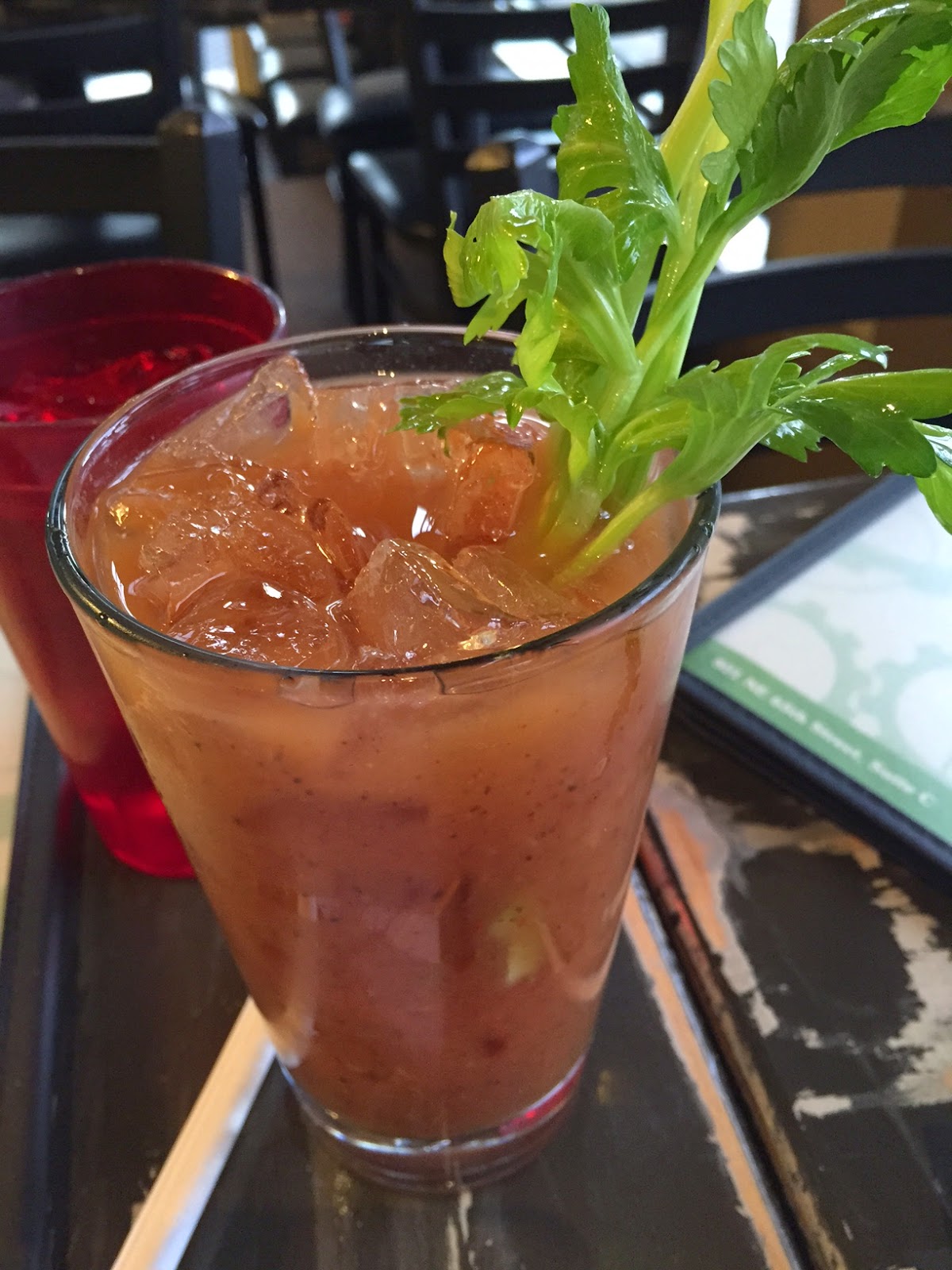 Wayward's all-vegan menu is huge and filled the kind of comfort food I love. Making a decision on what to order was HARD! But the server suggested the Country Fried Steak Platter — two breaded and fried seitan patties with country gravy, two potato pancakes, and garlic kale. This was freakin' amazing. 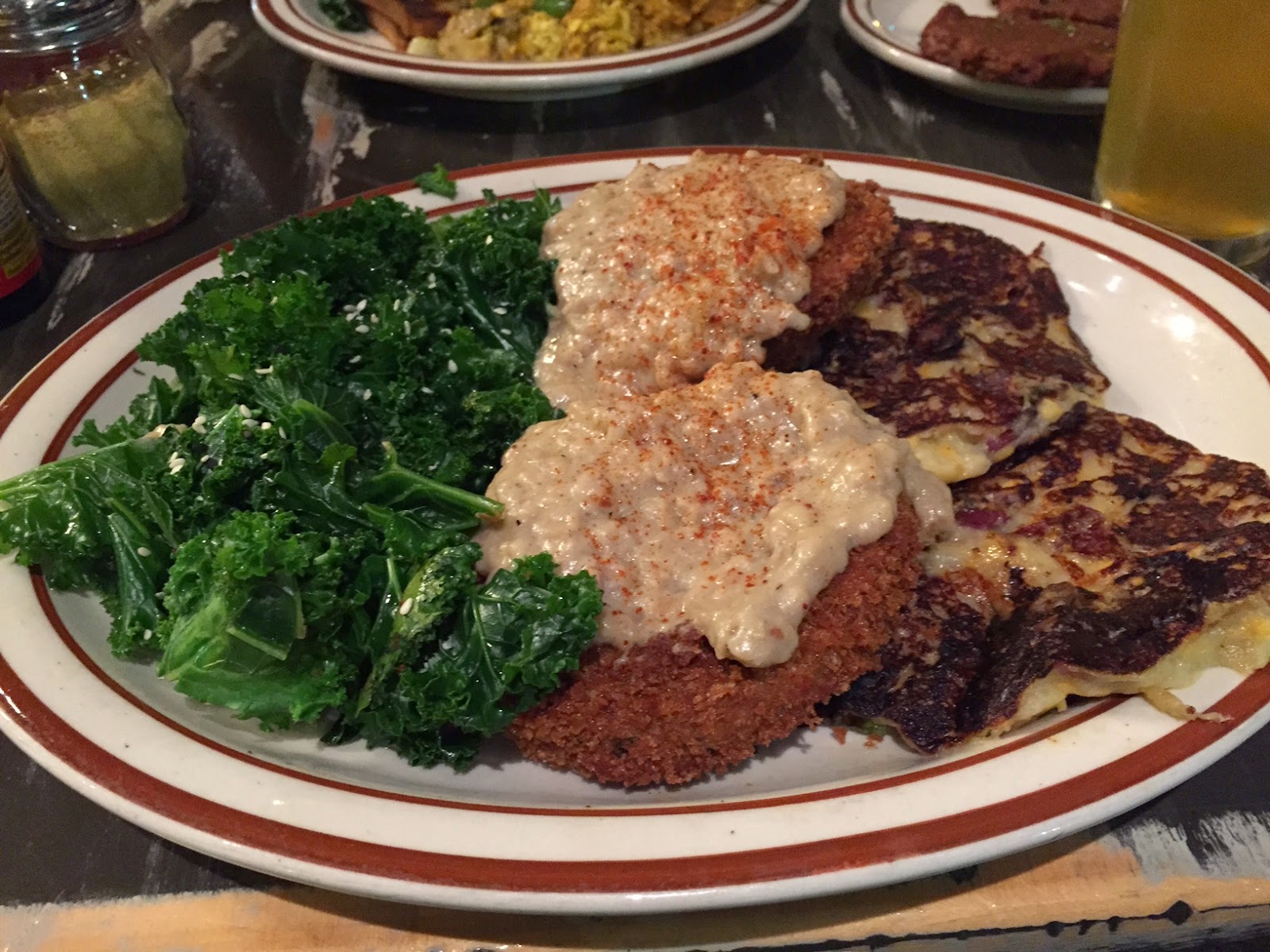 I had planned to order another meal to take back to the hotel room and heat up for breakfast. But I ended up having about half this platter left. So I just got one of Wayward's fluffy herbed biscuits (with a side of jam!) to go. The next morning, I stuffed the leftover country fried steak inside the biscuit and topped it with jam for a yummy breakfast sammy. 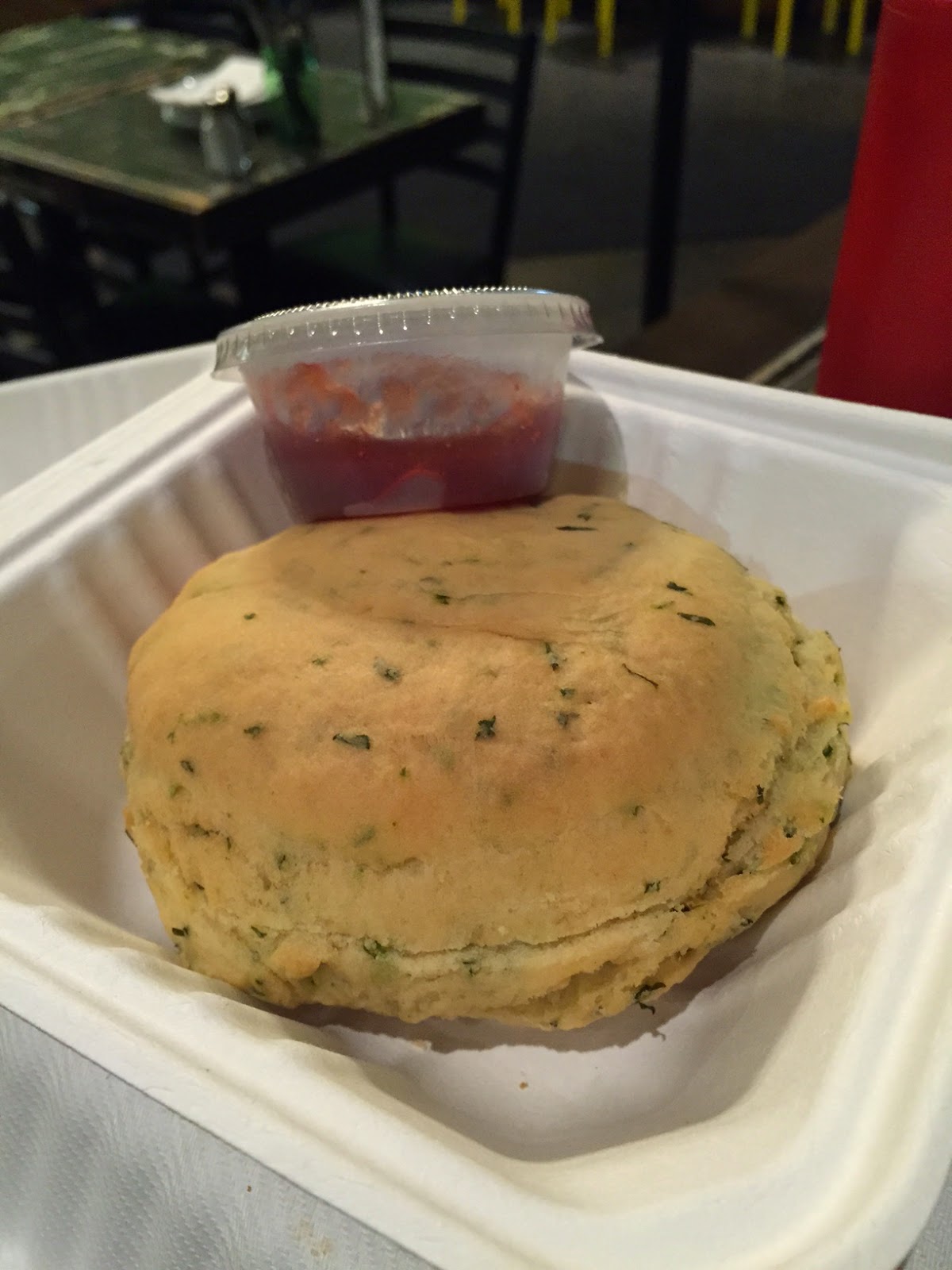 After dinner, Dawn showed me the awesome, very vegan-friendly Central Co-op grocery store by her apartment. I got some Sjaak's Easter chocolates to take home!

Whew! Well, that was a massive post. And I still have one more Seattle post to go. I'll be back tomorrow with the last day wrap-up (plus, a bonus day in Chicago).
Posted by Bianca at 11:05 PM

Seattle is the very best. I really hope I can go there for VegFest one year.
I love Wayward so much, I am so excited to go and eat at their new location when I am there in June. So good!

Also,that Vtopian Artisan Cheese sounds out of this would. I hope they come to VVC!

Wow, it's a small world! I totally recognize Heather from one of your pictures - she was at our local vegan potluck on Whidbey Island last weekend!